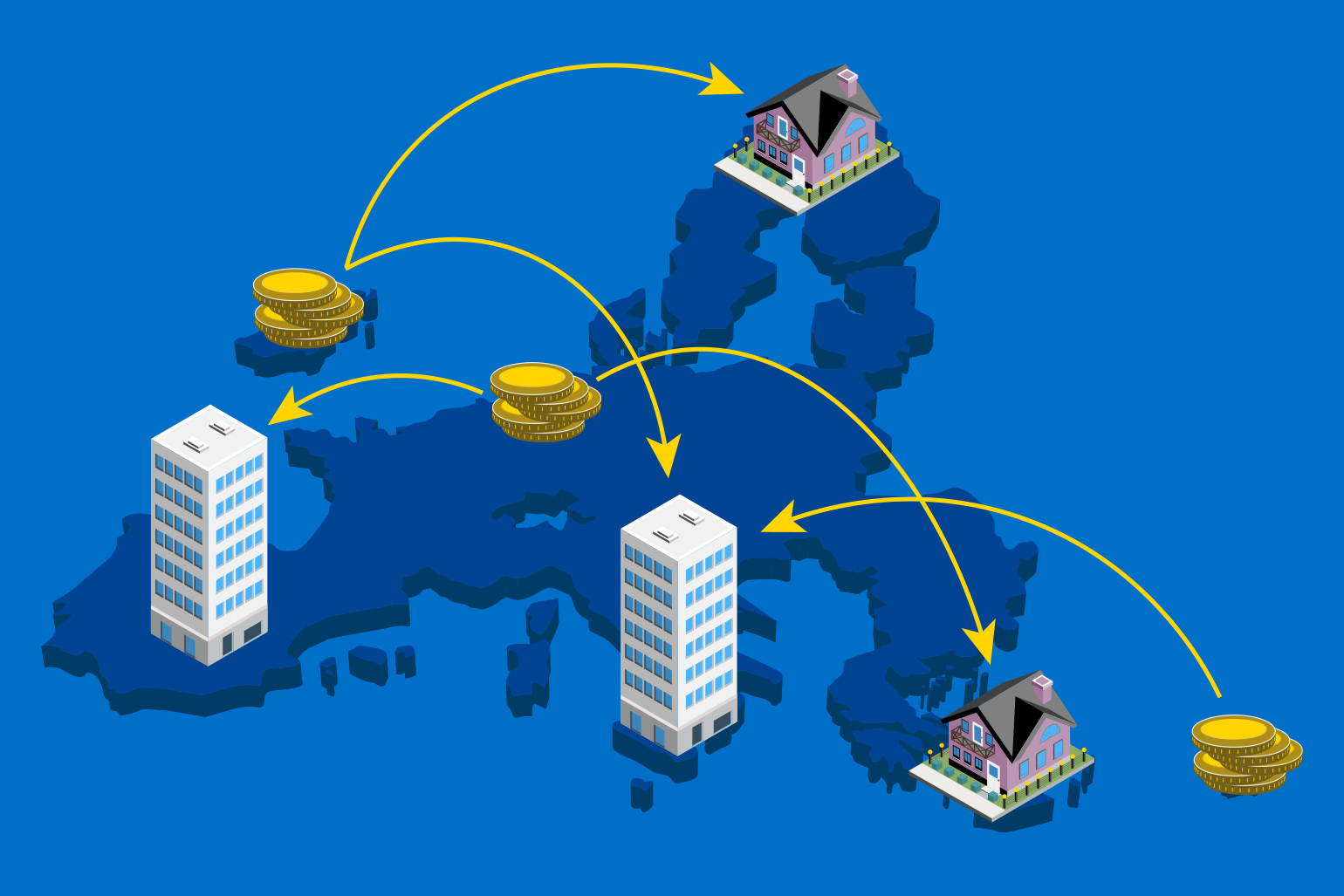 Europe is strongest when united. This year, Europe showed that solidarity over the Covid-19 pandemic; the ESM became part of the response with loans called Pandemic Crisis Support.

We have enjoyed the economic benefits of a single market for goods and services for nearly 30 years. But a united market for savings, investments, and capital raising in the European Union (EU) has so far proved largely elusive. The EU remains 27 capital markets, with cross-border finance hampered. This lack of an EU capital markets union is more than an inconvenience: it weakens Europe’s businesses and households.

With the United Kingdom’s EU departure in January, the region lost its largest capital market. The need to unite Europe’s capital markets is now more crucial than ever to avoid leaving the EU reliant on financing from a jurisdiction whose rules may well start diverging from Europe’s in the medium term.

Added to that, the European economy faces a sharp recession caused by the Covid-19 pandemic. While capital markets union may only take shape once the recovery is underway, overcoming market segmentation will be decisive to securing the financing necessary to bounce back robustly from a shock whose economic impact will last for years.

Europe will have to raise vast amounts of money to tackle the immediate effects of the crisis and an EU-wide recovery fund largely financed via capital markets is being debated. At the same time, Europe is pursuing a transition towards a green and digital economy to provide sustainable economic development. To achieve the objectives, Europe will need strong capital markets. It is the right moment to reboot the capital markets union debate launched in 2015.

To recommend practical solutions to address these challenges, a High Level Forum, convened by the European Commission in November 2019, reported its findings on 10 June. The ESM is excited to have participated in the High Level Forum and supports the report’s recommendations.[2]

In this blog, we identify five key areas, the “5 S’s” that will be crucial for the success of capital markets union, and we will elaborate on these later.

What will hold Europe back in a recovery?

For recovery and prosperity to return, firms that have been wrecked by loss of business during lockdowns need fresh capital. To secure finance, companies will struggle because their equity value has fallen, they are more leveraged or their business prospects are uncertain. In the recovery, we need public finance to tackle the impact of the crisis. But we also need private finance – yet that will prove difficult to achieve if Europe’s capital markets remain fragmented along national lines.

Europe relies on its banking sector for financing its economy, which has its merits. However, as the last crisis taught us, there is value in having alternative channels of financing available to firms to alleviate cash constraints and support financial stability. Firms, especially small- and medium-sized enterprises (SME), often need alternatives to loans. 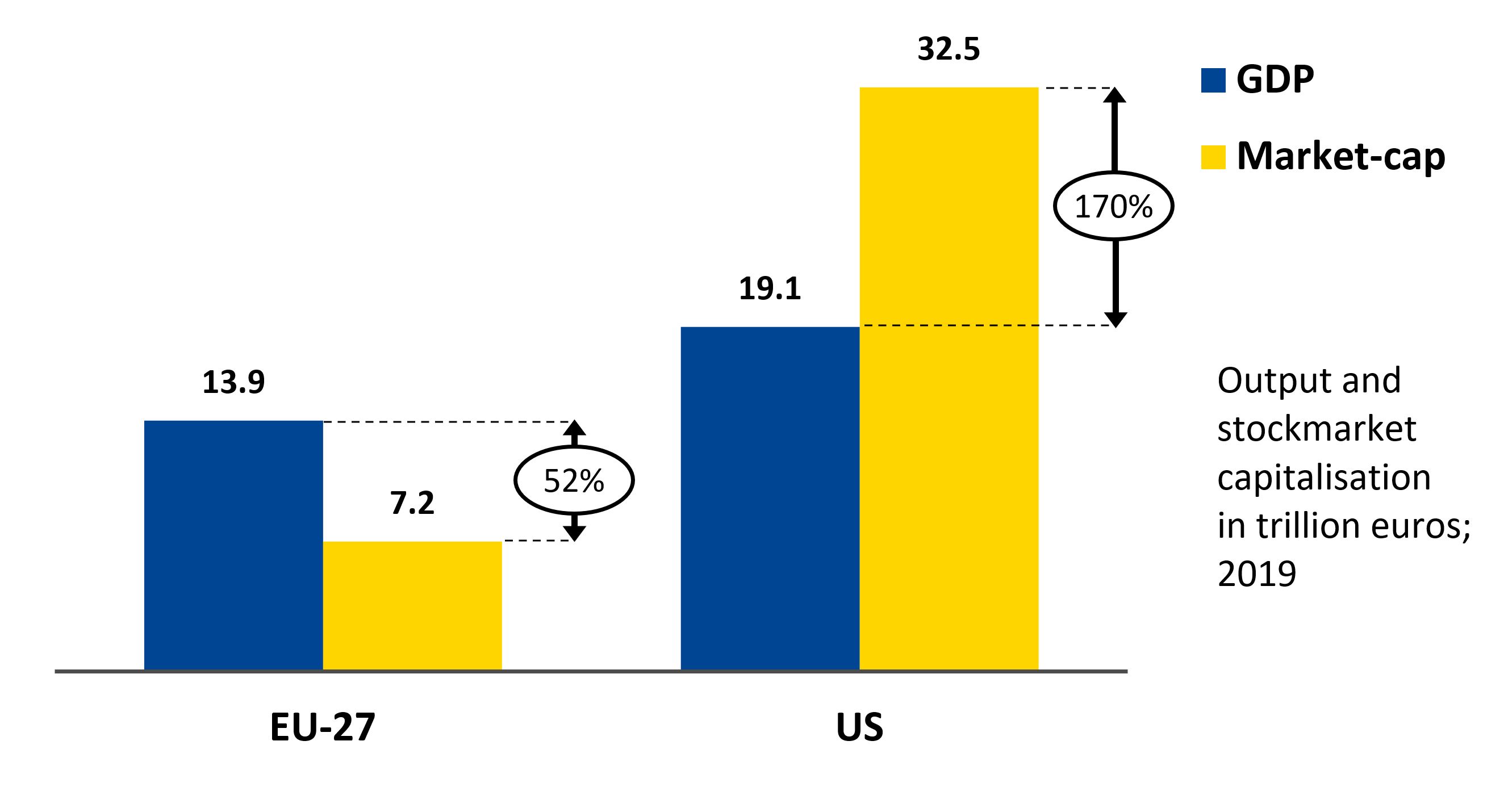 Finally, size matters in the international financial system – and even more so in an international environment that has again become more polarised. Offering sizeable and deep capital markets attracts foreign investors. Beyond equities, the US benefits from a much larger pool of safe assets through the US Treasury market. This supports the strength and the value of the dollar. Being able to trade in your currency opens markets and avoids risks for companies. A strong international role of the euro would offer stability and economic advantages to Europe.

A total of 17 key recommendations for capital markets union are in the High Level Forum’s final report.

In our view, five of them are capital markets union “game changers”, with other recommendations being important enablers. 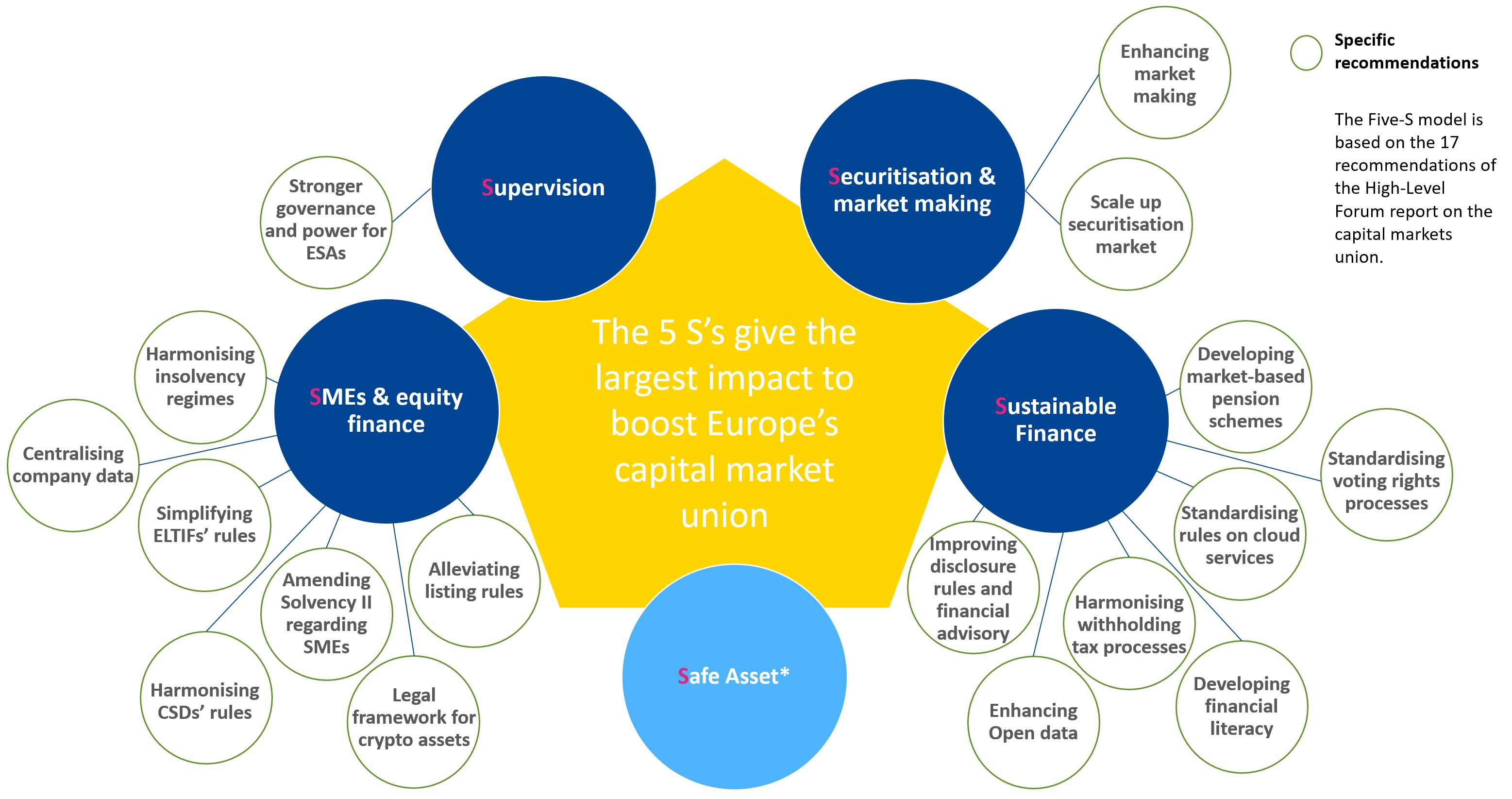 The ECB Single Supervisory Mechanism (SSM) was a game changer for Banking Union; strong European supervision for markets will be the same for capital markets union. A single rulebook for supervisory practices is a pre-requisite for an integrated well-functioning capital markets union. Unified supervision will create a level playing field for market participants and ensure better consumer protection. The two European Supervisory Authorities for capital markets and for insurance activities should benefit from wider powers to enhance European supervisory convergence, on the same basis as the SSM for banks. A smart split could involve large cross-border players supervised at European level and domestic players at national level. Like the SSM, that combines the best of both worlds with a European supervisor and national regulators.

2. Sustainable finance – green, social and creating value for all

Europe is leading in the development of sustainable finance that includes Environmental, Social and Governance (ESG) standards. The euro is the leading currency globally for sustainable and green finance on the capital markets with 45% in euros versus 26% in US dollars. Yet the sector remains small and green finance requires a significant expansion.[5]

Figure 3: Almost half of global sustainable capital markets finance is denominated in euro 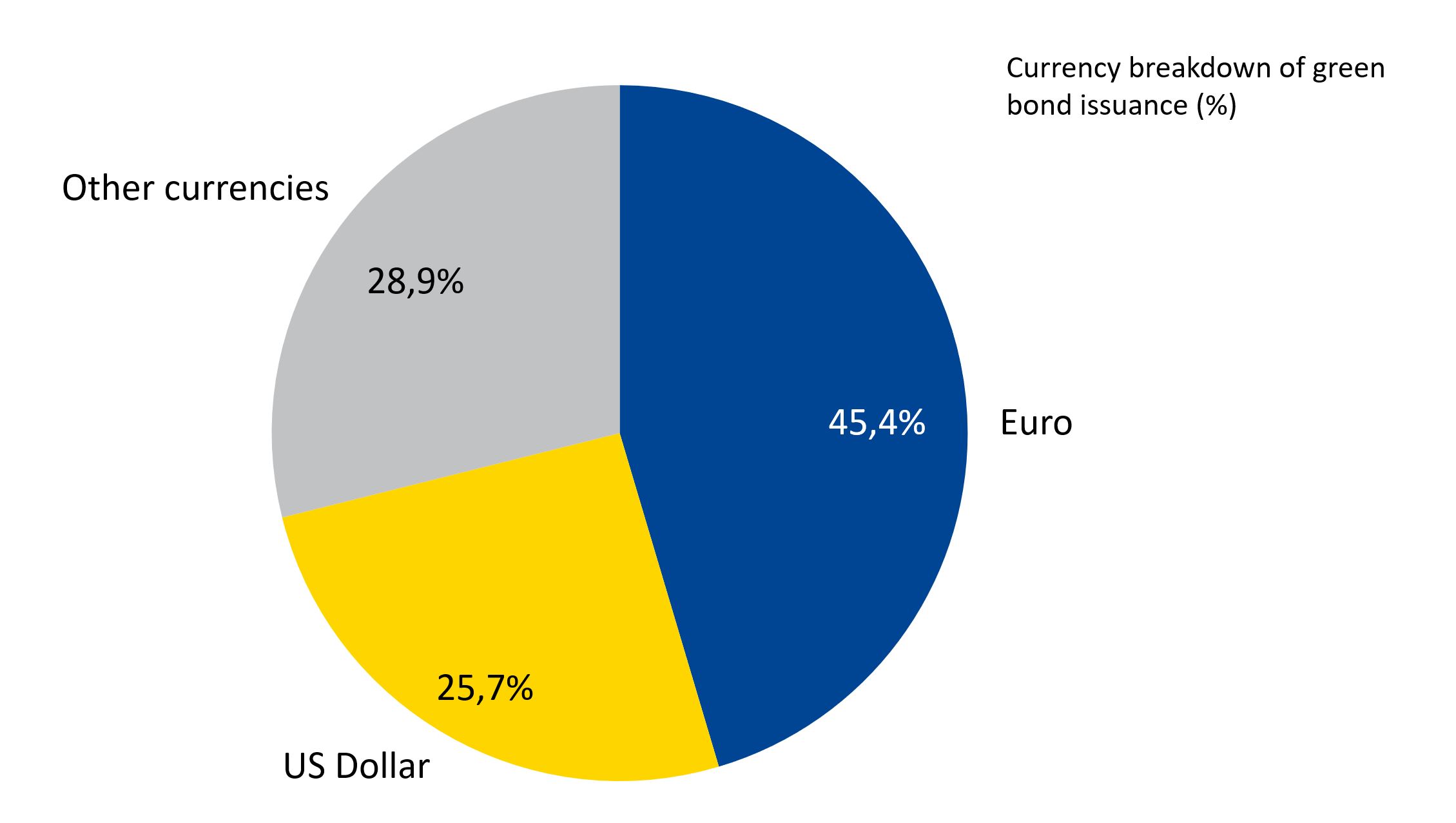 If Europe is leader in the environmental factor, it needs now to develop the social dimension, as emphasised by the Covid-19 crisis. By becoming the global hub for ESG finance, Europe could boost its capital markets and promote the international role of the euro. The EU Green taxonomy is an important step in that direction.

Social means also opening up capital markets to citizens. Enhancing market-based pension schemes on top of state-ruled systems can for instance ensure complementary income for retirement. This requires of course a higher level of financial literacy and strict rules for transparency and investors’ protection. Simplifying tax processes and setting the right tax incentives are necessary as well. This goes beyond the ecological finance, but reaches the best-in-class, ethical and transparent finance that is sustainable for the prosperity of future generations.

In the wake of the 2008 financial crisis, securitisation declined dramatically in importance, particularly in Europe where the market was less structured and mature than in the US. Securitisation was held responsible for amplifying risks related to underlying assets.

However, when properly designed and monitored, securitisation remains a powerful technique to share risks more equally between banks and markets and create more investment opportunities. Securitisation can free up lending capacity of banks, allowing them to deleverage. Here Banking Union and capital markets union are complementary. De-risking banks will also help Europe move ahead with a deeper integration of the banking sector.

Reviving the securitisation market in Europe and enhancing market making will require some harmonisation of national insolvency laws to increase visibility on enforcement and repossession procedures to protect investors. Improving existing rules related to the prudential treatment of securitisation transactions may help as well.

Additionally, reinforcing market making is important. In crises, we see foreign banks shy away from Europe. For a strong capital markets union, you need a strong market making activity in Europe.

SMEs are at the heart of Europe’s business model. Europe has a rich culture of start-up companies in innovative areas – companies working in IT and artificial intelligence, media and bio-tech. Unfortunately, they lack opportunities in Europe to become global champions. With London exiting the EU capital market, we lose the most important European hub of start-up finance. Access to sizable capital for the scaling up of small innovative firms to bigger companies is a notorious problem in European capital markets. Europe has implemented a recognised legal framework for listed companies aimed at promoting transparency. However, the resulting legal requirements turned out to be too heavy and costly for SMEs and start-ups, deterring them from going to public markets. Here again, some exemptions for SMEs could be envisaged. Making it easier and more transparent, say, for a Belgian retail investor to invest in a Greek SME would be a game changer for capital markets union.

This is a big theme. In the High Level Forum on capital markets union we have seven specific recommendations, from harmonising insolvency regimes to centralising company data. And simplifying rules for Central Securities Depositories to alleviate listing rules. This all should boost SME and equity finance, also from retail capital market investors and reduce dependency on bank finance.

Finally, there cannot be a fully-fledged capital markets union without a common safe asset. This remains understandably the politically most controversial and difficult part. But reality is that all well-functioning capital markets throughout the world have a reference or safe asset in which value can be stored and against which all other financial instruments can be priced and compared. A European safe asset would help stabilise the monetary union. Bigger and deeper markets offer more liquidity and better hedging opportunities and, therefore, attract more investors.

We already have €800 billion of European safe assets in the market. The recent announcement of EU-backed bond issuance to finance a recovery fund, if politically approved, could potentially add another €750 billion. That’s in addition to the €540 billion package of counter-Covid-19 measures from the European Investment Bank, the ESM, and the European Commission.

A European safe asset with a large market size like US Treasuries can only be achieved over time. But we can be optimistic, we are moving step-by-step to a larger volume of European safe assets. With the COVID19 crisis response, we might reach €2 trillion of European Safe Assets in the market. Increasing the number should remain an aspiration for the future. This would be the biggest game changer for capital markets union.

Out of the Box: A new ESM for a new crisis
Euronomics: The building blocks of recovery
Regling’s Take: Why we need to boost the euro’s international role
The time for solidarity in Europe is now – a concerted European financial response to the corona crisis
Out of the Box: Investing in a better tomorrow
Helping people, businesses and countries in Europe
A new Vision for Europe’s capital markets