Klaus Regling in interview with To Vima (Greece), May 2021

Klaus Regling in interview with Skai TV (Greece) May 2021 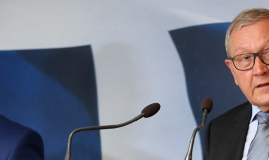 Greece put the crisis behind it on 20 August 2018, when it emerged from the largest financial assistance package in history. On that day, Greece ended its ESM programme - after eight years of receiving loans from the ESM, EFSF, IMF, and euro area countries.

Together, the EFSF and ESM disbursed €204 billion to Greece, and now hold more than half of its public debt. The programmes enabled Greece to tighten its public finances, take steps towards repairing and modernizing its economy, and regain the trust of investors, which it had lost at the start of the crisis.

In the past eight years, Greece worked hard to meet the conditions that came with the programmes. Tough reform was needed, as wage rises had outpaced productivity gains, and Greece had lost the ability to compete with other countries. The government drastically reduced spending, and put in places hundreds of other reform measures. The number of civil servants fell by 25 percent, and public sector wages dropped by 30 percent. This brought many hardships for the Greek people, and led to frequent protests.

Now, these programmes have started to bear fruit. The economy is growing again, and unemployment is falling. After many years of painful reforms, Greece’s citizens are seeing more jobs opening up, and standards of living are expected to rise. Of course, the government must continue the reform policies that have brought about these successes. Only an unwavering commitment to economic modernisation can bring lasting success in Greece.

At the same time, Europe is also doing its part. Conditions on the loans from the EFSF and ESM are much more favourable than those in the market. This saves Greeces around €12 billion every year, or 6.7 percent of its economy: a substantial form of solidarity. This comes on top of a series of debt relief measures the country already received in the past. In 2012, the private sector cut the value of its debt holdings by more than €100 billion. The public sector followed suit later that year, easing the conditions of its loans to Greece. In 2017, the ESM put a further package in place, the so-called short-term measures. This will reduce Greece’s debt-to-GDP ratio by an estimated 25 percentage points by 2060, and gross financing needs by 6 percentage points. And more is to follow. The next round of debt relief – the so-called medium-term measures – is expected to slash an additional 30 percentage points off Greece’s debt-to-GDP ratio by 2060, and a further 8 percentage points of the country’s gross financing needs. None of this official sector debt relief will include any nominal haircuts, or transfers of funds.

For the long term, Greece’s euro area partners have made an unprecedented commitment. In 2032, they will review whether additional debt measures are needed to keep Greece’s gross financing needs below the agreed thresholds. If this is not the case, Greece could be granted further debt relief measures.

Greece was a special case during the euro area crisis. It had to cope with greater difficulties than the other four programme countries. Another problem was that the administration was less effective than elsewhere. And finally, there was a policy reversal in the first half of 2015, which cost the country a lot of time and money.

Greece has already repaired some of the damage, and was able to issue a number of bonds this year. And it is leaving the programme with a substantial cash buffer – enough to refinance itself for almost two years. The challenge will be to regain the trust of investors on a sustainable basis.

The fact that Greece is leaving the programme does not mean it is now on its own. The ESM will be closely involved in Greece’s future, along with the other institutions. Jointly, we will check that the country is living up to the commitments it has made to the euro area, such as the targets for its primary surplus and continued economic reform. As its largest creditor by far, our interests are aligned with those of Greece: we want Greece to thrive. An ESM team will regularly visit the country as part of our Early Warning System, monitoring the economy and Greece’s ability to pay back its loans.
In 2018, the Greek people finally began to emerge from a long period of hardship. The work is not over yet – but the conditions for a better future are in place. During the past eight years, Europe stood by Greece’s side. It is a long-term partner for Greece. That will not change – because Greece is an essential part of Europe.

Weighted average maturity of loans: 32.35 years (after repayment of €2 billion).

1 The ESM issued floating rate notes for the purposes of funding bank recapitalisation/resolution. Notes amounting to €5.4 billion were disbursed to Greece; the remaining €4.6 billion was not used and the notes were subsequently cancelled. The amount was disbursed pro rata in ESM floating rate notes listed above.

Euro area Member States provided the first financial assistance package to Greece, supplying €52.9 billion in bilateral loans under the Greek Loan Facility. EFSF financial assistance, part of the second programme, ran from March 2012 through June 2015. In this programme, the EFSF disbursed a total of €141.8 billion, of which €130.9 is outstanding.

€203.8 bn
Total amount disbursed to Greece by EFSF and ESM