The EFSF and ESM lending rates aim to fully cover their funding and operational costs and reflect the varying risk profiles of each funding instrument.

The ESM and EFSF have used different funding and lending approaches over time for the following reasons:

The ESM and EFSF cost of funding rate is a daily per annum rate. This rate reflects the cost that one of the two rescue funds is liable to pay on a given day to investors who hold ESM- or EFSF-issued instruments. The cost of funding rate is derived from a daily computation of the actual interest accrued on either all issued debt in the respective pools of the ESM and EFSF. Each rescue fund, therefore, has its own funding rate.

The rescue funds also calculate the overall cost of lending to each programme countries, the ‘blended lending rate’. It is calculated as a weighted average interest rate including the lending costs of all the loans to the programme countries, not only pool funded loans, expressed in one single rate. The rate covers the cost of funding for pool-funded cash disbursements, but also the back-to-back funding rates, the disbursements in kind, and the fees and margins charged for the assistance under each loan. As the structure of disbursements differs across the individual countries, the lending rates may vary as well.

The evolution of the blended lending rates by country can be found below.

When the EFSF started its activity, it financed loans to Ireland and Portugal through fixed-rate bond issuances on a back-to-back basis. These loans were more expensive at the outset, given a higher interest rate environment at the time, substantially higher margins charged to borrowers than at present, and the fact that the EFSF was a new issuer in the market. From December 2011, after the approval of the diversified funding strategy, the EFSF progressively moved to pool-funded loans, which were initially financed by short-term bills, therefore the rates were lower. Later on, the funding of the loans progressed towards long-term funding instruments, which generated a gradual increase in the cost of funding in 2012. From the beginning of 2013, the rates decreased progressively due to a low-rate environment. From 2022, the rates started to increase following central bank rate hikes and quantitative tightening in response to higher inflation rates. 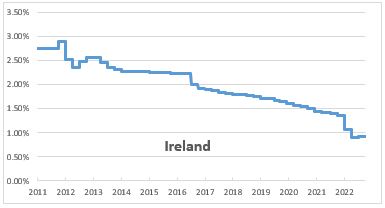 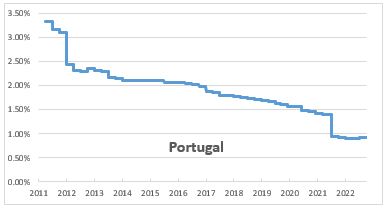 Initially the ESM started operations with the ESM bill programme and only provided financing on a short-term basis. The ESM thus granted the first loans through disbursements in kind using short-term securities designed to boost banks’ capital. This explains why Spain was charged such low rates at the beginning of its programme. From the end of 2013, the ESM started issuing longer-term funding instruments, which, together with the rollover into the pool of loans initially disbursed in kind, explains the initial increase in the Spanish lending rate. After this increase, the rate remained relatively constant, except for the rollover of the last disbursement in kind into the pool at the end of 2015. From 2017, the lending rate decreased progressively as new funding was being raised at lower rates than the historical pool. The tendency reversed in 2022, when interest rates started to increase following central bank rate hikes and quantitative tightening. 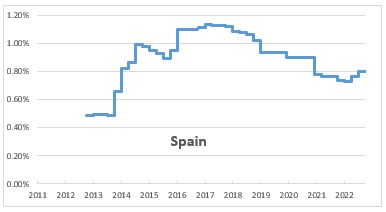 Until September 2013, the ESM relied principally on pool-funded loans to finance the programme for Cyprus. For the same period, all Spanish loans were provided instead as in kind loans of ESM-issued notes. Thus, for the period before September 2013, there was a gap in funding rates between Cyprus and Spain because the pool-funded rates (cost of funding) were higher than the in-kind rates. After the disbursement in-kind of the bank recapitalisation loan, the Cypriot blended lending rate fell by 20 basis points. In 2014 and 2015, the lending rates of the two countries started converging. Both increased as the ESM issued longer-term funding instruments, more pool-funded Cypriot loans were disbursed, and a large amount of Spanish and Cypriot loans that were disbursed in kind gradually shifted to pool-funded loans. Since 2017, the lending rate of Cyprus has followed the trend of Spain. 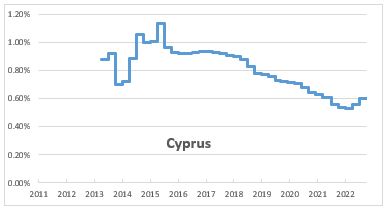 For the EFSF Greek programme, the dynamics were different than for Ireland and Portugal. Initially, Greece was mainly financed by disbursements in kind, with 87% of the initial disbursements indexed on the six-month Euribor rate. Therefore, the rates started relatively low and gradually moved upwards through November 2012. This occurred as the loans related to the private sector involvement, initially disbursed in kind, were rolled into the pool, and new pool-funded loans were disbursed. The Eurogroup decided in late 2012 to lighten Greece’s repayment burden. It deferred Greece’s interest payment until December 2032 and cancelled the initial guarantee commission fees of 10 basis points. The rates also remained significantly lower than those of Ireland and Portugal, mostly due to the funding structure: some loans for the recapitalisation of Greek banks continued to be financed in kind whereas loans to Ireland and Portugal were only pool funded through longer duration fixed-rate funding instruments. Starting from January 2013, the upward rate movement stems from the rollover of the back-to-back loans to the pool. From mid-2014 to the end of 2016, the lending rates to Greece gradually decreased, reflecting the decrease in the cost of funding of the EFSF. This easing trend was reversed in 2017 with the implementation of the risk reduction measures decided by the Eurogroup in December 2016.

In August 2015, a new ESM-financed assistance programme had been approved for Greece and most of the corresponding loans were disbursed in cash; these were therefore pool funded and Greece has been charged based on the ESM’s cost of funding rates. Other disbursements were made in kind, i.e. through the issuance of ESM floating rate notes to recapitalise Greek banks. Both types of loans were affected by the measures decided by the Eurogroup in December 2016, and the ESM blended lending rate to Greece increased substantially in 2017 as the result of their implementation. Similar to other programme countries, from 2022 the lending rate of Greece started to increase following central bank rate hikes and quantitative tightening. 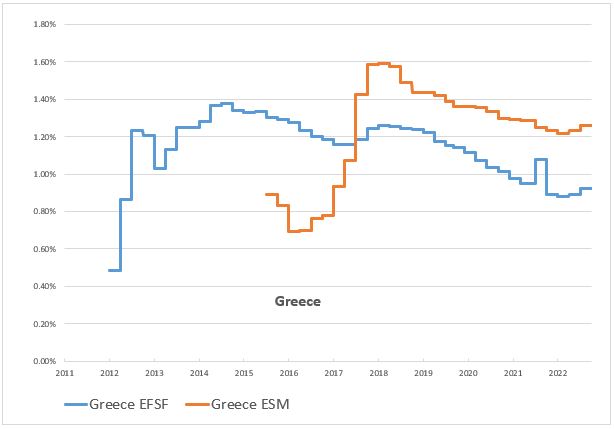