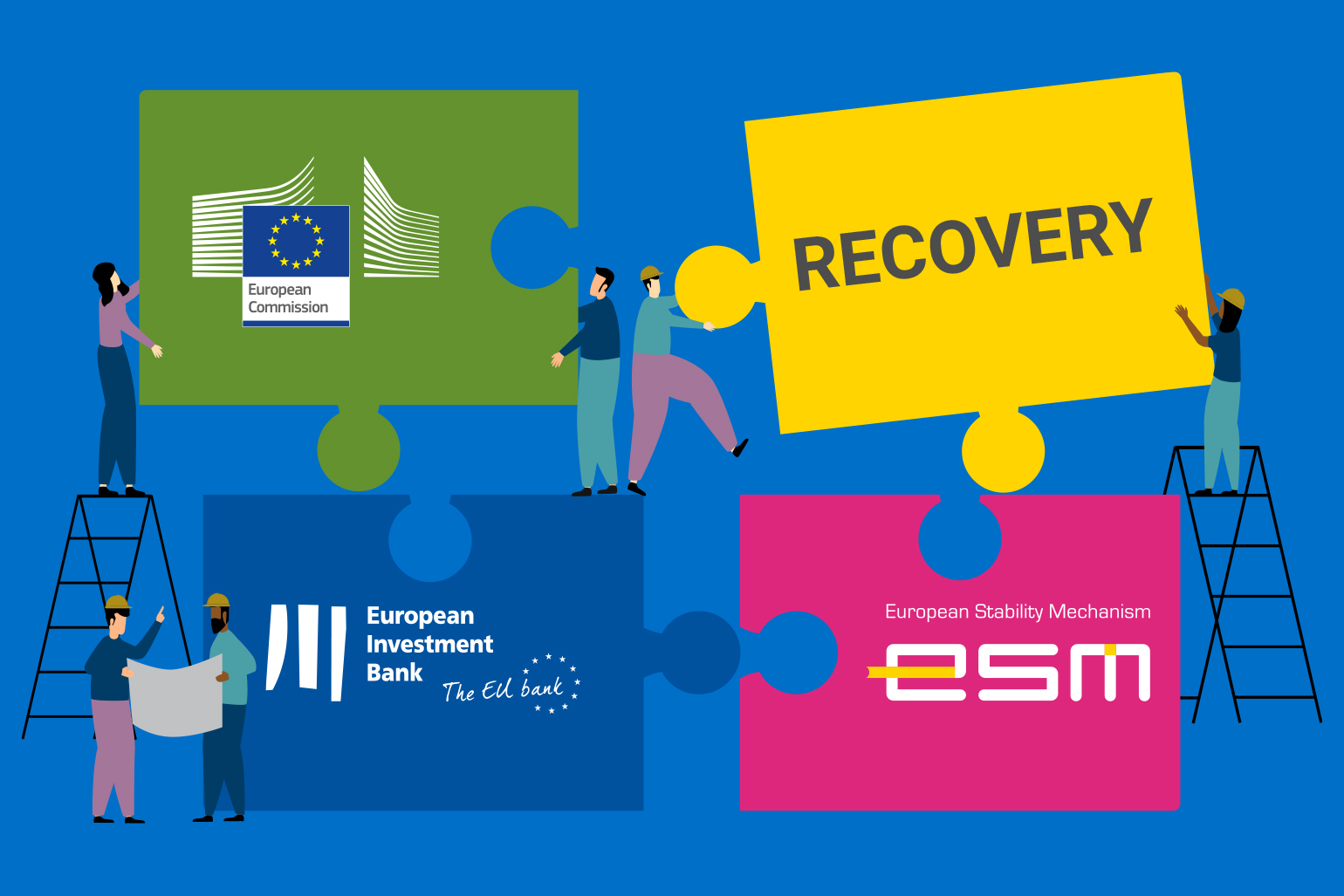 Covid-19 took us all by surprise. Within weeks, a local health issue far from European shores grew to a global crisis of unprecedented proportions. The so-called “Great Lockdown” has brought the global economy to its knees, causing the loss of jobs and businesses while threatening to deplete government budgets and inflate public debt levels.[1] Forecasts point to the worst economic contraction since the Great Depression: in 2020, the European Commission spring 2020 forecast anticipates a GDP fall of 7.7% in the euro area and 7.4% in the EU.[2] Far worse outcomes are possible, as the spring forecast’s downside scenarios illustrate. We are in the midst of a deep, uneven and uncertain recession with a long and rocky path to recovery. This blog is a joint effort to explain the role of the three institutions — namely the European Commission (EC), the European Investment Bank (EIB) and the European Stability Mechanism (ESM) — and their role in fighting the economic implications of the viral outbreak and the way ahead.

The severity of this crisis demands swift, coordinated, and extensive policy actions: European citizens need their health and jobs protected by adequate measures. Large firms and small businesses alike must have access to liquidity and preserve cash flows until revenues rise again. Governments also need a helping hand as their swift efforts to protect their citizens and the economy have put an unprecedented strain on their budgets.

The EU and its member states have reacted quickly. Over the past two months, member states have taken discretionary budgetary measures of about 3.2% of GDP and have created liquidity facilities of 22% of GDP. The efforts by member states are supported by actions at the EU level that allow governments to respond more effectively to the needs of their citizens. The European Commission — with support from the Council — has activated the General Escape Clause, which temporarily suspends EU fiscal rules of the Stability and Growth Pact (SGP).[3] The Commission has also provided increased flexibility in the implementation of the state aid rules. Finally, rules governing the drawdown of cohesion funds have been relaxed, making available additional funds for member states to fight the crisis.

The European Central Bank (ECB) reacted swiftly by substantially expanding its asset purchase programme, boosting the volume of purchases and widening eligibility with the new €750 billion Pandemic Emergency Purchase Programme (PEPP).[4] Further actions to ease the burden on the banking sector and to keep credit flowing have included long-term financing for banks with relaxed collateral requirements, more flexible use of banks’ capital and liquidity buffers, and a boost to guarantee schemes.

All the above measures have been pivotal in preventing a much worse recession in the short term. But they alone are not sufficient to prevent harmful dynamics from playing out across the EU economy in the medium term.

Figure 1: Interplay and sequencing of actions at national and EU level to fight Covid-19 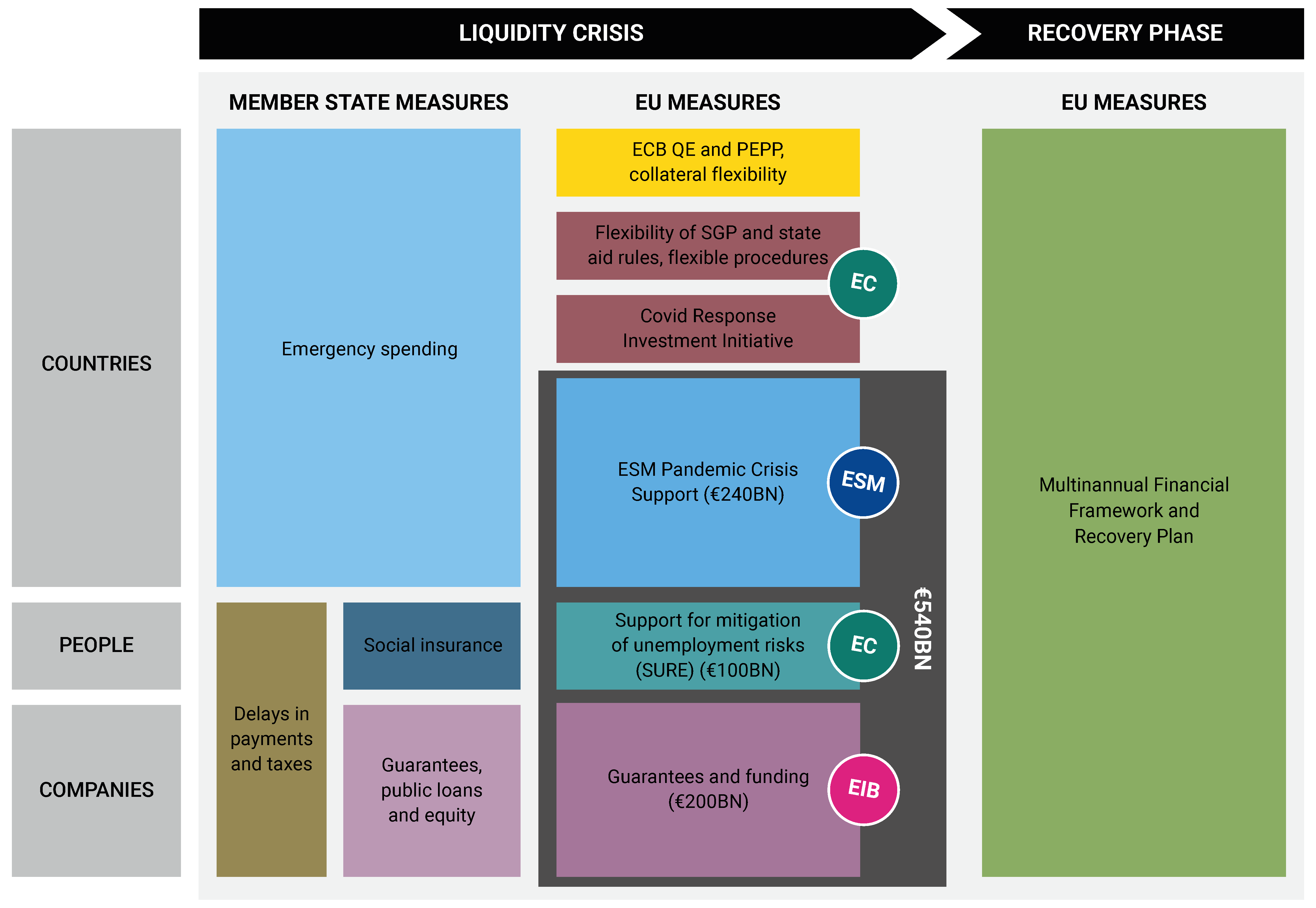 Note: the sizes of the compartments do not reflect the size of the support.

With the adoption of the first European crisis package by the Eurogroup in early April, the EU has endorsed an additional layer of protection for workers, businesses and countries. The European Commission, the European Investment Bank, and the European Stability Mechanism will finance over €540 billion to complement national efforts in the fight against the effects of coronavirus. The safety nets that make up the package have been designed to match each institution’s expertise. They can be deployed swiftly, complementing national measures and ensuring an even-handed policy response across the EU’s single market.

As member states have begun to gradually ease restrictions on citizens and businesses imposed during the early phase of the Covid-19 pandemic, EU leaders and institutions have turned their attention towards the medium-term recovery of our economies. Leaders have asked the Commission to assess the needs and to come forward with proposals commensurate to the challenges. These proposals will be presented imminently.

The impact of the pandemic differs considerably between member states, as does their ability to absorb the economic and fiscal shock and to respond adequately to it. Without a meaningful EU response, there is a real risk that the Covid-19 crisis will lead to a further increase in the economic and social divergences in the Union and a permanent distortion of the EU single market’s level playing field.

This is why the Commission will very soon present a Recovery Plan, to support member states, citizens and businesses to overcome this crisis, and to come out stronger. The EU’s long-standing commitment to supporting investment — especially in the twin transition towards a ‘greener’ and more digital European economy — remains a central design principle for the upcoming proposals.

The stakes for Europe have never been higher. But these are matched by the determination and resolve within Europe’s institutions to help us all recover from this crisis.

European European Council, A Roadmap to Recovery
Revoltella, D. (2020), Covid-19 policy response and the role of the EIB