Euronomics: The building blocks of recovery 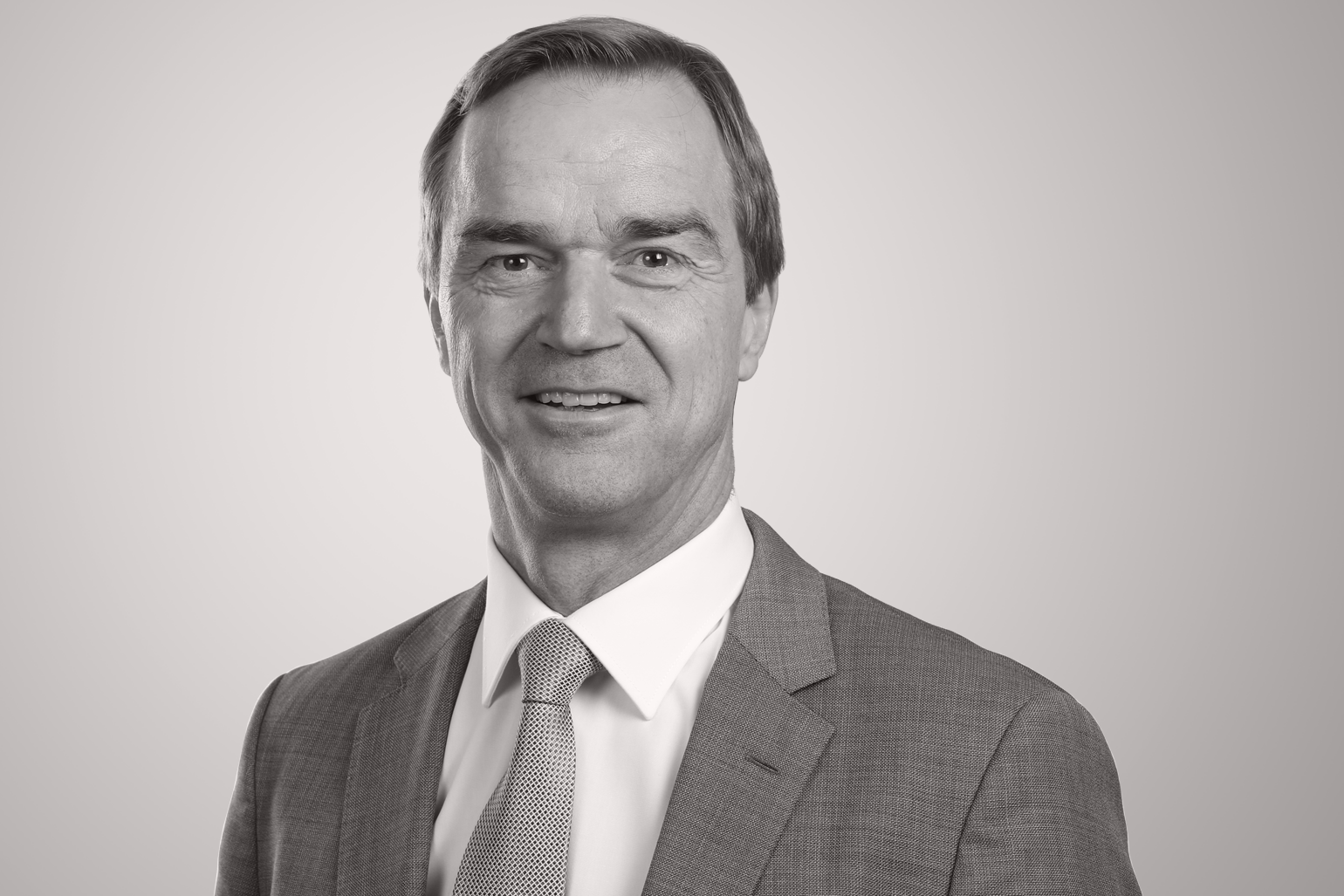 The suffering and lives lost as a result of the Covid-19 pandemic have taken a heavy toll on humanity, and stopping it is the most urgent concern. The economic damage is also unprecedented in the European Union. Production has fallen by around a quarter and a more severe recession than the 2008 crisis is on the horizon: the European Commission’s spring forecast points to a 7.7% decline in euro area GDP this year. Market analysts are even more pessimistic, some considerably so.

Though the Commission expects a fairly strong recovery in 2021, it also anticipates a number of risks. Likewise, market participants are increasingly discarding the prospect of a “V-shaped” recovery, which would have a sharp economic decline followed by a similarly strong recovery. Instead, they view a more gradual, weaker rebound as more likely, although nobody expects an “L-shaped” recovery in which the economy stays in deep recession for a prolonged period.

As the virus begins to abate, several countries have started to ease lockdowns with many others planning to follow suit in the coming weeks – but the timing and pace of reopening remain uncertain and it is increasingly clear that exits will be gradual. Moreover, there is the risk of a second viral wave that may force governments to renew lockdown measures. Full economic activity and normal economic and social behaviour may only resume when a vaccine is found and widely available.

Yet, the future is not entirely out of our hands. Indeed, what we do now and in the coming months will shape not only the length and depth of the recession, but also countries’ economic prospects. There are at least four reasons why the length and depth of the recession, and what governments do at the national and European level to overcome it, will shape the outlook for growth and prosperity for the decade to come:

First, the current liquidity crunch will cause growing problems for many companies, risking a permanent loss of productive capacity. Companies that asked for credit or state support may obtain it and survive, but high debt loads may impair their future ability to invest and state support may lead to nationalisation once the pandemic recedes. Small- and medium-sized companies with limited capital buffers are likely to suffer even more and many may even cease to exist. Thus, the risk of short-term output loss is compounded by that of badly damaged long-term growth prospects for the economy.

Second, labour market hysteresis – persistent damage from high unemployment – is likely. Governments are making great strides in keeping workers employed, with remarkable success: up to a third of employees are under job retention schemes in major euro area economies. While this is perhaps one of the most promising policy efforts to mitigate the downturn and pave the way for a successful recovery, some increase in unemployment is inevitable. The longer workers remain unemployed, the more difficult it will be to re-employ them. Some sectors – like tourism – may take longer to recover and others may face structural overcapacity and therefore never fully recover, forcing their workforce to relocate.

Third, the increased lending by banks for crisis support may constrain their ability to provide financial support later on. Regulatory changes allow, and government policies encourage, banks to boost credit and provide liquidity broadly to households and firms. While not an immediate financial stability risk, a prolonged containment period and higher non-performing loans will affect profits and capital, constraining their ability to lend for investment and the creation of new companies and jobs.

Fourth, higher public deficits and debts resulting from pandemic fighting efforts in several countries will constrain future government capacity to provide continuous and additional fiscal support for recovery. While this must not curtail necessary actions by governments to manage the Covid-19 crisis, it does point to the need for cost-effective measures, targeted approaches, and the choice of support mechanisms that promise the greatest payoff by improving longer-term growth and social prospects.

What is being done to address these risks, and what more is needed? For one, governments have stepped up their efforts like never before with policy responses to shield households, companies, and banks from graver harm and dislocation. At the European level measures have been taken to strengthen convergence and preserve the single market. As we climb out of the depths of this pandemic crisis, we should lay a solid foundation for a strong and sustained recovery.

As illustrated in Figure 1, Europe could face a number of potential post-crisis scenarios. There is a serious risk of “falling behind” its earlier growth potential after the crisis, with an incomplete recovery and growing national and regional divergences. European economies may be able to “reset the clock” meaning that Europe would, in future, grow in line with its pre-crisis potential, but be unable to recoup the current output loss. Or, Europe may be able to “catch up” by embarking on a more dynamic growth path that matches or even surpasses that of other fast-growing regions in the world. This would require an effort by all countries, including those that performed strongly before the crisis. 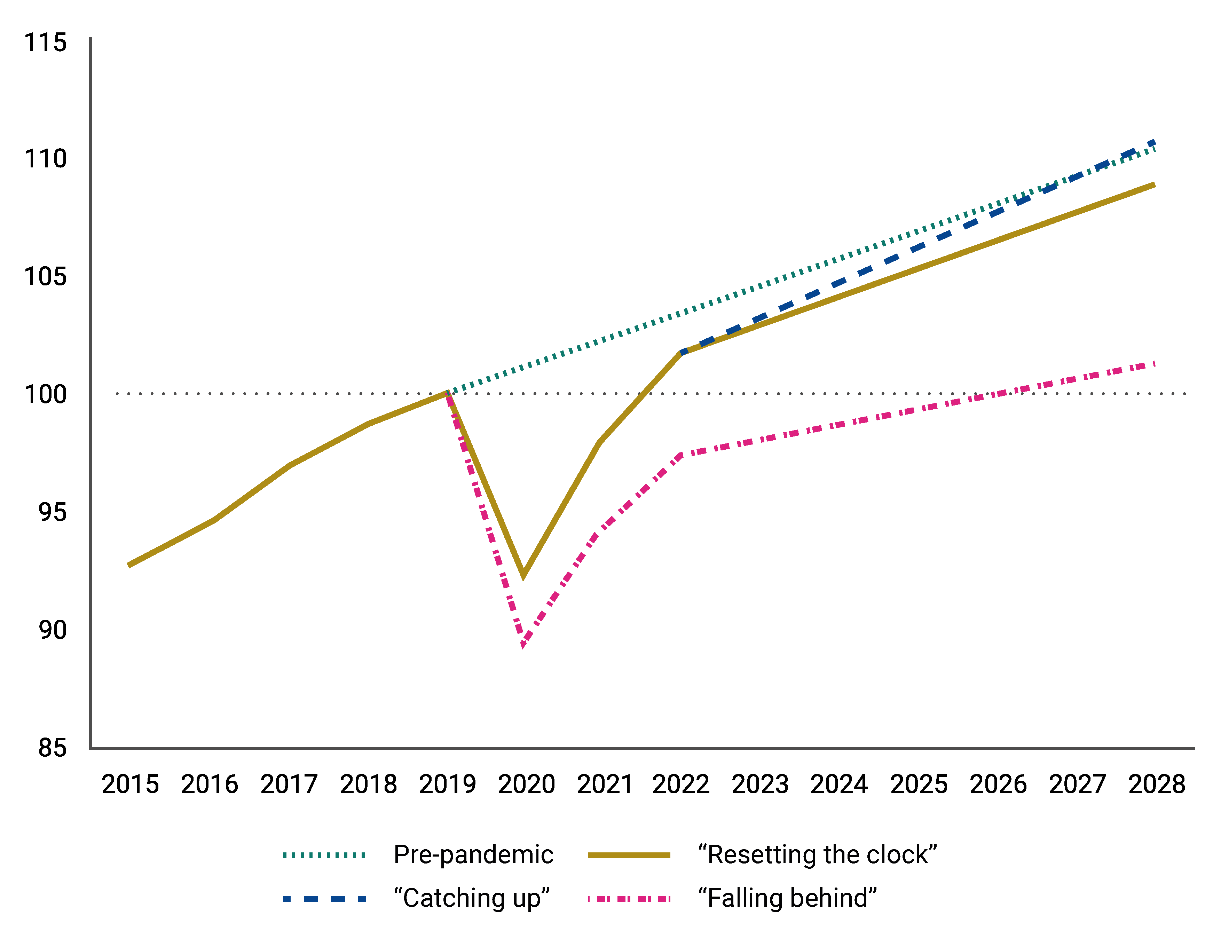 Source: ESM based on European Commission. Notes: The “pre-pandemic” scenario is based on the European Commission winter 2020 forecast and the Debt Sustainability Monitor 2019 for the medium-term growth rates. (i) The scenario “resetting the clock” is based on the European Commission’s spring 2020 forecast and the assumptions published in the assessment of public debt sustainability regarding the Pandemic Crisis Support for medium-term growth rates. (ii) “Catching up” and “falling behind” are ESM scenarios for illustrative purposes and reflect higher growth and a more severe economic shock with a slower recovery.

The European Commission forecasts the euro area will reach pre-crisis income levels again in the next two years. What happens thereafter will depend on current policy measures. If well managed, the recovery phase could allow our economies not only to return to past performance but also to successfully restructure, grow faster, and become 'greener' in the long run as capital lost is recovered and allocated more efficiently, for example, through smart investment in sustainable technologies, digitalisation, and the emergence of new industries.

But there is the risk that countries could fall behind both in the shorter and longer term due to lower growth potential. While the pandemic is a similar shock to all our economies, its impact has been unevenly distributed, just as the financial strength to cope with it varies across companies, banks, and governments. That means those countries and regions hit harder by the pandemic may actually face the risk of falling behind further and for a long time.

The support from the European institutions is a crucial element in the common response to Covid-19 to ensure convergence and a single market. Much of the policy response will continue to be at the national level and extends through all European countries, including those performing strongly before the crisis. As the impact of the pandemic, national conditions, and policy responses differ, European institutions complement national policy measures and avoid divergent economic developments in the future.

The first European support package will provide financing of up to €540 billion by the European institutions,[2] over and above the liquidity support provided by the European Central Bank (ECB)[3] to ensure the continued effective transmission of monetary policy. The ECB’s action in providing liquidity and facilitating lending to the real economy remains crucial. The first European support package prioritises early financing support to countries for healthcare measures (the ESM’s Pandemic Crisis Support), for national unemployment schemes (the European Commission’s SURE initiative), and to provide financing to firms (the EIB’s Pan-European Guarantee Fund).

As countries move toward recovery, the role of European institutions is also broadening from emergency support to providing further complements to national efforts. Europe’s role here, again, is to exploit the synergies from working together and foster convergence. There are three ways this can be helpful in the recovery phase. We need a framework for action by national governments where consistency is key to effectiveness and avoiding harmful spillovers; add resources, know-how, and coordination for cross-border investment and policy initiatives; and provide a backstop of liquidity and financing for sovereigns in case of need.

The EU’s Recovery Fund will be the lynchpin of joint efforts to support recovery in the countries and regions hardest-hit by the crisis. Building on the EU budget makes it possible to help countries through transfers, as put forward in the French-German initiative. It is an act not only of political, but also of economic solidarity while it also strengthens the forces of convergence against the risks of divergence.

Europe has an important role in ensuring a level playing field, protecting the EU single market, and continuing to strengthen the Union – including in the areas of banking and capital markets. I firmly believe that Europe’s competitive strength is deeply rooted in the EU single market and the joint power of our financial markets to mobilise funds for rapid growth. Further European integration – such as a more integrated services market and more harmonised regulation – will help to successfully rebuild our economies after the crisis, boosting areas with dynamic growth potential while avoiding excess production capacities in others.

Finally, let us not forget that a strong firewall against crises – the ESM – is already serving the euro area, and will serve it well in the future. This is why European leaders have decided to strengthen the mandate of the ESM in several important ways. I am confident that in implementing this extended mandate, we will make our contribution to a stronger Union and its stable, prosperous future.

[1] I would like to thank Pilar Castrillo, Niels Hansen, Robert Kraemer, Nicoletta Mascher and Markus Rodlauer for helpful discussions and input.
[2] The overall package of combined measures by the European institution is outlined in the report of the President of the Eurogroup issued on 9 April 2020.
[3] See Schnabel, I. (2020), The ECB’s response to the Covid-19 pandemic and Lane, P. (2020), The monetary response to the pandemic emergency.

Cold winter ahead? Implications from a Russian gas cut-off for the euro area

A vision of debt capital markets