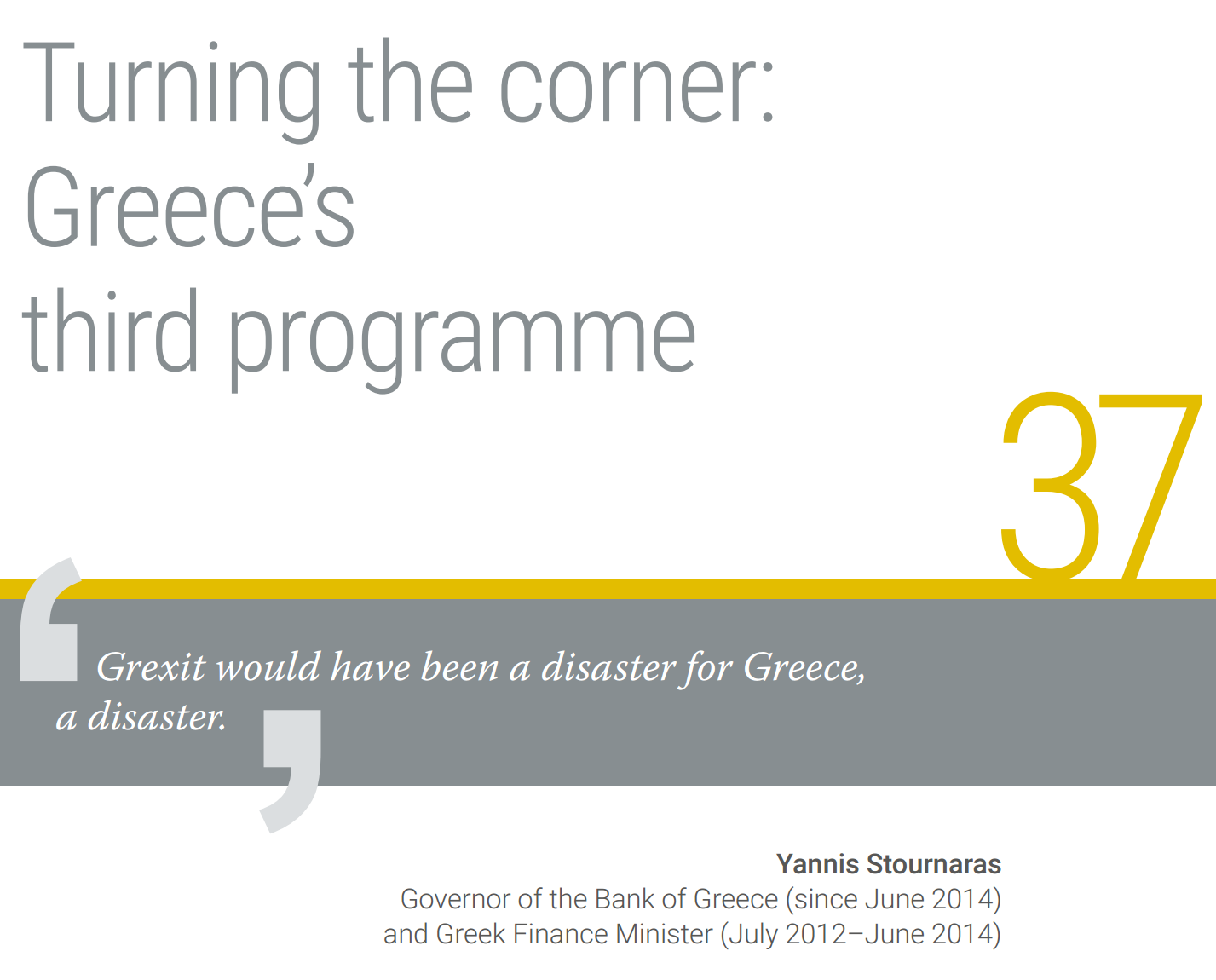 Greek banks were shut and in need of cash when the government at last requested a third programme. On 10 July 2015, a Friday, the European Commission and the ECB responded favourably to the Greek request for an ESM loan, warning that ‘an uncontrolled collapse of the Greek banking system and of Greece as a sovereign borrower would create significant doubts on the integrity of the euro area as a whole’[1]. 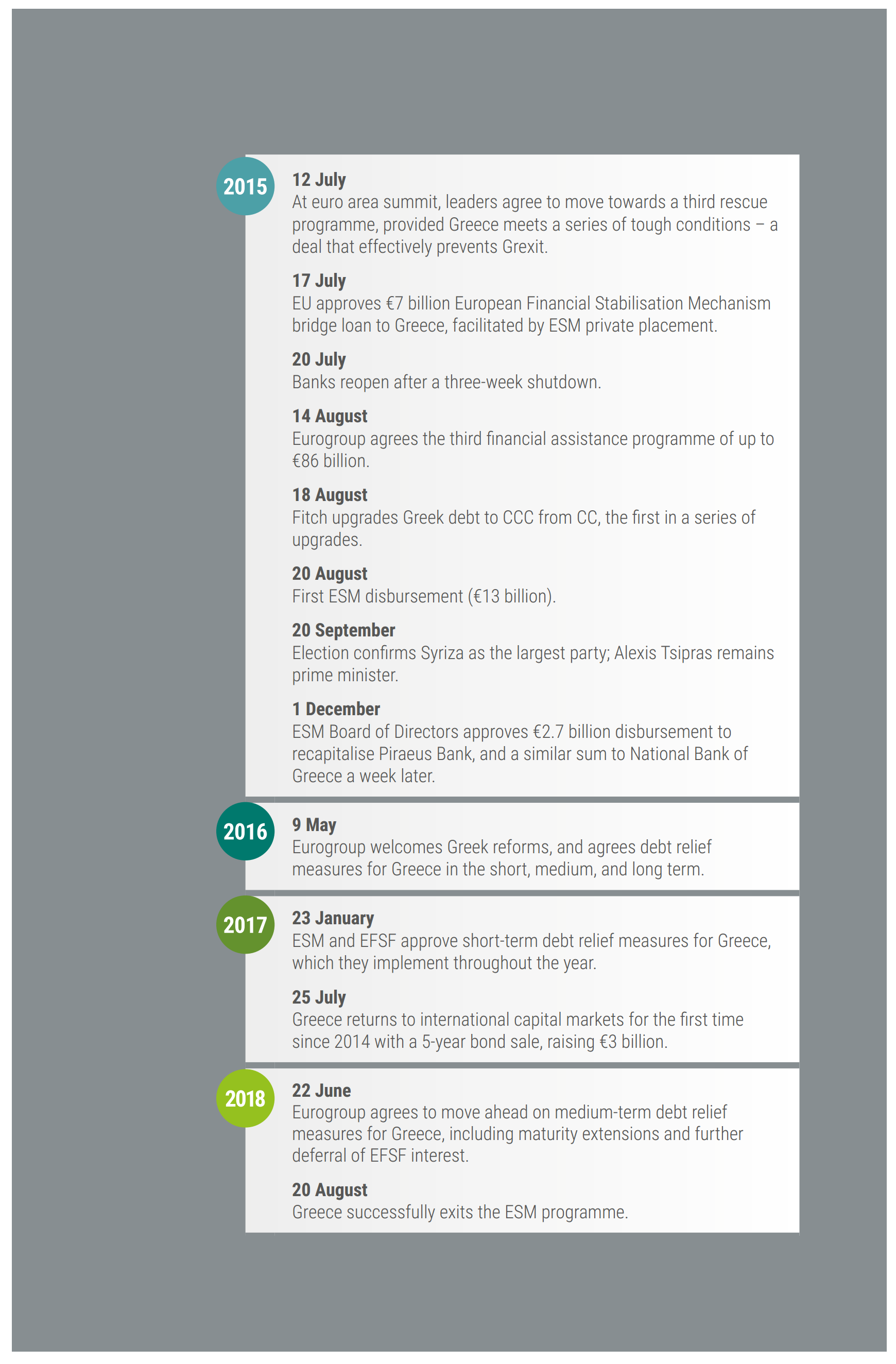 For more on the bridge loan, see ‘Focus — An unusual money market transaction’ later in this chapter.
On 16 July, the Eurogroup endorsed the third rescue programme in principle[11]. A day later, the 28-strong EU approved the bridge loan, with a term of up to three months[12]. Greece then used the money to pay the ECB on time and clear its arrears with the IMF.
The ESM’s role in the transaction didn’t become public until September, when it was reported in the media[13]. By that time Greece had repaid the money, and the firewall’s unusual step of showing up on both sides of the balance sheet no longer made the waves it would have in the heat of the moment. It was one of the ESM’s most important contributions to the funding chain, and one of its most unsung.
Regling said there was ‘zero doubt’ that the ESM was in a position to extend the financing that would, in turn, allow the three-week bridge loan to go forward.
‘It was certainly something exceptional – we don’t usually invest €7 billion in a single week,’ he said. ‘We used the scope that we had because it was in everyone’s interest. It was in our interest, as Greece’s largest creditor, that the country get out of this status of a “defaulting” country.’ 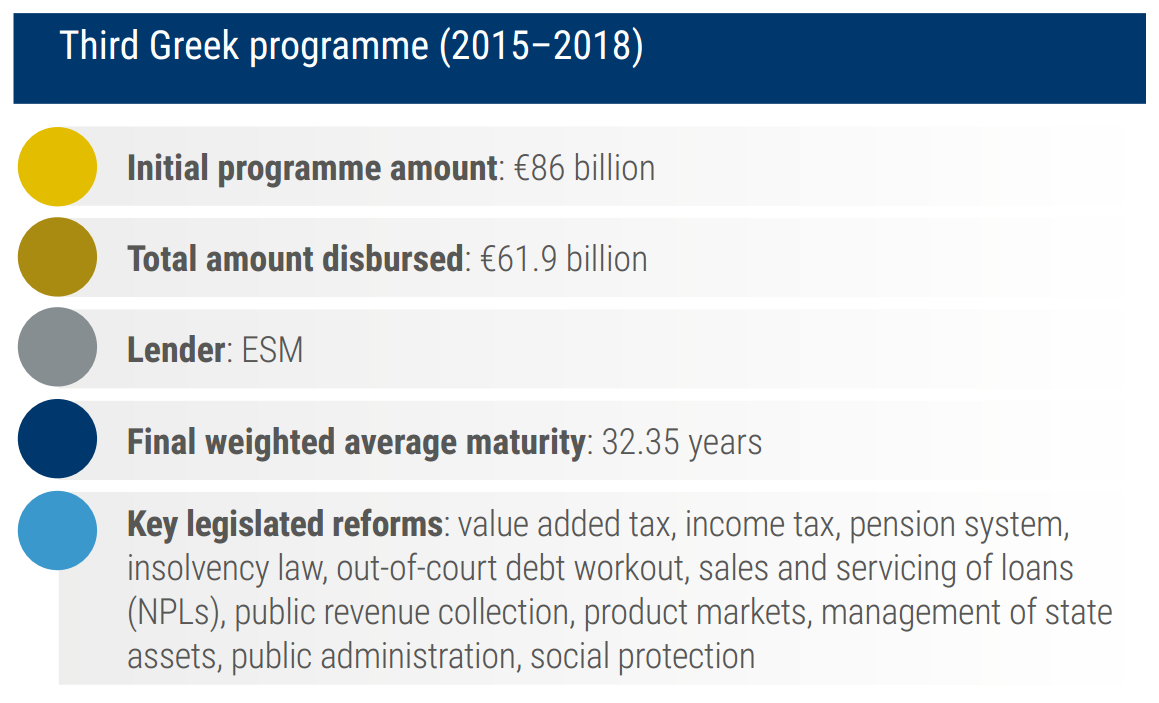 After a three-week shutdown, Greek banks reopened on 20 July[14]. The capital controls remained in place, but getting the banks open again was a crucial step towards restoring Greek financial stability.
Greece’s third euro area financial assistance programme was finally approved on 14 August 2015[15]. It envisaged a financing envelope of up to €86 billion, including up to €25 billion to recapitalise the banks and a cushion for unexpected needs. In contrast to past programmes, in which the ESM had played a supporting role, the firewall became an active participant in the negotiations.
‘It was a logical step for the ESM to become closely involved in the negotiations concerning financial support,’ former Eurogroup chief Dijsselbloem said. ‘The knowledge and expertise on beneficiary countries and on financial markets, as well as the specifics of the ESM toolkit are valuable in discussions on the implementation of support programmes.’
For its part, the IMF stepped back. Voicing concerns about Greece’s long-term debt outlook, the IMF declined to contribute financially to the third programme, although it would later, in 2017, agree to a stand-by arrangement to be in place through the end of the ESM package[16].
On 18 August 2015, Greece began to reap market benefits, earning a Fitch upgrade to CCC from CC. On 20 August[17], the ESM approved the first programme tranche, a €26 billion lump sum that included €10 billion for the banks and money to pay back the bridge loan[18]. Securing the payouts from this tranche would be another tightly managed process, contingent on Greece carrying out reform pledges over time. Greece got €13 billion in August to meet its immediate cash needs and the bank money held in reserve to be made available upon request, subject to approval by the ESM Board of Directors. 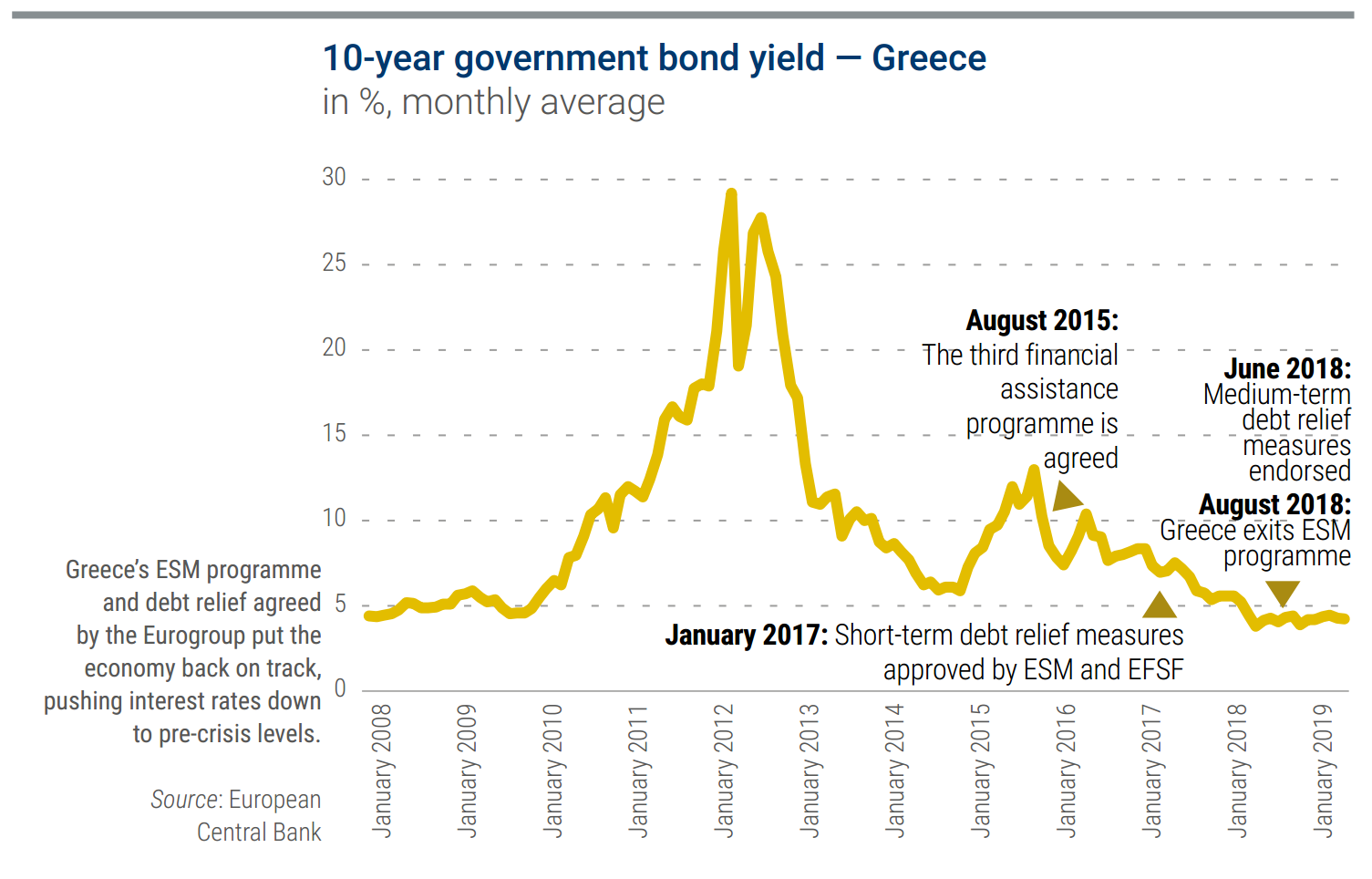 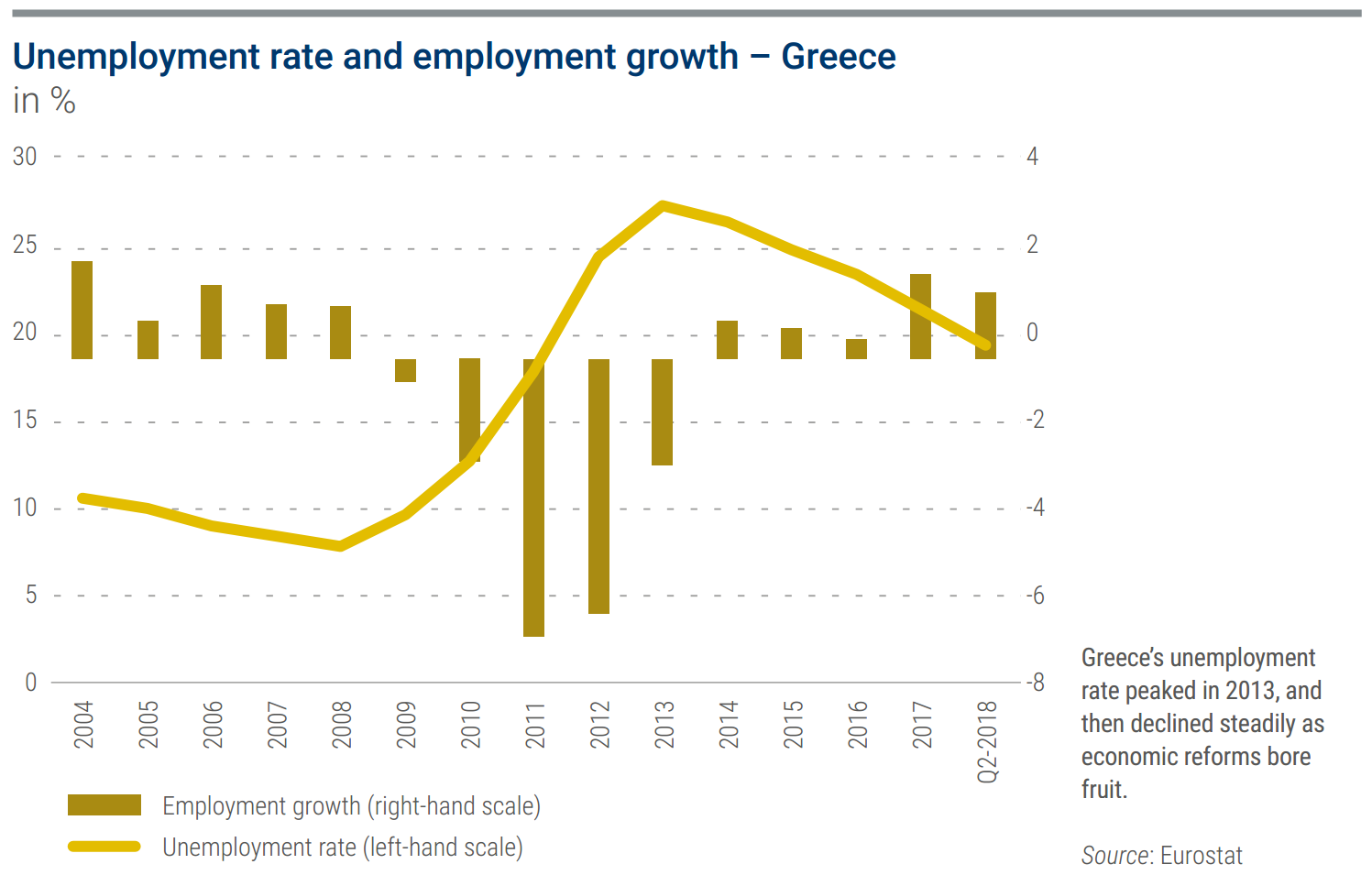 In a speech to the European Parliament on 11 September 2018, Prime Minister Tsipras summed up Greece’s transformation. Greece ‘is a different country,’ he said. ‘Today we stand on our feet once more and look towards the future with optimism. We escaped the spiral of recession and brought the economy back on track towards growth’[33].
For the future, Greece has pledged to continue its policy of budgetary rigour, committing to a primary surplus of 3.5% of GDP until 2022 and around 2.2% from 2023[34]. Efforts must continue to strengthen bank balance sheets, render the public administration more efficient, and foster a business-friendly environment. Greece will remain under the full scrutiny of the ESM until all loans have been repaid.
‘Greece will not be on its own,’ Regling said in a video message on the day Greece regained its financial independence[35]. ‘The ESM will be a long-term partner of Greece. We have an interest that the Greek economy does well in the future.’

When the EU’s emergency funding vehicle, the EFSM, was authorised to provide a bridge loan to Greece, it had a top credit rating but virtually no time to raise the money on the financial markets. ‘We arranged the private placement with a very small team between the ESM and the Commission. In the end, the spirit and cooperation were exceptional,’ said ESM General Counsel Eatough.
ESM Head of Investment and Treasury Lévy remembers intense brainstorming leading up to the operation: ‘This question arose of whether we could provide €7 billion at very short notice.’ The investment team worked out the mechanics of the transaction, while the political negotiations on the bridge financing details proceeded. The EU was already on the authorised issuer list for ESM investments, and the ESM was a regular buyer of EU bonds in the market. However, investing in a private placement entailed additional logistical complications, from crafting and signing a bilateral legal agreement with the EU to making changes to the information technology system to process the transaction.
From a technical perspective, the ESM needed to decide which of its internal portfolios would be invested in the transaction and whether or not to split it into in a series of tranches. Regling agreed it would be simpler and more effective to do it all in one operation.
At one point, ESM experts wondered if the transaction was the right thing to do, but the alternative – leaving the EFSM looking elsewhere for funding as Greece teetered – was considered a greater risk. The ESM’s investment management committee set extra conditions and conducted a thorough review, making sure the investment decisions could be validated by all senior ESM staff members.
‘It was in July. There was a lot of stress around this operation,’ Lévy said. ‘Personally, I was concerned about the technical execution, because this was the biggest one-off, single-sum investment that we had ever done. So, to ensure that all aspects of the decision were taken into account, we had a full review process.’
The money market transaction, as it was eventually called, was finally underway.
On the technical side, talks between the ESM and the European Commission went smoothly. Market conditions posed a challenge, however, because short-term interest rates for an issuer like the European Commission were close to -0.20%, while the ESM was not permitted, at the time, to invest at an interest rate of less than 0%. The Commission accepted this as a condition because, even though its implied funding rate was negative, there were no readily available alternatives. The ESM also offered an early repayment option – so, while the transaction had a maturity of three months, it could be paid back as soon as the bridge financing was no longer needed, which turned out to be a matter of weeks.
‘We lent the money to the Commission, not Greece, and on the basis that it matched our own investment framework. We invested in EU paper and then we were repaid as soon as the money was unlocked,’ Eatough said. ‘If we hadn’t succeeded, it would have been game over.’
Tight timing was a hallmark of the operation. ‘We got the green light very late,’ Lévy said. ‘The money was needed on a Monday morning, but by Friday we still didn’t know whether or not the EFSM bridge loan to Greece would be approved. All of the contracts were ready and the weekend approaching, but we were not authorised to sign the documents. Luckily both the European Commission and the ESM have offices in Luxembourg.’
In the end, one of the institutions signed on the Friday night and the second one over the weekend, to make sure the effective date matched the political agreements. One of the ESM’s lawyers went to collect the signatures.
‘We took pictures with the contract signed on that day, because it was a big thing,’ Lévy said. ‘It was very exciting; we knew we were involved in something important.’
When the time came to input the amounts and account numbers into the system, there was no room for error. The ESM had to send money to the EFSM, the EFSM had to forward it to Greece, and then Greece had to make the crucial payment to the ECB. Martins was the investment team member tasked with entering the trade in the system, outside the ESM’s normal business hours.
‘We had to make sure the system was open earlier than usual, that we had front office managers, back office managers, and middle office managers there first thing in the morning,’ Lévy said. ‘As I recall, Carlos arrived at 7.00, because we needed all of the operations to be done by 8.00 or 8.30. I distinctly remember Carlos meticulously checking the screens to make sure he had all the numbers right.’
Martins knew it was a momentous step. ‘That day, that time, I decided to not simply double-check – as I usually do – but to triple-check the zeros in the transfer amount, as I was fully aware that another important page of the ESM was being written right there. And so I clicked to finalise the transfer.’