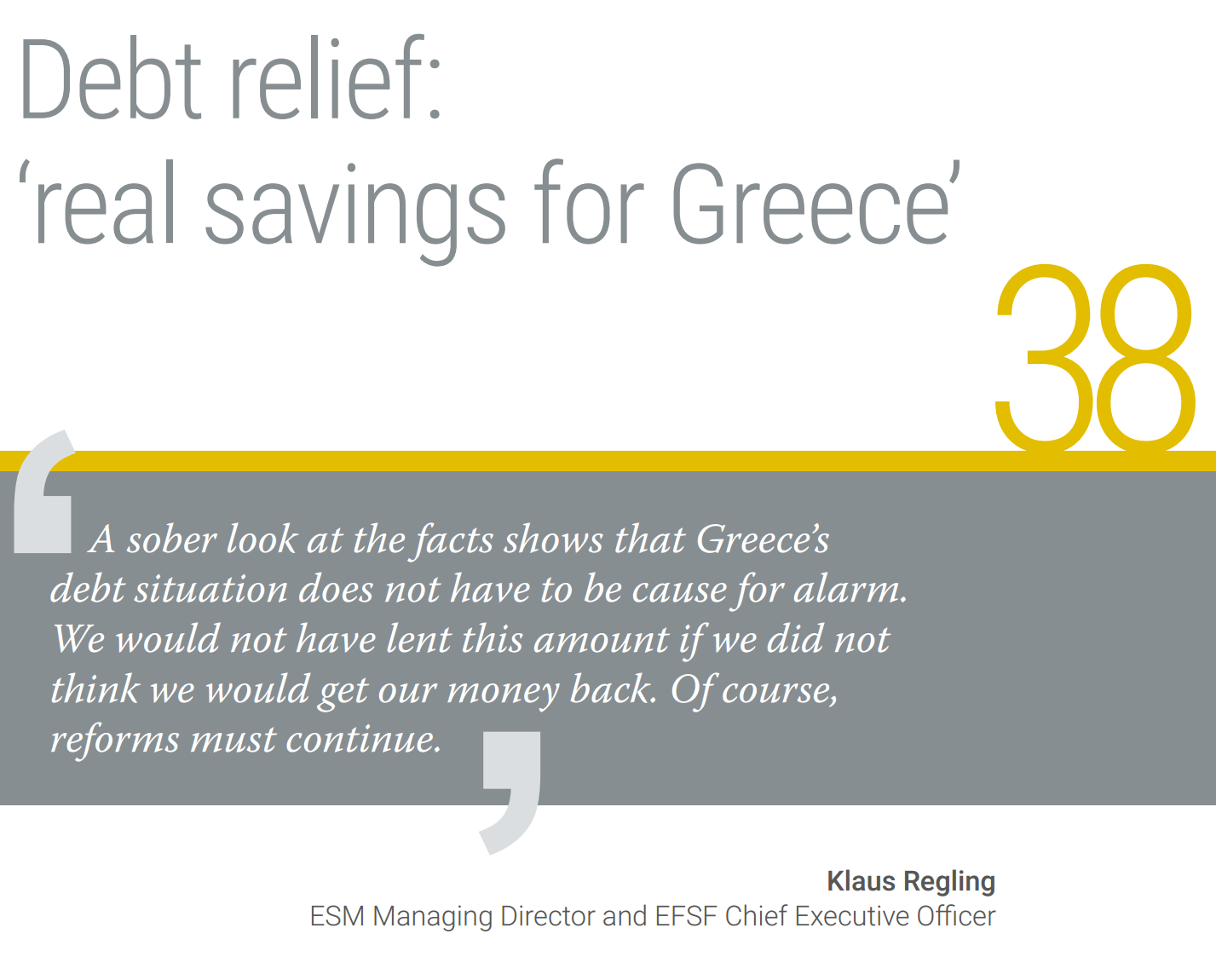 Greece emerged from its programme in August 2018 with outstanding debt of €190.8 billion to the euro area rescue funds. As holders of 53.2% of Greek central government debt at the end of 2018[1], the EFSF and ESM are by far the country’s largest creditors. Since the latest debt relief measures agreed in June 2018, the last EFSF loans are not scheduled to be retired until 2070, making Greece the longest-term partner of the firewall.
Managing and paying down debt until then – through economic and interest rate cycles that are beyond any reasonable forecasting horizon – will pose a generational challenge for Greek society. It is worth noting, however, that without the burden-sharing policies put in place by European creditors – from the first interest rate abatements in March 2011 to the later relief offered by the Eurogroup – the debt would be higher. None of these money-saving steps breaks with euro area strictures that require Greece to repay the principal amount of the loans in full. 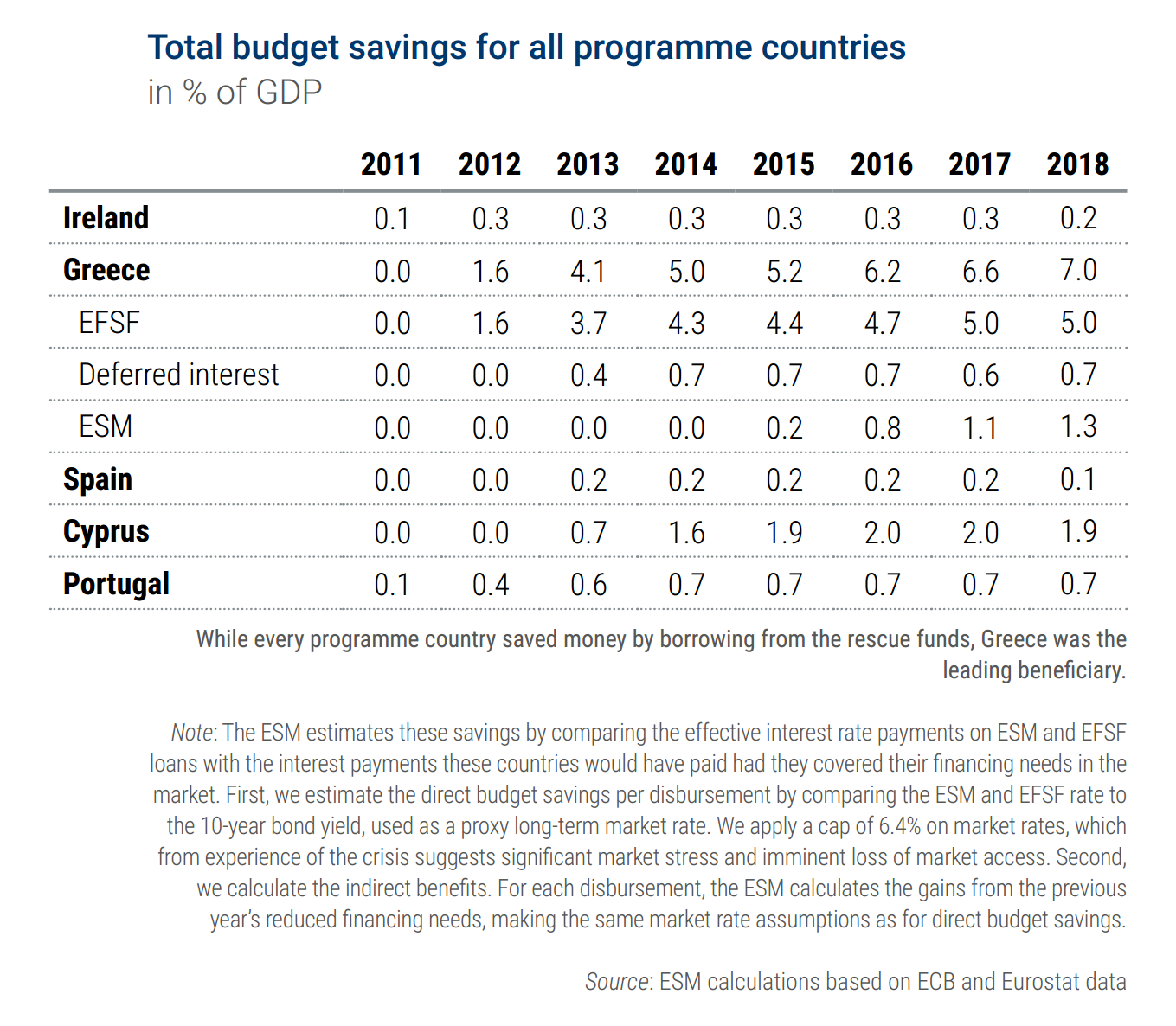 ‘When I look at what happened in the past, it’s quite significant that not everybody may be aware how much debt relief has already been granted by private and official creditors,’ ESM Managing Director Regling said. ‘These are real savings every year, and a very large amount of money. It may not be so evidently visible, but it’s really there, and therefore the debt service in the Greek budget, in terms of GDP, is less than in many other countries.’
To be sure, the debate over Greek debt sustainability looks set to continue. The IMF declined to take part in the third programme out of concern over Greece’s debt, pressing the European creditors for more concessionary terms. In the final weeks of the programme, the IMF hailed Greece’s budget-cutting efforts and virtual elimination of economic imbalances, while remaining unconvinced about the long- term debt-repayment outlook. Relief offered by European creditors ‘has significantly improved debt sustainability over the medium term, but longer-term prospects remain uncertain,’ the IMF said in an assessment published on 29 June 2018, just after the latest Eurogroup debt relief agreement[2]. ‘[I]t could be difficult to sustain market access over the longer run without further debt relief.’ 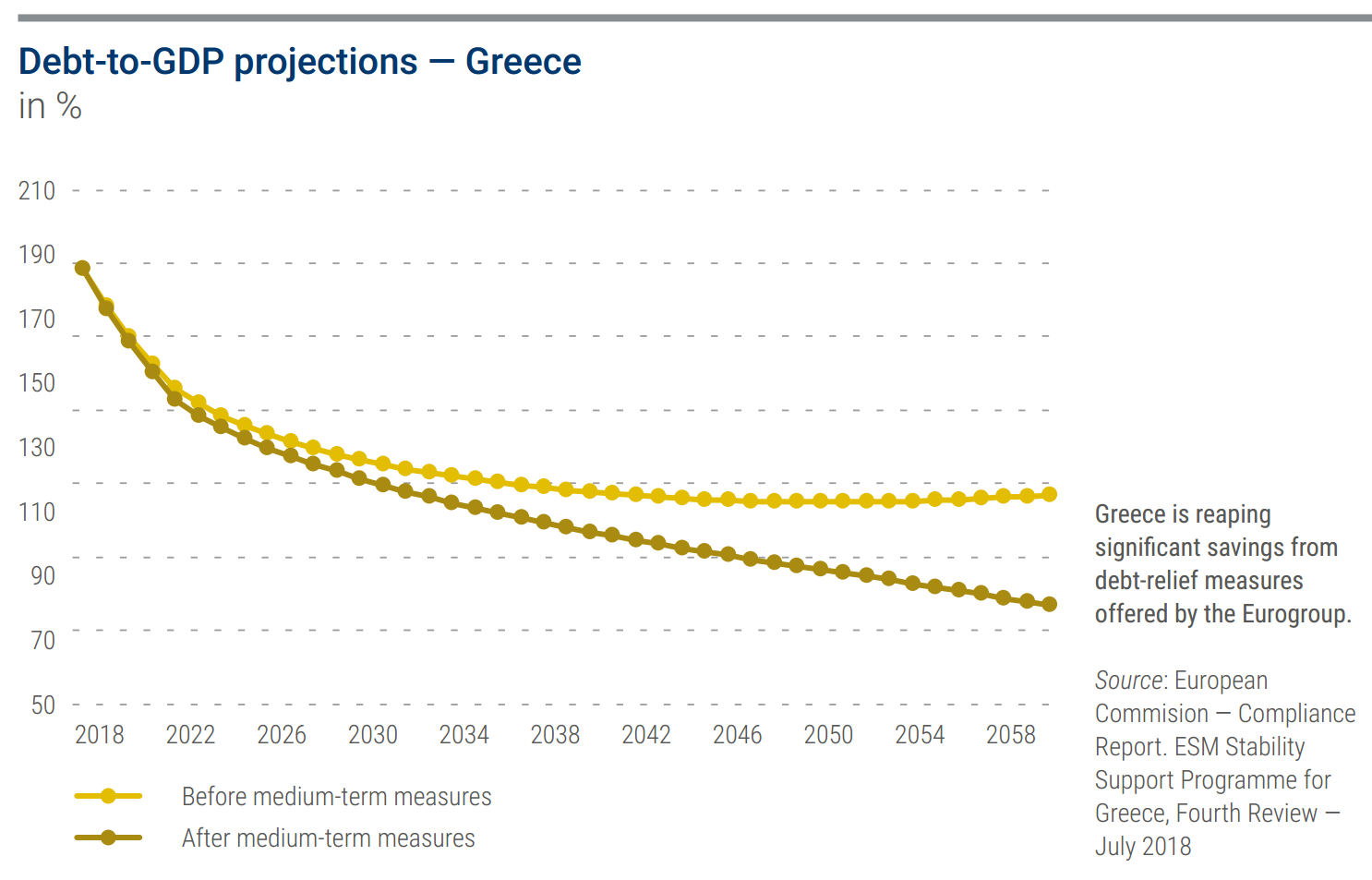 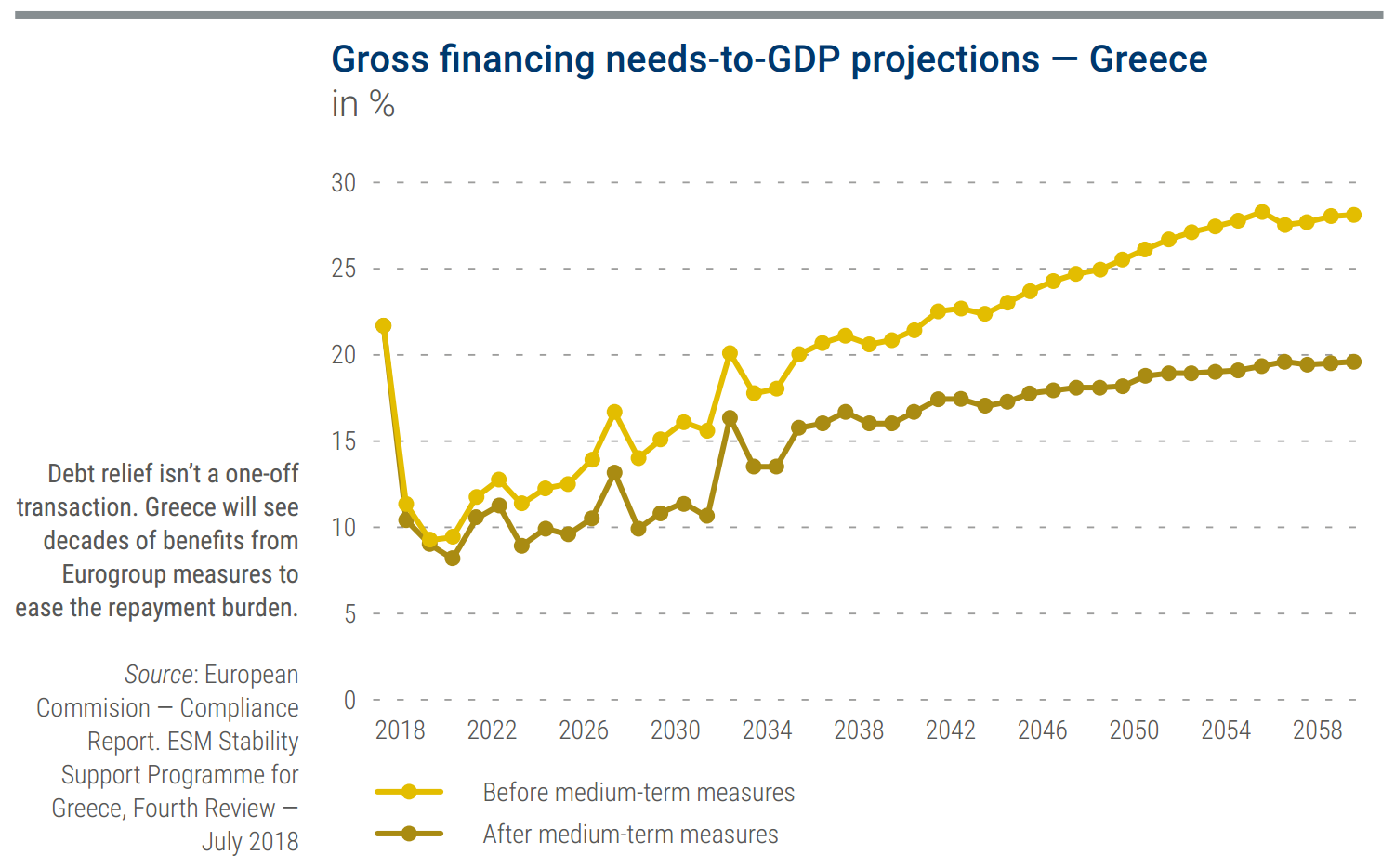 From the ESM’s perspective, what matters is that the debt sustainability analysis (DSA) by European institutions concluded in June 2018 that Greece’s gross financing needs will remain manageable[3]. The DSA is conditional on Greece receiving additional savings from the medium-term debt relief measures and on Greece following through on its economic commitments.
‘We can safely say based on the DSA of the institutions that Greek debt is sustainable going forward,’ Eurogroup chief Centeno told reporters after the finance ministers met in June 2018[4]. 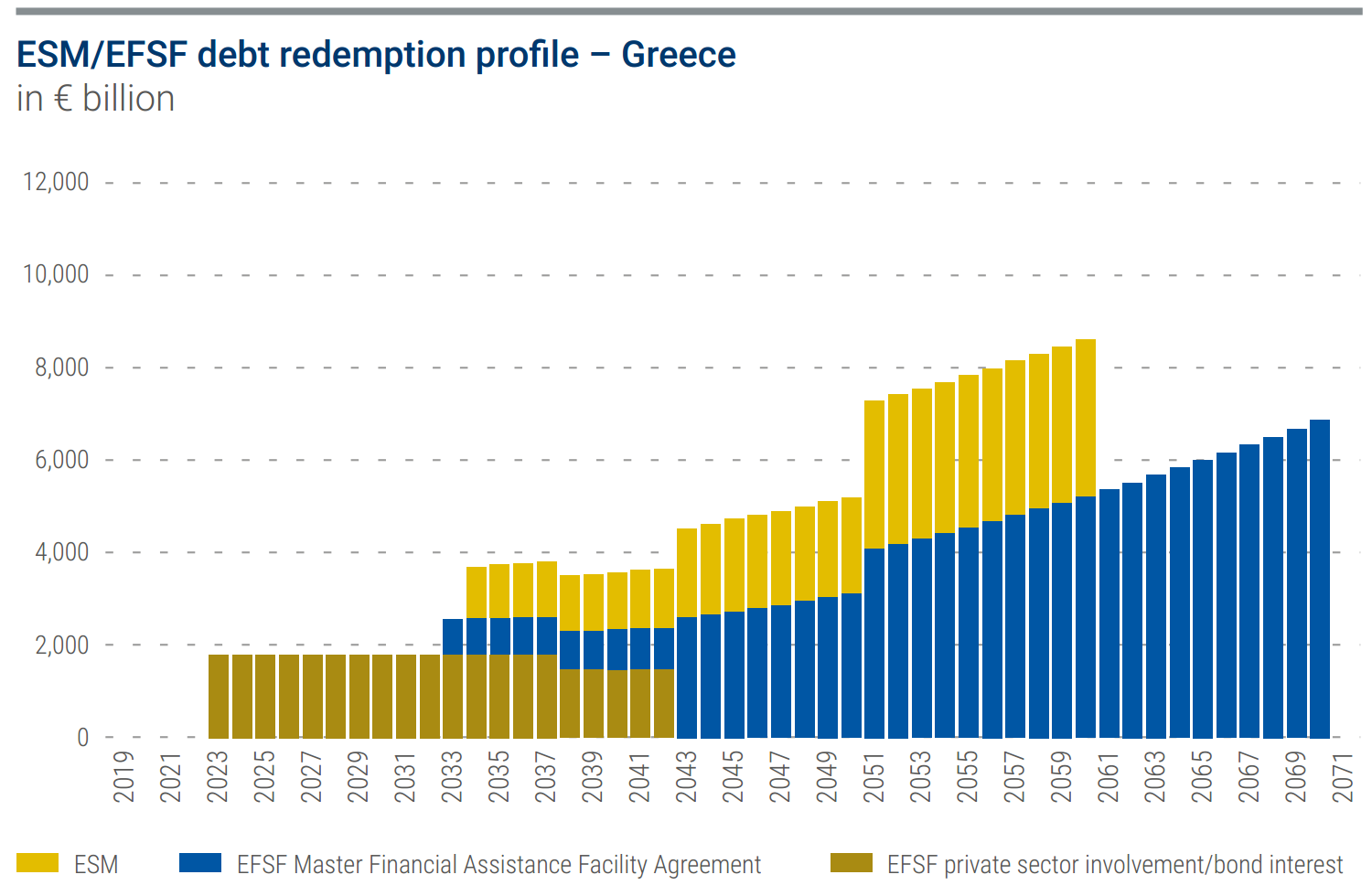