19. From bailout to bail-in: towards a new programme for Greece 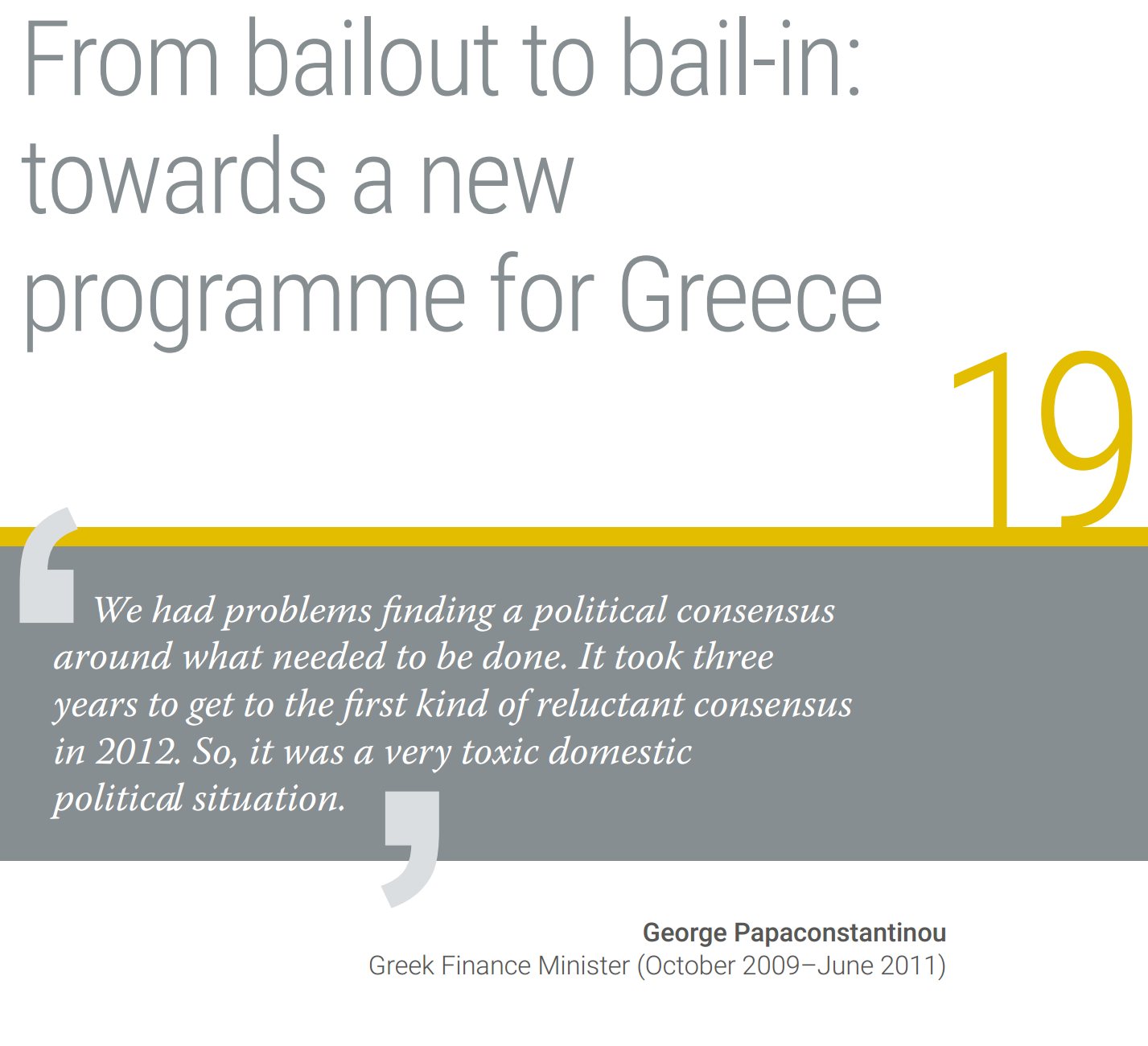 Greece was a recurring concern in the first years of the euro crisis. By January 2011, the three major rating agencies had all reduced Greece’s debt to below investment grade. Credit downgrades continued until, by the end of July, Greece was the lowest-rated country in the world[1], cut off from market financing and left dependent on outside financial help.
European policy debates reflected this slide in market confidence, as optimism evaporated that Greece could emerge from the crisis on its own. Worries about the scope of Greece’s economic challenges – and doubts about whether or not the faltering assistance programme could address them – took centre stage. 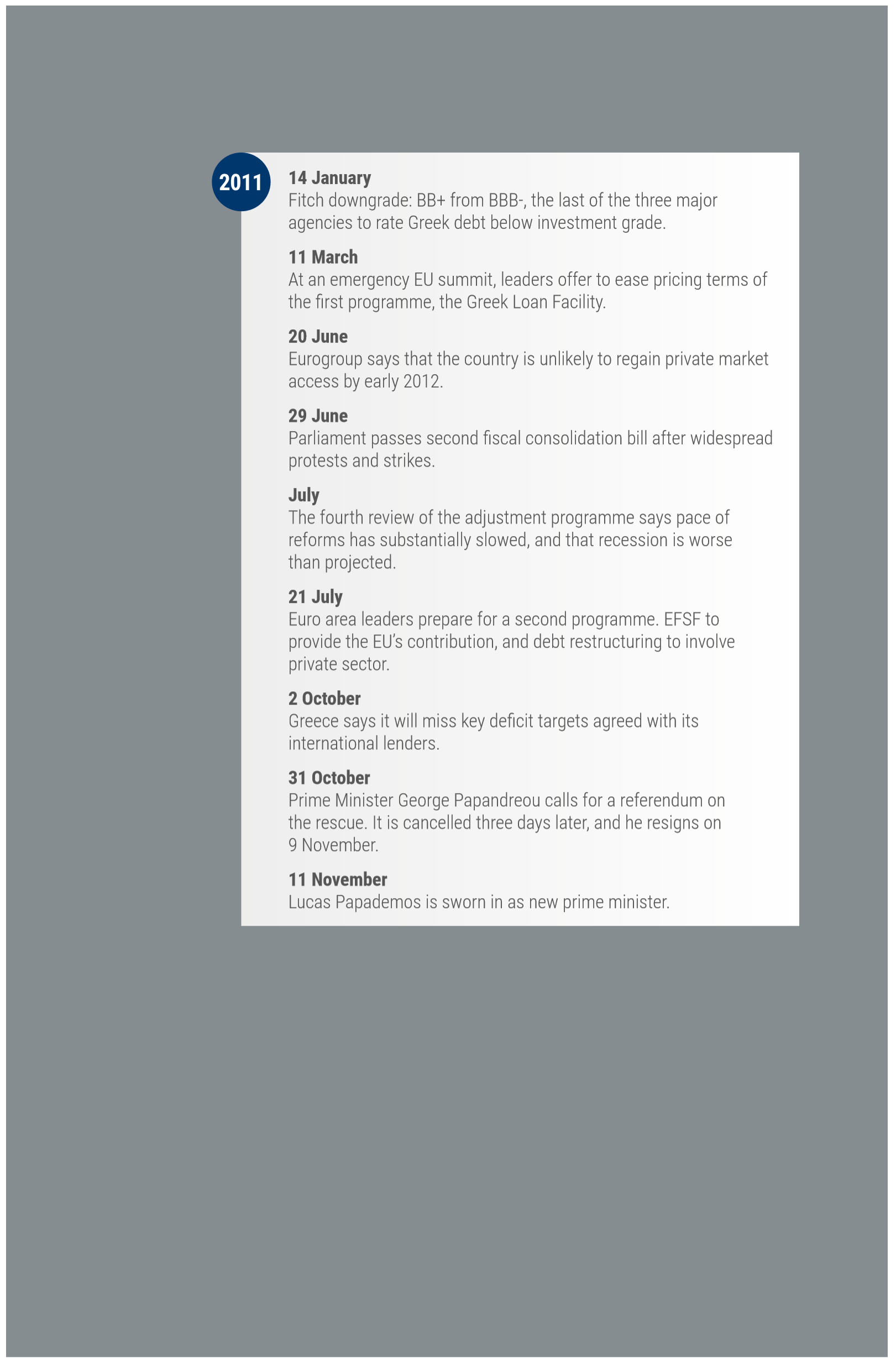 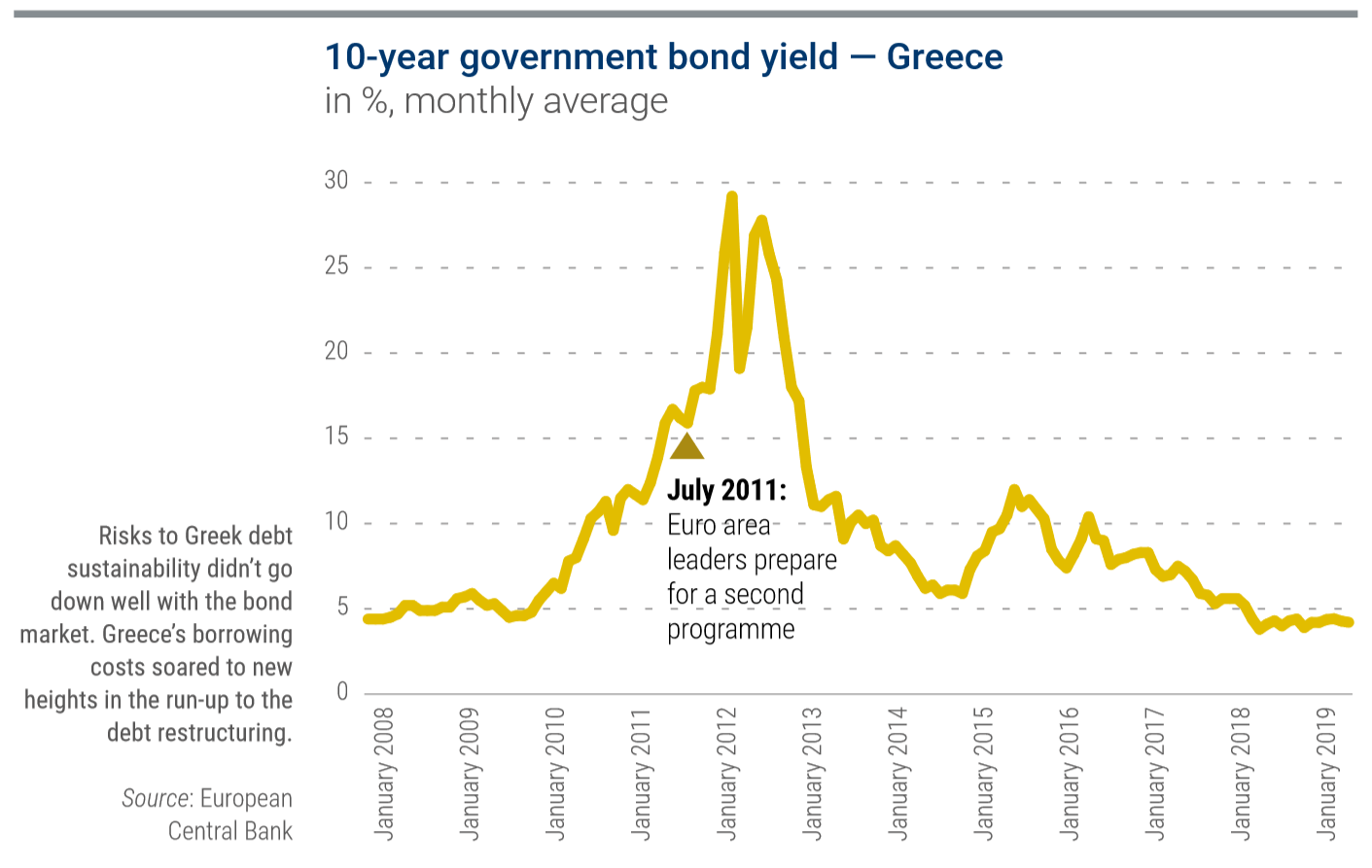 Soon after the summit, talks with bondholders got underway. For its backers, the debt exchange represented an essential step; for its detractors, it spelt financial market heresy. Greek stocks plunged, with the Athens Stock Exchange falling below 1,000 points on 8 August, the lowest in almost 15 years. Bond yields were rising precipitously.
Private investors warned that the proposed debt exchange would leave a catastrophic legacy for Europe, especially given the possibility of further losses in other countries. Josef Ackermann, CEO of Deutsche Bank, said that there were many investors in the US and Asia who would shun euro area bonds under these conditions, according to a 28 November 2011 article in Germany's Spiegel Online. ‘We will be paying a high price for a long time to come for having violated the principle that European government bonds are risk-free,’ said Ackermann, who was at that time chairman of the Board of Directors of the Institute of International Finance (IIF)[9].
IMF and EU officials had laboured with the IIF, a trade group representing the private creditors, to find a way to keep the exchange legally voluntary and thereby forestall an official declaration of default, while reaping enough savings to meet Greece’s debt targets.
Bankers and private sector holders of Greek debt weren’t alone in opposing bond writedowns. Sceptics feared that the debt swap could devastate the euro area’s marketplace credibility. Trichet, former president of the ECB, had negotiated debt relief for underdeveloped countries as head of the Paris Club of creditor countries in the late 1980s and early 1990s, and saw sovereign debt writedowns, as first raised by Germany’s Merkel and France’s Sarkozy in 2010 in Deauville, as extremely dangerous as long as they were perceived as being the general rule for all vulnerable countries. By casting sovereign debt as no longer risk free, he argued, the euro area would undermine its work to rebuild market trust in troubled economies. On the practical side, it could sabotage the health of the very countries it was designed to rescue.
The prospect of imposing losses on bondholders ‘was destroying all of our deterrent, all the deterrent of the EFSF, and also what we were doing with the ESM,’ Trichet later said. He said the euro area was able to stabilise its reputation only when it made clear that debt writedowns for Greece would be a one-off, not a required part of any rescue programme.
Trichet’s resistance was part central banker caution and part European pride, said Lagarde, who had taken over as IMF managing director on 5 July 2011. ‘For him it was just complete nonsense, an absurdity, and a dangerous path,’ she said. ‘He was concerned about the euro because he was the president of the ECB. But, as the former president of the Paris Club, which leads debt restructurings, most often of developing countries, it was just anathema to imagine an advanced country having to restructure its debt.’
Initial hopes of getting a second Greek programme in place by September proved unworkable, making global leaders nervous. On 26 September 2011, US President Barack Obama warned at a local question-and-answer meeting in California’s Silicon Valley that Europe had not done enough to combat contagion, naming Greece as the possible trigger for the next systemic shock. ‘They have not fully healed from the crisis back in 2007 and never fully dealt with all the challenges their banking system faced. It’s now being compounded by what’s happening in Greece,’ Obama said. ‘They’re going through a financial crisis that is scaring the world. And they’re trying to take responsible actions, but those actions haven’t been quite as quick as they need to be’[10].
Back in Europe, fears of a Greek exit from the euro, stoked by the Luxembourg castle meeting in May, became more prevalent[11]. In October, the government in Athens said Greece would not be able to meet the 2011 or 2012 deficit targets it had agreed with its international creditors because of the unexpected harshness of the recession.
Crisis diplomacy in late October focused on the bond writedowns, seen as the key to unlocking more aid for Greece. To win the investment community’s acceptance of the unprecedented step and prevent it from sapping confidence in the bonds of other distressed countries, euro area leaders made the case that the Greek restructuring was a one-off due to the ‘exceptional’[12] nature of Greece’s economic troubles. 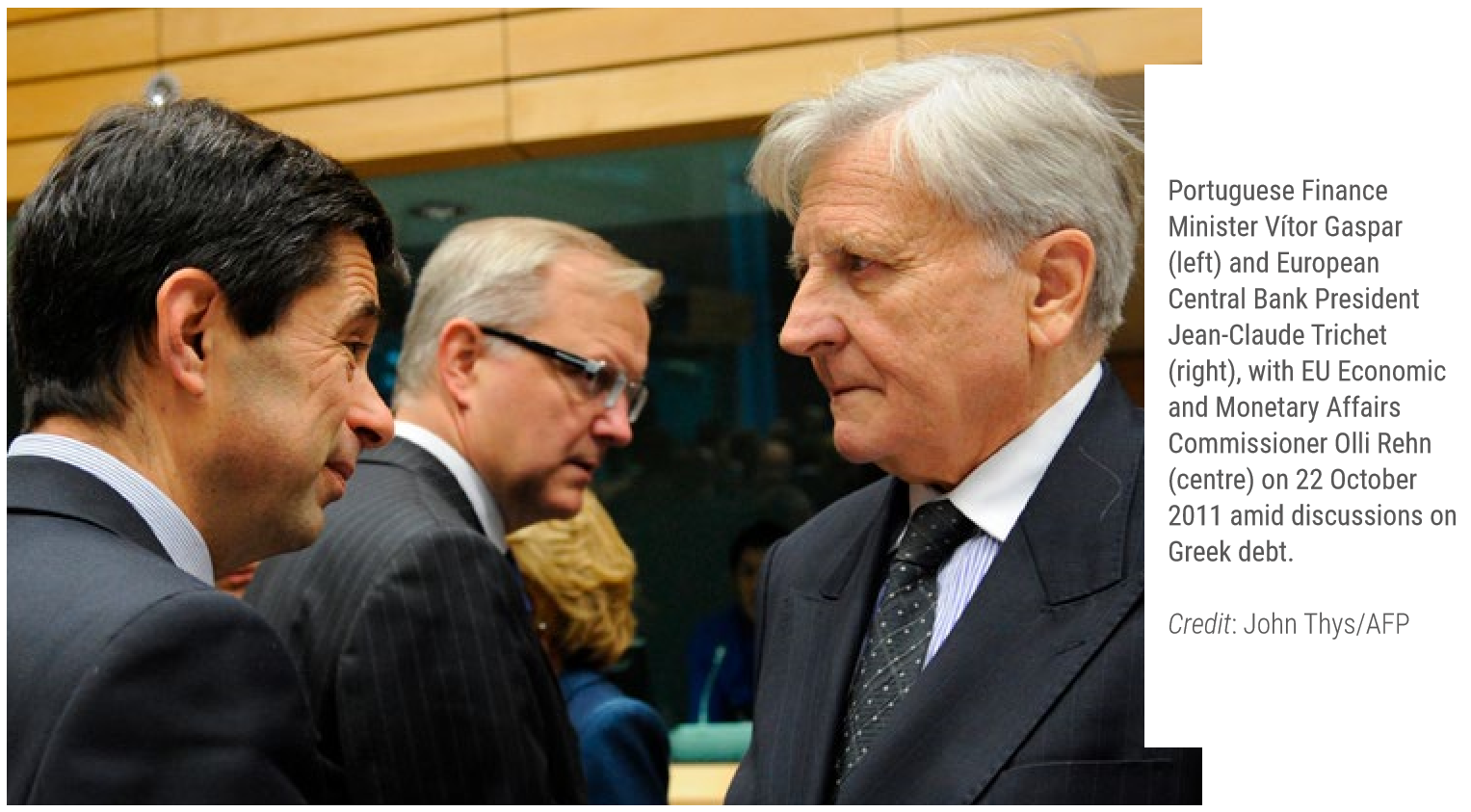 ‘All other euro countries solemnly reaffirm their inflexible determination to honour fully their own individual sovereign signature and all their commitments to sustainable fiscal conditions and structural reforms. The euro area Heads of State or Government fully support this determination as the credibility of all their sovereign signatures is a decisive element for ensuring financial stability in the euro area as a whole’[13], the leaders said in a summit statement on 26 October 2011.
In Greece’s case, the leaders said that bondholders would have to take a roughly 50% haircut as part of a new aid package. The leaders set a goal of end-2011 to sign off on the programme, with the bond swap scheduled for early 2012. Haunted by the threat of a market panic, the October summit statement acknowledged the global worries and proposed what was intended to be a comprehensive plan because ‘further action is needed to restore confidence’[14].
At this point, Greek Prime Minister Papandreou surprised everyone on 31 October 2011 by calling for a referendum on the outline of the rescue plan[15]. At a 3 and 4 November summit of the Group of 20 countries in Cannes, France, Merkel and Sarkozy led the euro area in laying down the gauntlet, telling the Greek leader that his referendum would in effect be a yes or no vote not just on the rescue, but on Greece’s euro membership.
When, on the eve of the summit, Papandreou arrived unexpectedly to inform Sarkozy and Merkel about the referendum plan, they opposed it immediately, the IMF’s Lipsky said. ‘The impression was left that in addition to objecting to the proposal to hold a referendum, the two key leaders had lost confidence in him personally.’
Papandreou called off the referendum on 3 November and Greece’s political class moved to form a unity government without him[16]. On 10 November, Papandreou formally resigned[17] and the next day former ECB Vice President Lucas Papademos was sworn in as prime minister.