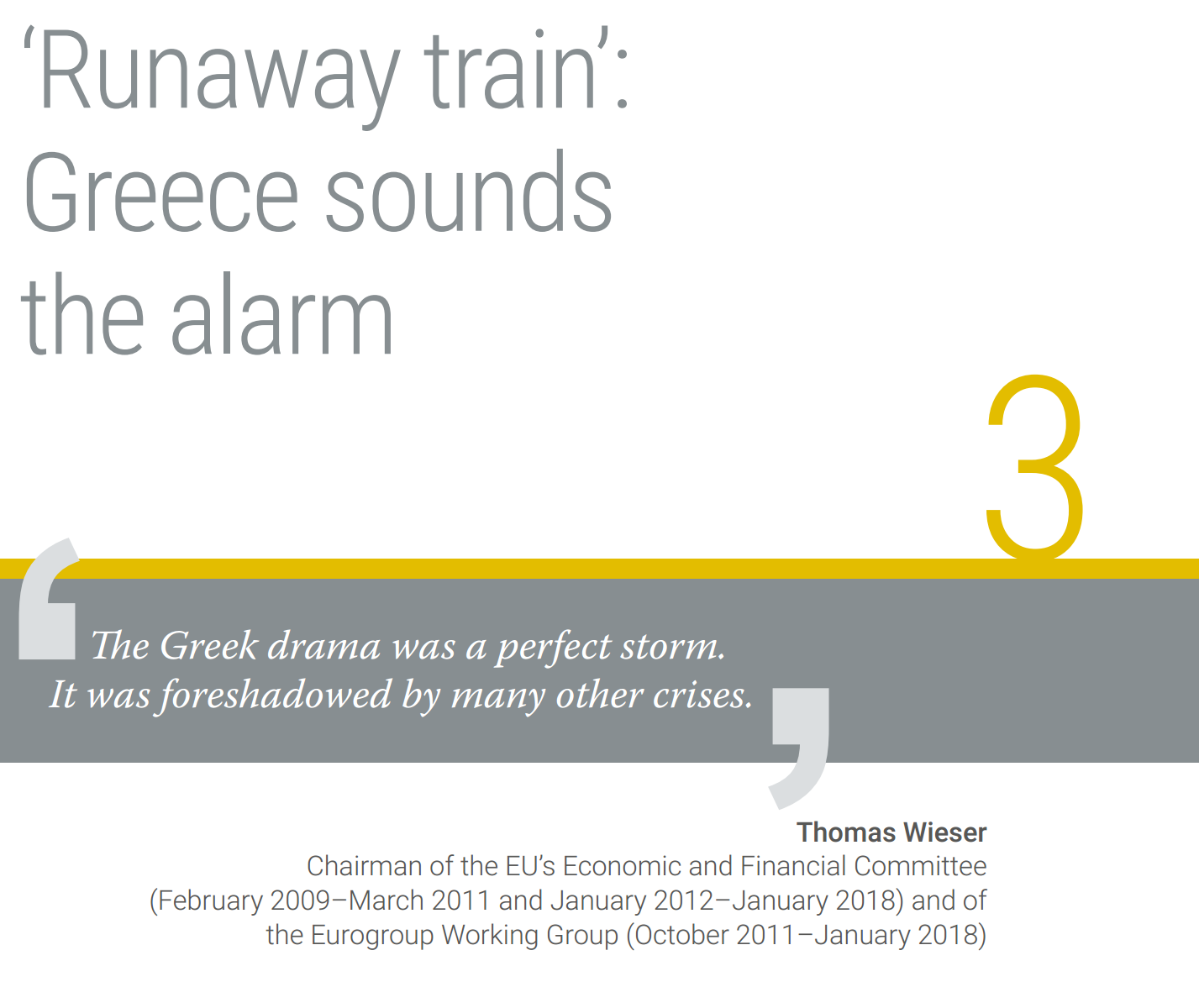 The euro’s prospects darkened in October 2009, when a newly elected Greek government led by George Papandreou announced that the country’s budget deficit was a lot higher than initially reported. When the incoming administration reviewed the figures, they saw that the country’s budgetary gap, or the shortfall between revenues and spending, was projected to be around 12.5% of gross domestic product (GDP)[1]. That contrasted with the 3.7% of GDP projection submitted by the previous government and was four times the maximum threshold of 3% set out in the euro area’s budget guidelines.
Given the exceptional circumstances surrounding the global financial turmoil, these budget targets had been relaxed, but they still offered a gauge of how far off the mark Greece had fallen. 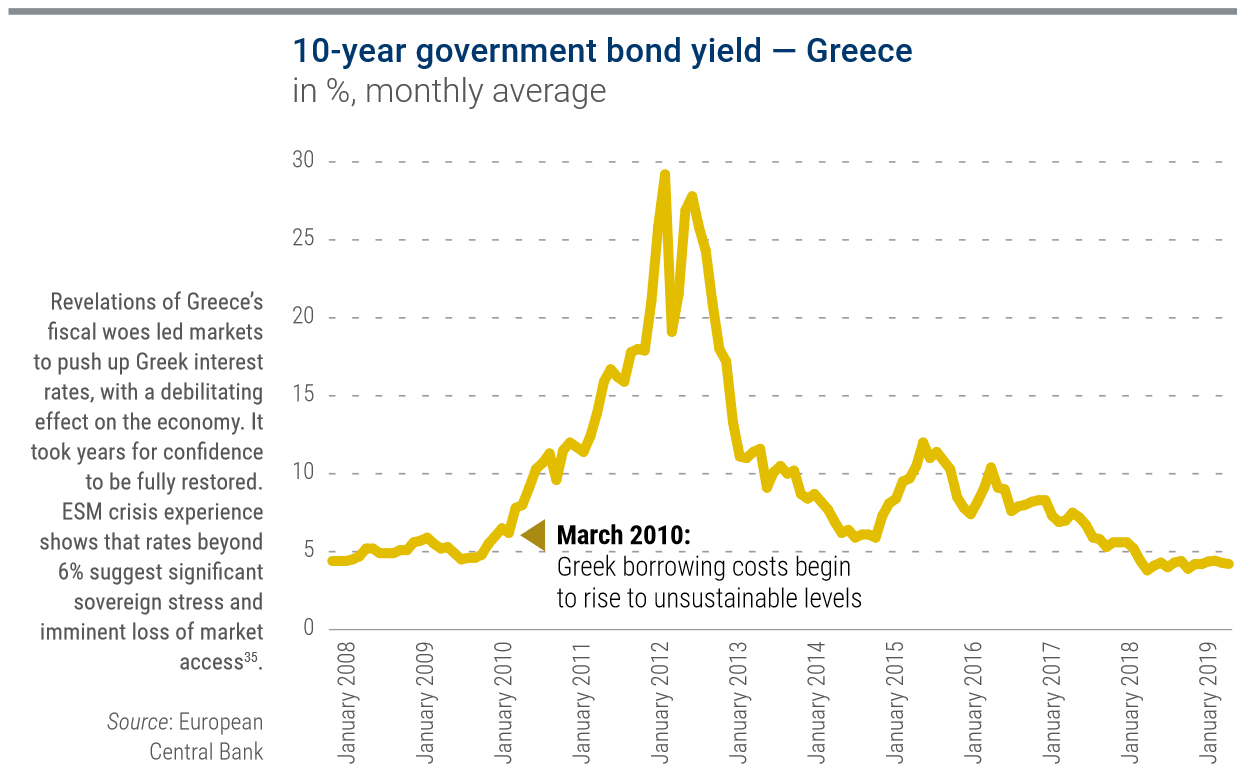 [17 - for chart footnote]
On 15 April, the Greek government asked the Commission, the ECB, and the IMF to start talks about a multi-year assistance programme. The IMF’s Strauss-Kahn agreed to send a team to Athens the following week, to prepare ‘in the case that the authorities decide to ask for such assistance’[18]. On 22 April 2010, Eurostat reported a Greek 2009 deficit of 13.6%[19], and bond yields soared to an average 7.8% in April from already unsustainable borrowing levels in March. A day later, the Greek government finally applied for help[20]. The estimates for Greece’s 2009 deficit would later top 15%, with Eurostat in November 2010 putting it at 15.4% of GDP[21]. 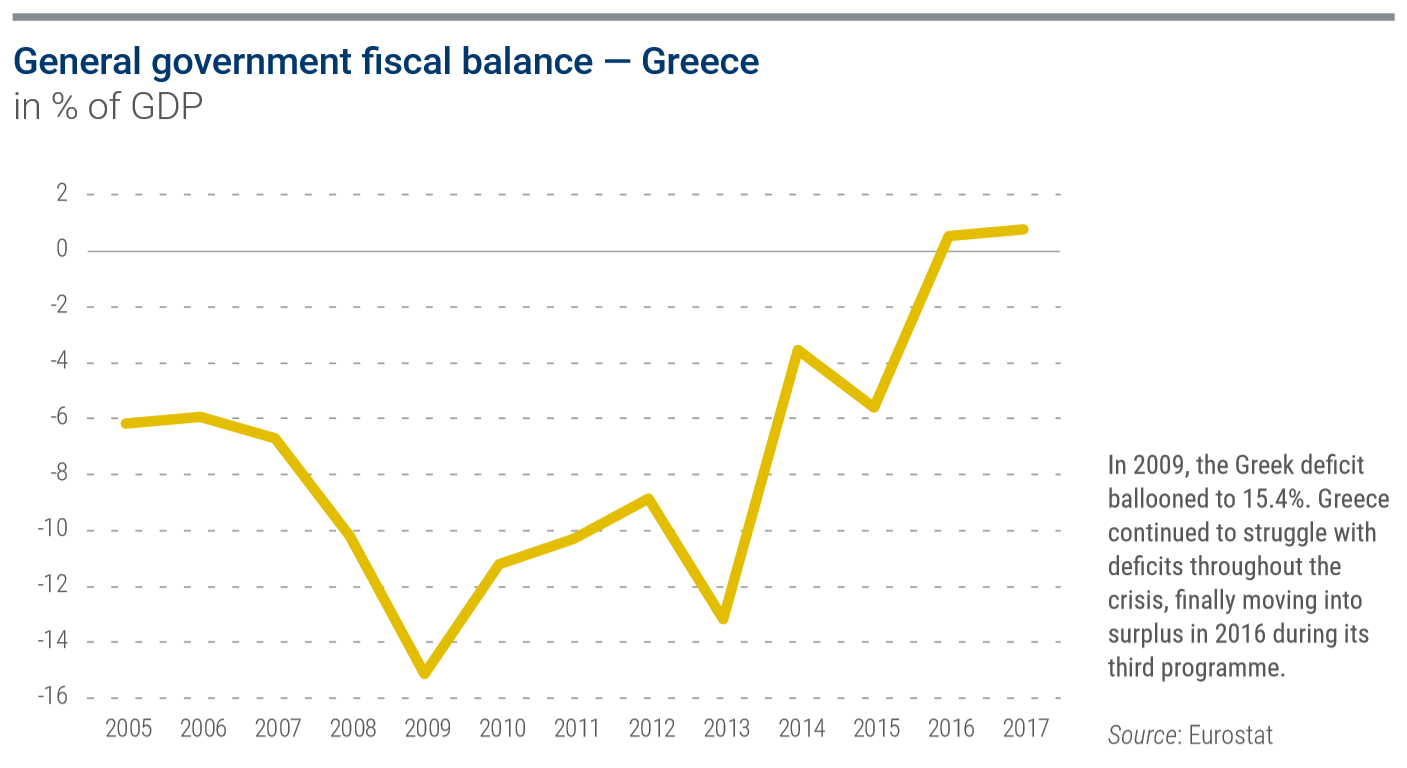 The need to act together was becoming clear, even in countries critical of Greece. The fervour of German tabloids was widely reported[22], with their stark headlines, such as: ‘The Greeks want even more of our billions!’ There were many sympathetic voices, too. In a 3 May 2010 article headlined ‘We’re buying Greek government bonds!’, the editor of the German economic daily Handelsblatt asked readers to demonstrate trust in Greece by buying Greek government bonds and said that he himself had bought €5,000 worth[23]. The Dutch business daily Financieele Dagblad on 30 April 2010 said ‘The moment has come to support Greece’[24]. But, capturing the mood in Germany, the usually reserved Die Zeit cried, ‘Greece has violated all the rules of economic rationality’[25]. 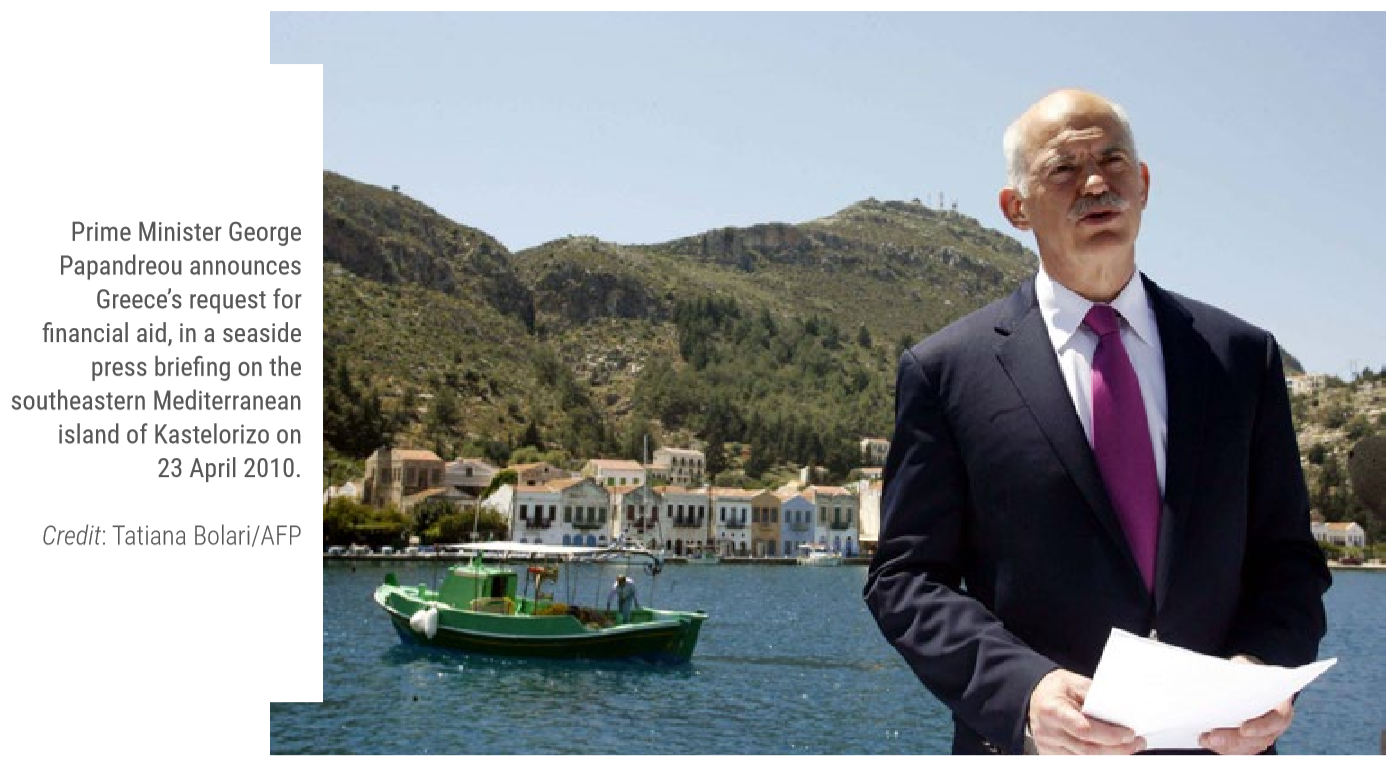 After the Greek request, the aid talks moved quickly. On 2 May 2010, the Eurogroup agreed to provide bilateral loans managed collectively by the Commission in the Greek Loan Facility up to a total amount of €80 billion, to be released over the period May 2010 to June 2013[26]. Germany committed the largest share of any euro area member state, pledging to offer up to €22 billion. But, unlike other member states, which funded the Greek loans directly, Germany delegated the credit line to its state-backed development bank, KfW[27]. Alongside the euro area, the IMF put up an additional €30 billion under a stand-by arrangement.
Subsequent to the May 2010 deal, the headline amount in the Greek Loan Facility was reduced by €2.7 billion, in part because Slovakia decided later in 2010 not to participate, and in part because Ireland and Portugal stepped out once they requested financial assistance themselves[28]. Overall, the difficult shared effort to make individual loans to Greece underlined the need for an alternative approach.
‘In principle, it would have been preferable to calculate the fiscal needs on the basis of a debt sustainability analysis. But, in practice, the spending limit of the Greek Loan Facility created a ceiling that could be used for the fiscal rescue of Greece,’ said Rehn, who was then the European commissioner for economic and monetary affairs and the euro. He credits Strauss-Kahn with making efforts to ensure the IMF’s contribution was as high as it was.
Even though the initial design was far from ideal, the euro area and its allies had come together to protect the currency union. ‘The idea behind the Greek Loan Facility was: we’ll do something for Greece now quickly,’ Verwey said. ‘Because people feared there would be contagion if we didn’t take action. They were especially afraid of contagion through the financial channel, through bank exposures to Greece – in countries other than Greece – so something needed to happen.’
The worries were justified. EU banks held around €95 billion in Greek government bonds, according to a May 2011 report by Moody’s[29], which noted ‘above-average’ exposures in Belgium, Germany, France, Cyprus, and Luxembourg. At the time, however, the prevailing wisdom in Germany and elsewhere was that Greek profligacy was to blame for the crisis.
To access the Greek Loan Facility funds, Greece agreed to a new wave of fiscal consolidation, on top of the cuts that were already underway, to prune its deficit to 2.6% by 2014[30]. There were revenue-raising measures worth about 4% of GDP over the programme period, mostly by increasing the value added tax, for example on luxury items, tobacco, and alcohol[31]. The programme aimed to modernise public administration, sell off state-owned enterprises, and slash defence spending while building a rational social safety net. It also set aside funds to shore up the banks and set up a structure to deal with financial stability.
Wage and pension cuts were at the heart of the efforts. The programme called for reductions in government entitlement and retirement programmes across society. ‘Selected social security benefits will be cut while maintaining benefits for the most vulnerable,’ the IMF said. ‘Comprehensive pension reform is proposed, including by curtailing provisions for early retirement’[32]. The public sector was further targeted. Its administrative apparatus ‘was way less advanced than many would have thought,’ for example lacking a common registry for state employees so it was impossible to know how many there were, according to the euro area rescue fund’s Chief Economist Rolf Strauch.
The plan called on Greece to reduce and freeze pensions and wages for government workers, and it abolished the workers’ Christmas, Easter, and summer bonuses. The freezes would be in effect for three years, and the total effort included a wide range of measures. For example, it was designed to slash 5.25% of GDP in government spending through 2013, while raising 4% of GDP through various revenue measures. There were protections for the lowest-paid workers, and Greece was also supposed to strengthen its tax collection and budget controls to gradually recoup savings of 1.8% of GDP through structural reforms[33]. ‘A significant real devaluation – in other words a cut in real income – was unavoidable not only to reduce the fiscal deficit but also to improve competitiveness quickly,’ Regling said. 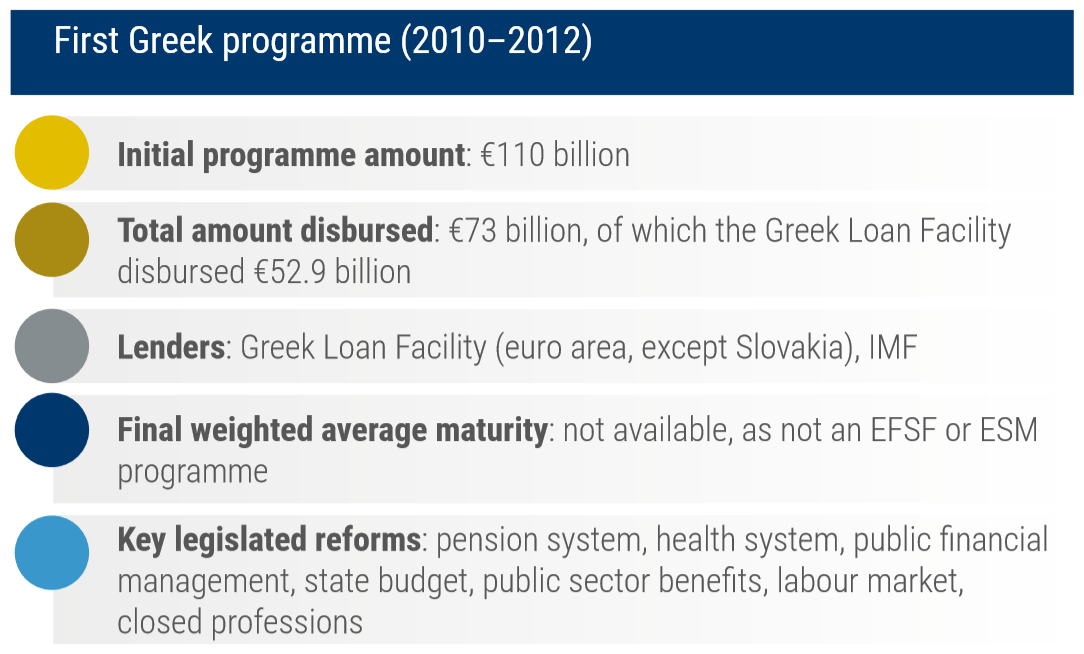 The scope of the plan reflected the limits of what the euro area was able to offer Greece at the time, coupled with optimistic expectations about what Greece would be able to accomplish. This would eventually require the euro area to create its own aid fund, rather than stick with the loan facilities set up in Greece’s first rescue.
‘Perhaps we were too naïve about the Greek authorities’ willingness and ability to implement the structural reforms that were called for in that first programme,’ said John Lipsky, then the IMF’s first deputy managing director. ‘Long story short, very few of the agreed structural actions were implemented, and in total, the few that were undertaken were largely ineffective.’
The continued market volatility made it ‘obvious that some kind of funding mechanism was needed,’ Lipsky said. ‘It was only at the last minute, in the face of impending disaster, that agreement on the EFSF was reached.’
Its own budget efforts notwithstanding, Greece became increasingly unable to quieten market fears on its own, Papaconstantinou recalled. ‘The markets were not just looking for a fiscal consolidation attempt,’ he said. ‘The markets were looking for a backstop. They were looking for a guarantee of no default. And that was beyond us. This was not something we could do. This had to do with the collective response from the rest of the Union.’
In the week after the euro area signed off on the first Greek programme, the package made its way through national approval procedures and became ready to deploy. But there was no time to celebrate. ‘Eventually, the Greek Loan Facility was approved by the parliaments,’ Verwey said.
‘The last approval was received on 7 May, a Friday. But on that same day, the contagion was already there,’ he said. ‘By then it was clear we needed heavier ammunition.’