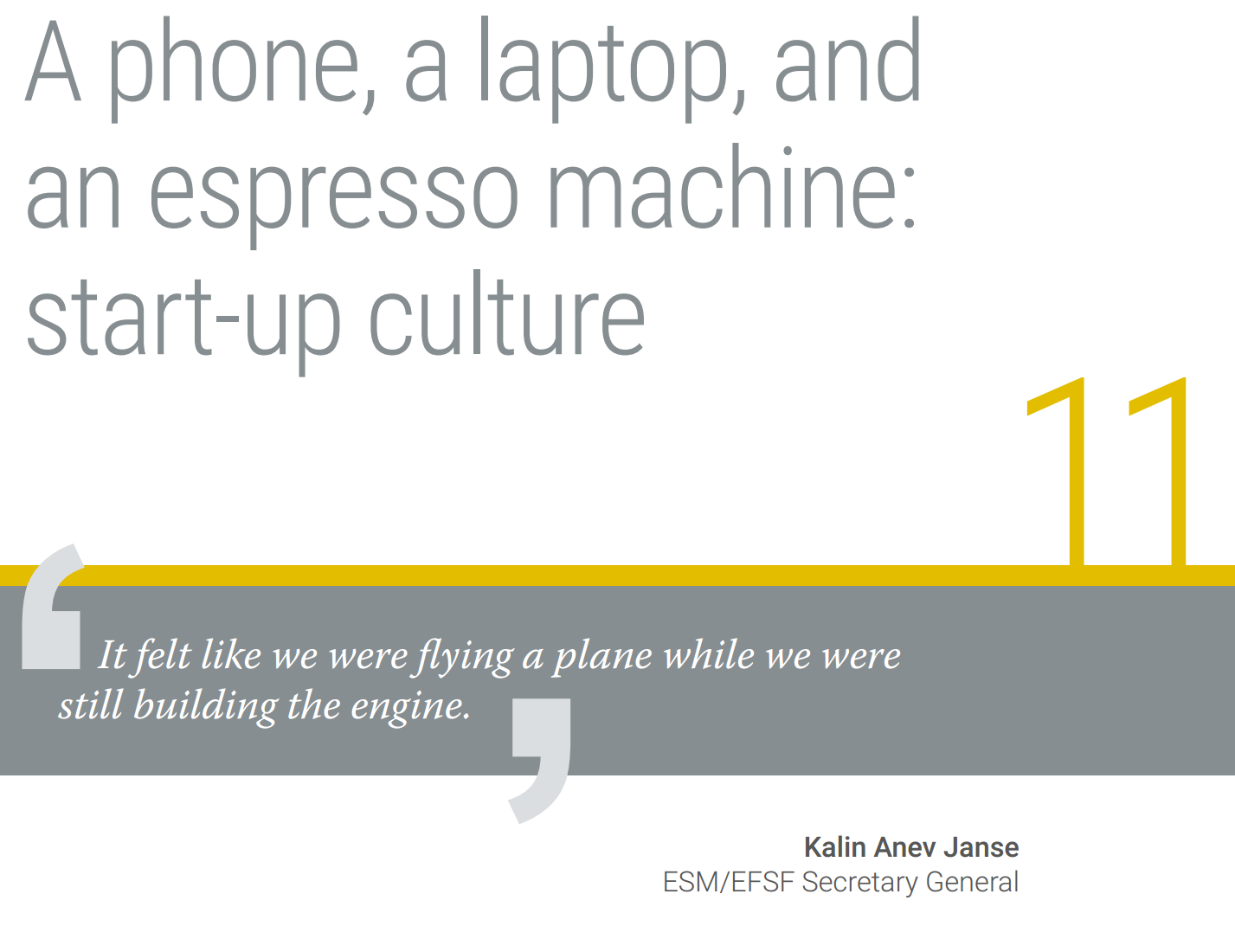 A small suite of old-fashioned offices provided the firewall’s first home. Even those were a step up from Regling’s personal laptop and telephone, which constituted the fund’s entire infrastructure for his first weeks as chief executive in June 2010. When Regling was hired, the EFSF existed on paper only. The rescue fund needed to be built from the ground up, under intense time pressure.
‘My contract started on the 1st of July, but I basically started working in the middle of June, just going back and forth between Brussels and Luxembourg,’ Regling recalled.
After the decision was taken to base the EFSF in Luxembourg, Regling’s next task was to rent an office. The EIB, which had offered set-up help, suggested one of its nearby facilities. But the space was larger than the new firewall needed, so Regling protested: ‘It’s too big! I will only take half of it and pay half the rent.’ 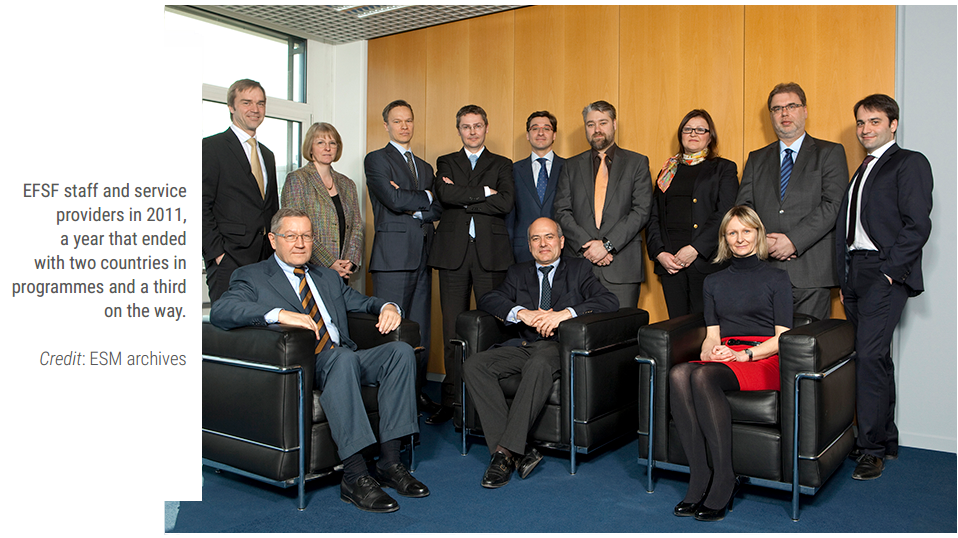 The EIB agreed, but 18 months later it handed over the other half of the space as the EFSF’s responsibilities expanded.
Those first offices sported blue carpet and wood panelling, harking back to stodgy 1970s interior designs for bureaucracies. Apart from the dated décor, the office wasn’t so bad, said Denise Franzen, one of the original dozen pioneers and the EFSF’s first office manager. But getting space was only part of the struggle of setting up a new entity. Conference rooms are useless without people to meet in them, and more colleagues needed to make it to Luxembourg, too.
In the early days, the EFSF resembled a hastily set-up campsite. Minor irritations were the order of the day. At times, Regling was left on his own to search for the last remaining cream for his coffee, and someone had to find out how to order new supplies. It turned out to be crucial that the EFSF’s first ‘investment’ was a sturdy espresso machine, which is still performing its duties to this day. 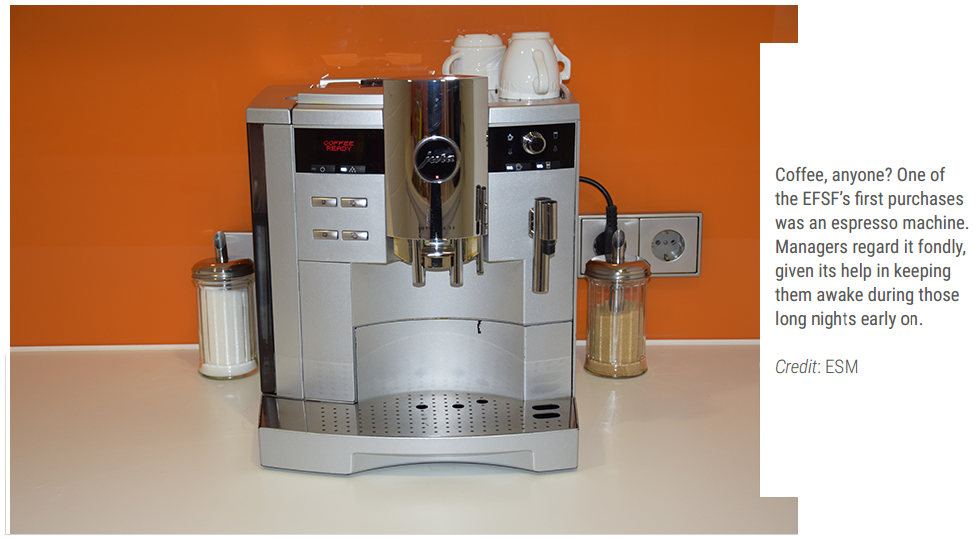 At the time, Franzen was doing everything from purchasing coffee and settling invoices to paying out salaries to the burgeoning staff and reviewing speeches for the head of press relations. Regling would check in on how things were going, but he was on the road so much that most of the planning fell to Franzen and the skeleton crew holding the fort. ‘It was challenging and interesting. Everything had to be in place more or less immediately. I cooperated closely with Klaus’s personal assistant, and, because we had such good understanding about what needed to be done, things ran smoothly despite a rapidly changing environment.’
That informality came with perks and costs. Françoise Blondeel, now a management board member, said the new EFSF had to press ahead with few set procedures in place on such things as budgeting, choosing suppliers, and other logistical matters.
‘Because we were new, we had fewer internal rules to comply with,’ said Blondeel, who ran the rescue funds’ middle and back office when she joined in early 2012. ‘But we always adhered to the highest professional standards. In those early days, the middle and back office team put in a lot of hard work, with high-quality results, despite their small numbers.’ 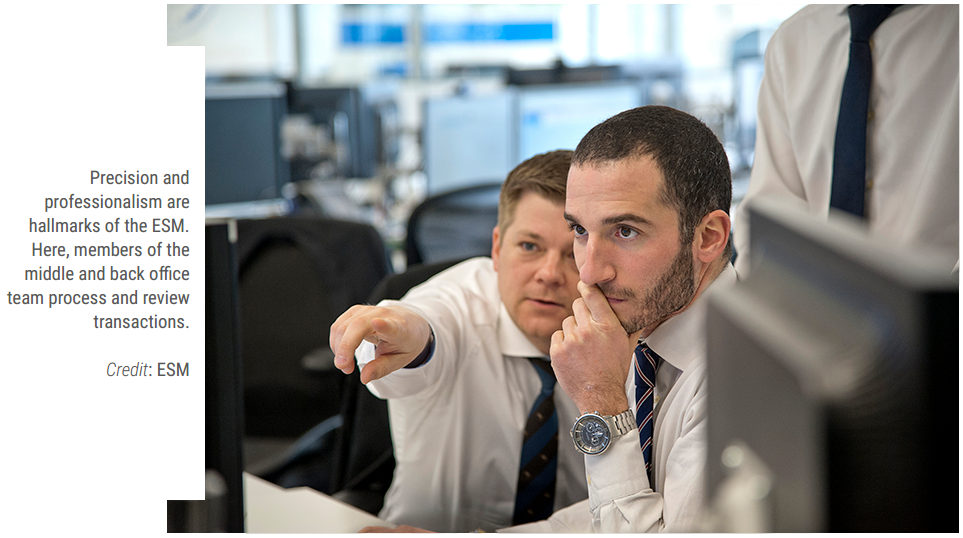 The initial goal was to make the temporary firewall as lean as possible, with a staff of only a dozen. In addition to the challenge of finding the right people for those spots, they needed phones, computers, desks, and office space. More importantly, this small team needed to be ready for its mission. That meant building the appropriate operating chain, including choosing, following a fair and competitive tender, the right bank and other financial suppliers to process the flow of funds in a fast and secure manner as well as establishing the appropriate information technology infrastructure to record those flows correctly. It also entailed defining and negotiating legal agreements that would protect the interests of the institution.
One of Regling’s first hires was Sarah Fouqueray-Carrick, a French-speaking Briton with a background in private sector asset management. Fouqueray-Carrick had just resigned from a French firm to set up a translation business that would require less travelling and allow more time with her small children.
‘I had just taken the summer off and I was in the process of setting that up and, out of the blue, a friend of a friend contacted me saying, “Are you interested? They want someone with a marketing/communications background who can write well in English,”’ Fouqueray-Carrick recalled. She responded that she’d just stepped back from intensive work because it was too chaotic and interfering with family life. The friend of a friend told her not to worry.‘You can work part time because, actually, you may have nothing to do.’ With those famous last words, she became employee number four, off to rattle around the EFSF’s first suites.
‘We occupied just a small corner of the building; the rest was all empty,’ she said. ‘It was this big corridor with empty rooms, and then this big empty space at the end.’
It soon became clear that writing for the EFSF would require her to be quick on her feet. On Fouqueray-Carrick’s first day, she was asked to complain about an article that appeared in a major UK newspaper. ‘That was my first task, to write a stern letter to the author to say he was incorrect on many points.’ Letter dispatched, she began to take a more systematic look at how the EFSF would keep in touch with staff and stakeholders while its top leaders were educating the markets and the media about its bonds. Her core duties of communications and investor relations became paramount.
‘Klaus Regling and [CFO] Christophe Frankel were out on the road all the time meeting investors,’ Fouqueray-Carrick recalled. ‘That was the best policy: to make sure people were as informed as possible and to make ourselves available. We were taking calls night and day from journalists, because there were so many rumours swirling and it was very important to get the factual information out to them.’
To keep the messages straight, the firewall hired a German journalist to deal with the press. He set up a regular conference call to coordinate with the European Commission, the ECB, and other key institutions, making sure all the organisations were taking the same line. ‘That was just a basic thing, but it was really important,’ Fouqueray-Carrick said. ‘He established quite quickly the discipline of coordinating what was said.’
Investors noticed, too, said Frankel, which reinforced the decision to put communications at the top of the in-house agenda. ‘That’s why a communications specialist was one of the first hires,’ Frankel said. ‘It was obvious that good communications were crucial to the success of this company, for various reasons: communication towards investors, the press, shareholders, the IMF, and the other institutions.’
Not only did the EFSF have to win over the bond markets, it also had to keep up with its new peer group of international financial institutions. ‘They had to see us as a peer, but we were initially perceived as the new kid on the block who was still learning,’ Secretary General Anev Janse said.
As with all start-ups, everyone had to be a jack of all trades, and tasks were carried out – at first – in an ad hoc manner. As the organisation grew, the EFSF added weekly staff meetings in 2011 to make sure important details didn’t get lost in the shuffle. These continue today. ‘Having a better global overview of what was upcoming in the new institution improved our daily work,’ Franzen recalled. ‘With the weekly staff meeting I knew what to expect the coming week.’ 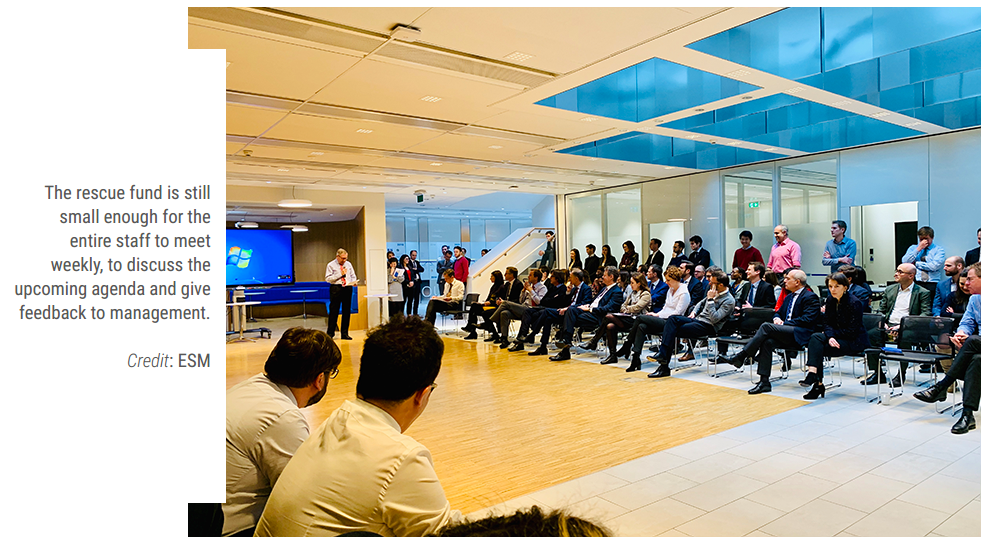 As the firewall staff grew, its mandate provided both recruitment incentive and ongoing motivation, said Sofie De Beule-Roloff, head of human resources and organisation. ‘Here at the ESM/EFSF you feel very involved in the mandate and its social contribution to Europe – it’s not just a distant concept you see on the television news,’ she said. ‘Even those teams not in direct contact with our programme countries feel constantly connected and involved in the mission. This engagement and connectivity is exactly what drives our people and what makes them go the extra mile over and over again.’

Institutional history continues in Chapters 21, 28, and 30.