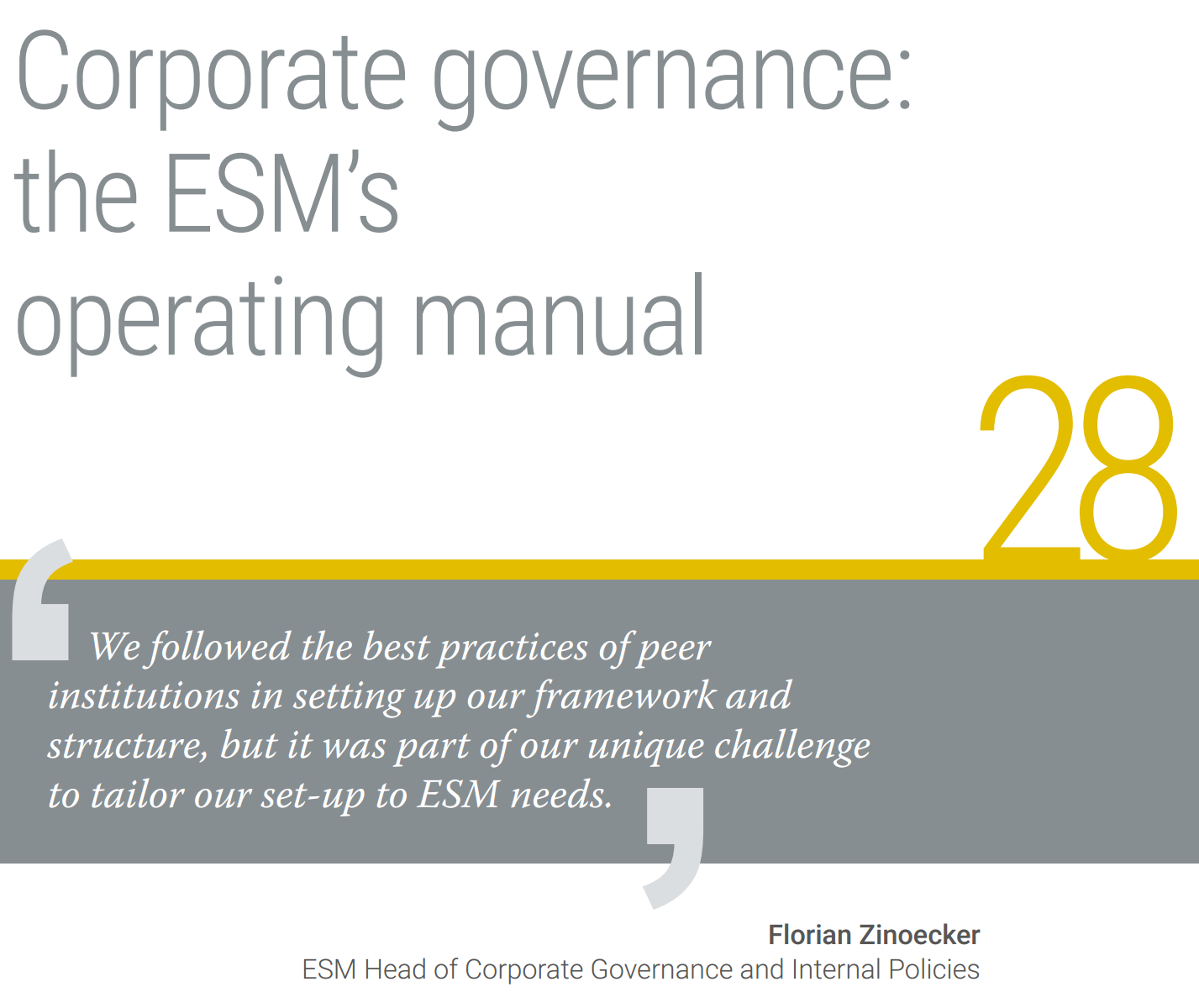 Even before the ESM became a permanent fixture, the need for a governance framework for Europe’s newest international financial institution became pressing. Secretary General Anev Janse had worked hard to establish strong relations between the institution and its governors and directors. When Florian Zinoecker, the ESM’s head of corporate governance and internal policies, joined on 1 July 2012, he was given little time to craft the ESM’s Board structures and procedures, and distil them into legal form.
‘We had literally the summer and a month to finalise all these important governance policies,’ Zinoecker said.
The ESM had templates to go by, of course. Alumni of the EIB, the IMF, or the European Bank for Reconstruction and Development would instantly recognise the ESM’s three-tiered structure; however, none of those were an exact fit for the new firewall. The objective was to set up a governance structure for an effective and fast-paced crisis response mechanism that would also safeguard transparency and accountability at the highest levels.
At the top is the Board of Governors, made up of finance ministers of the euro area countries, who set the strategic direction and take critical decisions on rescue programmes. One level down is the Board of Directors, composed of the ministers’ deputies or other high-profile officials from the ministries of finance, with more hands-on operational responsibilities. Anchoring the system is the Luxembourg-based Management Board, headed by the ESM managing director, which prepares and implements the decisions of the Board of Governors and the Board of Directors and conducts the ESM’s current business.
The ESM has a streamlined organisational structure, without the rotating casts of national appointees typical of some other international or European financial institutions. The managing director, Regling, is the sole Management Board member appointed by the ESM Board of Governors; the remaining five members were appointed by Regling from within the ESM’s expert ranks. The governing bodies make decisions on proposals from the ESM managing director. In terms of accountability, the ESM governors are the finance ministers of the euro area countries and, as members of the national governments, they are accountable to their national parliaments. Some ESM Members also conduct national parliamentary procedures to approve important ESM decisions.
As part of its governance and proactive shareholder relations, ESM staff are in frequent contact with national finance ministries, often through a secure online gateway called the ESM Board Portal, which enables the posting of documents and agendas. In addition to day-to-day contact with other institutions regarding programmes and other operational matters, there are regular conference calls in which Luxembourg-based staff and national officials discuss matters such as the ESM’s annual budget, financial statements, and the code of conduct. These technical calls facilitate consensus on draft proposals that are sent to the Board of Directors for approval and are an ‘essential feature’ of the ESM’s interaction with the national ministries, Zinoecker said.
Regling often meets with national parliaments across Europe to explain the purpose or specific actions of the rescue fund and its role in euro area governance. When Latvia adopted the euro in 2014 and Lithuania followed a year later, Regling briefed parliamentary committees in those countries on the ESM’s structure and functioning. On a voluntary basis and in the spirit of transparency, Regling has also had informal exchanges of views with European Parliament committees and working groups.
Once a year, in September, the ESM hosts a two-day seminar – ESM Shareholders’ Day – with national finance ministry officials to help deepen their understanding of the rescue fund’s inner workings. During the rest of the year, national officials and parliamentarians are regular visitors to the ESM’s headquarters.
In keeping with its nature as a crisis response vehicle, the ESM can act rapidly when it has to. Standard notification periods for conference calls, technical talks, document preparation, and meetings of the Board of Governors or Board of Directors can be accelerated in the heat of a crisis.
‘We have provisions for very urgent decisions that we had to resort to for programme countries,’ Zinoecker said. ‘We can also shorten our standard timelines for other urgent decisions.’
Intense work on the governance structure in the summer of 2012 culminated with the inaugural meeting of the Board of Governors, on 8 October 2012. ‘All of the documentation had to be circulated to the board 15 days in advance of the meeting and, as I had only just started in July, that gave us a very short window to create and finalise them,’ said Zinoecker. One of the first orders of business was putting the structure in place. Along with Regling, the first external audit firm and the five members of the Board of Auditors were appointed that day.

Board of Auditors members serve non-renewable three-year terms in an independent capacity. The terms of the first appointees were staggered between three and four years, so that the entire Board of Auditors wouldn’t have to be replaced at the same time. Of the five members, two are nominated by the chairperson of the Board of Governors, two by national audit institutions based on a system of rotation, and one by the European Court of Auditors. Holding meetings once a month, members of the Board of Auditors review the ESM financial statements, perform their own audits, and monitor the internal and external auditors.
From the outset, Regling deemed it imperative to equip the ESM with high standards of risk detection and mitigation. On 9 October 2012, less than 24 hours after the ESM’s inauguration, the Board of Directors met to finalise high-level principles for risk management, which, together with internal controls, are critical to the ESM’s credibility as an international financial institution.
Like many of its peers, the ESM operates with a three-lines-of- defence model that functions like a financial security perimeter, ensuring that credit, market, liquidity, and operational risks are tightly controlled.
The first line of defence covers the day-to-day management of risk, which is the responsibility of each department and business function. All staff are required to be aware of risks relating to their operations, identifying and reporting any issues up the hierarchy.
The second line of defence is provided by the risk and compliance department, headed by the chief risk officer. Independent of the daily flow of ESM business, this department tracks potential exposures to threats such as adverse movement of interest or exchange rates, the failed settlement of a securities transaction, the inability to raise funds on time, or the holding of securities that cannot be sold or offset due to low market liquidity. It continuously monitors the full implementation of the investment, funding and other guidelines adopted by the shareholders. It makes mitigation proposals, stays up to date on risk management methodologies, and provides early warnings to the managing director and Board of Directors. Perhaps its most important task, however, is to foster a risk awareness culture throughout the organisation, ensuring policies are implemented and risks appropriately managed.
‘The risk management team implements and maintains a state-of- the-art risk framework, supporting the ESM’s long-term financial stability,’ said Katerina Arvaniti, the ESM’s deputy head of risk. ‘By defining risk appetite and limits, we help the ESM fulfil its mandate to safeguard financial stability in the euro area. The team’s evaluations ensure that the institution avoids unnecessary risks and allays those inherent to its mandate, instilling confidence in its shareholders and its investors.’
An independent internal audit function provides the third line of defence. The head of internal audit reports to the managing director, ensuring risk management controls are operating properly and efficiently.
Not all risks can be measured in euros and cents. Political events that are beyond the ESM’s control, for example, could upset the financial markets and make it harder to raise funds. But the three-tiered structure for risk management sets out clear lines of authority and responsibility.
A risk statement set by the Board of Directors lays out the level of risk considered acceptable, and is reviewed annually. In addition, the ESM has an internal risk committee that ensures risk policies are implemented. Periodically, it conducts a risk self-assessment, which is reported to the managing director.
The managing director is responsible for the implementation and functioning of the risk management framework, for ensuring adequate risk reporting to the Board of Directors, and for further developing the risk policy. The chief risk officer and the internal auditor both report directly to the managing director as well as to, respectively, the Board Risk Committee and the Board of Auditors, to ensure their independence.
‘No other international financial institution has managed to achieve such a mature risk management framework, including the internal control framework, within such short timelines,’ said Yana Djoneva, the ESM’s deputy head of corporate governance and internal policies.
ESM staff are made aware of the firewall’s approach to risk as soon as they start work. This includes face-to-face training with a compliance officer, who provides a briefing on the code of conduct. All staff members must file an annual declaration certifying their compliance with the code of conduct. Beyond that, those classed as ‘designated senior officer’ must disclose their financial and business interests to the compliance officer.
Employees take part in regular risk and compliance training exercises, with many training modules online and completion rates monitored. Interactive sessions with visiting risk management experts reinforce active risk awareness, and enhance knowledge. Compliance certifications are renewed annually. 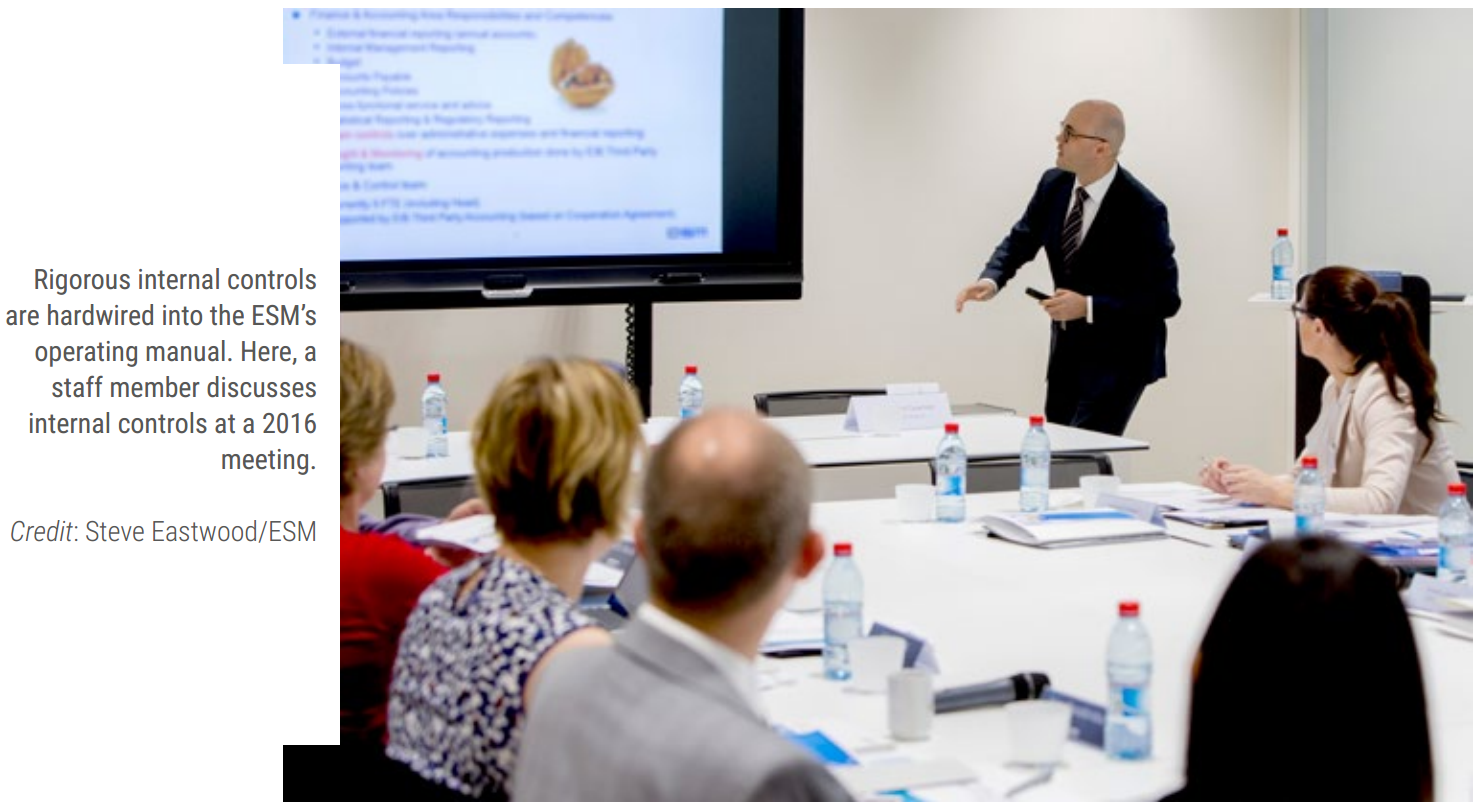 Recognising that corporate culture filters down from the person in charge, Regling has voluntarily published his declaration of financial interests. The ESM’s compliance officer, Eva Kinczer, said Regling also uses weekly all-staff meetings to ‘reiterate the utmost importance of ethical and professional behaviour as well as the need to act with integrity and in full compliance with policies and procedures.’
The ESM has made a concerted effort to apply environmental, social, and governance best practices to all of its internal operations, and it continues to improve them on an ongoing basis. These efforts can range from investing in so-called green bonds to encouraging its staff to recycle and use public transportation. The ESM works to ensure it conducts its activities with the highest standards of integrity and to maintain a comprehensive and transparent governance system. The ESM also has earned a SuperDrecksKëscht certificate from the Luxembourg government on waste avoidance and proper separation of recyclables.
The ESM started investing in sustainable, or ‘green’, assets as early as 2014, with an exposure of €300 million on average. As a result, it has been able to diversify its portfolio while supporting the development of sustainable investments. More broadly, the ESM’s investment strategy is inherently socially responsible because it mainly invests in bonds issued by public entities. In 2017, for instance, excluding the cash held in central banks, the ESM allocated more than 60% of its invested capital to sovereigns, government agencies, and supranational entities, with the remainder invested in covered bonds. Going forward, the ESM will be looking at further steps to enhance its role as a responsible investor.

Investment strategy continues in Chapter 35 and in ‘Focus — An unusual money market transaction’ in Chapter 37.
In 2017, Transparency International, the Berlin-based global anti-corruption watchdog, reviewed the rescue fund’s practices as part of a larger examination of decision-making by euro area institutions. The report said that the ESM ‘boasts world class audit arrangements, a code of conduct that ensures a high level of integrity, and a dedicated whistleblowing procedure that reflects best practice’[1].

[1] Transparency International EU (2017), From crisis to stability: how to make the European Stability Mechanism transparent and accountable. http://transparency.eu/wp-content/uploads/2017/03/ESM_Report_DIGITAL-version.pdf