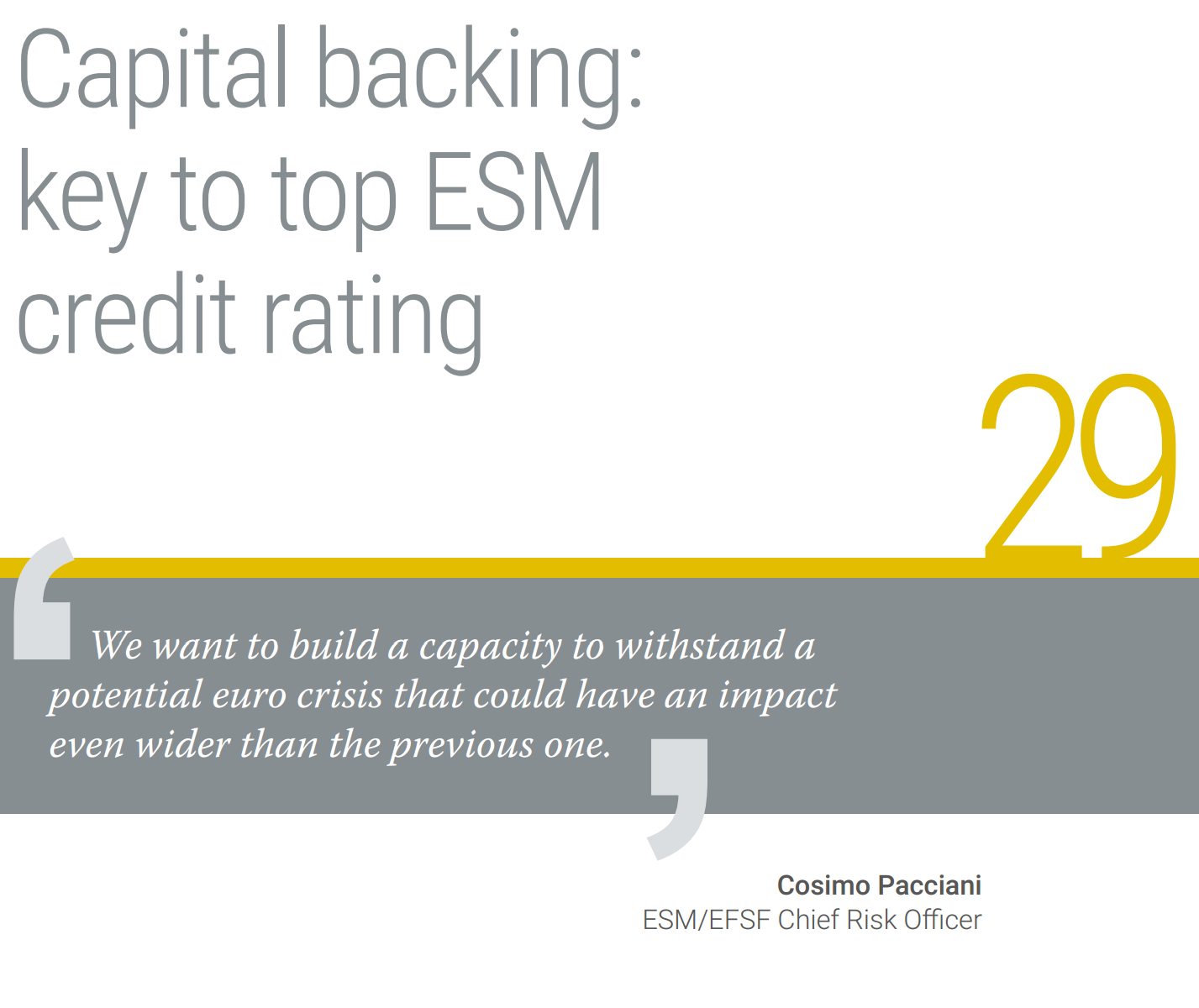 When the ESM was launched in October 2012, it was important to secure the highest possible credit ratings, as the EFSF had done for its debut in 2010. The ESM would be starting anew, and AAA certification would tell investors that the issuer is a low-risk investment, enabling the ESM to borrow at the best market rates.
The ESM’s closest peers are other supranational institutions that sell marketable debt, such as the EIB. Most of those existing institutions have stable operations and a familiar mandate, so they are able to renew their ratings with little fuss. In contrast, the ESM was an untested entity created at a time of extreme market nervousness. And its remit was to help countries that markets didn’t want to lend to.
Thanks to the ESM’s paid-in capital structure, Managing Director Regling was confident that the new firewall was on a surer footing than its temporary predecessor – but there could be no certainty. The ESM received its first paid-in capital instalments just after its official debut.
‘Rating agencies are very cautious,’ said Matjaž Sušec, the ESM’s deputy head of strategy and institutional relations. ‘The mandate of the ESM is that of a crisis resolution mechanism and therefore the rating agencies always approached it more conservatively than other issuers.’
Earning market confidence has always been a priority. From the start, Regling had an internal analytical team tasked with working closely with the rating agencies and making sure they were using the best information. Both the EFSF and the ESM would need to continue to be regular players in the fixed-income markets.
In the very beginning, the raters were still judging the ESM based on the outlook for its Members, just as they had assessed the EFSF. But that soon changed. ‘We insisted on having the rating agencies fully value the strength of the ESM,’ Sušec said. ‘The rating agencies started appreciating the ESM’s robust financial structure only gradually as the contagion risk in the euro area abated. This was also a sign of the credibility of the ESM as an institution.’
The ESM, like the EFSF, started out with the highest possible ratings – AAA from Fitch and Aaa from Moody’s – and the levels for both rescue funds have not fallen significantly over time.
The ESM has seen just one rating change and a handful of other rating events. The most momentous was in November 2012, when Moody’s downgraded France and it also downgraded both the ESM and the EFSF. The firewall rating has since become less dependent on French circumstances.
In addition, Moody’s, which had assigned the ESM a negative outlook at the outset, changed the outlook to stable in 2014 and to positive in May 2018.
‘This was a very good development because it showed that Member support is not the only factor that matters for the ESM’s rating,’ Sušec continued. ‘It also showed that the ESM was an established issuer, and that was very important.’
The next ESM rating event took place at the end of 2014, when, for three months, Fitch changed the rescue fund’s outlook to negative before returning it to stable.
The ESM has been rated AAA by Fitch and Aa1 by Moody’s since late 2012. The EFSF has been rated AA by Fitch since December 2014; AA by Standard & Poor’s since November 2013; and Aa1 by Moody’s since November 2012. Both funds also have an unsolicited AAA rating from the firm DBRS, which the ECB also recognises as a trusted source of evaluations and which began rating the ESM in 2014.

How do you solve a problem like a downgrade?

When Moody’s downgraded France and the ESM in late 2012, it also moved the EFSF to Aa1 from Aaa, which upended the EFSF’s immediate borrowing plans to issue a bond[1]. The downgrade to one of its biggest Members meant the EFSF no longer had the quality of guarantees needed to back its planned bond issue.
Since the rescue fund’s liquidity needs couldn’t wait, the team came up with a novel twist to solve the problem. Ruhl, the ESM’s head of funding and investor relations, and Fouqueray-Carrick, investor relations expert, tell the story:
Ruhl: ‘When France was downgraded, we were in the market with a transaction. We couldn’t open the books, in the end, as we did not have enough guarantors with a similar rating to the EFSF rating, because of that French downgrade. We had to stop the transaction and find a solution. The short-term ratings, for paper of less than 365 days, weren’t affected by the downgrade. So we thought about this for two or three days and then decided to do something very unique: a 364-day bond.’
Because the issue would have a maturity of less than one year, its rating would fall under short-term metrics and steer clear of long-term comparisons. As France’s downgrade did not affect its short-term borrower rating, the EFSF did not face the same guarantor shortage. There was just one more hurdle: persuading the bankers to give it a shot.
Ruhl: ‘The bankers said: “This will never fly.” It was a lot of work, especially for me, to talk to them many times over the weekend. Saturday and Sunday, I spent most of my time on the phone trying to convince them.’
Fouqueray-Carrick: ‘I remember we spoke to the banks and they confirmed they’d discussed the plan. But in the background I could hear reluctance. They were saying: “We really don’t think this is a good idea.” But Siegfried insisted: “No, this is a thing we need to do, and we’ll get it done.” They were still unpersuaded: “We’re really not sure about this,” but Siegfried remained undeterred: “We are going to do it.”’
Ruhl: ‘I was super convinced. Based on my view of the market, of what investors want to see and where I thought demand would be – there were a lot of details you put together like a puzzle, like a mosaic. You think, will it work or not? My impression was: it will work. In the end, it’s a gut feeling.’
Ruhl: ‘Finally, Monday morning the bankers were persuaded and we opened the books for a 364-day bond[2]. It was a very successful trade with a final size of €7 billion. Looking back at the situation with France’s downgrade and the 1-year, €7 billion transaction, of course it was difficult to challenge the experienced bankers. You offer them a trade where they can make money and they tell you: “We don’t believe in that.” It’s not easy to withstand. But on the other hand, it’s quite simple because there are only two options: we do it or we don’t. If we do it the risk is that we fail, and we don’t have the money. But if we don’t do it, we definitely don’t have the money.’
Fitch placed the ESM on a similar negative outlook in October 2014, again in connection with developments in France. But in this case the ESM’s analytical team worked closely with the rating agency to show how its methodology was overstating the risk, and two months later, in December, Fitch affirmed the ESM’s AAA rating and returned the outlook to stable. Since mid-2017, the ESM has been rated two notches higher than the EFSF, mainly because of the paid-in capital that gives it independence.
‘All Members, including all the programme countries, paid us capital, so we have it in hand. It doesn’t matter whether the countries that gave it to us are downgraded or not,’ Regling said. ‘We have the paid-in capital, and there’s also €620 billion in callable capital. Of course, for the callable capital, rating agencies take into account that some of those who would be called upon might not be able to provide the money in a crisis, but €80 billion is still a big buffer before one gets to that stage.’
One of Regling’s biggest jobs, therefore, is keeping up relations with credit-rating agencies as well as with the asset managers, the sovereign wealth funds, and the many other investors that entrust the ESM with their money.
‘That’s why I travel constantly, certainly to the big investors,’ the ESM chief said. ‘Some of them want to see me. At one point, a large investor I had never visited said, “We want to see the boss at some point,” so I thought, Okay. I get the message. If they want to see me, I’d better go.’