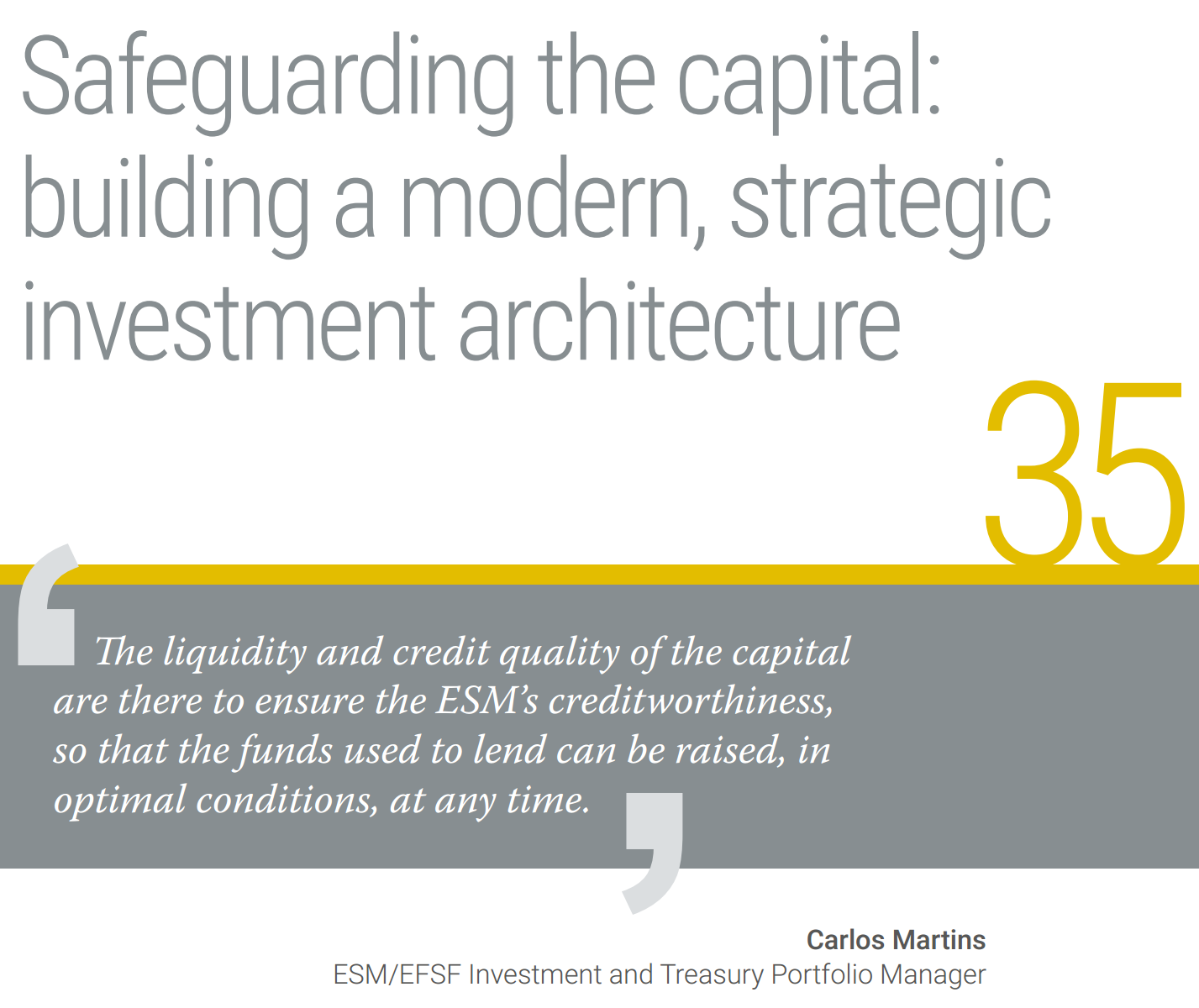 As its operations have grown, the ESM has turned to derivatives to help it manage financial risks. In 2017, for example, the ESM took further steps to expand its investor base, manage the interest rate risk on Greece’s ESM loans, and preserve its capital. Specifically, it conducted the short-term debt relief measures for Greece at the behest of euro area finance ministers, issued its first non-euro bond, and broadened its investment universe geographically.
All these actions could have exposed the rescue fund to detrimental shifts in interest rates or foreign exchange rates. But derivatives, which are financial instruments whose price fluctuates based on an underlying asset, can help protect against such risks. The ESM put in years of preparatory work by its legal, risk, technology, funding, investment, and asset liability management teams to set up a framework for derivatives, and then it expanded their use in 2017.
The ESM uses derivatives such as interest rate swaps, foreign exchange swaps and forwards, and cross-currency swaps. In particular, the ESM deploys interest rate swaps to reduce the risk that Greece would have to pay a higher interest rate on its loans should market rates rise. In addition, for the US dollar bond issuance, the ESM hedged its US dollar cash flows from bond issues back into euros – the currency in which its programme country loans are denominated.
‘Derivatives are an important tool for us to mitigate certain risks related to our activities,’ said ESM Funding Officer Klaus, a former derivatives trader. ‘We are not a bank. We are not here to speculate. The derivatives are not there to be structured in complex financial products. What we’re talking about are plain vanilla derivatives to mitigate risks.’
The ESM applies a prudent framework for its credit exposures to derivative counterparties, which include public sector entities and commercial banks with high credit ratings. For operations with commercial banks, all derivative- related exposures are fully collateralised in cash or highly rated securities, on a daily basis. For lower-rated bank counterparties, the ESM can contractually request additional collateral to reduce credit risks.
Olivier Pujal, currently senior advisor to the ESM secretary general and former deputy head of the asset liability and management (ALM) team, said that, by using derivatives, the ESM reduced interest rate risk for Greece on its ESM loans. ‘Through derivative instruments, we try to limit variability of the ESM cost of funding by locking that cost in as much as possible at current long-term rate levels,’ he said.
Questions that needed to be addressed included contract structure, collateral, and custodian arrangements. For the time being, the ESM has ruled out the use of central clearing facilities for derivatives transactions, as those facilities handle only certain kinds of trades.
The ESM keeps its investing and funding books separate, by barring some data sharing between the departments. The solution was to pull together all derivatives transactions under one International Swaps and Derivatives Association Master Agreement, while the investment and funding teams each have their own credit support annexes with the commercial banks that serve as counterparties. Having two credit support annexes separates the day-to-day collateral needs of each book, while the single Master Agreement guarantees that all positions are netted if a counterparty defaults, keeping the ESM’s overall credit risk exposure at a minimum. Negotiations started in late 2016, and in February 2017 the ESM signed up its first group of banks.
Within the rescue fund, in the context of the Greek measures, the ALM team developed the calculation tools to monitor the volumes, maturities, and pricing of the derivative transactions, while the funding team was responsible for the optimal execution on the market.
‘Thanks to these tools developed in-house, the traders know at all times what operations can be done, and they can search for the best price within those parameters, while ALM checks that everything is done properly,’ Pujal said.
Programme countries aren’t the only potential beneficiaries of these instruments. Foreign exchange and interest rate derivatives have also widened the ESM’s borrowing flexibility and provided more avenues for the investment of the paid-in capital.
Derivatives made it possible for the rescue fund to sell its first dollar bond on 24 October 2017. The 5-year bond raised $3 billion[2], and the ESM executed cross-currency swaps to lock in a set foreign exchange rate over the life of the transaction. Using derivatives, the ESM can swap all funds back into euros as soon as they are raised, as well as convert euros into US dollars at a pre-set rate so that the ESM can make the coupon and principal payments on the US dollar bonds.
Likewise, foreign exchange derivatives are employed for the purchase of securities outside the euro area. Swaps made their debut in 2015 when the ESM began investing in Japanese yen and Danish krone bonds. For portfolio diversification purposes, the rescue fund can now conduct operations in nine currencies. By 2018, the ESM had invested more than €7 billion across eight non-euro currencies.
‘Everything has to be swapped back into euros to avoid currency risk,’ said ESM Portfolio Manager Semerdjiev. In the beginning, the firewall could buy non-euro-denominated securities only with maturities of two years and shorter. In the interim, the ESM worked up a more comprehensive derivatives strategy and is now capable of all necessary cross-currency trades.
On the investment side, derivatives are included in a set of risk metrics employed to monitor the market risk of the ESM’s portfolios. In particular, they are fully integrated in the standard value-at-risk measures to ensure that the ESM’s overall investment risk remains within the limits defined by the ESM’s shareholders.