Klaus Regling in interview with Simerini 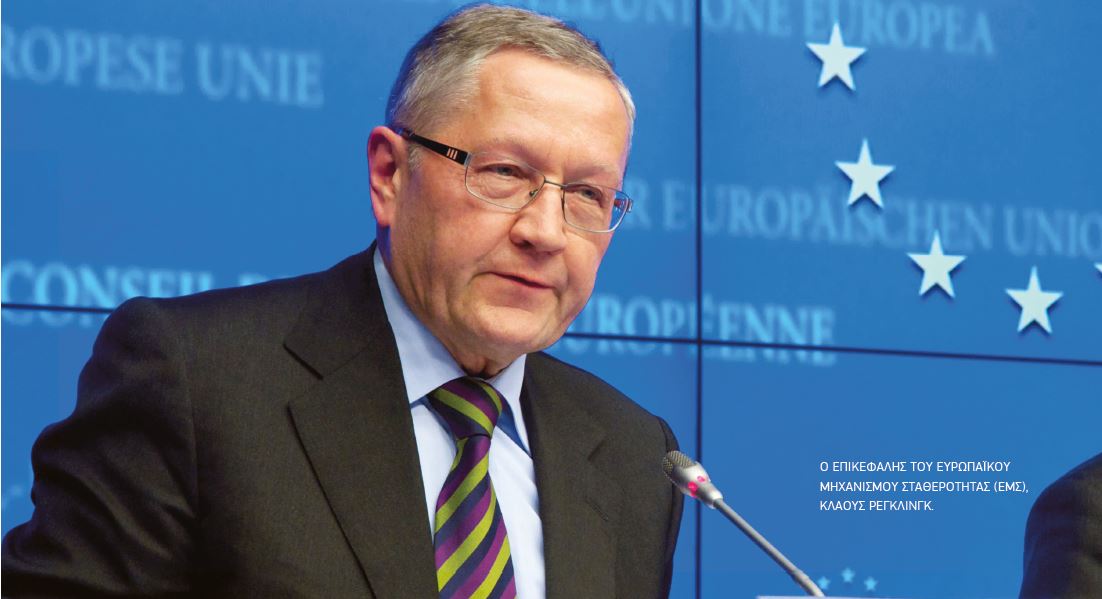 Are we close to the creation of the first European Finance Minister, as Mr Juncker said?

I believe that we should look at this in a wider framework.

It has been heard that you might take up the position.  Do you see yourself taking on that role?

I don’t think that is on the agenda. As I said, this will only happen at the end of the process, when there is more clarity about the many other elements about deepening Monetary Union. I do not believe that I would be a candidate. I am glad to be managing the European Stability Mechanism (ESM), and by the year’s end we will see if we can develop it further into a European Monetary Fund.

Let’s talk little about Mr Schaueble.  Recently, he said that the worst Eurogroup, during his term, was the night they met about Cyprus.  How would you evaluate the Cypriot economy today, four years after the crisis?

In March of 2013, Cyprus was in a difficult position and I am glad the euro area and the ESM were able to help. But of course most of the efforts had to come from the Cypriot population. They had to take the pain and the adjustments, which were unavoidable, given that ten years of developments in the wrong direction led to the crisis.

Now, we see that the approach taken in March 2013 is working, and bringing good results. Growth is good, this year probably more than 3.5%, unemployment is coming down, and in another two years will be below the level before the crisis. There is a lot of progress. Of course challenges still remain. The ESM is closely following the Cypriot economy, together with the other European institutions and the International Monetary Fund (IMF). We want to continue to help and we know that there are still problems in the banking sector, but otherwise the growth since 2013 is tremendous.

Is Cyprus, therefore, developing at a quick pace?

Cyprus is now in the fast lane. Of course it has to be careful because this never continues forever. So, it’s important to note what economic policy will be followed over the next few years. We know the elections are coming next year, but I am confident that Cyprus will continue to develop, because the country has seen positive results with its reforms which should continue now with more privatisation, more reforms in the public sector, legal system, and banking sector. I believe Cyprus has come a long way to sustain these positive developments and should make sure that it will continue to be in the fast lane.

In the case of the Italian banks though we saw things happening a little bit differently. The European Commission along with the ECB has approved and has accepted the application of European legislation and not the regulatory framework. This has allowed the rescue of the Italian banks to be done with state support rather than a ‘haircut’.

I think that’s not really a correct comparison, because in Italy we are dealing with a few banks, while in Cyprus it was the entire banking system, which in 2013 was far too big for the country, eight times the size of the economy. The amount of money that was needed to start the program in order to bring Cyprus back to positive growth was really high. As you know, the ESM, along with the IMF, provided a large sum of money. The IMF provided approximately a billion euros, and the ESM provided approximately 6.3 billion euros. So, in total that is approximately 100% of GDP.

Therefore, avoiding a bail-in of bank creditors could not have been possible, because it would have made debt sustainability impossible.  When you look at the Italian banks it is completely different; the amount of money needed was approximately 0.5% of the Italian GDP, a relatively small number.

There was also a bail-in of junior debt and shareholders of these banks were completely wiped out.

Also, do not forget that Italy is in a different position. Italy never lost market access, during the last few years or during the crisis. So, it is really not an appropriate comparison.

So, you are saying that it is not an issue of equal treatment, but rather of different circumstances?

Let’s move on to the issue of "bad banks".  Would it be a good idea for Cyprus, is that still an option?

I think looking into the possibility of a bad bank makes sense, because as I said Cyprus has made a lot of progress, but banks continue to have a problem, as does the system as a whole. Individual banks differ a lot, bank by bank, and we need some solutions. The bad bank option might be part of that solution. The European Commission together with the European Banking Association is looking into how national bad banks could work effectively and efficiently. But, a bad bank on its own will not solve the problem. It can only be one part of the solution. Also, it is important that banks do the necessary recapitalisation upfront. The government needs to create a legal framework for the disposal of non-performing loans (NPLs). There has to be a secondary market. All this needs to happen at the same time, otherwise it will not be solved. A bad bank on its own is not a silver bullet.

Could we perhaps see the creation of a European "bad bank" in the future?

That is difficult to foresee now because the situation differs a lot country by country. We have many countries in the euro area that do not have any NPL problems, or where the level of NPLs is very low, and there are other countries, where the level is high. In Cyprus, it is particularly high, as well as in some other countries. So, it is much more urgent here than in most other member states.

We know you were one of the terror-letter receivers, from Greece…

I am aware that one of these letter bombs was also addressed to me, as to several other people in Europe. It was intercepted at the airport in Athens, so nothing happened. I am very happy that now the suspect was found. When I met the former Prime Minister, Papademos, who is a very good friend from the days he was Governor of the Greek Central Bank and Vice President of the ECB, I was very happy to learn that he will fully recover, but it was a very serious attack. By the way, there was another incident at the IMF office in Paris where a secretary got burned because she opened one of these letters. So, it is very good that the Greek authorities have now been able to hopefully close this chapter.

Have you ever felt that your life is under threat because of the job you did before?