Speech by Klaus Regling at ESM Seminar with Andrea Enria

Welcome, Andrea, to the ESM, also on my behalf. Thank you for your views.

You have made some interesting points on NPLs and on a European bad bank that I will return to. The stability of banks and the stability of the euro area economy are highly correlated topics.
Your institution deals with the first, mine with the second. But at the ESM, we also spend time thinking about European banks, in relation to our stability mission.

In that light, I’d like to say a few words on financial integration. More cross-border banking and financial market activities would increase the stability of the EU economy. This is because more financial integration would mean more economic risk sharing. Europe has made tremendous progress since the crisis. But the one area where the EU – and the euro area – are still lagging behind the US is economic risk sharing. 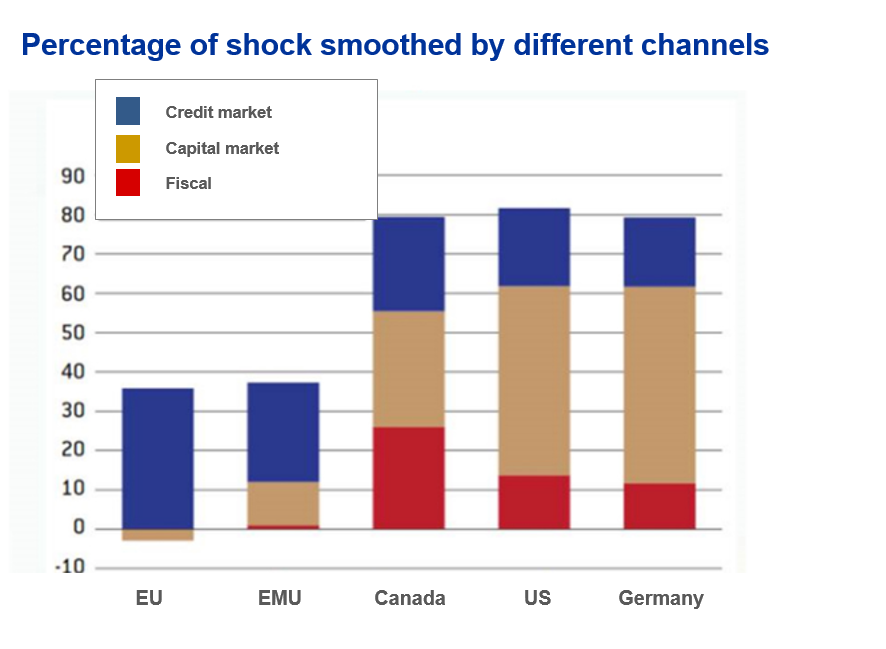 Risk sharing is the sum of mechanisms through which a shock to one country’s economy is shared by others. It helps smooth business cycles and makes national economies more resilient.
In the U.S., shocks are evened out to a much greater degree than in the EU and in the euro area.
Even inside large countries such as Germany and France, it is more developed than across the euro area. We need to address this lag, because more risk sharing would make EMU more robust, and its economy more resilient.

Now let’s look at how financial integration has been doing since the start of the single currency. This ECB chart shows that monetary union clearly promoted financial integration during the first 10 years of its existence. But fragmentation dramatically returned during the crisis. More recently, financial integration has resumed, though it still remains well below its peaks. Cross-border banking remains the exception rather than the rule, and banks and their clients have a much stronger home bias today than before the crisis. As I said, this hinders economic risk sharing, and therefore makes the euro area economy less resilient.

Andrea, as you have shown with a lot of data, low profitability and legacy issues are an important explanation of why cross-border banking has suffered. Therefore, banks need to aggressively reduce NPLs, which are keeping down profitability, particularly in some countries.

That is why I welcome your idea for an Asset Management Company as a valuable policy proposal. Your plan for a European bad bank does not foresee mutualisation of risk, which politically is an advantage. You identify steps to help establish a market solution. As you said, there are many issues that need to be sorted out: corporate governance, funding and the role of governments. The AMC will have to issue billions of euros of debt. That is no simple task – I speak from experience, because it is what we do at the ESM. Some role for the public sector is probably needed.

Another complication will be the sheer complexity and size of the newly established entity.
The target is to move €200/250 billion of NPLs to the AMC. This means you would have to transfer millions of loans. In Greece alone, there are more than half a million corporate and SME NPLs.

One lesson we learnt from working with programme countries is that a bad bank should also function as a “work-out bank” which resolves the over-indebtedness of borrowers. It should not just be a vehicle to clean up the balance sheets of banks, so as not to simply shift the problem between the public and private sector. If the problem of over-indebtedness is not dealt with, it will come back to haunt us later.

In summary, your proposal is very valuable. But we should lose no time tackling the important issue of NPLs. That is why I suggest other measures be taken in parallel while we work through the complexities of an AMC. The ECB has already started a programme assigning targets to banks to reduce NPLs. And your ideas for a platform with high quality and consistent data or an EU servicing regime to facilitate securitisation would be major steps forward that could be relatively straightforward to implement.

A comprehensive solution to addressing the issue of NPLs would be beneficial for the euro area economy because it would help banks to provide more credit. And, equally important, it would help financial integration.

To that end, we should also work to complete Banking Union. Two pillars have already been set up: the Single Supervisory Mechanism in Frankfurt and the Single Resolution Board in Brussels, which can wind down failing banks. We still need to create a financial backstop for the Single Resolution Fund, and set up European Deposit Insurance. This second issue is controversial, but in the longer run -- after de-risking and after legacy issues have been sorted out – a European Deposit Insurance would reduce the vulnerability of EMU, and strengthen financial integration.

Much work also remains to be done on Capital Markets Union which is high on the agenda of the European Commission. CMU would also strengthen financial integration, risk-sharing and thus resilience of EMU.

Now I don’t want to sound as if the EMU still needs a lot of work. That is far from the truth.
Europe has made tremendous progress since the crisis. Mostly because national governments did their homework, so that fiscal and current account imbalances have disappeared to a large extent, and competitiveness has been restored. We have also tightened economic coordination and monitoring procedures across Europe. I already mentioned progress in Banking Union since the crisis. And last but not least, my own institution, the ESM, is a crucial element of Europe’s response to the crisis.

In conclusion, I believe that Europe has come out of the crisis much stronger than before. Of course, there are challenges and our two institutions, EBA and ESM, have enough work to do.
Andrea, you talked about some of these challenges in your introduction.

Perhaps you would now like to react to my thoughts.