Traditionally, public sector institutions are seen as bureaucratic and slow-movers. On the contrary, the ESM was built to be an agile and lean institution. As a crisis resolution mechanism, we need to be flexible in difficult situations. So, while following best practices in terms of processes and fully complying with rules, we had to make sure that we were lean and modern so we could fulfil our mandate.

Technology became part of our DNA.

Technology driven from the start

The ESM was one of the first International Financial Institutions (IFI) to develop a cloud-based strategy, before it became the trend, and one of the first user of SAAS (Software as a Service) solutions offered by financial service providers and technology firms. If we were to build networks, recruit engineers and rent large data centres, it would have taken us years. Fintech allowed us to move fast.

And we remain ready to embrace digital transformation and to lead market innovation. There is no doubt that Artificial Intelligence, extensive data analysis, advanced analytics and robotics will strongly change the future of finance.

Innovation at the heart of the institution

That is why the ESM created a volunteer group of staff, so-called ESM 4.0, where staff is engaged in looking for innovative solutions. They do this in their free time and generate great new solutions. For example, two engaged staff members have developed a robotics solution for novation of contracts in the back office, to gain time and avoid errors.

We also want to leverage new technology to navigate capital markets. A well-functioning and liquid bond market is extremely important for our investors and therefore for us, so the ESM has developed a market intelligence application to analyse the trades on the bond market.

Let me put this in context. The ESM is one of the biggest euro issuers with €300 billion in outstanding bonds in the market, an issuance volume of €30 - €40 billion per year, more than 1600 investors and 41 banks placing our bonds. It is also an important player on the buy side through the investment of its €80.5 billion paid-in capital, mainly in highly rated fixed-income products.

Thanks to this significant presence in the market, our in-house big data analysis tool is able to analyse the behaviour of the different types of investors. The application starts with data from the primary market and also comprises data on trades in the secondary market. We have more than 2 million data items and this number is growing.

Let me give you three key insights: 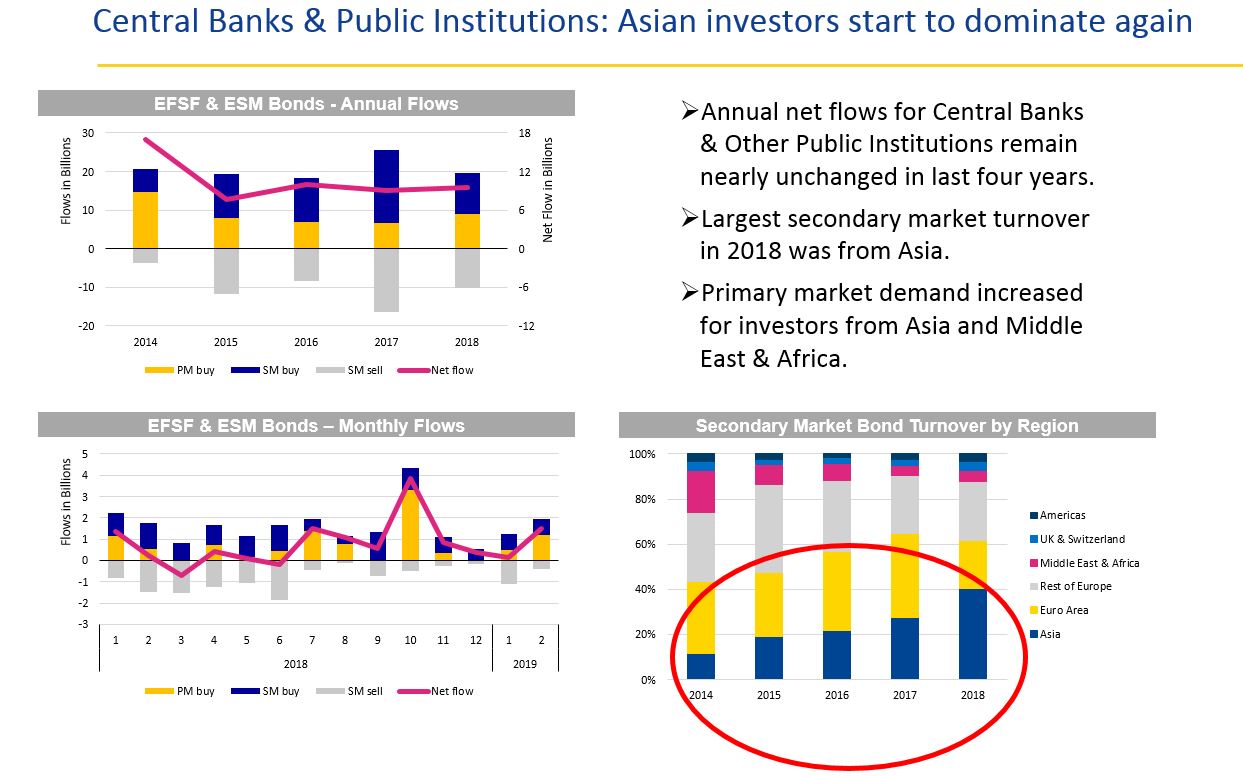 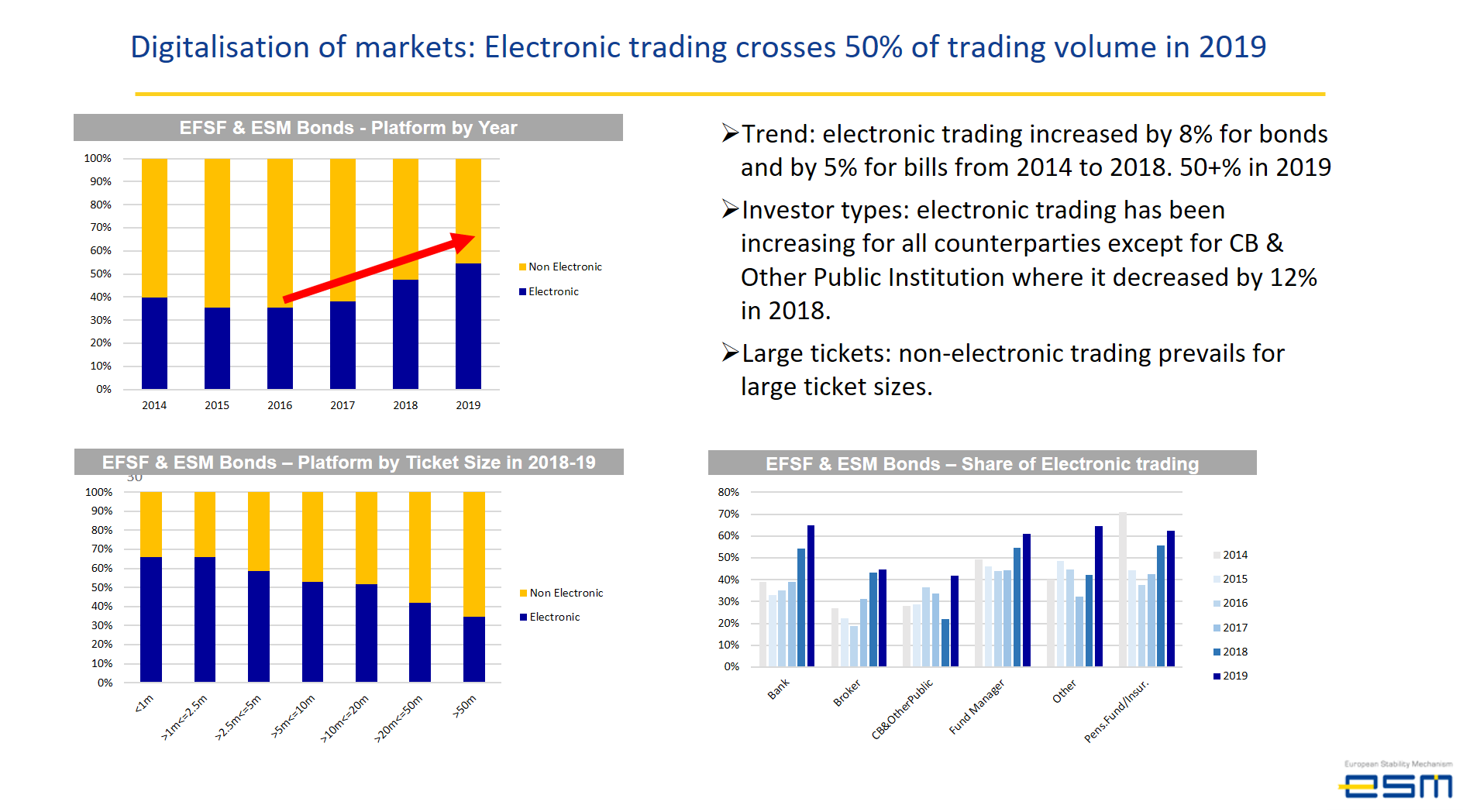 Shaping markets for the next generations

The last thing I would like to talk to you about is the European debt issuance platform initiative led by the ECB. The central bank started a public consultation that runs until 9 July.

About two years ago, we started to argue that Europe needed a more integrated solution for debt issuances. This would be an important contribution to the EU’s capital markets union. And it would strengthen the role and geopolitical independence of the euro in the international financial system.

The book-building process remains rather inefficient. Europe uses more than 28 central securities depositories against only two in the US and the most relevant Sovereigns, Supranational and Agencies (SSAs) in Europe rely on different depositary and settlement systems. This translates into multilateral commercial links, often adding banking agents in-between.

The book-building process remains rather inefficient. Europe uses more than 28 central securities depositories against only two in the US and the most relevant Sovereigns, Supranational and Agencies (SSAs) in Europe rely on different depositary and settlement systems. This translates into multilateral commercial links, often adding banking agents in-between.

The EDDI (European Distribution of Debt Instruments) initiative led by the ECB and supported by the ESM precisely aims to enhance the bond primary market and bring it to the new reality of the 21st century.

The objective is to create an efficient “one-stop” issuance platform for issuers such as the ESM, EFSF and other SSAs and European public financial institutions. It would be a single and synchronised system, from the front to the back end, which would make the issuance process for issuers, banks and investors much more efficient.

It would modernise the pre-trade part of debt distribution, from deal preparation, announcement, book-building, to pricing and final term sheet, leading to the harmonisation of market infrastructures in Europe for bonds denominated in euros.

That would start with the announcement of the bond deal and would continue up to the settlement of the entire transaction in central bank money. With this, European bond markets would rely on a very stable chain of processes for the entire issuance process.

However, EDDI is not mandatory but modular and can be used either in part (pre-trade or post-trade components) or in its entirety, and market participants will still have the possibility to rely on old processes if they wish.

With this new service, Europe would get a deeper and more liquid market which, in turn, would increase market stability. It would also mitigate risks on European debt capital markets (less dependence on the private sector) and create a level playing field for market participants (same treatment for all investors whatever their location).

This would also lead to greater resilience, which is a big advantage in times of crisis or when political tensions affect markets, something I’m sure we all see the advantage of.

I believe it is an evolution that we should not be afraid of. What I wanted to show you today is that a public sector institution like the ESM doesn’t need to be behind the curve, but can lead in certain aspects, and that the public sector can benefit immensely from technology. Not only for our own purposes, but ultimately for the euro area citizens for whose benefit we work. 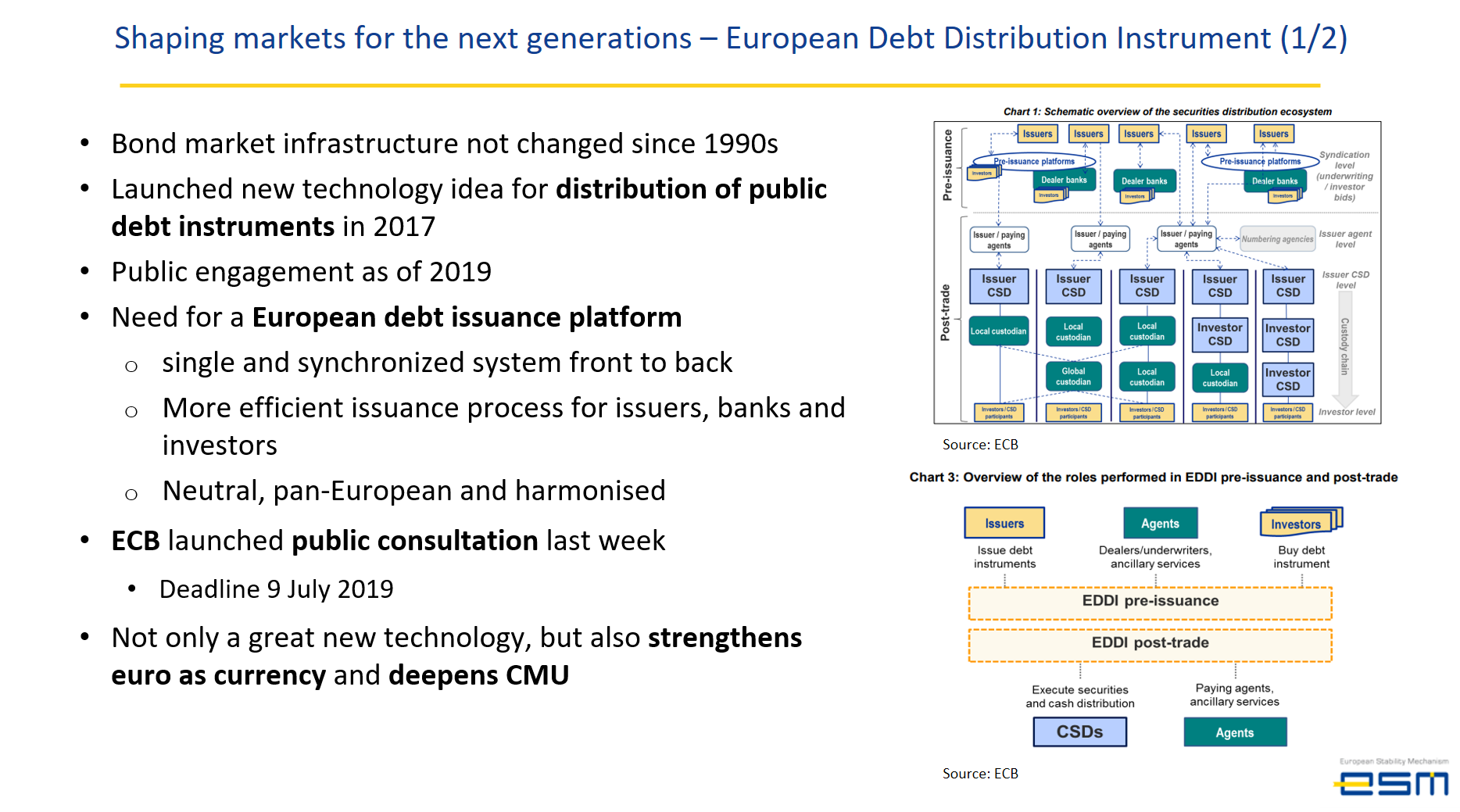 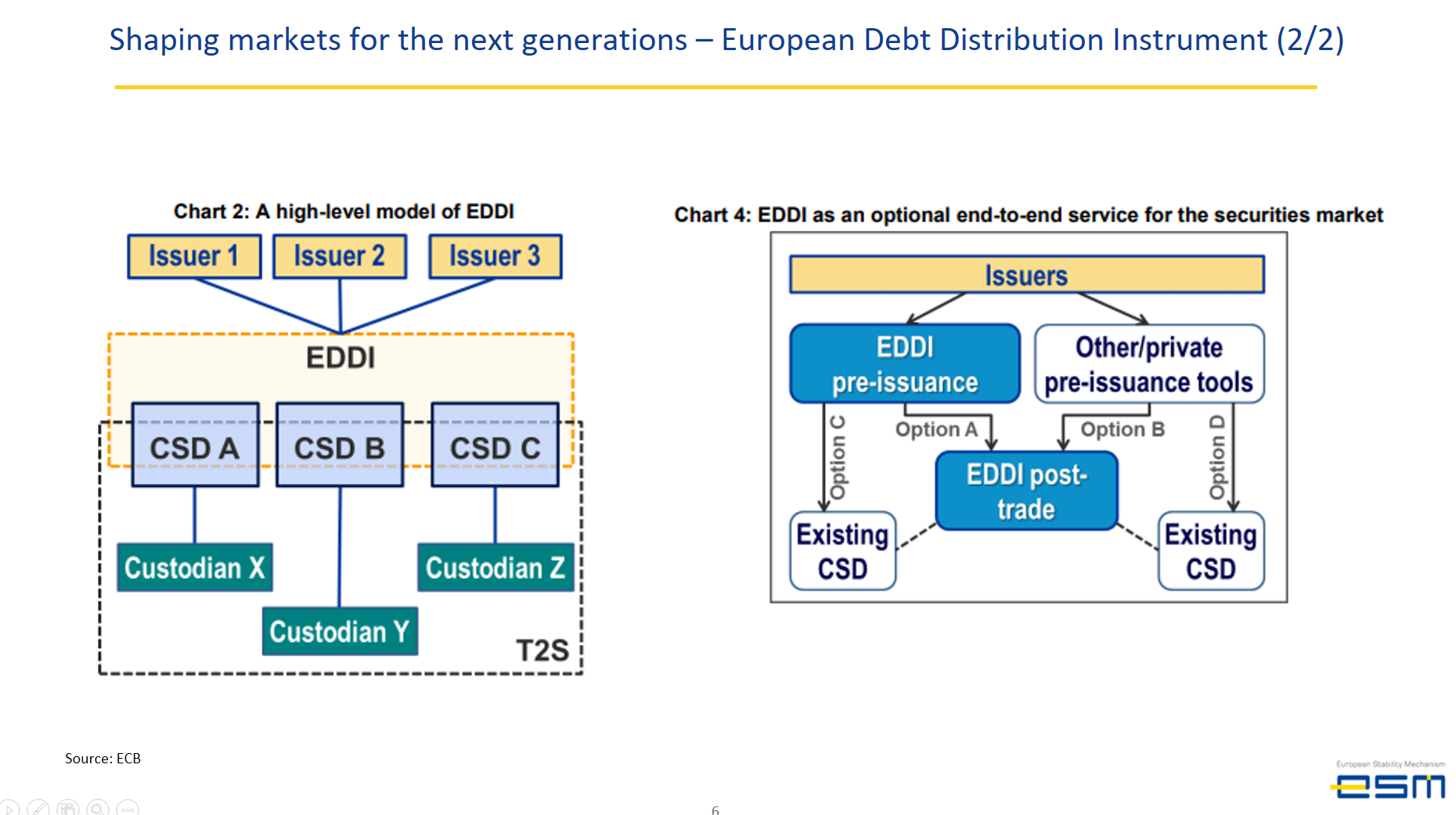 European Central Bank, "Market consultation on a potential Eurosystem initiative regarding a European mechanism for the issuance and initial distribution of debt securities in the European Union"  https://www.ecb.europa.eu/paym/pdf/consultations/market_consultation_on_european_distribution_of_debt_securities.en.pdf