“The increasing stability of the euro area”

If I would have stood here one year ago, and told you that the euro area is a more stable, secure and reliable place to invest in than the UK and US, you would not have believed me. Yet, with what we have learnt in the past year, I think I may convince you.

While the UK and US recently made a turn towards more protectionist and populist policies, this year’s European elections brought victories for candidates who are pro-European, pro-trade and pro-cross-border collaboration.

Ladies and Gentlemen, it is an honour to speak to you at this conference. And as I am the last speaker before the Gala dinner, I want to start getting you in a good mood. And I will do this by telling you a positive story about Europe.

Let me start with my own institution, which is based here in the heart of Europe, in Luxembourg.

The ESM provides financial assistance to euro zone countries that have lost market access. It was set up at the height of the euro crisis. Without the ESM, countries such as Greece would have defaulted, and the euro would have broken up.

The ESM has disbursed a total of €265 billion in assistance loans to five countries. Four of those have ended their programmes: Ireland, Spain, Portugal and Cyprus. They are success stories: Ireland and Spain have the highest growth rates in Europe. And all these countries are reform champions. They have made more progress in modernizing their economies than others. This is because of the strict conditions that come with our programmes.

This week’s news shows that Greece is making positive progress as well. As long as the country implements the reforms it has agreed to, it can return to the bond market before the end of the programme in 2018. This is good news. It takes away uncertainty for markets. And it shows that Europe’s approach of providing solidarity to countries in financial need is working.

And this is not the only good news. In December 2016, I wrote an op-ed for the World Economic Forum with the title “What to watch in Europe in 2017”. I argued that the big elections in Europe would be key drivers for the markets this year. This is important for the ESM, as we plan to issue €57 billion in bonds, which makes us the largest issuer of euro-denominated debt in our peer group.
We all remember the outcome of these elections. While the UK and US opted for more protectionism and populism, Europe has so far been in favour of pro-European candidates. In Austria, the presidential election was a victory for the pro-European candidate from the greens. The Dutch elections were won by the pro-European, pro-trade liberal party. A pro-European party also came out on top in the Bulgarian elections. And finally, Emmanuel Macron won the first round of the French elections. We need to see how the final round goes on Sunday, but it looks positive for Europe.

Was this predictable? Well – maybe a bit.

In my article, I argued that three elections would matter most: The Dutch, the French and the German elections. These three countries represent 56 percent of the euro zone economy. They are three of the six founding members of the European Union. Together with Belgium, Italy and Luxembourg, they signed the Treaty of Rome exactly 60 years ago this year.

In my article, I showed three charts to make clear why those three countries have less reasons to follow the populist path chosen by the UK and US. I want to show you these charts today.
First of all over the last 60 years, the Netherlands, France and Germany outperformed the US and UK in real GDP per capita growth. It shows that cross-border collaboration made these countries and their citizens rich and wealthy - very rich and wealthy. 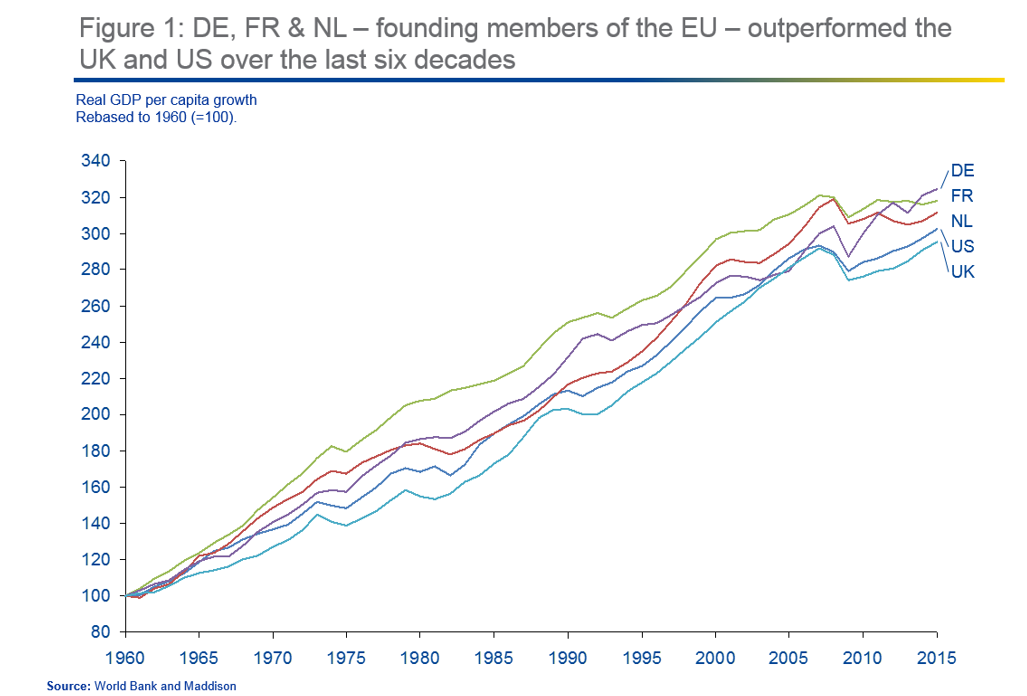 But that is not the only point. These three countries also do a much better job in distributing wealth. This ensured that large parts of society benefit from this economic growth. 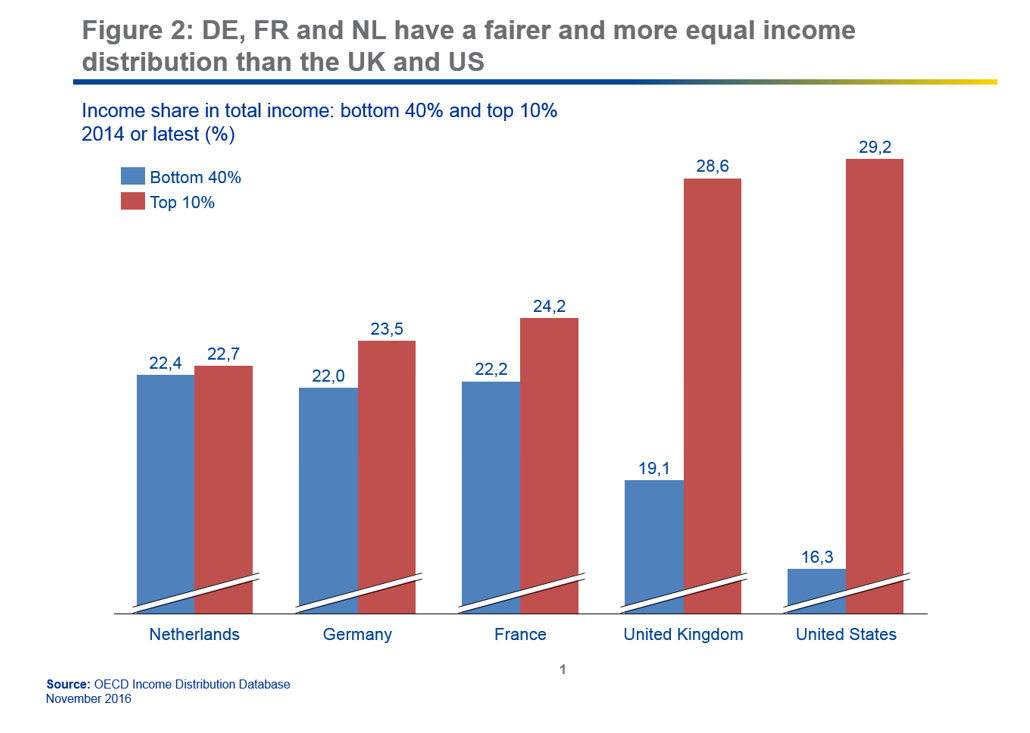 The results are striking. In the U.S., the poorest 40 percent of earners bring home just 16 percent the national income, while the richest 10 percent earn a full 29 percent. In the Netherlands, France and Germany – this year’s three election countries – the numbers are much smoother. The UK is somewhere in the middle, but the trend is similar to that in the U.S.

From fairer tax schemes to affordable first-class education and social security, the European social model has many strong points to counter concerns of the population.

Rising income inequality is by now widely recognized as an important factor behind the surge in populism, or protectionism, or nationalism or whatever you want to call it. In my opinion, it is no coincidence that this movement has been more successful in the US and UK than continental Europe. I believe there is a direct connection with the numbers I just showed you, and the outcome of these elections. This makes me confident about political risk for the remainder of the year. I believe Europe wants to hold together.

Europe’s success is also reflected in economic data. With the exception of Greece, all European countries have returned to growth after the crisis. The European Union and the euro area grew slightly faster than the U.S. last year. 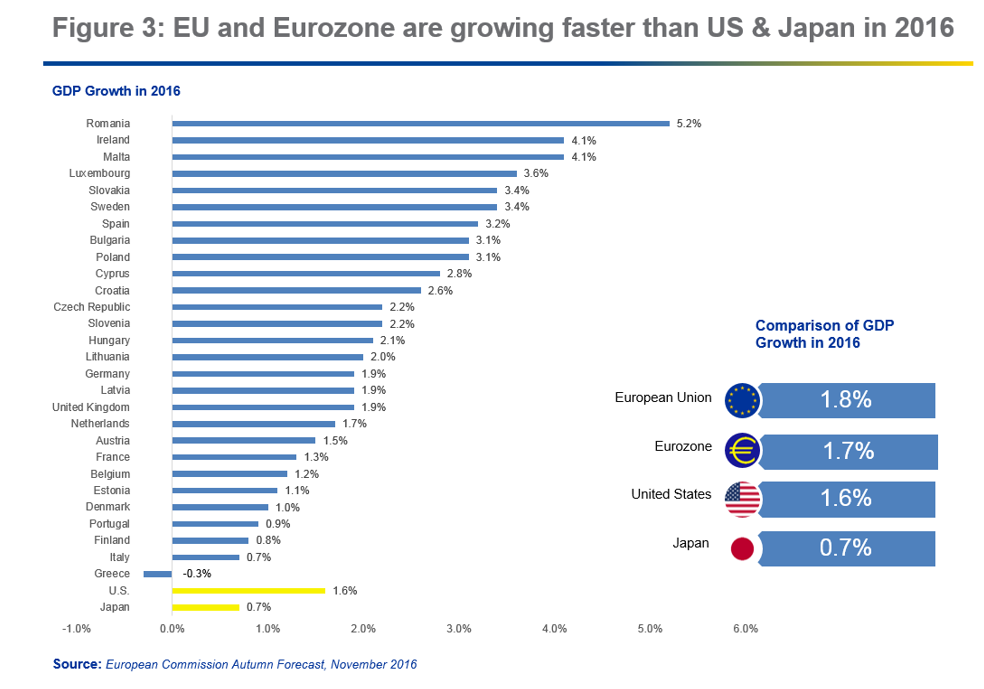 Few would have believed it only a few months ago, but Europe is emerging as a region that offers a stable haven, just as the fate of other economies is harder to predict. The UK is facing complex divorce negotiations with the EU. There are significant economic downsides from Brexit for the UK. The damage to the EU economy is probably limited, and the impact might well be positive. Especially if companies and financial institutions decide to move to the continent.

A hundred days into the new administration, it is equally clear that predicting the economic future of the United States is becoming more difficult. On the contrary, the recent elections have shown that the headline risk is waning in the EU and euro area. Even some of the most sceptical commentators have started recognizing this.

This is important for us. At the ESM, we see it reflected in very healthy appetite for our bonds and bills. The market is open, and our funding efforts so far this year have been going very well. We have an ambitious funding programme of €57 billion this year. This was higher than in previous years, also because we needed to fund the cost of some of the short-term debt measures for Greece. Markets got a bit scared around the Dutch and French elections, and we noticed that investors were somewhat more hesitant at times.

But since the good news from the elections, the market now has a much sunnier view on things. And overall this year, our funding operations have been going very well indeed. As planned, we raised €16 billion in the first quarter, a relatively high amount for us. Then on April 25 we completed the full Q2 funding requirements for the EFSF, the temporary predecessor to the ESM. It was the week after the first round of the French election, and the market was very good for European names. We printed €8 billion in total in a dual-tranche transaction, with a total order book in excess of €20 billion. This was a huge success. It allowed us to raise the full €13 billion that it needed for the second quarter as early as April. This is more than two months before the end of quarter.
The deal was a great not just for our institution – but more importantly also for euro area sentiment.

Our investors are spread all over the world and they recognize that Europe is a stable and attractive place to invest.

Stability is crucial for foreign investors.

Ladies and gentlemen. I promised to send you off to dinner with some positive messages. While uncertainty and unpredictability increases in other parts of the world, they are decreasing in the euro area. The election outcomes, the progress in the Greek negotiations and positive market sentiment all contribute to this. The Euro Area is emerging as an area of stability, security and reliability.
In today’s volatile world, that is worth a whole lot.

Thank you very much for your attention.