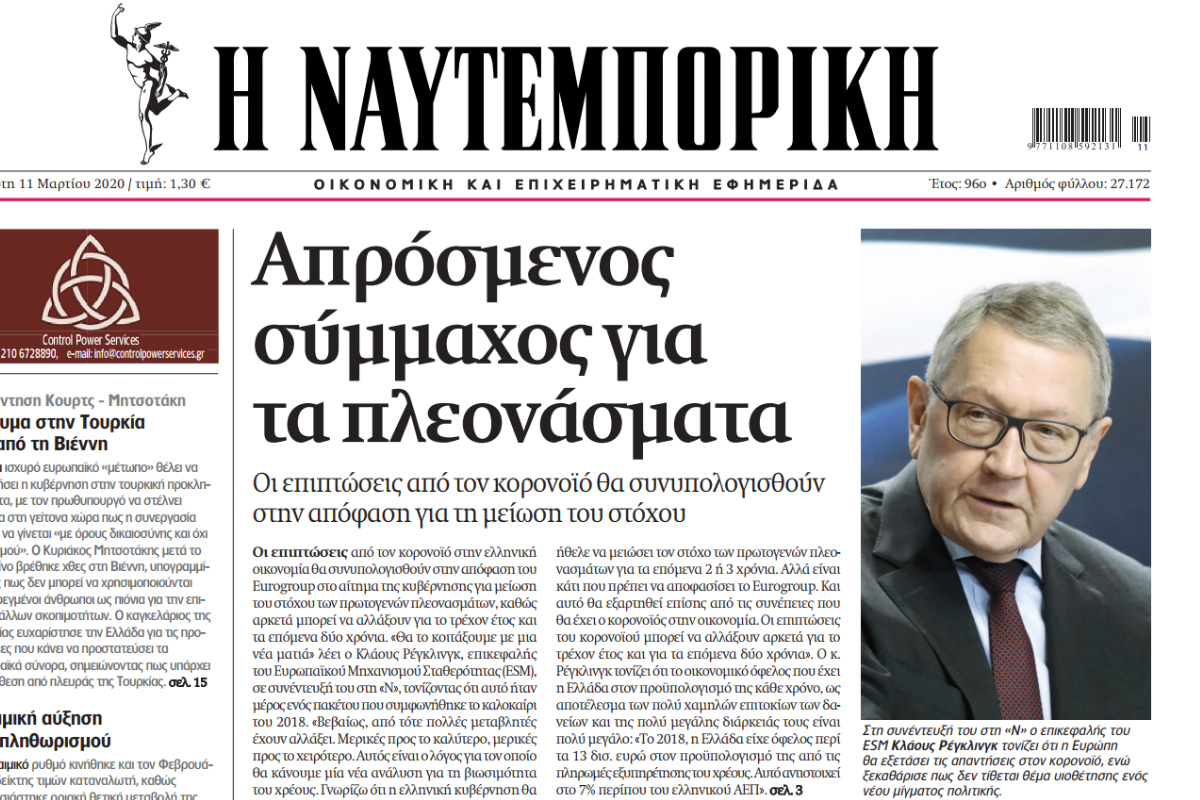 Naftemporiki: There is growing concern about the fast spreading COVID-19 (coronavirus) and its impact on the European economy. What do you see as the appropriate policy mix of precautious measures to support the economy?

Klaus Regling: This a new phenomenon. The economic consequences of the coronavirus are now much more significant than was expected until very recently.

The positive news is that parts of Asia, especially China, might now be behind the peak of this crisis. But I think in Europe, the peak is still ahead of us.

For the moment, it is not possible to quantify the economic impact on the world economy and Europe. But I am afraid it's going to be quite sizeable. Europe and all European countries have to be prepared for that.

I don't think it's a question of policy mix. Governments will think about their response. Most observers expect that the economic consequences of the coronavirus are a temporary phenomenon and that they will be felt for a quarter or two this year. Many governments think about short-term measures. In the Eurogroup, the finance ministers talked about it in a conference call Wednesday last week. Finance Minister Christos Staikouras participated in that call, of course.

We will have a meeting of the Eurogroup next Monday. We will look at responses to the coronavirus. But it's not a question of adopting a new policy mix. We will consider temporary measures. One example could be liquidity measures for affected corporates. This is not so much about macroeconomics policy measures.

When I look back at what has happened since 2012 and 2013 with regard to the debt relief measures, I see the following: The first really important milestone was in 2012 with the Private Sector Involvement, known as PSI. Private investors had to accept the biggest haircut in world economic history.

PSI was complemented by more debt relief measures from the public creditors in 2012, 2016 and 2018. That involved the EFSF and the ESM. All these debt relief measures helped Greece in a magnitude that is also unparalleled in history. If you add these three measures together, this amounts to gains of around 40% in terms of the Greek Gross Domestic Product (GDP) in what economists call net present value (NPV) terms. This was on top of the significant relief that PSI offered to Greece.

Also, please don’t forget the savings that Greece has in its budget every year as a result of the very low interest rates of our loans and their very long maturities: in 2018, Greece saved around €13 billion in its budget in debt service payment. That corresponds to around 7% of Greek GDP. Greece already enjoyed similar savings in the years before and will continue to do so for many years to come.

The two rescue funds ESFS and ESM own more than half of the Greek public debt. There is no debt problem for Greece. The reason is that the amount Greece pays to us is manageable as a result of the debt relief measures and because of our very favorable loan conditions with the very low rates and the very long maturities.

Given all these unprecedented measures to ease Greece’s burden, I see no reason to do anything on top.

But there is the question of a possible a third relief measure package in case of external pressures on Greek debt.

I don't see any reason to consider that. Up until very recently, markets have viewed Greece very positively. There was some reversal in the past few days due to uncertainty related to the coronavirus. But the current situation is still very positive compared to 3 months ago, for example.

Greece took advantage of the favourable market conditions to issue government bonds with very low interest rates. The markets were confident, the rating agencies upgraded Greece, everything was very positive.

Of course, there might be international economic consequences of the coronavirus. But as of today, I see no reason for real concern.

The world has left the financial crisis behind and there is a growing political pressure to change fiscal policy either to relax fiscal policy or make fiscal policy more expansionary. How do you feel about it?

That always depends on the economic situation. We left the crisis behind us already 4 or 5 years ago. There are no big macroeconomic imbalances anywhere in the euro area, unlike 10 years ago. For example, it is very positive that no country from the euro area has a fiscal deficit 3% of GDP at the moment.

And that is quite different from other major economies like the US with a deficit of around 6% of GDP, or Japan.

It also means: If there is going to be another crisis, there is fiscal space in Europe and that's positive. But of course, we hope that a crisis doesn't become so bad that we have to use all that fiscal space.

In this context, do you think it is sustainable for the Greek economy to maintain excessively high primary surpluses, more than agreed?

I would not describe the agreement on the primary surplus in Greece as excessive. For us, this was part of a package that was agreed in the summer of 2018, just before Greece exited its ESM programme, in order to reach debt sustainability in the medium term.

Of course, since then, many variables have changed. Some for the better, some for the worse. That is the reason why we will make a new debt sustainability analysis.

I know that the Greek government would like to lower the primary surpluses goal for the next 2 or 3 years. But that is something that the Eurogroup has to decide. And that will also depend a bit on the consequences that the coronavirus will have on the economy.

The effects of the coronavirus might change a lot for the current year and the next two years. We will take a fresh look.

In the end, our interests and Greece’s interests are aligned. Just as Greece and its citizens, we want the country to have a healthy economy in the long run with good growth and high employment.

With more than €200 billion in loans disbursed to Greece, we are by far the country’s largest creditor. We are a very patient creditor but we want to be repaid one day. The best basis for that is solid economic development with growth focused reforms in Greece.

You had a meeting with Deputy Finance Minister Giorgios Zavvos on Friday. The Greek government has a deadline until May to present a new bankruptcy law and at the same time Greek banks are accelerating efforts to drastically reduce non-performing loans (NPL). However, there is a growing political and public concern that this combination could lead to a wave of foreclosures and auctions of primary residents in Greece. How do you think this will develop? Are these concerns justified?

From the ESM perspective, it is important that the banking sector in Greece can again play its role to support growth in the economy.That means that there have to be new credits from the banks for the economy. That is something we have not seen in recent years because the banks are burdened by the very high level of NPLs.

So this clearly is something that needs to be fixed. The reduction of NPLs is a priority. The level of NPLs in Greece is by far the highest of any European country.

Regarding the details of how to do that, this is not for me to say. That is something that the Greek government, the central bank, deputy finance minister Zavvos and the European authorities have to discuss and decide.

Mr Zavvos informed us that they are working very actively together to come to conclusions and I am confident that that will be possible soon.