Cyprus: why an efficient insolvency and foreclosure framework matters - speech by Paolo Fioretti

My first words go to the European Commission and the Central Bank of Cyprus to thank them for organising such an interesting conference.

In my speech today, I will try to broaden the angle by giving a European view on some of the crucial domestic issues surrounding the ongoing structural reforms.

Cyprus was the fourth country receiving support from the European Stability Mechanism (ESM). Although the loans amounted to almost half the size of the Cypriot economy, Cyprus mastered its challenges, and successfully exited the programme three years later.

The country has since the start of the ESM programme managed to modernise its economy and its legal framework. It has restructured and recapitalised its banks, improved financial regulation and supervision. It has transformed its primary deficit into a surplus. Its public debt is now on a stable downward trend.

Cyprus can once again finance itself on the financial market with steadily declining financing costs. And the economy has experienced remarkably high growth rates, significantly exceeding the growth rates of its euro area peers. Growth is projected to slow down as rates converge to the country’s long-term growth potential. This is not a reflection of economic weakness but follows a common trend in other European countries.

However, it is a small, open economy and therefore exposed to external risks. And there are still vulnerabilities to tackle such as high public and private debt, and the still too high level of non-performing loans (NPL) in banks’ balance sheets, ranked as the second highest in the European Union. That is why it must continue the push for structural reforms. Improving the efficiency of the public sector, in particular the functioning of the public administration and of local government will help strengthen the economy, improve the business climate, and secure tax revenue.

For instance, and this relates to the discussion that brings us here today, Cyprus is ranked as one of the slowest within the euro area in enforcing contracts. For example, in 2017, according to a World Bank survey, the time required to enforce a contract was 1,100 days. That is almost two times longer than in Spain, Ireland, or Portugal. 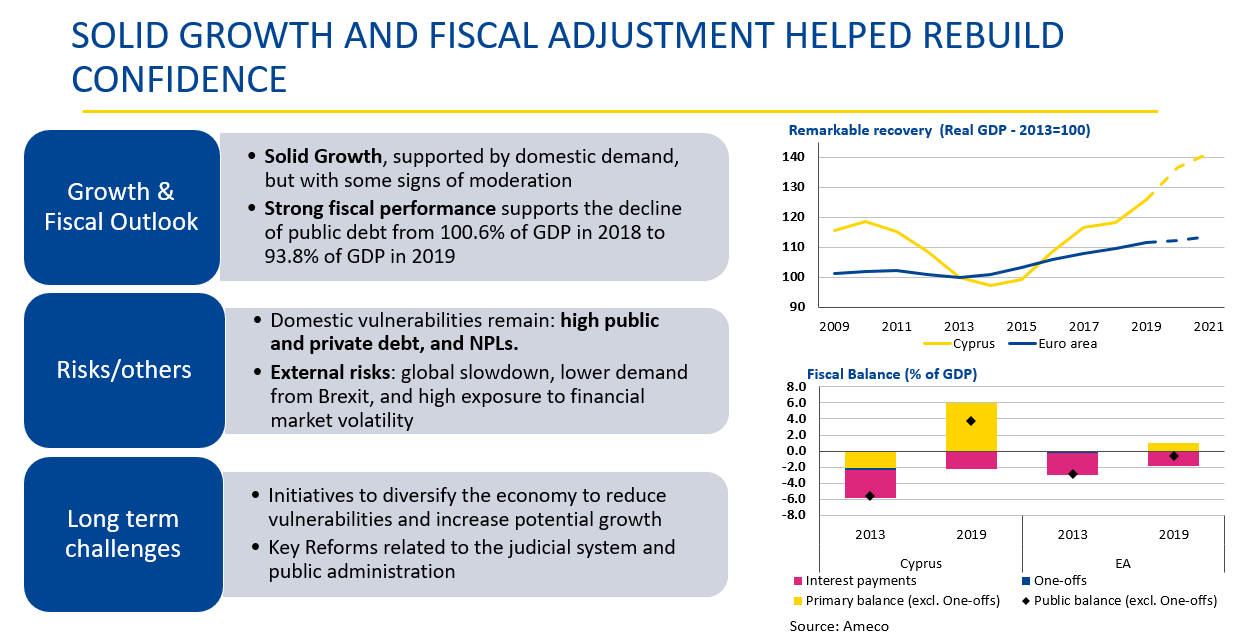 Again, let me reiterate that a lot has been achieved since the crisis. And there has been strong progress in reducing non-performing loans. The outstanding amount of bad assets in the biggest banks has been substantially reduced from a peak of €28 billion during the crisis to around €6 billion in the third quarter of 2019. That is an enormous effort. In particular, if we put it in relation to the country’s GDP: the reduction represented about 100% of Cyprus’s GDP.

However, the NPL ratio in Cyprus remains the second highest in the euro area. And the improvement was almost exclusively due to the transfer of NPLs to outside the banking sector. Private sector deleveraging has been more limited and sustainable debt restructuring has proven challenging.

Last year in June, we published a report evaluating the financial assistance programmes in the five former EFSF and ESM programme countries. One lesson that we can take away from ESM’s financial assistance to Cyprus is that putting in place from the beginning an explicit and comprehensive strategy for the financial sector, including the management of NPLs, was of utmost importance. This includes – among other measures – streamlining the insolvency and foreclosure frameworks.

Managing NPLs is a long-term process. But investors do pay attention and want evidence that real progress is being made to deal with the issue.

What would an efficient and stable legal framework bring to the table?

Very lengthy foreclosure and legal resolution procedures meant lenders had little incentive to take legal action to recover debt. Instead, they entered bilateral negotiations with the borrower. Often the borrower ended up pledging further collateral or just restructuring the loan. There were no consequences for borrowers who failed to repay their loans. This encouraged a culture of repayment delays and enhanced moral hazard.

Restructuring solutions became less sustainable as re-defaults and repeated restructurings become relatively frequent. Due to the lack of other viable options, banks have half of their NPL portfolios waiting for collateral enforcement, making the banking sector more reliant on an efficient foreclosure framework in order to clean their balance sheets.

Given that the time required for the foreclosures was so long, banks had to continue accumulating interest in arrears and provisions, which increased the potential negative impact on their capital in case of a sale of a foreclosed property.

A streamlined foreclosure process help banks address the issue of the so-called 'strategic defaulters', i.e. those who are able to pay but refuse to do so. A stable and efficient legal framework would create the right incentive for both the borrower and the lender to find a solution instead of stalling. A swift and predictable solution would increase the price of NPLs in the secondary market, as investors can better predict the outcome of the enforcement procedure. An efficient legal framework will help speed up the sale of NPLs and improve the sale price of distressed assets.

In the end, the result would be a more profitable banking sector, leading to a healthier economy with a strong business environment.  This in turn would attract foreign investors, no longer worried about being stuck in bankruptcy proceedings. 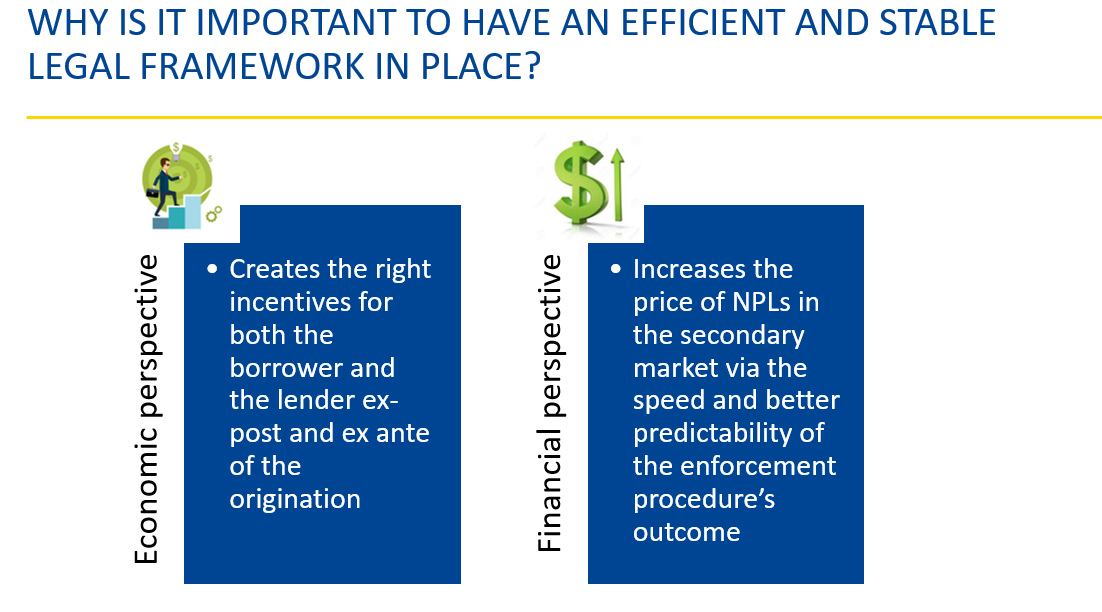 Where does Cyprus stand right now?

According to the World Bank’s Doing Business report, “resolving insolvency” has improved significantly in Cyprus.[1] Nevertheless, it remains weaker compared with other countries that received financial assistance during the crisis. 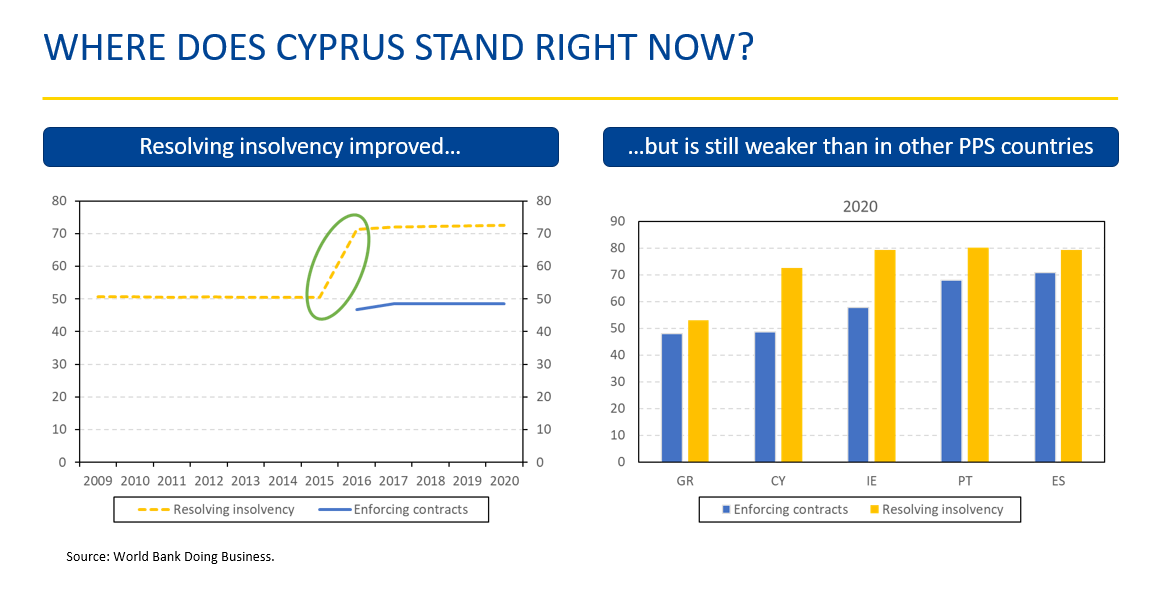 The 2018 amendments to the foreclosure and insolvency legislation addressed some of the shortcomings of previous reforms. This resulted in a gradual increase in notifications on foreclosures and the sale of properties, including the repossession of foreclosed properties by banks. You will recall ratings agencies applauded the government, at the time, for taking these decisive steps to reduce the number of problematic loans.

The reforms streamlined both foreclosure and insolvency frameworks. E-auctions were introduced, the notification of borrowers became much less cumbersome for the banks, and the auction process was further facilitated. With the new insolvency law, the definition of secured debt was clarified and the borrowers’ repayment plans were streamlined.

Still, to make the most of the reforms and help resolve the backlog of cases, more institutional efforts are needed. An efficient application of the legal framework is key. Efforts to ensure there are a sufficient number of specialised judges must continue. There should be a strong emphasis on the electronic processing of applications and cases. Moreover, the use of civil procedures must improve to make court proceedings swifter.

The business environment will improve with a more efficient system for issuing and transferring title deeds, and by enhancing banks’ access to information on the financial position of their borrowers. 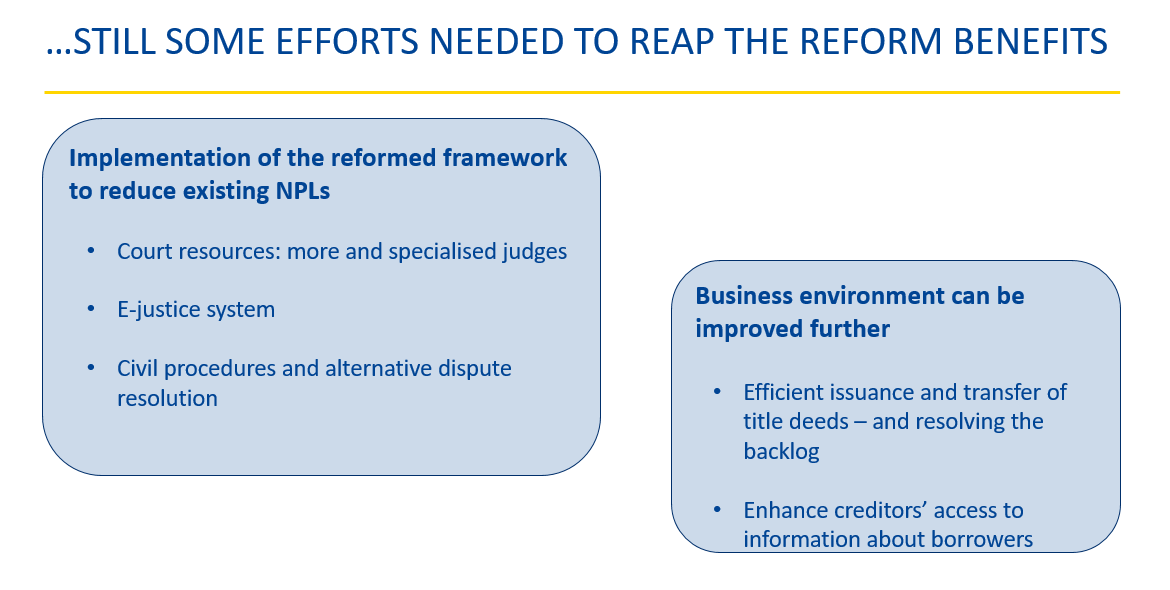 How to improve further?

I have already made the point that it is important to maintain a stable and predictable legal environment. It will lead to less volatile and more favourable and predictable NPL prices. This is crucial for dealing with legacy issues related to unresolvable loans. It will also help to increase the banking system’s resilience going forward.

In this respect, any amendments to the legislation that introduce uncertainty and weaken the effectiveness of the framework would have the opposite outcome. It could result in lower investor appetite. It might even lead to further provisioning requirements and eventually additional capital for the banks, adversely affecting the sale price of NPL portfolios. This has to be assessed carefully.

At the European level, completing Banking Union would be an important step forward. Liquidation procedures remain a national competence. As a result, Member States have quite different approaches to the liquidation of banks, which means different approaches to the treatment of creditors and depositors, legal uncertainty, and inherent litigation risks.

But harmonising national insolvency regimes would result in the same effectiveness in all countries. Therefore, the expected outcome of the procedure would also be the same, no matter which country the NPL is from. This, in turn, could help stimulate secondary market transactions for NPLs across borders and accelerate the solution of Cyprus’s legacy NPL problem.

Ultimately, the cross-border ownership of assets would strengthen the European banking system and increase the liquidity of the financial market. The euro area would be more attractive to investors. For Cyprus, this would be even more beneficial given the limited size of its secondary market.

Future of the Economic and Monetary Union (EMU): the role of the ESM

Which brings me to my final point: the ESM’s new mandates. The ESM reform is part of a comprehensive package of measures to deepen monetary union. The measures include work on completing banking union with the common deposit insurance scheme (EDIS), Capital Markets Union (CMU) and the budgetary instrument for convergence and competitiveness (BICC).

The ESM will act as the common backstop to the Single Resolution Fund (SRF). This entity at European level will intervene in case a large bank gets into serious trouble and needs to be resolved in an orderly fashion. If the SRF’s resources are depleted, the ESM can step in and lend the necessary funds to finance a bank resolution.

In addition, together with the European Commission, the ESM will be more involved in the design of future programmes and will follow euro area country developments.

So enhancing the role of the ESM will strengthen banking union and help the euro area to be better prepared for the future. A stronger financial framework will help boost investors’ appetite in euro area assets irrespective of a country’s size. 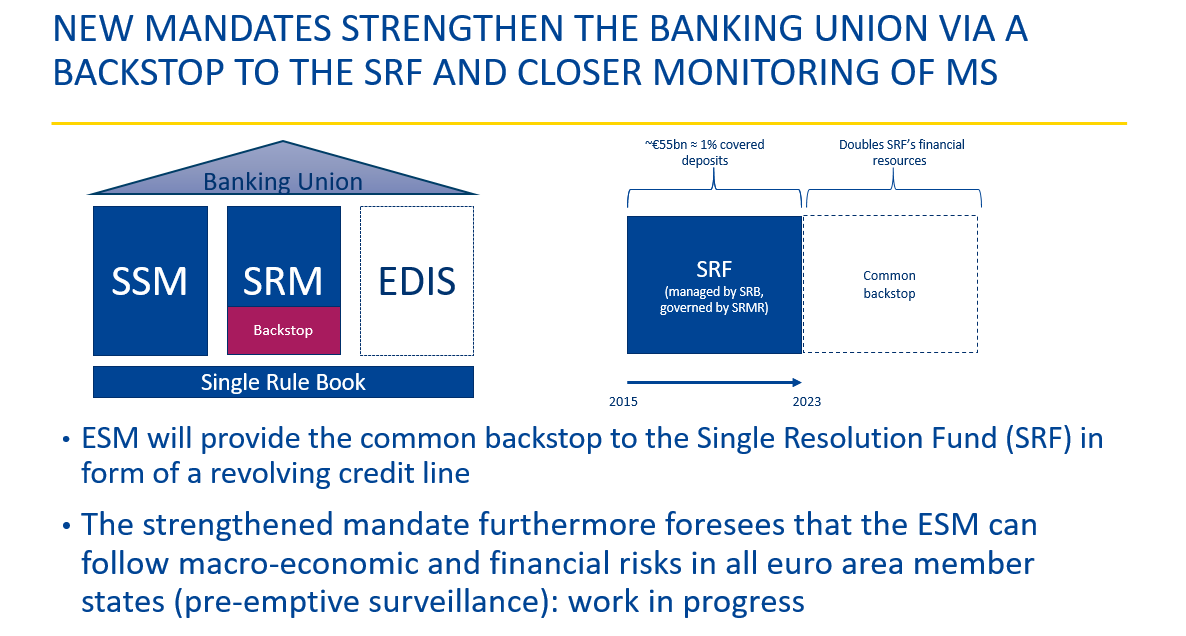 There is still some way to go to complete banking union. And we will continue to work on this at the European level while I am sure, here, in Cyprus, financial institutions and public authorities will continue to push for reforms to modernise the economy and make it more efficient. We should not wait until the next crisis before deepening EMU further.

Let me conclude here. I am looking forward to a lively debate to discuss these issues with the panel and the audience.

[1] The World Bank’s Doing Business report studies the time, cost, and outcome of insolvency proceedings, as well as the strength of the legal framework.