Can the euro area respond adequately to the next crisis with its current instruments?

Rolf Strauch, ESM Chief Economist
“Can the euro area respond adequately to the next crisis with its current instruments?”

The euro area has come a long way since its worst recession in 80 years. A mix of policy decisions helped to put the crisis behind us, including deep reforms in countries that received EFSF and ESM loans as well as the unconventional monetary policy of the European Central Bank (ECB). At the same time, the coordination of economic policy at EU level has improved significantly.

And the institutional architecture of Economic and Monetary Union (EMU) has been significantly strengthened by two quantum leaps: first, the Banking Union, with the Single Supervisory Mechanism (SSM) and the Single Resolution Mechanism (SRM).

Thanks to these measures, the euro area is now much stronger and better prepared to deal with a potential future crisis. But the reform agenda needs to be advanced to be able to respond adequately to the next crisis.

Last December, the Heads of State and Government endorsed a package of reforms to strengthen the resilience of the euro area. The further development of the ESM is a major part of this reform package.

The ESM will provide a backstop for the Single Resolution Fund (SRF) that will be introduced at the latest by 2024. The SRF is financed by contributions by the banking sector and its target size will be around €60 billion.

In close cooperation with the European Commission, the ESM will also take a stronger role in the design, negotiation and monitoring of financial assistance programmes.

The Euro Summit in December also decided to make the eligibility process for the ESM’s precautionary credit lines more transparent and predictable. We want to make them easier to use, without attaching stigma for the requesting country.

Finally, the ESM’s approach to debt sustainability will be made more transparent and predictable. The ESM will be able to facilitate the dialogue between a euro area country and private investors when there is a debt restructuring. Moreover, the contractual arrangement for euro area sovereign bonds will be changed as to allow for private sector participation in a debt restructuring.

The December Euro Summit also tasked the Eurogroup to work on the design of a euro area budgetary instrument for convergence and competitiveness. Technical work is expected to progress in the next few months.

Policy makers also continue reflecting on an instrument for economic stabilisation. This debate is not yet matured and several proposals have been put forward. The ability of euro area countries to weather asymmetric shocks could be improved through a euro area budget, which could focus on investment, or take the form of a short-term ESM credit line.

The question is, what else should be done?

Highly integrated financial markets and efficient cross-border capital flows are crucial for financial stability and monetary policy transmission. For the time being, however, the integration of European capital markets remains limited. In fact, the level of financial market integration in the euro area is lower than before the financial crisis (see Graph 1). This is worrying because financial integration provides risk-sharing mechanisms which can reduce the impact of country-specific shocks and contributes to macroeconomic stability. 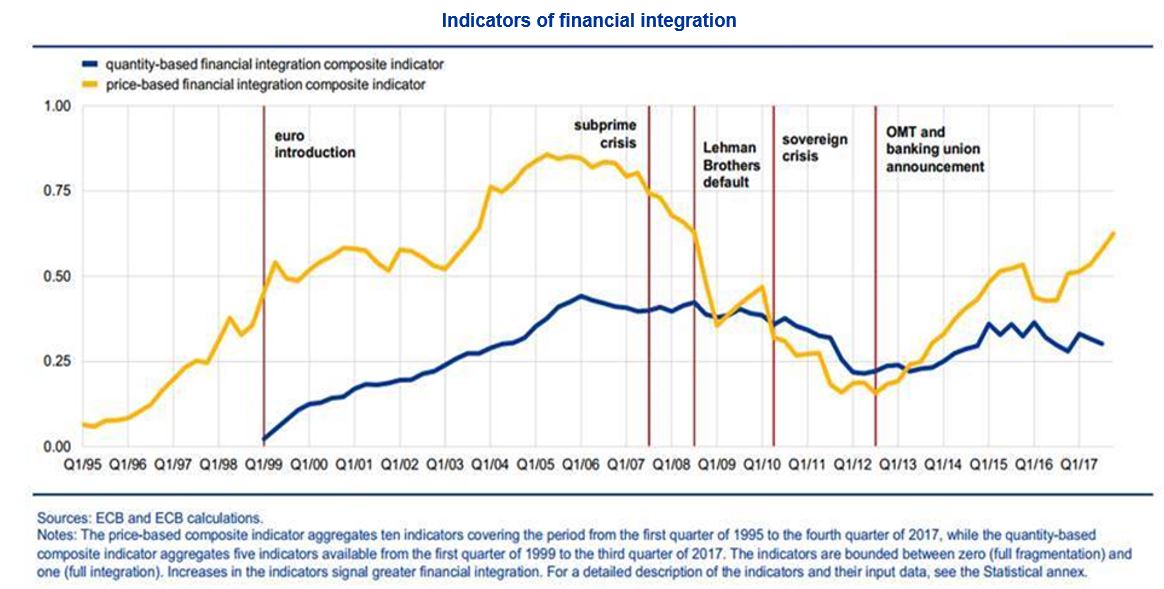 Creating a Capital Markets Union (CMU) would not only lead to more diversified funding sources, but even more importantly, should pave the way to remove cross-border barriers. It is noteworthy that even at the peak of the global financial crisis, equity investment proved to be a fairly stable source of financing in terms of capital flows; quite different from the reversal of credit flows. This observation indicates that capital market integration would further enhance Europe’s resilience if a new crisis were to occur.

The European Commission is striving to put the building blocks of a Capital Markets Union in place by the European elections this year. It is important to lock in as much progress as possible. But in my view, these efforts need to continue. We also need to work towards the harmonisation of insolvency regimes, and some aspects of taxation for a common financial market.

Due to the regulatory measures taken during the crisis, banks are safer today than they were before the crisis. Regulation has been tightened and harmonised and the capital of banks has increased substantially (see Graph 2). We have reached a point in the Banking Union where one needs to consider the degree of banking sector integration we are hoping to achieve within a homogeneous banking market. There are several proposals that would make it easier for European banks to operate across borders in a “healthy” Banking Union. 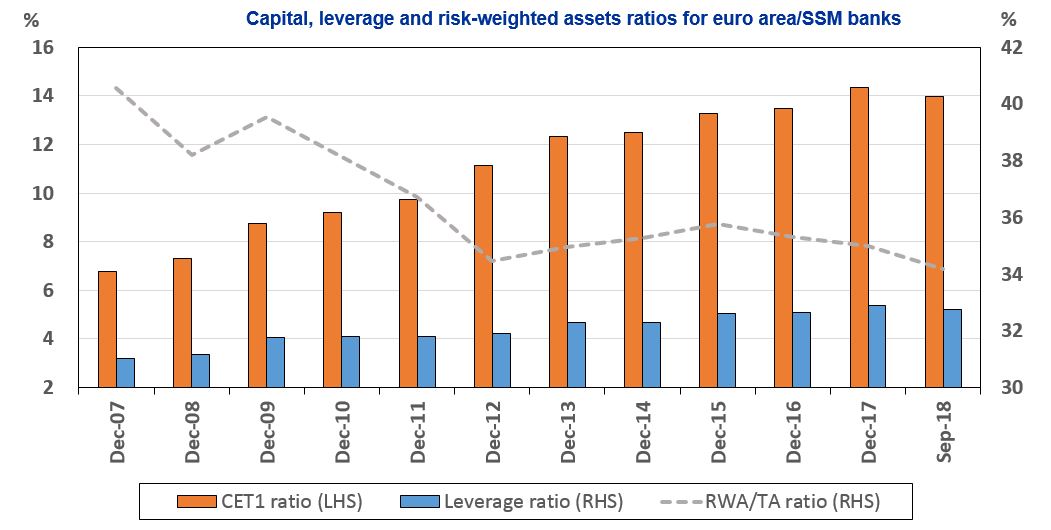 One of these proposals is a common European deposit insurance, which would guarantee the savings of individual depositors irrespective of their location. It would reduce the bank-sovereign feedback loop, and also promote cross-border banking operations. Needless to say, such a deposit insurance can only be put in place if legacy issues – in the form of bad loans – continue to be addressed (see Graph 3). 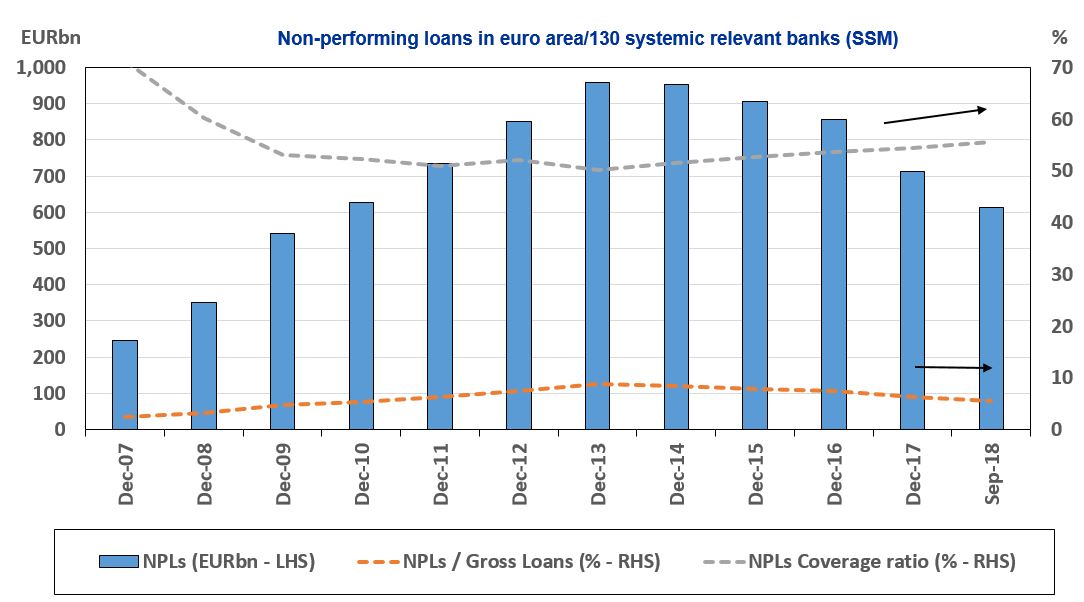 For a common banking market, banks must be able to operate in the appropriate form that is profitable across countries. The current rules for banking groups force them to have part of their capital and liquidity blocked at the level of their subsidiaries. I favour a proposed waiver on liquidity and capital requirements for banking groups. This would be one measure which leads to a better allocation of capital and liquidity.

Another element is again the harmonisation of insolvency law in Europe. A proposal for a European directive has been made by the European Commission and I hope we can progress on that basis.

Let me conclude on a positive note. Can the euro area respond adequately to the next crisis with its current instruments? The creation of Banking Union, and the establishment and further strengthening of the ESM have supported financial stability in the euro area.

However, more steps towards the integration of European banking and capital markets are needed to complete the process. It is clear that in the future, we cannot exclusively rely on markets in deep crises. Therefore, necessary steps to develop fiscal instruments at national and European level should remain on the agenda and be pursued in parallel.

Equally important is that policy makers in the euro area have shown the capacity to learn and change to address the crisis. It is not possible to predict every adverse occurrence that could potentially threaten the euro area in the future. The driver of the next major crisis could be cyber risk, for example.

Each crisis event creates the need for learning and change. I am confident the euro area will have that capacity in the future as well.