“Experiences with post-programme countries: views from the ESM” - speech by Rolf Strauch

Thank you very much for the opportunity to speak at this topical panel.

I will now explain these elements in more detail.

National ownership of the reform process clearly improves the outcome of a programme, and is an important ingredient of its success. Programme ownership also helps to establish market credibility and eases regaining market access.

All programme countries are reform champions. Taking the last eight years together, these five countries have adjusted their economies thoroughly. The structural changes they have implemented will form the basis for their future successes. 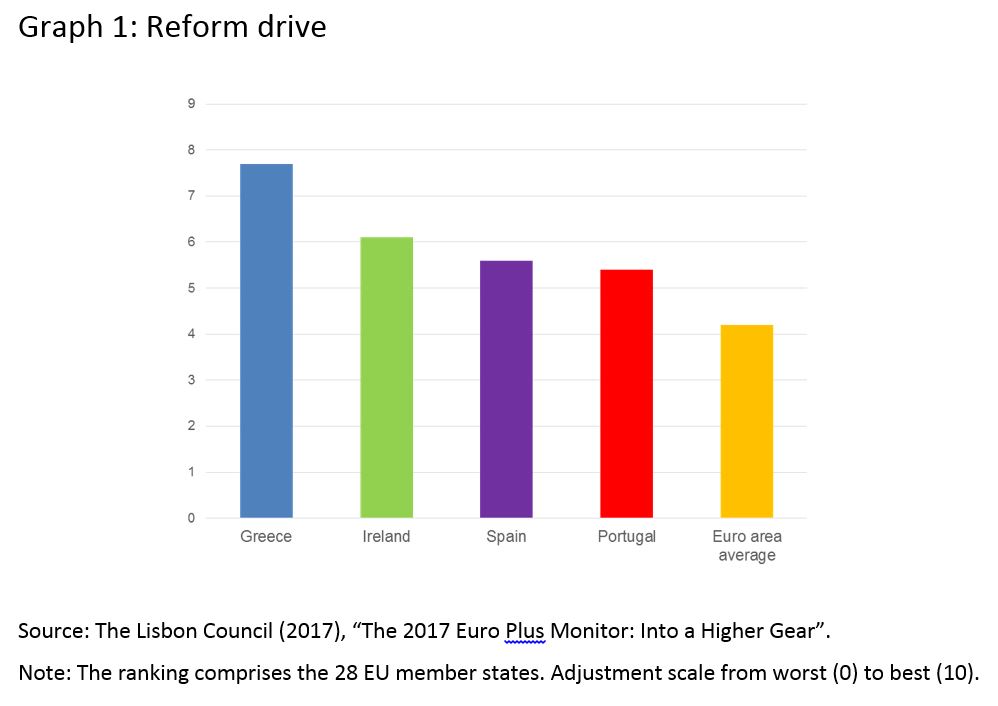 When we look at the progress countries have made in terms of reform intensity, among all programme countries Greece ranks number 1 (see Graph 1). At the same time, it is also fair to say that Greece had the highest reform needs.

By now, four countries that participated in an ESM adjustment programme have successfully exited. Cyprus, Ireland, Portugal, and Spain have ended their programmes, and their economies are performing well.

Ireland’s economy grew by almost 8% last year and Cyprus by almost 4%, according to the latest European Commission figures. This makes them growth champions of the euro area. The performance of the Greek economy has also improved after the turn-around in 2015 and we hope that Greece will be able to catch up with the rest of the euro area to overcome the losses of the crisis.

After the programme, stick to reforms

For economic convergence and market access, the commitment to stick to the reform path beyond the programme is essential. Without doubt it is tempting for governments to ease the reform pace once a programme is over. After all, reforms are often politically unpopular and the economy starts recovering.

While the benefits take several years to materialise, they can come at a high political cost. But the experience of other countries leaving the programme before Greece, very clearly tells that during that process, a clear and credible policy path is a necessary condition for success. If a government wants to permanently restore credibility in financial markets, it needs to stick to modernising its economy on a lasting basis and show fiscal prudence.

I would like to illustrate this argument with an example. During late 2015 to early 2016, Portugal experienced a period of market uncertainty when the new government came into power. At that time, Portugal was still in a position where it was very vulnerable to shifts in market sentiment. Markets started doubting the policy course of the new government. This in turn triggered a loss of investors’ trust, and market access became increasingly expensive.

Yet, Portugal managed to regain investors’ trust by pursuing a prudent fiscal policy and further working on the banking sector. Incoming budget figures corrected market views and Portugal was upgraded by rating agencies. The country turned out to be the biggest winner in last year’s sovereign bond markets. The example goes to show how critical it is for a country to keep the trust of markets.

Financial support by the ESM

The second element for market access after an assistance programme is manageable refinancing needs and investor trust in the liquidity of the country. ESM financial support has helped countries substantially. It comes with favourable lending conditions from which countries can benefit for decades. The ESM offers favourable loan conditions with long maturities and low rates. We essentially pass on the financial benefit from our high creditworthiness to beneficiary member states. Further to that, ESM granted long grace periods to beneficiaries of up to ten years after the programme. For example, the beginning of repayment of the principal for Portugal is due in 2025 and for Ireland in 2029, in both cases more than 10 years after the end of the programme. For Greece, as a special case, the maximum weighted maturity of loan tranches was extended to 32.5 years and interest and principal repayments deferred for 10 years.

In the case of Greece, we estimate that the favourable lending conditions of the EFSF and the ESM compared to a hypothetical market financing save the Greek budget €10 billion or more each year, i.e. around 6% of GDP.
Finally, countries that lost market access have left the programme with a large cash buffer, covering one year or more of financing needs after the programme. Debt managers of these countries told us that this is also an important reassurance for investors, in particular for countries with sub-investment grade ratings.

Greece is due to leave its ESM programme in August. The aim is to achieve sustainable and lasting growth in Greece. To achieve this, both sides are working under tight deadlines.

While the institutions still need to prepare a final debt-sustainability analysis (DSA) ahead of the next Eurogroup, the Greek authorities from their side need to complete all remaining prior actions.

In particular the last programme review was concluded timely and we welcome the commitment of the Greek government to now follow up to allow for a decision in June.

Then we will have the basis for an assessment of what measures may be needed to reach debt sustainability for the country.

The Eurogroup also needs to agree on a suitable post-programme arrangement setting the right incentives to follow the reform path. Finally, a decision that needs to be made is on the size of the last payment, which will be used to build a substantive cash buffer.

Greece has come a long way in terms of reform efforts, and will be able to build on this commitment in the future.

What matters most until August and beyond, is to keep full programme ownership. This is key for a sustainable return of Greece to the financial market.

Greece has already tested the markets at several occasions. But as I mentioned before, programme countries are very vulnerable to shifts in market sentiment when they exit a programme. And in the case of Greece, the starting conditions in terms of market access are more difficult if the ECB does not approve Greek bonds as eligible collateral. This makes a consistent reform effort even more necessary.

In sum, two elements matter for a successful transition out of a programme:

The Greek authorities are working on this and the European partners as well. Thank you.

The Lisbon Council (2017), The 2017 Euro Plus Monitor: Into a Higher Gear,
https://www.lisboncouncil.net/publication/publication/145-the-2017-euro-plus-monitor-into-a-higher-gear-.html