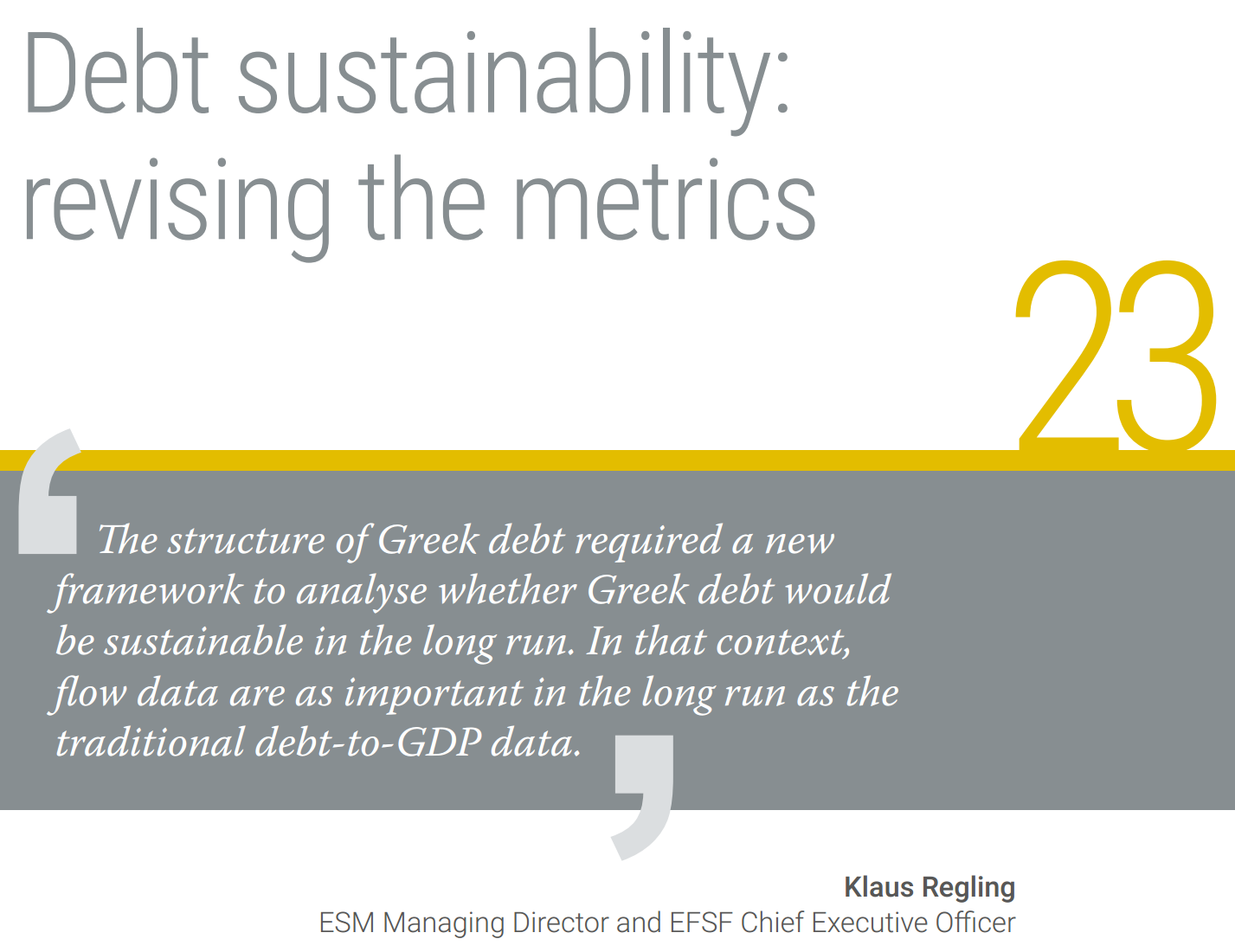 Europe’s first rescue programmes, from the bilateral loans for Greece to the EFSF-led packages for Ireland and Portugal, were designed to operate in part on the principle of dissuasion, as well as to encourage a smooth programme exit. Short-term lending at elevated rates was intended to spur aid recipients into quickly reinstating sound economic and fiscal policies, so they could return to market financing that would be cheaper than the cost of the rescue loans.
The Greek experience of 2010 and early 2011 led the euro area to consider a different approach to lending terms. A first step came in March 2011[1] when the EU agreed[2] to lower the rates on Greece’s bilateral loans by 100 basis points and to extend the maturities. In committing to these and other ‘more far reaching measures’ in July 2011, Euro area leaders also indicated a willingness to ease lending terms to Ireland and Portugal to align with what was now on offer to Greece[3].
At the time, Greece was still paying a 200 basis point surcharge on its first programme. While euro area policymakers discussed more easing of terms, the IMF proposed replacing its stand-by arrangement, which had been put in place alongside the bilateral loans, with a different tool, the extended fund facility, which provides for a longer engagement and repayment period.
‘There were two basic options,’ said John Lipsky, who served as acting IMF chief in 2011. ‘One was to stay with the existing programme, which in any case was going to require additional funding than had been planned initially. As a result, this option meant that those supporting the program were going to have to pay more just to achieve – at best – the original goals. Or, we could move to an extended fund facility in the context of strengthened and lengthened policy commitments. The second option, therefore, meant pay more, but get more.’
The IMF, supported by the European Commission, initially proposed moving to the extended facility deal in mid-2011, before debt restructuring was on the table. The IMF wanted to make the change alongside a funding increase from the euro area and additional reform commitments from Greece, Lipsky said. But, when European finance ministers met in June of that year, the proposal failed. Several of the euro area’s smaller countries rejected the plan, even though it had support from bigger member states. ‘Without a new agreement, the situation continued to deteriorate to the point that it was clear to all that debt restructuring of some kind had become unavoidable. Thus, there was almost an entire ‘lost year’ as this new deal was hammered out,’ Lipsky said.
The IMF eventually took this step in March 2012 as part of Greece’s second programme. Then in November 2012, after lengthy negotiations, euro area finance ministers agreed in principle to a second set of debt relief measures[4] – a recognition that the initial rescue loans had been too expensive to ensure sustainability.
Known as ‘re-profiling’, the measures covered the first and second aid packages. Loan maturities from both programmes were extended by 15 years. For the bilateral aid in the first programme, the Greek Loan Facility, the interest rate was lowered by a full percentage point and repayment schedules for the loan tranches were extended. For the EFSF loans in the second programme, which already had significantly lower borrowing costs, the Eurogroup agreed to a 10 basis point cut in guarantee fees, along with a 10-year grace period before Greece would have to pay any interest at all on most loans. Finally, the EU Member States also agreed to pass on to Athens profits deriving from Greek bonds held by their national central banks, starting with fiscal year 2013.
In designing these measures, the Eurogroup took care that the changes wouldn’t require a budgetary contribution from member states or hurt the EFSF’s creditworthiness. The euro area also ruled out writedowns of the principal outstanding amount on Greece’s rescue loans. Throughout the discussions on debt relief, the other euro area member states have held firm that Greece must repay its borrowings in full.
Stournaras, who became Greek finance minister in July 2012, commended the firewall team for helping arrange the debt sustainability measures under the November 2012 accord, which also extended the aid period of Greece’s second programme by one year. ‘That was a crucial decision,’ he said. ‘It could not have taken place without the ESM, without an organised team to deal with this issue.’
Taken together, the lower rates and maturity extensions made a big dent in Greece’s debt burden, both improving its immediate public financial outlook and dramatically reducing its long-run costs. At the same time, the member states acknowledged that they might need to do more for Greece, a promise that was to prove increasingly important in the years ahead.
A second round of re-profiling for Ireland and Portugal came up in 2013, when those two countries were again pressing for equal treatment. Greece’s second programme had been overhauled at the end of 2012 and it became clear that the country was once again not on an equal footing with its fellow aid recipients, even though the country was doing a better job than it had been at following through on its reforms.
For Ireland and Portugal, which both had better track records within their programmes as well as substantial financial burdens, the prospect of a second round of re-profiling seemed possible and fair. At first, Greece was viewed as a special case, but gradually the discussion broadened to cover the re-profiling of loans for Ireland and Portugal as well, said ESM Chief Economist Strauch. 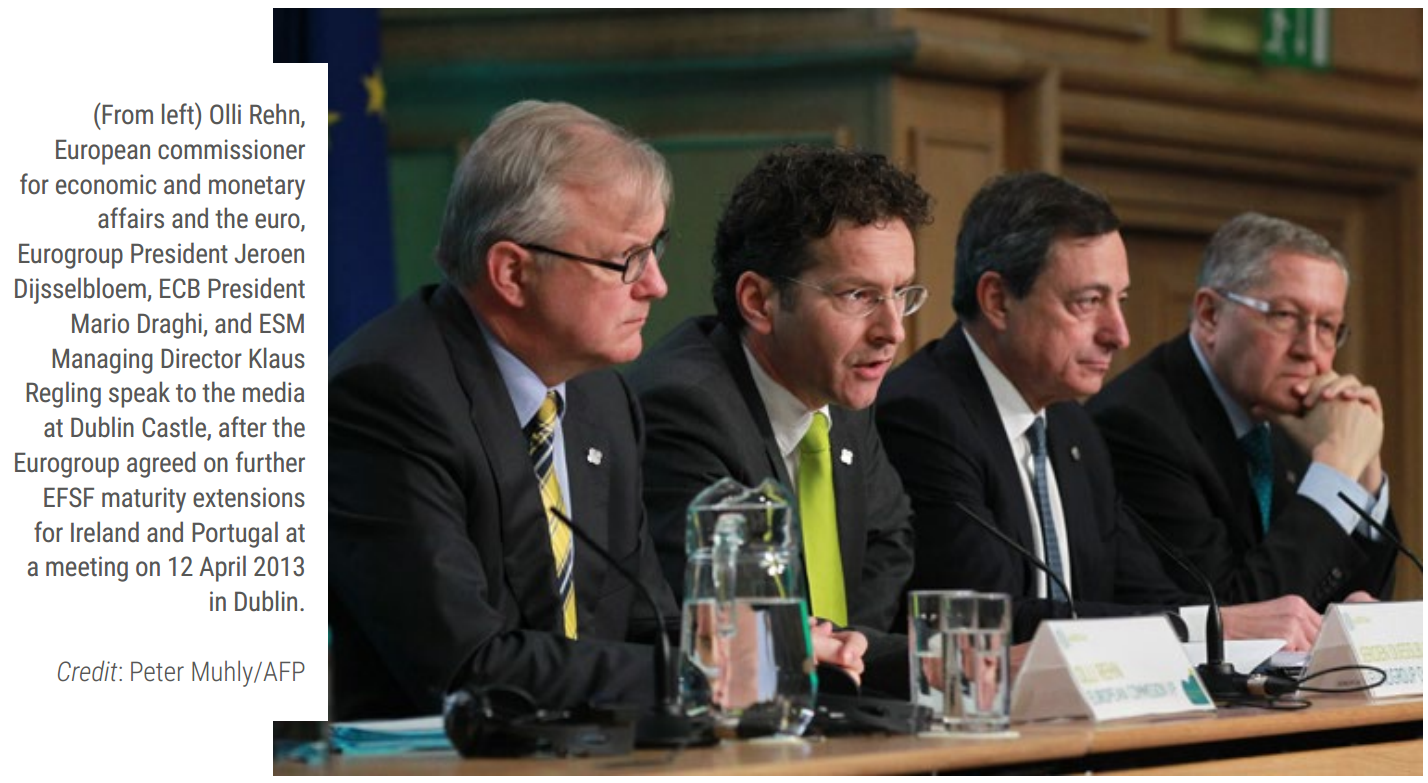 Euro crisis managers saw maturity extensions as a way to wean Ireland and Portugal off their programmes and lower the non-repayment risks for European taxpayers. If they lengthened the weighted average maturity, an average of the due dates of multiple loans, the annual burden of servicing debt would decrease and the bottom-line cost of repaying the debt would fall, brightening both countries’ public finance pictures.

For more on budget savings from rescue fund loans, see Chapter 38.
Ireland was already en route to a return to global capital markets, and the new terms helped smooth out its future repayment timeline and plan new bond sales. ‘Once our debt was re-profiled, the Irish debt management office had a better window of opportunity to restart their issuance. The extension gave them room to improve their market presence,’ said Giammarioli, the EFSF’s mission chief for Ireland at the time as well as the head of the rescue fund’s strategy team. Easier debt terms for Portugal also would mark a major step towards regaining market access.
‘For Greece, the decision was to guarantee debt sustainability, while for Portugal and Ireland there were no doubts about debt sustainability,’ Giammarioli said. ‘The political decision at the Eurogroup was not controversial, but the implementation was technically complex.’
Over time, policymakers’ embrace of more flexible conditions for programme countries – in effect, treating them as clients or partners – gained a theoretical underpinning with the debt sustainability framework that ESM Managing Director Regling advocated as the most accurate measure of a country’s ability to repay its loans. The debate gained momentum over the course of 2013, after Greece’s second programme got fully underway at the end of 2012.
‘One should not only look at the level of debt,’ Regling said in a 2013 interview with the Wall Street Journal [5]. ‘One has to look at how it’s financed. And we know today that the EFSF represents the biggest share of Greek public-sector debt and that it will continue to be financed for the next 30 years at very low interest rates. That has to be taken into account, it was not taken into account sufficiently in the past.’
IMF Managing Director Lagarde credits Regling with crafting solutions that were economically sound and politically feasible. ‘The benefit of the ESM’s contribution is to have identified the importance of extending maturities to enhance debt sustainability,’ Lagarde said.
The IMF’s usual method focuses mainly on the debt-to-GDP ratio as an indicator of debt sustainability. Under Regling’s guidance, the euro area has emphasised a different metric that shows Greece’s debt to be on more sustainable footing because favourable EFSF and ESM lending rates and long maturities give it ample room to keep up with its obligations. Under the concept of gross financing needs, made up of interest payments, principal repayments, and the primary deficit, the ESM examines if a country can meet future payments as they come due, rather than if the total stock of debt is too high.
As far back as 2011, the IMF had been examining alternative ways to gauge repayment prospects, depending on the structure of the debt and the situation of the country. The ESM went further, studying Greece’s debt-servicing costs and concluding that Greece’s financing trajectory could be sustainable. The ESM’s flow analysis lessens concerns about Greece’s ability to repay its official sector debt over time.
Prior to Regling’s contribution, the IMF had concluded that Greece’s debt was perhaps too large given the size of its economy, and it pushed the euro area to consider an official sector writedown. But such a move would be at odds with the currency area’s consistent philosophy and the EU Treaty’s no-bailout rule. Looking at Greece’s payment outlook, instead of its debt-to-GDP ratio, allows the EU to bolster its case for requiring all official sector loans to be repaid in full.
To be sure, the IMF also factors gross financing needs into its computation of debt sustainability, subjecting countries that overstep a critical threshold to closer scrutiny. But IMF loans are much shorter than the ESM’s, rarely exceeding 10 years, and the Washington-based lender puts more weight on overall debt-to-GDP ratio to assess repayment ability.
The difference from the ESM is one of emphasis. Regling put the spotlight squarely on gross financing needs, especially for Greece, because the rescue fund provided large sums with very long maturities and low interest rates. It will be decades before a large part of the Greek debt comes due. So, although the level of debt has not changed, Greece’s repayments are spread over a lengthy span of time and it will not need to start principal repayments – the outflows that will make up the largest component of its financing needs – for many years. Thus the ESM methodology shows that Greece’s debt trajectory is more sustainable than some of the more pessimistic models would suggest[6]. During and after Greece’s third programme, when debt relief would be a central part of the policy agenda, this metric would be more important than ever.
Regling made the case ‘very forcefully and effectively’ for using a different metric for Greece, Lipsky said. ‘Klaus made the right points and I think won the argument.’