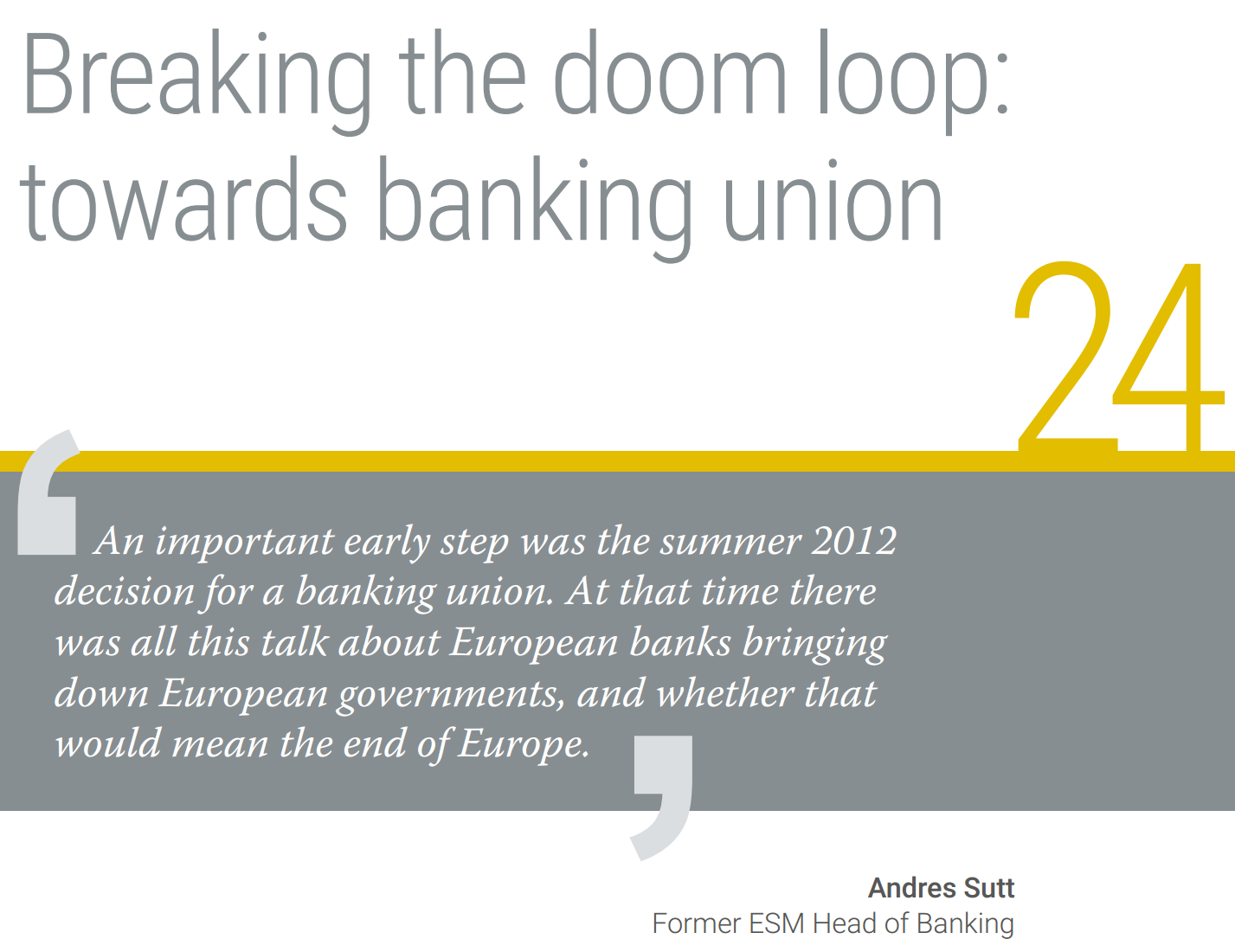 For more on the direct recapitalisation instrument, see Chapter 34.
Although that instrument was never deployed, Andres Sutt, then ESM head of banking, called it an important part of the arsenal. ‘It’s better to have the option in your toolkit than not have it at all,’ Sutt said. ‘If things get really bad, then you have something at hand to use.’
Another European priority during this period was to draw up a legal framework for dealing with troubled banks, setting out a clear hierarchy for assigning losses to different classes of investors. The landmark bank recovery and resolution directive was set up to govern the treatment of failing banks. It requires banks to create recovery and resolution plans ahead of time and began taking effect at the end of 2014[12]. These rules, which apply to the entire EU, not just the euro area, changed the parameters for the ESM bank recapitalisation instrument even as it was being developed.
The core principle of the directive is that bank creditors such as shareholders and bondholders must bear losses before any public support can be drawn upon. This reflected a standardising and toughening of previous EU approaches on public aid to banks, which limited state aid under EU competition law but didn’t dictate losses in such a specific way.
In Ireland and Spain, for example, the question of whether or not and how to force senior bank creditors to take losses became an integral part of the debate around their rescue programmes. At one point early on, Ireland had wanted to ‘bail in’ – or impose losses upon – senior bank bondholders as well as junior investors, only to be dissuaded by its fellow euro area member states. At that time, there was a view that pushing bank bonds into default could further escalate the crisis.
By the time it became apparent that Spanish banks would need recapitalising, consensus was building around the idea that junior creditors, at least, should always absorb losses before taxpayer funds were put at risk. But the idea was still controversial, particularly because in some countries bank bonds were marketed to consumers as equivalent to cash savings accounts, even though they posed greater risks.
The bank recovery and resolution directive aimed to make clear to investors up front what risks they were taking. It became an essential part of the long-term effort to strengthen the euro and its financial architecture. In a move to limit the tapping of taxpayer funds, the directive also required the banking industry to fund the cost of resolution wherever possible. To accomplish this, every EU Member State was required to set up a bank resolution fund financed by industry fees. Some countries already had a system in place, while others had a deposit insurance scheme to coordinate with. Even after the euro area created a common resolution system for the currency area’s biggest banks, countries also continued to need national systems for banks not covered by regular ECB supervision.
Since 2016, the euro area has had common systems for two elements in banking union, supervision and resolution[13], and it is establishing rules on national frameworks for the third, deposit insurance[14]. Proposals for a common deposit insurance system, which would complete the banking union fully, may take time before they are ripe for agreement, given important legacy problems with banks in several member states and sizeable non-performing loan problems in some countries.