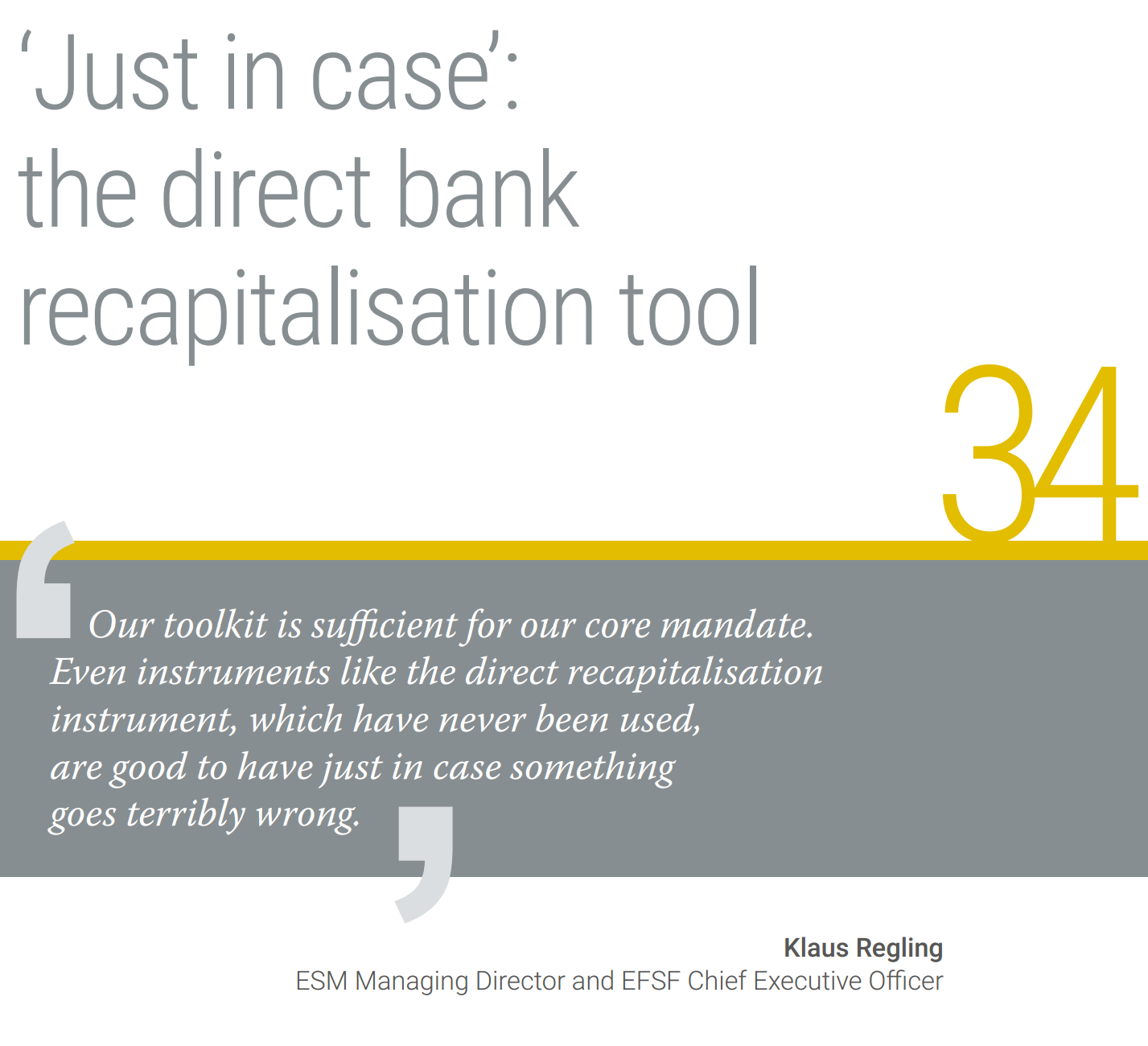 The ESM’s banking team staged two trial runs of the bank recapitalisation tool, to test it out in practice. The drills were called Project Carlo and Project Hugo, named after the streets around the ESM’s headquarters that honour the Luxembourgish economist Carlo Hemmer and the Luxembourgish- American inventor and science fiction publisher Hugo Gernsback.
‘It was really a demanding exercise because we were under enormous pressure, as if it were really happening and not just a test,’ said Sutt, former ESM head of banking.
Activating the instrument would involve the entire banking team, supported by most of the rest of the ESM. For the first dry run, Project Carlo in March 2014, the ESM also worked with a financial advisory and asset management company, to prepare the exercise and a 600-page handbook on the tool.
The practical tests revealed that the tool had unexpected drawbacks. One of the principle takeaways was that the tool would not be the rapidly deployable emergency instrument that had been intended. Distressed banks would need to have their national government lodge a formal request with euro area finance ministers, the ESM’s directors and governors, the relevant directorates-general of the European Commission, and the ECB. In some cases, Members would need to follow their national parliamentary procedures. The ESM also would have to conduct a full analysis of the bank to assess the likelihood of recovering its investment.
Project Carlo, the first test exercise, was based on a real bank in one of the programme countries, but with the data changed for the purposes of a purely hypothetical exercise. Under the simulation, the bank’s home country requested the instrument’s aid to recapitalise one of its big banks. The ESM team had two and a half days to analyse the bank’s financial situation, come up with a workable investment structure, and perform due diligence: stress tests, entry equity valuations, exit routes, and potential exit valuations. To make things even more interesting, the exercise facilitators changed some of the external events halfway through, in keeping with how the crisis had played out in real life.
Instead of granting the requested amount of aid for the troubled bank, the ESM team found it needed to split the bank and provide a large amount of funding, most likely in the form of a regular loan to the country. This led to ‘a very small equity investment for direct recapitalisation and a very high probability that the country was going to have to request a full economic adjustment programme,’ said Hesketh of the ESM banking department. Since the direct recapitalisation instrument was designed to help a country in lieu of a standard programme, the realisation that it would work only alongside a full programme was a surprise.
‘We all know it would not have been just one bank that needed to be resolved, but probably would result from an overall situation that would have affected the state itself,’ said Jansen, former ESM general counsel.
Project Hugo followed in September 2014. It too featured a simulated bank based on real programme country data and a straightforward request for direct aid, but this time with the Commission taking part and other simulated external actors, such as the media. The ECB was invited, but it was too busy conducting its real-life comprehensive banking review to take part.
Bringing in these outside actors highlighted how direct bank investments would dramatically change the ESM’s negotiating role, over and above the political difficulties of getting a direct recapitalisation programme in place. The acquisition of a stake in a private company would compel the ESM to protect its investment and negotiate for higher returns on behalf of its shareholders. This might mean navigating trade-offs between what is best for the bank and what regulators might request as part of their efforts to limit taxpayer liability. One example might be whether or not to sell subsidiaries, which might have long-term value to the institution but could also generate upfront cash.
Project Hugo led to the same conclusion as its predecessor: even though the request was for one specific bank, there would be too much contagion for the country to avoid a full macroeconomic programme. The bulk of the programme would probably entail an indirect recapitalisation facility. Direct aid would be a smaller component, at a higher cost.
‘The conditions that we would impose for direct recap are very burdensome on the Member,’ Hesketh said. ‘Essentially, they lose control of a systemically important bank in their country. We make a small equity investment but we’re probably taking 70% to 80% of the shares.’
In that scenario, a Member would probably opt not to pursue a direct aid investment. Instead it could aim for a larger indirect facility and maintain control of its banks.