ESM Board of Directors approves €1 billion disbursement to Greece 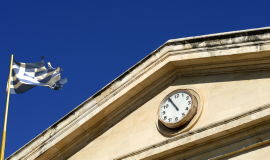 Luxembourg – The Board of Directors of the European Stability Mechanism (ESM) today authorised the disbursement of €1 billion to Greece. This disbursement, which follows the Greek government’s completion of the second set of reform milestones, will be used by the government for debt service, budget financing, and co-financing projects funded by EU structural funds.

ESM Managing Director Klaus Regling said: “With the disbursement of €1 billion, the ESM is supporting the Greek government in its reform process. The reforms cover a wide array of policy fields that are important to modernise the Greek economy. Notable examples include measures to stimulate competition in the energy sector, which should bring down prices, as well as a new law to help banks manage their exposure to non-performing assets, which will free liquidity and boost economic activity.

Mr Regling added: “I hope the good cooperation with our Greek partners will continue, so that the first review of the ESM programme can be completed in early 2016. Only a successful conclusion of this review can lead to discussions on further debt relief for Greece, as the Eurogroup has said before.”

The €1 billion will be the third and final disbursement of the initial loan sub-tranche of €16 billion agreed in August 2015. The ESM has also disbursed €5.4 billion to Greece for bank recapitalisation. Following the disbursement approved today, the total amount of ESM financial assistance for Greece will thus reach €21.4 billion, which is around 25% of the initial programme volume of up to €86 billion approved by the ESM Board of Governors on 19 August 2015.