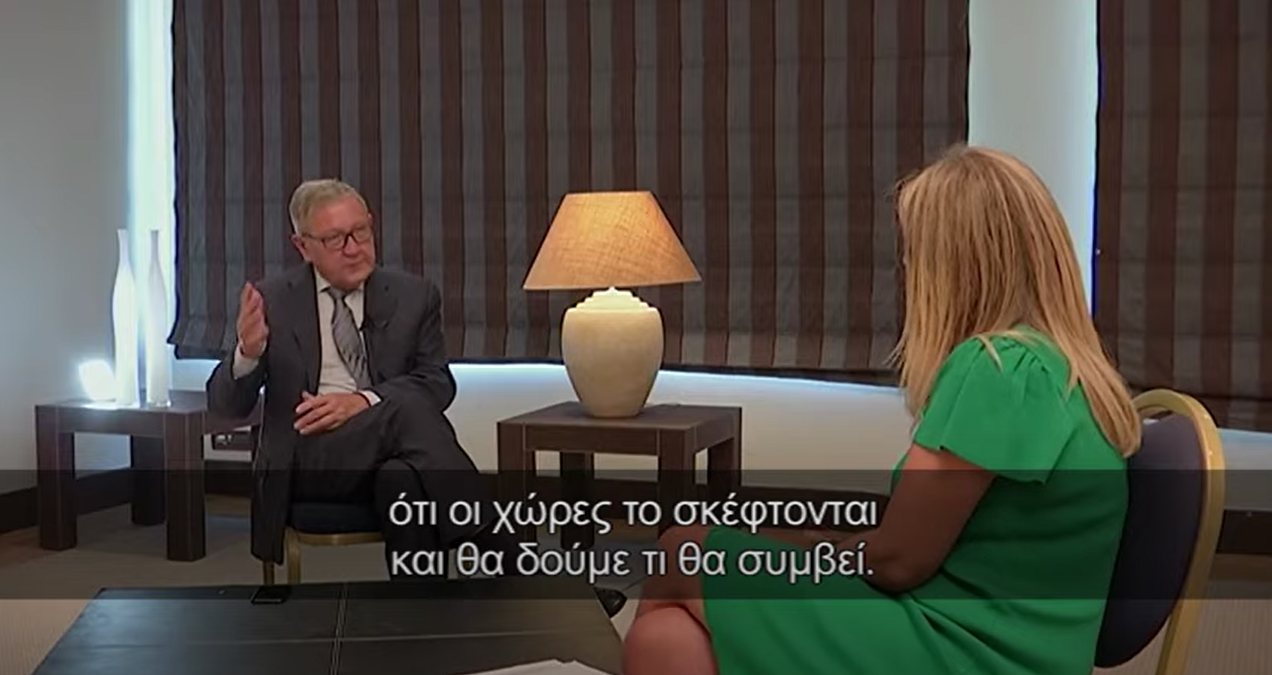 ERT TV: Due to the pandemic crisis, Greece does not need to achieve the primary surplus of 3.5% in 2020. Also, it seems that in 2021 all the countries will have the same freedom. Is it possible to have some fiscal targets for Greece because of the fact that the country is under enhanced surveillance?

Klaus Regling: For this year, and very likely also next year, there was a general decision by the euro finance ministers to lift the 3% ceiling. This applies to all countries, including Greece, because we were all hit by the same problem. The pandemic was a symmetric shock for all countries, and in such a situation, the Stability and Growth Pact always has an escape clause, so it’s nothing that special. The escape clause was also used after the global financial crisis in 2008-09. Now it was necessary; it was absolutely unavoidable to use it again. And therefore, Greece of course is allowed to run a deficit in its primary balance. We estimate it at 6% of GDP this year, instead of a 3.5% surplus. So, a very sizeable fiscal reaction to the pandemic, which is economically just the right thing to do. Next year, the preliminary plan calls for a balance in the primary balance, so that would be an improvement compared to this year. In the subsequent years, it’s too early to say what will happen, because there is still uncertainty about the pandemic itself - will there be a second wave, will there hopefully be no national or regional lockdowns that you find in some other European countries. But in the longer term, obviously, one has to find the right balance between supporting the economy, but also being very careful preserving debt sustainability.

Greek finance minister Christos Staikouras didn’t rule out the possibility to have fiscal flexibility also in 2022. Given the fact that economic performance in the euro area will not return to pre-crisis levels until the end of 2022, what does such a decision mean for Greece, given the fact that enhanced surveillance ends in the middle of 2022?

For 2021, next year, I think there will be an agreement to have flexibility, because there will be a big output gap, as economists say, so we will not be back to the pre-crisis level. 2022 we have not discussed yet with the Greek government. The European institutions have not done that; I think it’s too early to do it. We have to wait first and see how economic developments will be, and that depends very much also on the health situation – whether the virus spreads again more than we hope, if there is a second wave, how quickly a vaccine can be available. So I think it’s too early to think about 2022, but it’s correct that all the governments in our member states do now prepare the 2021 budget. So that is the focus now.

How possible do you think it is to have an extension of the enhanced surveillance beyond 2022?

Again, all that is unclear; maybe yes, maybe no, I cannot answer that today.

When would be a good time to return to fiscal discipline? Do you think the fiscal rules should be revised and adapted to the new reality?

Of course, all countries must return to fiscal sustainability as soon as possible, but when that’s possible depends very much on economic developments, which depend in turn on what happens with the Covid-19 pandemic. But it is important to return to fiscal sustainability, because otherwise there could be longer-term problems. This is not a Greek issue, it applies to all countries. They all face the situation that they have to increase public debt significantly during this period. In all European countries, public debt will go up by 20-30 percentage points of GDP. That is a serious deterioration, so we have to look at how to deal with that afterwards. At the same time, we have a debate about reforming the Stability and Growth Pact. It has become quite complex, and that has led to less credibility. This is also a debate that we will have next year – to make the SGP easier to manage. The outcome is open, because it’s difficult, the questions we have to deal with are technically complex. But I think this discussion will take place based on proposals that the European Commission will present at the end of this year.

Because of the pandemic, all countries will see an increase in their public debt. How much will this affect the sustainability of Greece’s debt, and will there be a new debt sustainability analysis (DSA), probably under new criteria?

There will of course be a new DSA because we do that on a regular basis. When I say we, I mean the European institutions - the European Commission, the ECB and the ESM. We do that at least once a year, so I expect that we will have a new one at the end of this year. But there will be no new criteria because debt sustainability doesn’t need criteria, it needs assessments about how debt service develops over time, and whether there are problems with the financing needs of the country. So again, a general issue, not only for Greece. This is independent from the reform of the Stability and Growth Pact that I talked about. So we will do the DSA. Higher debt levels of course make it more difficult to reach debt sustainability. However, not everything is negative; we do also have positive elements, which will flow into the new DSA.

Higher debt is negative, but lower interest rates are positive. And it will be very crucial then to see how growth will develop once we are out of this current crisis. We had a big drop in GDP, but then it will bounce back next year. We will see how strong will the bounce-back be, and importantly, I hope that the money that will be made available by the European institutions – the Commission, the EIB, possibly also the ESM – that this money will be used to support reforms and investment, which could then lead to higher a growth path. That is another crucial element when we do a DSA. All that needs to be put together; we will have better data at the end of the year to do that. And then we will see what the situation is.

Why do you think no country has applied for the ESM’s Pandemic Crisis Support? Which country do you think could be the first to apply?

The Pandemic Crisis Support is the facility that the ESM has made available after decisions by finance ministers – that the Commission will provide the SURE unemployment programme, the EIB will provide a guarantee facility, and from the ESM there is the Pandemic Crisis Support. No country has requested it, but that’s not worrying because it is available until the end of 2022. It is based on the idea of a precautionary arrangement. So the fact that this facility is available has already had a positive impact on markets. And I’m talking about European countries, not only Greece. So it has a positive impact, and whether it is actually used or not is not really that important. But it would be available; no country has requested it. We know that several countries are thinking about it because for many, it is financially attractive. We could provide to Greece, for example, €3.7 billion at slightly negative interest rates, so that is attractive, also for other countries. Every country can draw up to 2% of its GDP. We know that countries are thinking about it and so we will see what happens.

If one country takes the first step, do you think others will follow?

That’s possible, I don’t know. But, in that context, let me make it very clear that there is no market stigma, no negative market stigma associated with our new facility, the Pandemic Crisis Support. Markets understand very well that this money comes basically for free, so it will actually be credit-positive, as the experts say, in the sense that it will reduce the debt servicing costs of the country and that’s very positive for other creditors. So, no market stigma - I talk about this around the world; market people are very clear on that. So that would not be a reason not to take it. I’m very relaxed; we’ll see what happens. It’s positive that it already exists, it’s already had a positive impact on markets. Now it’s up to the countries to decide what to do. The other advantage is that the money is available immediately, while the bigger amounts of money that will come out of the Commission’s Next Generation EU programme will only flow from the middle of next year. So there are different advantages that countries can think about.

Regarding the Recovery and Resilience Facility (RRF), do you think there will be additional payments apart from the 10% that countries can take in 2021?