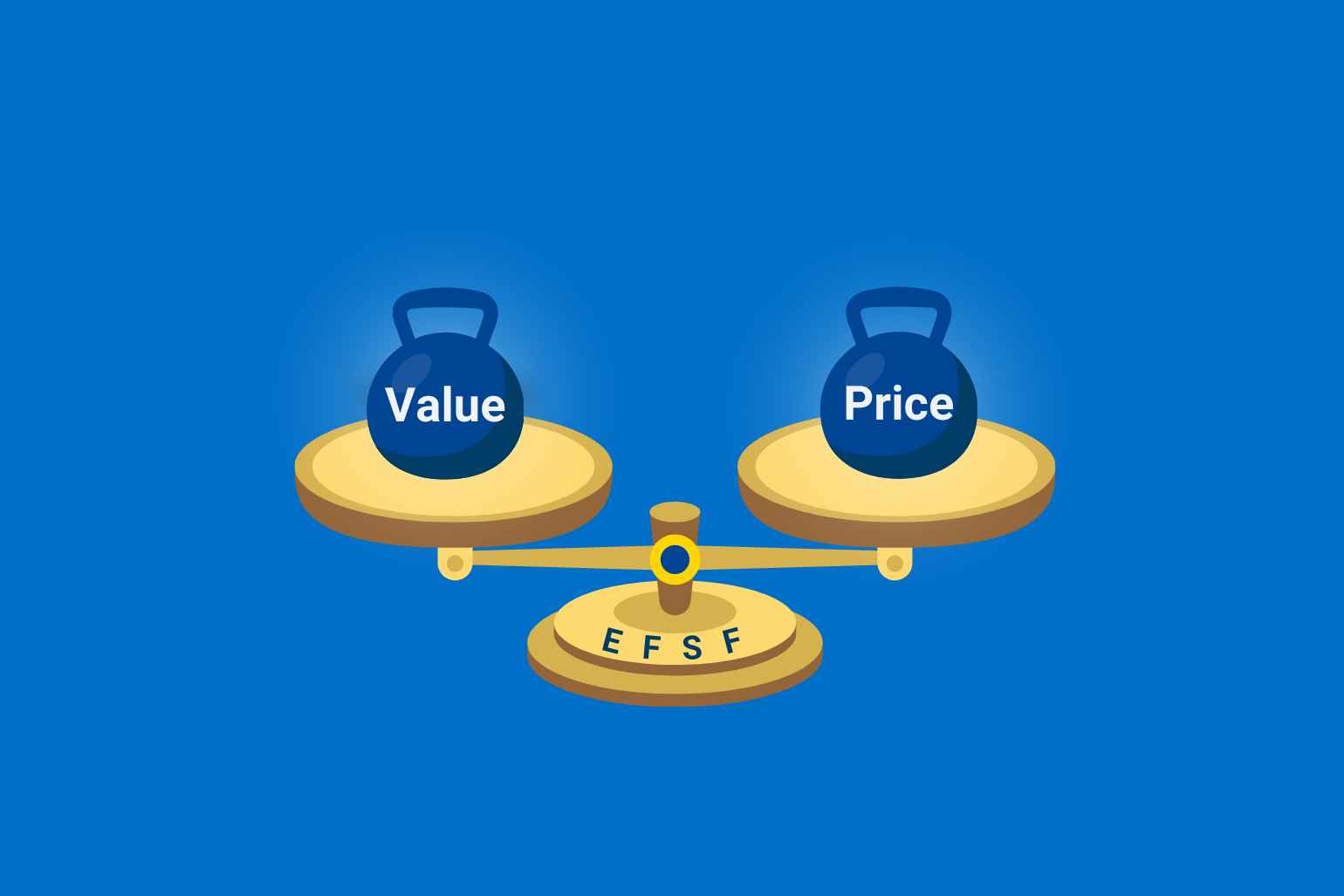 The ESM’s temporary predecessor, the European Financial Stability Facility (EFSF), continues to issue around €20 billion every year and is one of the biggest supranational issuers in the Economic and Monetary Union. Central banks around the world who buy public debt issues mark-up the price of bonds such as those from supranational issuers like the EFSF. This has led us to ask if it is time to rethink how we value these bonds and suggest a model for this exercise, something we explore in further detail in our recently published Working Paper where we presented a new interest rate term structure model.

Such a model can help investors anticipate the price dynamics in the bond market – especially in anticipation of a crisis and its aftermath.

Since the inception of the ESM as a permanent successor, the EFSF no longer lends to euro area countries. But it continues to issue as part of its roll-over of existing loans made to some euro area countries during the financial crisis a decade ago, some of which will continue to be repaid until 2070.

Loans from the EFSF and ESM played a crucial role in addressing the euro area debt crisis by providing finance when countries faced the risk of losing market access. But the crisis was overcome with the help of vital liquidity provided by the Eurosystem, which is composed of the European Central Bank (ECB) and national central banks of the euro area.

In recent years, the ECB took a major role in helping counter other crises such as the pandemic. Its actions, including bond asset purchases, have also affected the price of EFSF bonds and how the capital market functions. This activity is commonly called ‘quantitative easing’.

Last June, the ECB explained[1] that while it would cease net asset purchases under its Asset Purchase Programme on 1 July 2022, it intended to continue reinvesting the principal payments from maturing securities purchased under the programme.

Furthermore, the ECB explained that under its other tool, the Pandemic Emergency Purchase Programme (PEPP), it also intended to reinvest the principal payments from maturing securities purchased under the programme until at least the end of 2024.

So, even though the pace of central bank net asset purchases due to reinvestments may slow, the market is left with the price effects of reversing those purchases, called ‘quantitative tightening’.

At one time, some central banks bought sovereign-issued bonds for market smoothing purposes only to effectively facilitate the orderly introduction of those bonds into the market. But with the significant purchases that have followed emergencies such as the euro area debt crisis and the Covid-19 pandemic, their actions have changed the dynamics of how the market prices bonds.

Central banks can buy bonds in large quantities and this lowers the bond yield. Bond prices and yields are inversely related because there are fewer bonds changing hands in the market. This means the liquidity premium in the price of a bond gets larger in times of crisis as the bonds become scarcer and more coveted. By holding large amounts of outstanding bonds, the so-called “free float” of bonds is reduced.

Therefore, we need a new way to value bonds such as those of the EFSF.

Using observable and publicly-available market data, we developed a term structure model of interest rates based on Joslin et al.[2] Using this model, we estimated the EFSF bond yields and broke them down into term premium and expectations using the swap curve as a liquid market benchmark.

We used a liquidity measure linked to central banks’ reserve management to demonstrate that liquidity is the main driver of bond pricing.

With our model, investors can now price bonds and infer the expected cost of carry of their positions – which is the profit or loss from holding a short or long bond position and financing or reinvesting the cash proceeds in the money market. They can also estimate risk premia to assess relative value in the yield curve. Meanwhile, issuers can determine their standing as a provider of safe assets. These are assets deemed to bear the lowest amount of risk in the market and command the highest or near-highest credit ratings.

Overall, three factors explain the dynamics of the swap rate and EFSF bond yields: the first two are the traditional level and slope of the yield curve,[3] which are common to EFSF and swap curves, and the third factor is specific to EFSF bonds.

In a comparative study based on German and French government bond yields, we find that the third factor moves largely with excess liquidity for Germany and the EFSF. The chart below illustrates the decomposition of the 10-year EFSF yield by model assumption into term premium, expectations of the future ECB short rate, and the liquidity component picked up by the third factor and estimated from the swap spread. We also plot ECB excess liquidity (right-hand axis). 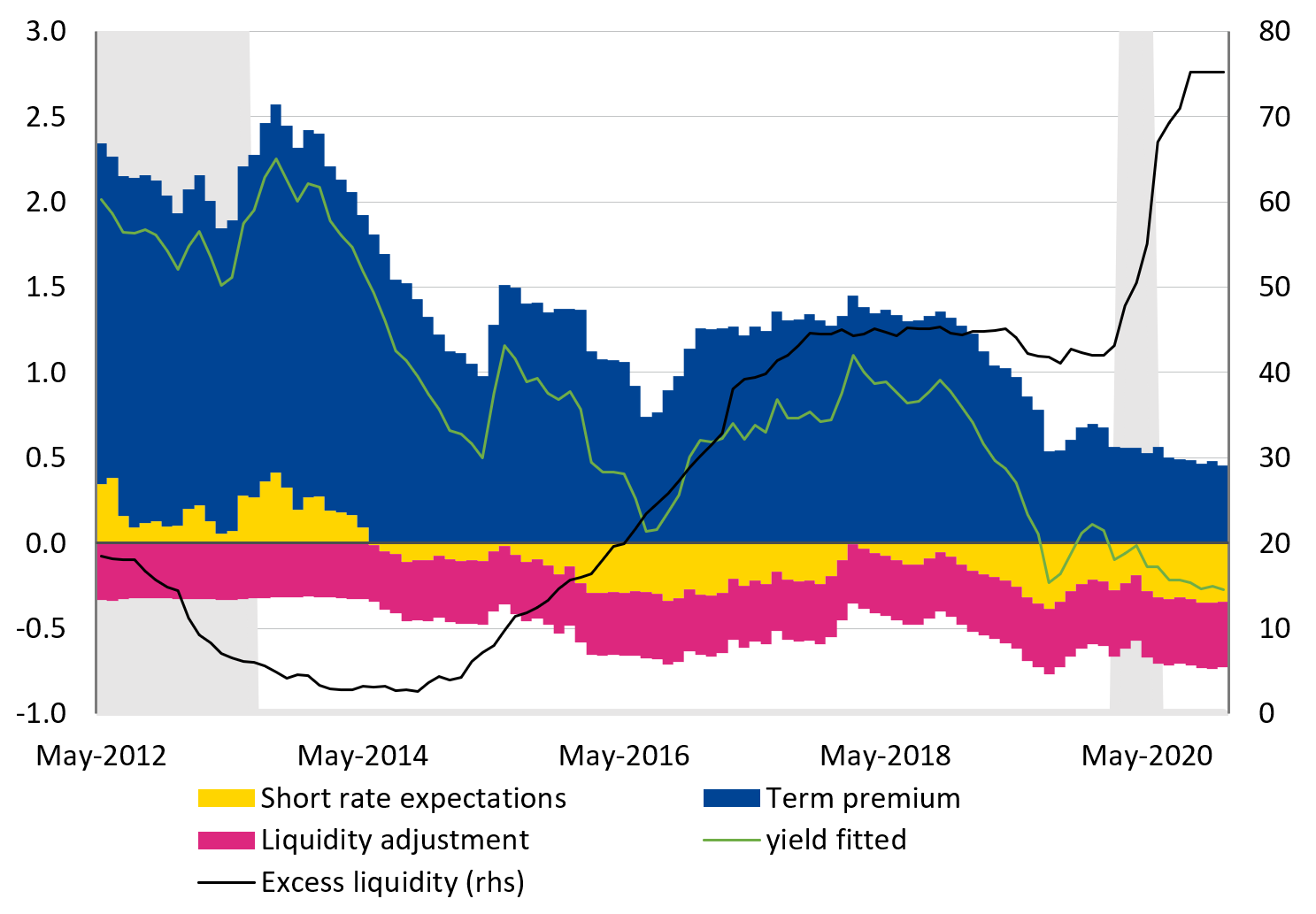 Note: 10-year EFSF yield decomposition is estimated from the joint model with swaps, based on Joslin et al., (2009). The yield observed is decomposed into expectations of the future short rate + term premium + liquidity adjustment. The liquidity adjustment is linked to the swap spread. The grey area reflects recession period in the euro area. The sample period for estimation: April 2000–December 2020. Excess liquidity in the chart is the moving average of ECB excess liquidity, cumulatively in 1 year.

In general, we can show that bond-buying that boosted excess liquidity in the euro system tended to lower EFSF bond yields and drive up bond prices. In the absence of the current ECB excess liquidity position, EFSF bond yields could have been 40 basis points higher. In a liquidity crisis, it could be that, as a safety premium, more than 40 basis points would build up for holding bonds that convert easily into cash.

EFSF bonds display the same characteristics of safe assets as German Bunds. German government bonds therefore displayed a similar reaction. The term premium reacted to the increase in excess liquidity by flattening the yield curve with a trough in 2020 when the ECB introduced its PEPP.

The expected short rate was therefore negative throughout the sample period.

These findings explain how the bonds issued by the EFSF, which have euro safe asset status, could have a role in stabilising bond markets in a crisis when liquidity can be a major driver of yields. Our new interest rates term structure model can help investors anticipate the price dynamics in the bond market, especially ahead of a crisis and in its aftermath, and improve fair value pricing of bonds. The model could allow investors to estimate a safe asset premium and identify a liquid bond benchmark. Finally, it could help investors manage the cost of carry positions, helping them make profitable decisions, especially in light of the recent monetary policy changes.

The authors would like to thank Niels Hansen, Rolf Strauch, Raquel Calero, George Matlock, and Mariia Penina who contributed to this blog post.