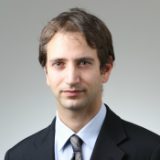 Function/Position
Economist, Economic and Market Analysis
Lorenzo Ricci is an Economist at the European Stability Mechanism. He holds a Ph.D. in Quantitative Economics from the Université libre de Bruxelles. Lorenzo has also spent time at the International Labour Organization and the Bank of Italy. His current research focuses on macroeconomics policy and  applied time series econometrics. He has published his research output in international peer-reviewed journals, including the Journal of Economic Behavior and Organization and the International Journal of Central Banking.