Pandemic crisis as a catalyst for a common European safe asset

The European Union will soon join the European Stability Mechanism (ESM)/European Financial Stability Facility (EFSF) and the European Investment Bank (EIB) as a major issuer of common European safe assets – low-risk highly liquid assets. After years of academic discussions, it took an unprecedented health and economic crisis for European countries to agree to such large-scale common issuance. In this blog post, we argue that this increased European safe asset issuance will bring benefits to the European economy beyond the direct benefits of financing economic recovery by, for instance, enhancing financial stability, improving the monetary policy transmission, and contributing to the international role of the euro. Luckily, the euro area can reap these benefits through existing supranational institutions such as the ESM, already at work fulfilling this role.

For years, many have argued in academic circles that Europe and, in particular, the euro area, would benefit from the increased size of a common European safe asset, similar to the highly rated bills and bonds that sovereigns and supranational institutions like the ESM/EFSF, EIB, and the EU are already issuing. Until recently, no policy initiative seemed sufficiently mature to result in an agreement that would substantially increase the volume of European safe assets. The pandemic response is changing matters, and the rise in issuance will help to bolster European integration and the European economy in ways well beyond its intended purpose.

First, it will support financial stability by providing an opportunity for European banks to substitute their holdings of national government bonds and bills with the European safe asset. Such diversification will help reduce the spillover of risks between the sovereign and the banking sector, known as the bank-sovereign nexus. Sufficient holdings of such safe assets will also reduce the possibility of destabilising flights-to-safety by investors during crises.

Second, a large pool of European safe assets will improve the transmission of the common monetary policy in the euro area and the functioning of the key short-term financing, or repo markets, making them less fragmented. Using the common safe asset as high-quality liquid collateral and store of value will also facilitate cross-border financial activity.

Fourth, more integrated markets will in turn support private sector risk-sharing via cross-border banking and investment, thus contributing to better macroeconomic stabilisation. This is especially important for the euro area, where countries have at their disposal fewer stabilisation tools than the rest of EU Members.

Finally, a deeper and more liquid market of common European safe assets would contribute significantly to the international role of the euro. Currently, the outstanding volumes and new issuance of highly rated euro-denominated bonds are much smaller than those of dollar-denominated bonds (see Figures 1 and 2). The new issuance of common European safe assets will reduce the scarcity of euro-denominated safe assets and create a deeper and more liquid market, which will be more attractive to international investors.

Figure 1 and 2: Volumes (left) and new issuance (right) of public sector and supranational euro-denominated bonds rated AA+ or higher is still small in comparison to dollar-denominated ones 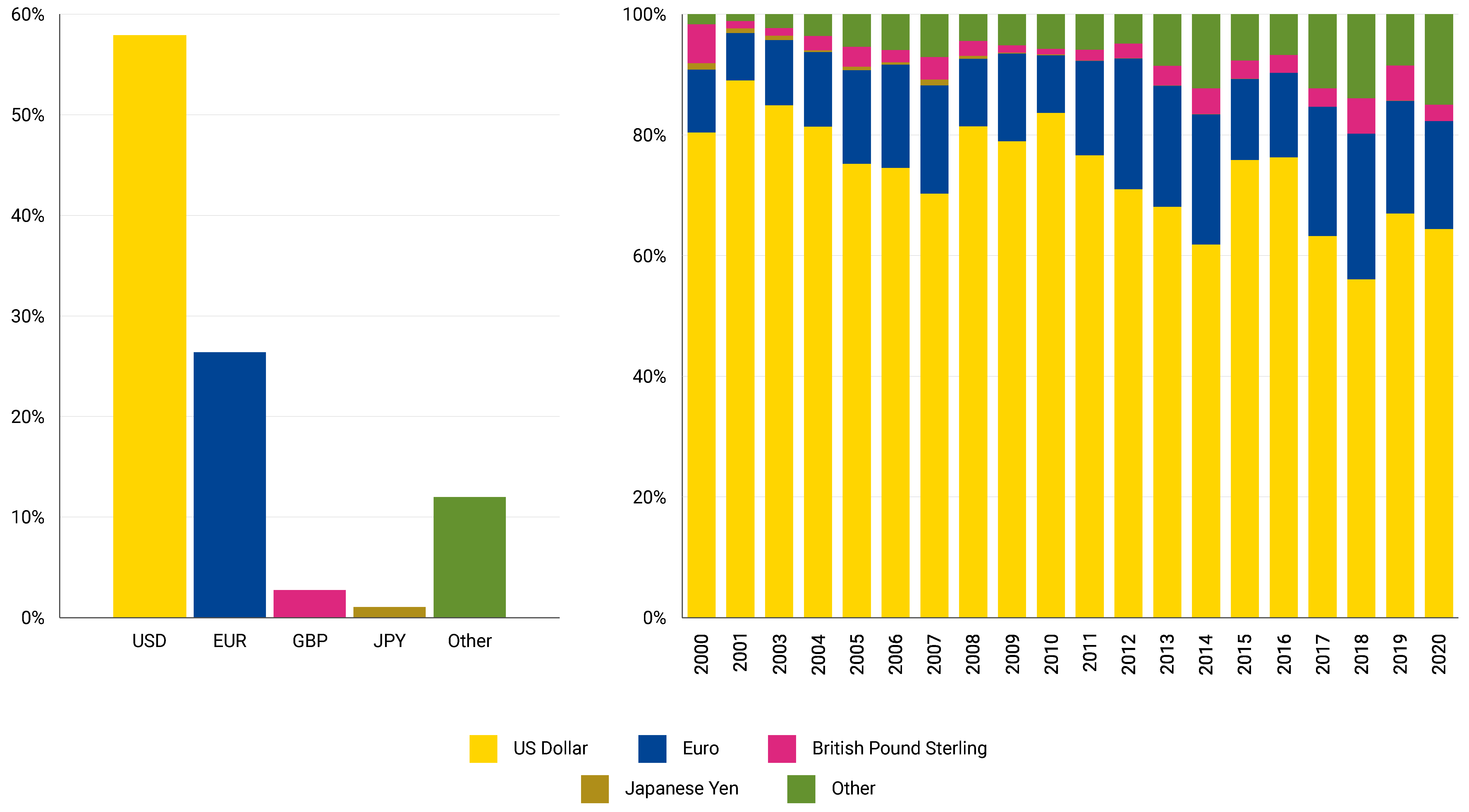 Note: Including supranationals’, government and agency debt with issuer ratings AA+ or above by at least one of the three rating agencies. Other refers to any other currency than specified. Left chart refers to mid-October 2020. In the right chart, the last column refers to 2020 year-to-date.
Source: Dealogic.

A decade worth of proposals

Before Covid-19, academics and policy-makers made a string of proposals, ranging from simple bonds to more complex structured financial products. These include Eurobonds and Eurobills, Red-Blue bonds, Purple bonds, Sovereign Bond-Backed Securities (SBBS) and E-bonds.

One of the main goals of more recent discussions was to find a model that would deliver a common European asset with as little mutualisation of risks among participating member states as possible. One such proposal was the SBBS proposal. A thorough analysis by a dedicated working group led by the European Systemic Risk Board, however, showed that the SBBS would be difficult to implement.[1] Other proposals were discussed since then, most notably E-bonds, but none of these proposals were taken up.

A number of euro area countries called for “coronabonds”, a common debt instrument to provide financial support to EU Member States during the pandemic crisis and the recovery phase. The discussion understandably focused on how to finance the needs arising from the crisis, rather than on the benefits, a larger pool of common European safe assets could bring. As a result, of these discussions, we now have two agreements among the EU Heads of State or Government, which will potentially lead to a large increase in the volume of European safe assets.

First, in April, European finance ministers agreed on an initial package of financing instruments, worth €540 billion. It provides three safety nets that each have a different purpose: the European Commission SURE instrument supports workers; the EIB, businesses; and the ESM, sovereigns.

Second, leaders reached agreement on a recovery package called “Next Generation EU” during their first return to in-person meetings at the EU Summit in July. The financing of this package will lead the EU to issue an additional €750 billion of highly rated assets from 2021 to 2026.

The biggest novelty of the recovery package is that for the first time, the EU will borrow to finance budgetary expenditures. This is a simpler way to create safe assets than former proposals. It implies that the EU will finance budget expenditures by issuing bills and bonds, backed by all EU Member States implicitly through an increase in the own resource limit and future contributions to the budget, including new own resources. This is very similar to how the governments themselves borrow. Table 1 compares the EU recovery bonds with SBBS and E-bond proposals.

Note: *The strength of effects depends on the size of the issuance. Source: Compiled by authors.

These agreements will make the EU the biggest supranational bond issuer on the block. Currently, the EU has about €50 billion in outstanding debt – compared to the ESM/EFSF’s €311 billion and the EIB’s €438 billion – and will need to issue an additional €850 billion to finance the two newly agreed recovery instrument packages (“Next Generation EU” and SURE).

If the full amounts available under the new programmes are disbursed, this will significantly increase the pool of common European safe assets. The new EU issuance, the EIB financing of their support to businesses, and ESM Pandemic Crisis Support, together with the existing supranational debt could result in around €2 trillion – or 17 % of euro area gross domestic product (GDP) – of common euro-denominated safe assets. Adding also the sovereign debt of highly-rated euro area countries, euro safe assets would then amount to around 40% of the GDP of all euro area countries, with the comparable US ratio at 90%. Importantly, the existing supranational financing infrastructure can handle the issuance; there is no need to build up a costly, extensive, and time-consuming new architecture.

While we can consider the total future issuance of EU, EIB, and ESM/EFSF together when discussing the benefits of a bigger pool of common European safe assets, a combined pool will not result in a single benchmark yield curve that could be used to price other assets. This is due to the heterogeneity among the European issuers, including the difference between whether they are backed by the entire EU or by the euro area countries only. The EU yield curve alone is also unlikely to become the benchmark yield curve, at least as long as Next Generation EU and SURE instruments remain temporary. Even including the new issuance, the EU outstanding issuance will still be relatively small compared to the current de facto European low-risk benchmark, the German Bund.

In the wake of the pandemic crisis, Europe has used its existing advanced supranational financing infrastructure to support the post-pandemic recovery. These European initiatives – which come on top of significant national measures in every EU Member State – will bring benefits beyond supporting recovery, notably they will lead to an increase in the pool of common highly-rated safe assets. Moreover, the recovery package will be carried out in a manner comparable to debt-financing of a common budget, which represents a significant step for European integration.

SBBS would be created through securitisation techniques and would comprise a safe senior and risky junior tranche. They would require an unprecedented level of coordination between the SBBS issuer and the national sovereign debt issuers, and there might not be enough demand for the junior tranche, especially in more turbulent times. This would in turn also limit the issuance of the senior tranche, the European safe asset.