Cold winter ahead? Implications from a Russian gas cut-off for the euro area 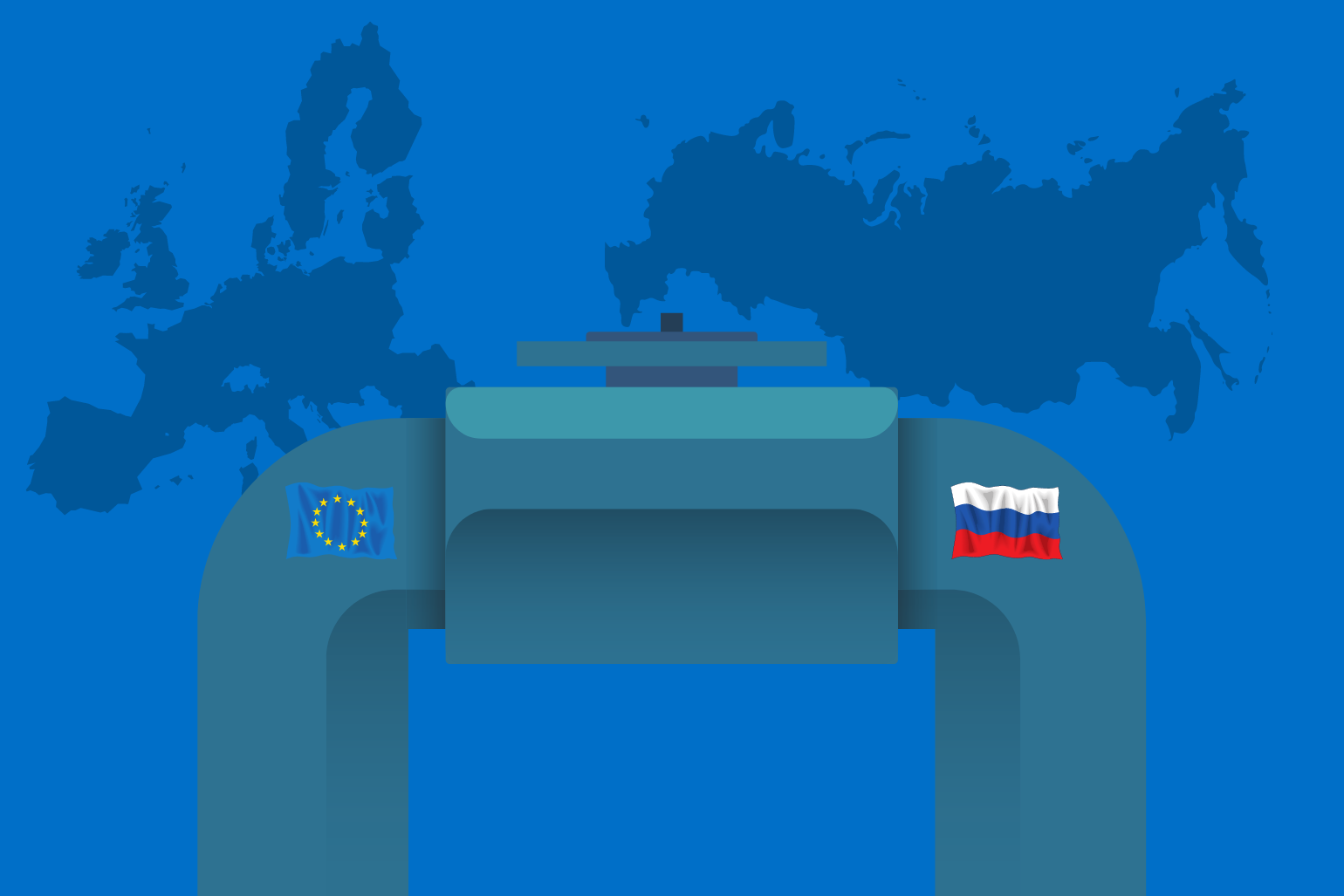 Impairments to gas flows from Russia to Europe are currently widely discussed. A persistent lack of available gas could have severe impacts on households and firms. We quantify the impact of a sudden reduction in gas supply from Russia by considering current and past energy dependencies as well as the consequences from energy savings. We argue that a full cut-off from Russian gas would cause gas rationing in early-2023, triggering a recession in the euro area; the reduction in imports of energy from Russia has already helped to cushion consequences from rationing; energy savings as envisaged by the European Council can help to largely avoid further rationing in the winter, but only if overall gas consumption of households and firms can be reduced; and concerted action among EU members will help mitigate adverse effects of a cut-off of Russian gas.

As the war in Ukraine continues, gas flows from Russia have been partially reduced or even fully stopped in some European countries. The temporary closure of the Nord Stream 1 pipeline from Russia to Germany in early-July for maintenance exacerbated the risk of longer-term delivery impairment for the euro area. Two of the largest euro area economies, Germany, and Italy, remain the most vulnerable.

Gas inflows in the summer are mainly used to replenish reserves, crucial to cover the higher gas demand during the winter. Should gas demand exceed the sum of gas inflows from abroad and domestic gas production at a point in time when reserves have been exhausted, a rationing of gas will be unavoidable. In such a case, the EU has an action plan in place to prioritise household consumption (for electricity production, heating, or other necessary purposes).[1] This would imply a (partial or even full) shutdown of energy-intensive sectors’ production, adversely affecting employment and counteracting the post-pandemic rebound in labour markets.

Gas rationing would cause a recession in the euro area

To assess the possible growth impairment of gas rationing, we quantify the impact of a sudden reduction in gas supply from Russia. Based on a standard economic approach, our analysis shows that a full cut-off from Russian gas supply as of August 2022 would exhaust gas reserves by end-2022.[2] Some countries will be hit more severely than others, in particular Austria, Belgium, Germany, and Italy. Rationing of gas used by firms would therefore be required at the beginning of 2023, causing gas consumption in Germany, for example, to fall about 40% below the level expected without rationing.[3]

Energy intensive sectors would have to scale down production, thereby reducing euro area GDP by 1.7% below the benchmark case (reflecting no inflow constraints), eventually leading to higher unemployment.[4] [5] Two of the largest economies in the euro area would be hit strongly: GDP in Germany and Italy would fall by about 2.5% below benchmark in 2023. In some countries gas rationing is not expected to happen. However, these countries would nevertheless be adversely affected via trade relationships, like supply chains. France and Spain, for example, have a different energy mix and/or a lower reliance on Russian imports, so would be indirectly affected.

Figure 1: Output losses from rationing in 2023

(% change from no gas impairment case)

Notes: The figure shows the output losses of a Russian gas import stop and consequent rationing of gas by most energy-intensive sectors for the largest euro area economies and euro area aggregate. The output losses are shown as percentage deviation from a baseline with no gas impairment. The assumed Russian gas dependency is the one observed today.

Some countries have partially diverted their gas purchases to non-Russian sources. The euro area’s gas dependence on Russia has therefore fallen in the first months of 2022 compared with previous years. As less gas inflows are exposed to the cut-off risk, potential consequences have already been reduced by these efforts, although gas rationing might not be entirely avoided.

With last year’s degree of gas dependence, euro area GDP would fall by 2.6% below the case of no impairments, which is one percentage point more than with today’s degree of dependence on Russian gas. Gas rationing would be therefore more severe and would happen by up to two months earlier in Germany and Italy. Hence, the reduction in gas dependence from Russia has improved the euro area’s resilience by already saving future GDP losses in case of a gas import stop.

The European Commission encourages countries to reduce gas demand by 15% between 1 August 2022 and 31 March 2023.[6] In the industrial sector, this could take the form of replacing gas with other energy sources where possible. For households and public administrations or owners of public buildings, this would mainly imply reducing gas use for heating purposes. A reduction in gas consumption could help to keep the energy intensive sectors operational as it implies a reallocation of available gas reserves. Rationing would become less severe, and firms would need to scale down their production by less, thereby stabilising employment.

According to our analysis, a persistent reduction of gas demand by 15% for households would dampen the fall in GDP – but rationing is not unavoidable in all countries.[7] In 2023, euro area GDP would be 1.1% below the case without inflow constraints. However, if total gas consumption (households and firms) can be reduced by 15%, gas rationing could be largely avoided without incurring large output losses.[8]

(% change from no gas impairment case and contribution in percentage points)

Notes: The figure shows the output losses of a Russian gas import stop and consequent rationing of gas by most energy-intensive sectors for euro area aggregate. The overall output losses are shown as percentage deviation from a baseline with no gas impairment. The euro area countries’ contributions are in percentage points. The far-right bar assumes households save 15% of their total gas consumption.

A full gas import stop from Russia may well be very likely, making gas a scarce resource in the forthcoming winter. Consequently, either production will have to be scaled down, causing unemployment to rise, or persistent gas savings will be needed to help mitigate the impact on manufacturing industry once a gas import stop happens.

Effective use of Europe-wide gas reserves in solidarity among EU Member States could be another tool to cushion the blow from a gas shortage, leveraging on countries that have not exhausted their reserves to aid those in need.

The authors would like to thank Niels Bünemann, Raquel Calero, Pilar Castrillo, Veronica Gottardo, Niels Hansen, and Rolf Strauch for valuable comments and contributions to this blog post.

[1] Regulation (EU) 2017/1938 of the European Parliament and of the Council of 25 October 2017 concerning measures to safeguard the security of gas supply and repealing Regulation (EU) No 994/2010. See https://eur-lex.europa.eu/legal-content/EN/TXT/HTML/?uri=CELEX:32017R1938&from=de, retrieved 25/07/2022.
[2] The analysis is based on hypothetical extractions method, using 2021 OECD Inter-Country Input-Output (ICIO) tables. This is a standard approach used to estimate the impact of a hypothetical loss of interlinkages of a sector with the rest of the economy. See Dietzenbacher, E., van Burken, B., and Y. Kondo (2019). ‘Hypothetical extractions from a global perspective’. Economic Systems Research, 31(4), 505-519. This approach has been also used by Deutsche Bundesbank (April 2022 monthly bulletin) and by the European Commission (Autumn 2021 forecast). The concrete assumptions and further details are available upon request.
[3] During summer 2023 gas reserves might still be exhausted in some countries or only slowly replenished in other countries with further reduced inflows. While summer gas consumption could be partly satisfied by inflows and domestic production, rationing would be needed in end-2023 more broadly once again due to insufficiently replenished reserves gas.
[4] These sectors are identified considering both direct sourcing and indirect use of other sectors’ inputs, calculated using OECD ICIO 2021 tables, as done in European Central Bank Economic Bulletin, Issue 1/2022.
[5] This is in the ballpark of other studies, i.e., by European Central Bank (June 2022 macroeconomic projections), European Commission (Spring 2022 forecast), or De Bella et al. (2022) and Deutsche Bundesbank (June 2022 monthly report) for Germany. We focus on the pure effect from rationing without considering other channels via higher energy prices or elevated uncertainty. The latter would amplify the effects from pure rationing and give rise to a stronger shortfall in economic activity. For a summary of studies, see. De Bella, G., Flanagan, M., Foda, K., Maslova, S., Pienkowski, A., Stuermer, M. and F. Toscani (2022), Natural Gas in Europe, The Potential Impact of Disruptions to Supply, International Monetary Fund Working Paper, WP/22/145, and the references therein. The results are in general sensitive to the assumptions.
[6] European Commission, “Save Gas for a Safe Winter: Commission proposes gas demand reduction plan to prepare EU for supply cuts” https://ec.europa.eu/commission/presscorner/detail/en/IP_22_4608, 20/07/2022.
[7] We do not consider a sharing of available gas reserves across countries at this stage.
[8] In our calculations, we discarded the ambitions of countries to increase imports of liquified natural gas. See for a discussion on the role of liquified natural gas: Albrizio, S., Bluedorn, J., Koch, C., Pescatori, A., and M. Stuermer (2022), Market Size and Supply Disruptions: Sharing the Pain from a Potential Russian Gas Shut-off to the European Union. International Monetary Fund Working Paper, WP/22/143.
[9] See European Commission (2022), “REPowerEU: affordable, secure and sustainable energy for Europe” https://ec.europa.eu/info/strategy/priorities-2019-2024/european-green-deal/repowereu-affordable-secure-and-sustainable-energy-europe_en, retrieved 25/07/2022.