How do we want the European banking sector to look in 10 years? - speech by Rolf Strauch

Rolf Strauch, ESM Chief Economist
“How do we want the European banking sector to look in 10 years?”

It is a pleasure for me to open this conference. Thank you to the organisers at the European Banking Institute (EBI). You have put together a brilliant programme, tapping the main fields of research on regulation.

Being surrounded by leading scholars and researchers on banking regulation across Europe and beyond, makes me hopeful that our discussions will inspire further improvements in this field.

Therefore, I would like to invite you to reflect on some topics that are currently at the heart of the European policy debate on banking.

How do we want the European banking sector to look in 10 years?

Looking forward, a strong European banking sector should have three key attributes: it should be safe, profitable and integrated.

Safety does not mean that a bank cannot fail. But a bank failure should be manageable, so not to have systemic repercussions and the costs should not be borne by the taxpayer.

Profitability is the basis for the health of the banking sector. Profitable banks provide efficient services to the economy. The strength of capital generation and their attractiveness ultimately also makes them safer, and less dependent on external support.

Finally, the banking sector should be integrated. Banks should not be constrained in providing cross-border services in the Banking Union. And they should find a level playing field in locating across the Banking Union.

An integrated banking sector with cross-border services makes the economies less vulnerable to idiosyncratic shocks. Banks themselves are then less exposed to their business in a specific country or region. With integration, economic risk-sharing through cross-border flows and risk-reduction through diversification of activities across the euro area works hand-in-hand.

That does not mean, of course, each and every bank has to work across borders. But the banking sector overall should be able to provide efficient services across countries.

Let me briefly go through how far we have come over the past ten years and what are the current challenges in moving towards a safe, profitable and integrated European banking sector.

On safety, the overall development over the past years is clearly positive. During the global financial crisis, euro area banks were severely damaged, investor confidence was broken and liquidity had dried up. Europe was then hit by a second shock, the European sovereign debt crisis. Problems in banks brought sovereigns into trouble, and vice versa. A negative feedback-loop between banks and sovereigns emerged, which had to be addressed. This required substantial changes in regulation.

Europe came up with a robust answer to securing financial stability in the euro area. Compared to ten years ago, the sector is better capitalised, better supervised and subject to tighter, more comprehensive regulation. These efforts have indeed reduced the likelihood of individual bank failures and, if a bank should fail, the potential cost to the taxpayer has been reduced.

But there are still challenges.

Despite the good progress in the reduction of the stock of non-performing loans (NPLs) in the euro area – thanks to the initiatives of banks, national and European authorities – the level of NPLs in some euro area countries remains elevated. Banks need to keep up the pace of reduction, as NPLs tie up capital, put pressure on profitability, increase funding costs and reduce banks’ appetite for new lending.

Furthermore, banks in many euro area countries are vulnerable to local shocks due to their significant exposure to sovereign bonds of their domestic government. Banks have a strong bias towards buying sovereign bonds of their own home country, which reinforces the sovereign-bank nexus. The share of domestic government debt securities compared to total bank assets is significantly higher in several euro area countries compared to the US, and it is in some cases markedly higher today than before the financial crisis. 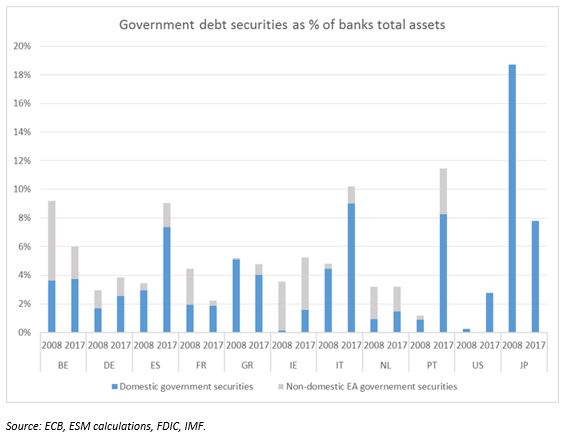 The picture is more mixed when it comes to profitability. Profits have improved, driven mainly by a normalisation of impairment costs, but have not yet returned to pre-crisis levels. Return on equity (ROE) stood at 9% at the end of September 2018 compared with 15% at the end of 2007, and by far lower than US peers (16%). 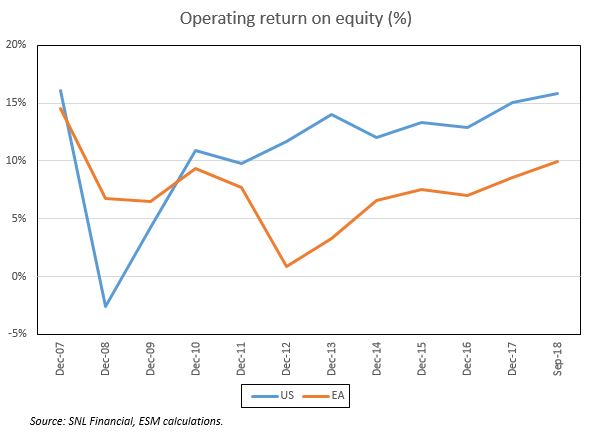 And banks clearly face challenges regarding profitability in the current environment. The low interest rate environment, increased competition from new entrants like FinTech and BigTech companies and high operating costs have made banks’ business models outdated and depressed profitability. This is true especially for smaller banks that rely mainly on lending margin to generate profits.

Costs also occur due to the new regulatory framework. And policy makers and regulators have to accept the call for regulatory efficiency. The review of the BRRD and CRDIV which is now close to being concluded actually reflects this, for example, by reflecting more strongly the proportionality principle.

However, not all banks are affected equally and those with more efficient and innovative operating models, shifting away from traditional branch networks and towards digitalisation, have generally demonstrated better profitability.

The speed of technological innovation is also often seen as a challenge to the financial system. However, banks can turn this into an opportunity flight to jump into a more digitalised world and improve online services. This can help reduce the number of branches and therefore increase banks’ operating efficiency.

The European banking system is still less integrated than before the crisis. On this account, the record of the past years is clearly disappointing. The ECB’s price-based indicator on banking market shows improvements (i.e., lower cross-country price dispersion) but price integration is still not back to pre-crisis levels. Looking at quantity-based indicators, loans to non-domestic households and non-domestic non-financial corporations still represent a very small portion of banks’ loan portfolios. 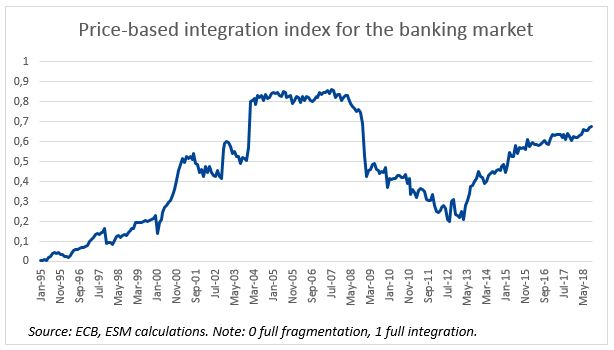 We do not see integration or consolidation as being the general cure for weaker banks. There must be an economic rationale for bank mergers. Without doubt, banks need to undertake further efforts to meet higher standards of governance and to promote enhanced risk management and risk culture to ensure that they remain sound. They need to meet these standards and demonstrate sustainable profitability under the newly established resolution framework.

Given the remaining challenges, what can be done to move forward towards a safer, profitable and integrated European banking sector?

The European Summit has mandated the Eurogroup to work on the roadmap towards a European deposit insurance. The ESM very much welcomes this, because it will allow to work on the different elements which should support the health and integration of the banking sector. The completion of Banking Union would help to establish a financial backbone for Europe’s banking sector.

Let me outline the main elements on this agenda.

Clear progress has been made by agreeing on a backstop to the Single Resolution Fund (SRF) through the ESM.

The general decision and key features are already clarified and we now work on the necessary changes in the legal framework, which entails a change in the ESM Treaty. The SRF is financed by contributions by the banking sector and its target size will be around €60 billion. In the event that the SRF resources are not sufficient, the ESM can act as a backstop and lend more money to the SRF.

The common backstop will be in place at the latest in 2024. It can be introduced earlier, if banks make sufficient progress in reducing their exposure to risks, notably non-performing loans, and this assessment will be made in 2020.

As I said before, the missing element of the Banking Union is a common European deposit insurance. This insurance would mitigate the risk of financial fragmentation by providing an identical level of depositor protection across the euro area and reduce the risk of bank runs.

Had a common deposit insurance existed during the financial crisis, and the euro debt crisis, the volume of ESM loans would have been much lower.

The specific design of the common deposit scheme and the sequencing of steps how it is build up are essential. Member States will assess whether the existing stock of assets and the regulatory reassurance is sufficiently strong before entering into a mutualisation of obligations. The European Commission has therefore put forward a proposal where EDIS would develop in two stages, with no or very limited mutualisation in the initial stage.

Another key element of the Banking Package is the harmonisation of insolvency law in Europe. National insolvency legislation remains fragmented and heterogeneous. This leads to differences in the treatment of claims and different outcomes for depositors, investors and creditors. This is evidently not the intention from a policy perspective and is an added complication from an investment perspective.

To have a common banking market, banks must be able to operate in a way that is profitable across countries. The current rules for banking groups force them to have part of their capital and liquidity blocked at the level of their subsidiaries, which acts as a barrier to Banking Union.

I therefore favour more flexible waivers on liquidity and capital requirements for banking groups, as previously proposed by the Commission. This would be one measure which leads to a better allocation of capital and liquidity.

There are other difficult issues to tackle such as the regulatory treatment of sovereign risk in banks’ balance sheets. The question is how one can reduce the excessive home bias in sovereign bond holdings underlying the bank-sovereign doom loop.

A viable way forward could be the proposal to introduce concentration charges on sovereign bonds. These charges would dis-incentivise banks to largely invest in domestic sovereign bonds without imposing a general cost on bond holdings. If other steps towards a common banking market are taken, which allow sovereigns to diversify their investor base, this proposal could be more viable. Alternatively, it could also be considered to link the contributions to the common deposit insurance scheme to the risk exposure on sovereign bonds and other assets. The ECB has put forward a proposal in this direction.

Let me conclude. We have taken first steps to make the European banking sector safe, profitable and integrated. Improved regulation and institutional infrastructure have made European banks safer than before the crisis, with larger capital and liquidity buffers. But there is still considerable ground to cover. The currently less benign but still favourable external environment, should not lead to complacency.

What I described was a number of regulatory proposals that could strengthen Europe’s banking sector. But we should also keep in mind that regulation will not be a panacea for all of the sector’s challenges. It is also of fundamental importance that banks themselves adapt to the changing environment.

Low cost-efficiency, over-banking and weak revenue diversification are the result of outdated business models. A strong risk culture and robust governance arrangements should accompany the repositioning of banks in a new market environment.

I now look forward to this conference which, I hope, will include fruitful discussions, insightful ideas, heated debates and finally consensual conclusions on the way forward in banking regulation.