The euro area: prepared for the future? - speech by Rolf Strauch

Frankfurt am Main, 7 May 2019
(Please check against delivery)

During merger and acquisition decisions, one takes a strategic view on the future. The success of these decisions also depends on a good understanding of the economic and financial environment. It is therefore a pleasure for me to share with you my take on whether the euro area is prepared for the future.

Let me start with an overview of the recent economic developments and the outlook of the euro area. I will then highlight the risks to the current outlook. In my conclusion I will describe the steps that are being taken by the European Union to deepen monetary union.

Last year, the euro area economy continued to grow, although at a slower pace than in 2017. This is in line with the maturing global economic cycle, but has also additional reasons.

Internationally, trade disputes have slowed down global trade. Within the euro area, some one-off factors such as environmental permissions in the car industry, weather conditions, and the yellow vest protests, have led to a sharper than expected slowdown. These factors are temporary, but carry over into 2019. At the same time investment and total consumption remained overall fairly robust (see Graph 1). 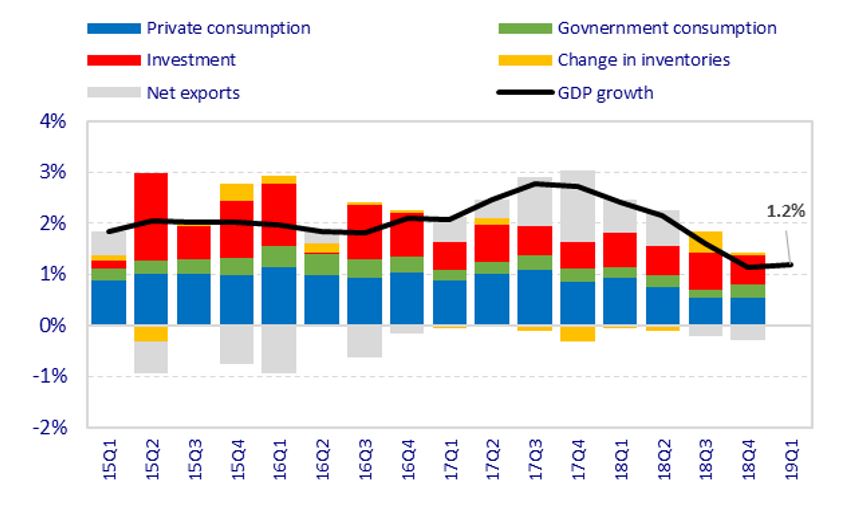 
According to Eurostat preliminary data, euro area growth in the first quarter of 2019 has surprised on the upside with an annual growth of 1.2%. This suggests some resilience of the economic outlook, based on continued employment growth and wage increases supporting disposable income. In fact, most forecasts by international and other official institutions released over the past months suggest some rebound of growth in 2020. By then, global trade is expected to somewhat accelerate again to levels comparable to global growth (see Graph 2).

Source: ECB staff macroeconomic projections. Note: 2017 refers to final data of the September 2018 projections. For the period 2018-2021 projections from the March 2019 projections have been used.

Overall, the economic outlook points to a slowdown of growth towards potential but not a recession. Soft indicators suggest that we need to be mindful about further downside risks. Survey data of new orders in manufacturing along with sentiment indicators in industry and consumer confidence portray a more disappointing outlook for 2019.

Nevertheless, financial markets have stabilised over the past months, following some contained volatility last year. Equity markets are up and sovereign credit spreads have narrowed since January. This appears to suggest that investors are reassured about the economic outlook.

Let us now take a look at the risks to the growth outlook. In my view, the top risk is the persistence of global uncertainties impacting on the export-oriented sectors and more specifically the manufacturing sector. There are two major sources of external uncertainty.

First, we do not know the outcome of the trade disputes, and this uncertainty itself weighs on investment. Even with an agreement between the US and China, the outcome for Europe is not clear as it may lead to a more managed trade arrangement between these countries, rather than a free-trade agreement. Thus, there could be negative implications for European exports. At the same time there are some “green shots” – to the extent that forecasts now assume that the US-China trade relations will not improve, a trade agreement revoking measures which were taken and announced in the past is really an upside.

Second, the most immediate risk for Europe remains Brexit, though the extended deadline gives some breathing space and further time to prepare. Most of the financial stability risks are well contained following the actions of supervisory authorities as well as the ECB and the Bank of England. Yet, Brexit is a challenging situation where losses are overall tilted towards the UK, although a “no-deal” Brexit situation would also worsen the euro area outlook.

Investors also have to be mindful of the outlook for monetary policy. There seems to be broad-based consensus that the major central banks – particularly the US Fed and the European Central Bank – have managed the transition towards normalisation cautiously and with a great deal of forward guidance.

Looking ahead, there are still some risks stemming from the unintended consequences of monetary policy. On the one hand, we may see some repricing if monetary policy will be tighter than currently expected. This could result in some financial market volatility and shifting moods. On the other hand, a continuation of very low interest rates may lead to more ‘’appetite for risk’’ among investors; which implies a higher build-up of leverage in the public and private sectors, and negative consequences for banks.

How do we assess the fiscal legacies of the crisis in this context? Some euro area countries still face high debt levels and refinancing needs which creates a constraint on the fiscal space available to react to a slowdown in growth and financial market vulnerability. Recent episodes of market volatility show that high debt coupled with policy uncertainty can have a strong impact on sovereign risk premia.

Yet, there are clear mitigating factors. First, the prevailing refinancing rates are still substantively below those at which currently maturing debt was issued. Second, most countries have used the period of low interest rates to extend the maturity profile of their debt significantly. In other words, sovereigns have created room to optimise the cost efficiency of their issuance. And countries face no immediate budgetary pressure stemming from the gradual rise in interest rate.

International organisations – such as the International Monetary Fund and the European Commission – ask member states to use the available policy space wisely. Those with fiscal space can use some fiscal expansion in the slowdown. We see that Germany, for example, is in fact planning a small fiscal expansion supporting growth (see Graph 3). Otherwise, euro area countries can strengthen long-term potential by choosing a better quality of public finances. These countries should apply a more growth-friendly policy mix that supports employment and human capital accumulation, and also promotes productive investment.

Graph 3: Fiscal expansion and contraction in euro area countries in 2019

Finally, we also have to be mindful of the political risks within the euro area. Today is the deadline to register to vote in the European elections. Pro-Europeans will face political headwinds from populist parties. New political priorities will be determined by a new European Commission but there is no reason at this stage to expect a standstill at the European level.
Overall, we expect euro area fundamentals to cushion the effects of the global cycle and allow for a gradual adjustment of growth towards potential. The euro area has overcome a number of imbalances, which led to the past crisis. This makes it stronger. But there are still public and private debt legacies from the crisis in some countries, which require careful policy setting to avoid imminent market pressure.
This brings us to the steps that are being taken by the European Union to deepen monetary union.

Reform of the Economic and Monetary Union (EMU)

To prepare the euro area better for the future, the December Euro Summit adopted a reform package to deepen the monetary union. This involves the completion of banking union, the further development of the ESM and fiscal issues. What does this imply for the ESM?

First, the ESM will provide the backstop in bank resolutions carried out by the Single Resolution Board. It will be “fiscally neutral”, which means that there will be no additional burden on taxpayers. By 2024 at the latest, the backstop should be fully operational. Right now, we are working on the last details.

Second, the ESM will play a stronger role in future economic adjustment programmes. In collaboration with the European Commission, the ESM will design, negotiate and monitor future assistance programmes.

Third, the ESM’s toolbox was reviewed to make the use of precautionary credit lines more effective. The ESM has different financial instruments at its disposal. But so far only two have been used: long-term loans were granted in the framework of an ESM programme, to Greece, Ireland, Portugal and Cyprus, and one loan was granted to Spain to recapitalise the banking sector.
Fourth, there should be more transparent and effective means to ensure debt sustainability when entering into an ESM programme.

Looking at what has happened since the crisis, and bearing in mind the December decisions, one might wonder if this is sufficient to prepare the euro area for the future. The December decisions are another important step towards a more robust monetary union. The Summit mandated the Eurogroup also to work in two areas where the discussions are still controversial: a common European deposit insurance and a euro area budget.

The deposit insurance will be funded by banks, not by taxpayers. But to get this done, euro countries need to agree on a mutually acceptable balance between risk-reduction and risk-sharing. This implies that legacy problems must be tackled and the sovereign-bank doom loop is addressed - meaning a further reduction in non-performing loans and a re-balancing of government bonds in bank balance sheets.

Regarding the euro area budget, the Summit mandated “the Eurogroup to work on the design, the modalities of implementation and timing of a budgetary instrument for convergence and competitiveness”. This is a positive step as it will encourage structural reforms and strengthen competitiveness in the euro countries. It will also enhance the resilience of the monetary union as a whole. Details of this budgetary instrument are currently being worked out.

I hope you find my speech has answered well the question on whether we are prepared for the future. The crisis has been an adjustment period in many ways. In terms of euro area reforms, a lot has happened and significant progress has been achieved. But there are still some steps remaining to make the EMU more resilient and crisis-proven. We are moving ahead on this agenda.