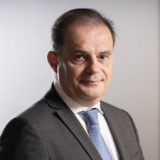 Emmanuel Moulin joined the French Treasury as deputy head of the transport office from 1996 to 1998. He was in charge of cash management in the Debt Management Office from 1998 to 2000.
He was appointed Alternate Director of the World Bank in Washington in 2000 before becoming Secretary General of the Paris Club from 2003 to 2005. In 2007, he was appointed Deputy Chief of Staff to Christine Lagarde, Minister of Economy, Finance and Industry, where he was in charge of macro-economic policy, financial and European and international affairs.

He joined the Presidency of the Republic in June 2009 as economic advisor to President Nicolas Sarkozy. After leaving the Elysée Palace in May 2012, he joined the Eurotunnel group as Deputy CEO.
Mr Moulin has been Chief of Staff to the Minister of the Economy, Finance and Economic Recovery since May 2017. He has been a member of the ESM's Budget Review and Compensation Committee since November 2020.