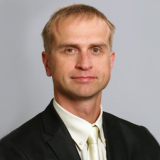 Märten Ross was appointed Deputy Secretary General for Financial Policy and External Relations on 7 October 2013. Mr Ross has had a distinguished career in finance – before joining the Ministry, he served as the Deputy Governor and member of the Monetary Policy Committee at the Central Bank of Estonia for over a decade (2000-2011). He also held the position of adviser at the Central Bank of Finland (2011-2013). As the Deputy Governor in the early 2000s Mr Ross was also involved in the process of preparing Estonia for joining the Eurosystem and the euro.

As noted, Mr Ross is a long-standing member of the Economic and Financial Committee (EFC), acting as the representative of Estonia in 2004-2011 as well as being the current Estonian member.

Mr Ross graduated with a B.Sc. in economics from the Tallinn University of Technology, and a M.Sc. in banking and finance from the University of Stockholm.

Ministry of Finance of Estonia