Terms of trade shock and the loss of wealth: Are we heading back to the 1970s? - article by Rolf Strauch

“Terms of trade shock and the loss of wealth: Are we heading back to the 1970s?”
By Rolf Strauch, ESM Chief Economist
Published in Alpbach Panorama, August 2022

The Russian invasion of Ukraine is undoubtedly a humanitarian and geopolitical tragedy that is also stifling economic recovery from the pandemic and introducing renewed uncertainties. Households and companies are facing supply disruptions and higher prices. The rise in energy prices and in a broad range of products has reached an unprecedented pace not seen in Economic Monetary Union so far, raising questions about how families and firms can address these costs. Targeted fiscal support can help cushion the blow to vulnerable households. Governments can help by pushing the energy transition forward and reducing or diversifying energy import dependencies.

The current increase in oil, gas, grain, and metal prices translates into major changes in terms of trade for countries around the world (i.e., the relative price of their imports and exports). Over the past year, the price of energy and other commodities imported into the euro area increased faster than the price of its exports, disadvantaging its economy. The rebound of global demand following the pandemic crisis initially drove this change. Initially, euro area economies suffered from the higher costs of imports, but higher demands for its exports partially balanced this out.  Renewed supply shortages emerging from the war now drive up prices in goods exported by Ukraine and Russia (and imported by Europe), such as energy, food, and metals.

Real income loss – from deteriorating terms of trade – has reached magnitudes comparable to the big oil price shock of the 1970s. The terms of trade deterioration will add to inflationary pressures in the euro area and put a dent on growth. First, the inflationary pressure will hinge on how commodity prices will affect the cost of living, which may only be fully apparent in a year. Later, the inflationary effect will depend on how they affect wage- and price-setting. The precise impact will differ across euro area countries, depending on each country’s energy dependency, trade structure and wage-bargaining system.
While there are fears that the euro area may end up in an extended period of “stagflation” (combination of higher prices and low growth) like in the 1970s and 1980s, several arguments point to Europe‘s higher resilience to energy price shocks than in the past.

First, lower energy dependency has made the euro area economies less vulnerable to energy price hikes. Energy consumption per person has been declining over the past decades. Similarly, the energy intensity – i.e., energy used to produce a given level of output – has decreased, weakening the impact of fuel price increases.
Also, the share of energy in European countries’ foreign trade has declined overall. This has a lot to do with the energy mix within euro area countries, which have increased their production of nuclear and renewable energy (see Figure 1). There are substantive differences in the specific structure of the energy sector across countries. 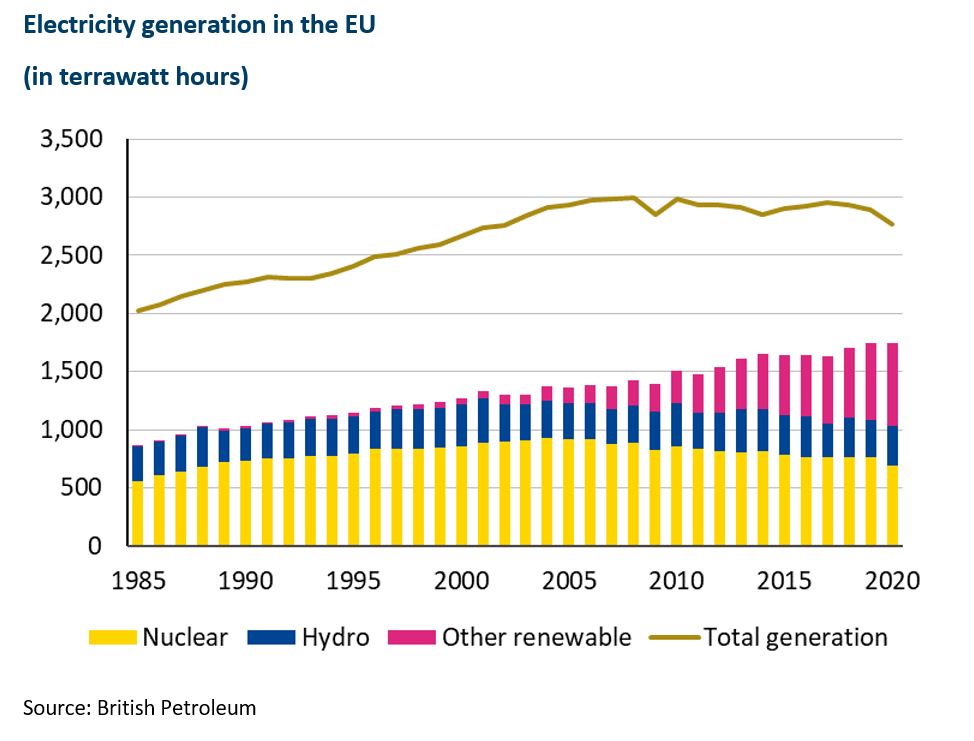 Second, labour markets function differently than in the past and generate less persistent inflationary pressures. Today, labour unions are less powerful than in the 1970s as they rally a lower share of workers behind them. In addition, there is less wage indexation, which automatically links wages to price increases. In earlier crises, especially after the second oil price shock also many workers would retire early or otherwise drop out of the labour market entirely (see Figure 2). This increased wage pressure, and is much less visible now due to past reforms. 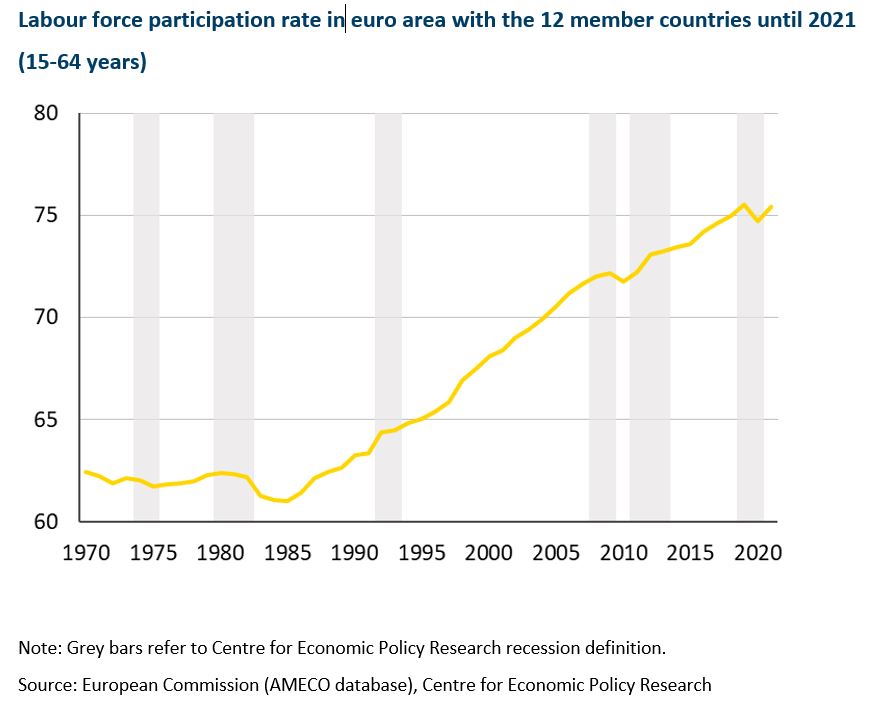 Third, the European Central Bank can build on its strong reputation, as inflation expectations have remained aligned with the objective of price stability over the medium term. Once inflation expectations become de-anchored (i.e., consumers and businesses do not believe the central bank will meet its price stability objective), tighter than expected monetary policy may be required to re-anchor them. This is more costly for growth, as higher interest rates push up the cost of borrowing and weaken consumption and investment.

In terms of policy response, the loss of wealth cannot be entirely avoided or corrected. The increases in energy and food prices will affect the poorest most, as they consume a large part of their earnings. Governments can aim to cushion the impact for the most vulnerable with targeted policies. For firms, the need for policy support depends on how energy-intensive the sector is and on whether access to financing from banks and markets remains possible. From a longer-term perspective, a rapid and effective deployment of the Next Generation EU fund seems increasingly vital. Enforcing the green transformation and strengthening energy diversity was already a key objective for the future, but a crisis has made the urgency to act more acute.

Deteriorating terms of trade lead to a loss of income and wealth, but the euro area economy is overall better prepared to weather commodity price hikes than in the past. This should make its impact less persistent, but one just has to be mindful that it is unknown how the war will evolve and that medium- to long-term repercussions are uncertain.