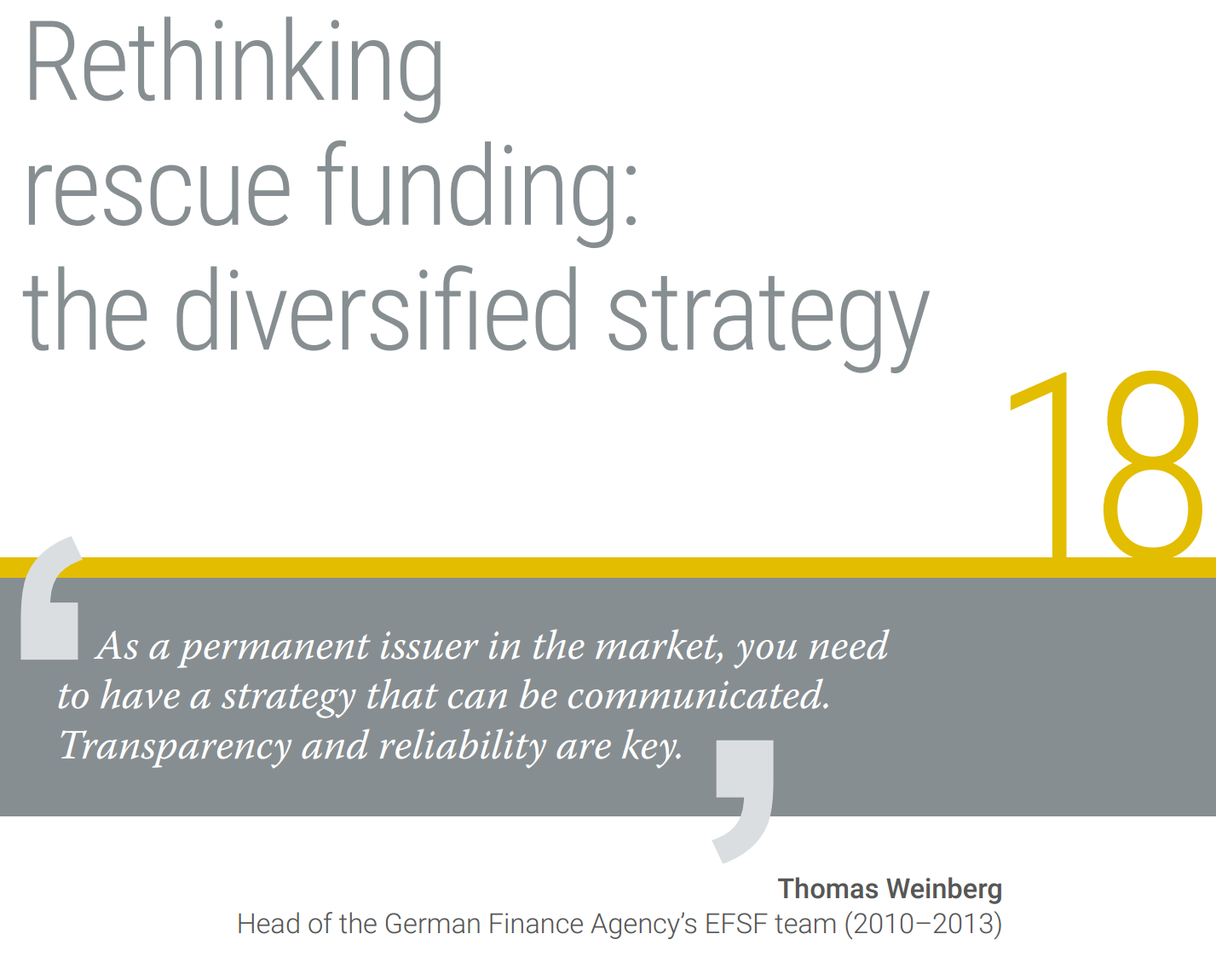 With outstanding rescue debt reaching out a couple of decades, it became obvious over the course of 2011 that the newly operational EFSF and the incipient ESM were already in the market for the long haul. This required the EFSF to step back and craft a plan for how to go about this in the fixed-income markets. The resulting diversified funding strategy, in place by November 2011, proved to be one of the firewall’s most pivotal strategic moves[1].
‘Looking back, this was the crucial element to make it possible for the EFSF and ESM to be such a success,’ said Ruhl, head of funding and investor relations. ‘With the liquidity needs for Portugal and Greece, back-to-back funding wouldn’t have allowed us to raise the money needed. We needed to broaden our approach.’
As the debt crisis deepened, the EFSF faced increased uncertainty with its initial market approach of borrowing only when ready to disburse. Programme country negotiations missed deadlines, and political discussions frequently ended without a verdict. Because the EFSF couldn’t raise money until a programme disbursement was approved, it couldn’t front-run its future borrowing needs even when it looked like another rescue was on the immediate horizon.
‘For every single country, the time between the request and the disbursement was short, which meant we had to rush to be able to help them immediately after the request,’ said CFO Frankel. ‘If you cannot prepare, it is obvious that you don’t get the best price.’
As more countries required emergency assistance, talks began on the best way to facilitate ongoing market access. The firewall’s initial back-to-back funding strategy called for a straightforward approach to financial markets: one bond, one loan, with similar maturities, rates, and financial characteristics, issued by the EFSF for the programme country. But, as the EFSF was increasingly pressed into service, inefficiencies emerged. Borrowers wanted relatively long loans, but investor appetite was often for much shorter-term securities.
Pooled funding was the first revolution. Instead of borrowing at the last minute before a disbursement was due, the EFSF began tapping the market strategically, then holding on to the money until all conditions for a payout were met.
The EFSF formally switched to selling its first pooled bill under the diversified funding strategy in early 2012. That framework evolved into a strategy, in which the ESM raises funds into a long-term pool of capital market instruments and a short-term pool of money market instruments. These two pools fund the disbursements and maintain a liquidity buffer.

To set up the diversified funding strategy, the firewall would need to build an in-house treasury to manage the liquidity pool between receiving the funding and disbursing it.
The EFSF had been drawn up to be as temporary as possible to prevent countries from overusing it, making the proposition a hard sell for some. ‘This was a tough negotiation with the Members,’ said Funding Officer Rodriguez. ‘But we were able to convince them that it was crucial to obtain the best possible funding conditions from the markets, which would ultimately reduce the lending rates for the countries receiving the financial assistance.’
The diversified funding strategy took effect just under a year before the ESM was established. When the new fund began to seek investors, they needed to approve the ESM as an institutional name just to set up a credit line that could be tapped once the new fund started to borrow, said Fouqueray-Carrick, who deals with the firewall’s investor relations. Fortunately, the rescue funds’ financing needs meant that the ESM did not need to issue a bond until 8 October 2013[2], precisely one year to the day the ESM opened its doors, giving the team ‘the comfort of a whole year to introduce the institution to investors,’ she said.
During this 12-month period, the ESM nonetheless provided financing for both the Spanish and Cypriot programmes. For Spain, the ESM supplied floating rate notes for the banking sector recapitalisation, circumventing the need to raise funds immediately on the debt capital markets.

For more on this funding approach, see ‘Focus – When bonds are better than cash’
And, because the ESM also launched a bill programme in January 2013, it was able to finance the first maturing floating rate notes as well as the initial disbursements for the Cyprus programme.
The ESM had considerable advantages over the EFSF, which at this point had already got off to a good start by issuing liquid bonds with big outstanding amounts at several points on the yield curve. A better credit rating and the strength of the paid-in capital behind it made the permanent mechanism an easier sell to investors, Fouqueray-Carrick said. But the team needed to make sure the ESM’s debut went smoothly without undercutting its sibling – which still needs to borrow billions of euros per year while its loans are outstanding. ‘This is still a challenge,’ Frankel said. ‘We don’t want investors to stop buying one and concentrate only on the other.’
The ESM also adopted the diversified funding strategy, which opened the door to other innovations. Regular bill sales, for example, would be one of the ESM’s boldest moves, and a sure sign that the institution intended to be a permanent fixture on global debt markets.
The ESM, aided by the German Finance Agency, chose an auction system for its short-term bills. The ESM auctions were innovative for supranational institutions but typical for government issuers. This approach increased the ESM’s market nimbleness.
‘Auctions are far less labour-intensive and time-consuming than setting up a syndication,’ said Weinberg, who ran the EFSF team when it was based at the German Finance Agency. An auction can be put together within a relatively short time period, and the ESM outsourced the mechanics to the Bundesbank. Weinberg said the move also underlined the ESM’s permanence because a schedule of regular auctions ‘is only used if you’re in the market forever, so to speak.’
This long-term perspective differentiates Europe’s firewalls from the IMF, which finances its programmes from Member States’ foreign exchange reserves rather than raising funds directly from markets. The IMF typically offers relatively short-duration funding to the countries it helps[3], while the ESM is specifically designed to give countries long-term access to affordable funding. The firewall harnesses the power of short-term, high-quality borrowing to make long-term loans to countries that can’t manage that kind of market access on their own.
‘It is more plausible that the ESM would engage in much longer maturity transformation than would be wise for the IMF,’ said Lipsky, former IMF deputy managing director. ‘I don’t think the idea of 20-, 40-, or 50-year debt from the IMF is in any way a workable model, but it is a possible choice for the ESM.’
The IMF’s workhorse tool, the stand-by arrangement, provides for a repayment period of 3.25 to five years, while repayment periods for its longest-term tool, the extended fund facility, run from 4.5 to 10 years[4].
When the ESM took on the Greek programme in 2015, it had reason to issue much longer maturities and therefore access investors with a preference for much longer-dated bonds. With an eye to lengthening its maturity profile, the ESM issued its first 30-year bond on 13 October 2015, raising €3 billion[5]. It followed up with its first 40-year bond on 24 November to close out its funding programme for the year[6], which was also the first ultra-long euro benchmark bond issued in the sovereign, supranational, and agency issuer world.

Bills: the ESM offers a regular bill programme, auctioning 3- and 6-month paper on the first and third Tuesday of each month. The dates are provided in advance on a quarterly basis, and demand was strong the last couple of years, outpacing supply three to four times. The ESM has been selling bills since its inception, taking over from the EFSF bill-issuance programme.
Bonds: ESM/EFSF combined issuance makes the rescue funds the largest sovereign, supranational, and agency issuer (SSA) in euro-denominated bonds.
The two funds have a unique profile in the market. Like government issuers, they seek to be transparent and to issue at the right time and in the right amounts. They also use a range of methods of issuance, such as bill auctions and taps of existing bonds. Yet the rescue funds also combine this approach with the flexibility typically practised in the sovereign, supranational, and agency space on issuance size and maturity per transaction.
Transparency creates trust in the market. Flexibility allows the funds to react to investor demand and market developments.
Marketing has been another necessary element of creating and keeping a strong market presence. Helping global investors understand the euro area’s firewall had been a priority from day one: the first transcontinental trip Regling made as EFSF CEO had been to Asia, with regular stops there ever since – including to Japan in the wake of the tsunami that damaged the Fukushima nuclear reactors. His consistent outreach paid off. ‘For the first two years, Asia bought 40% of our bonds, which is a very high share,’ Regling said. ‘It had a lot to do with our marketing efforts there.’
To succeed, ESM and EFSF debt also needs to perform well on the secondary markets, where previously issued bonds are traded. This requires excellent external credentials. To help maintain smooth trading, Regling sought to establish good relations with the Bank for International Settlements, the bank for central banks, which provides a secretariat for the international standard-setting body for banking regulation. That body, the Basel Committee on Banking Supervision, rated the firewall’s debt a high quality liquid asset, allowing it higher status in institutional investor portfolios, and gave the funds a zero-risk weighting – the same as the sovereign countries that provided the guarantees and capital[7].
To ensure their bonds remain liquid, the rescue funds frequently reopen issues. ‘We do tend to tap quite a bit. If we see a demand for a bond, we will reopen it,’ Fouqueray-Carrick said. ‘We have to make sure that the bonds are liquid enough, in order to reassure investors.’
Ruhl said the rescue funds cannot be complacent. Their funding needs are large, and will continue to be so for years to come, even if there are no new programmes.
‘In 2013, we raised €58 billion for the EFSF and €10 billion for the ESM. So in total €68 billion, which made us the fifth-largest euro issuer worldwide,’ Ruhl said. ‘That was only the third year of the EFSF and the first year of the ESM, so we were relatively new to the market. These marketing exercises were essential to extend and increase our investor base.’

Awards for the EFSF/ESM funding programme

Bond market specialists have recognised the ESM/EFSF bond-issuing team through a series of awards.