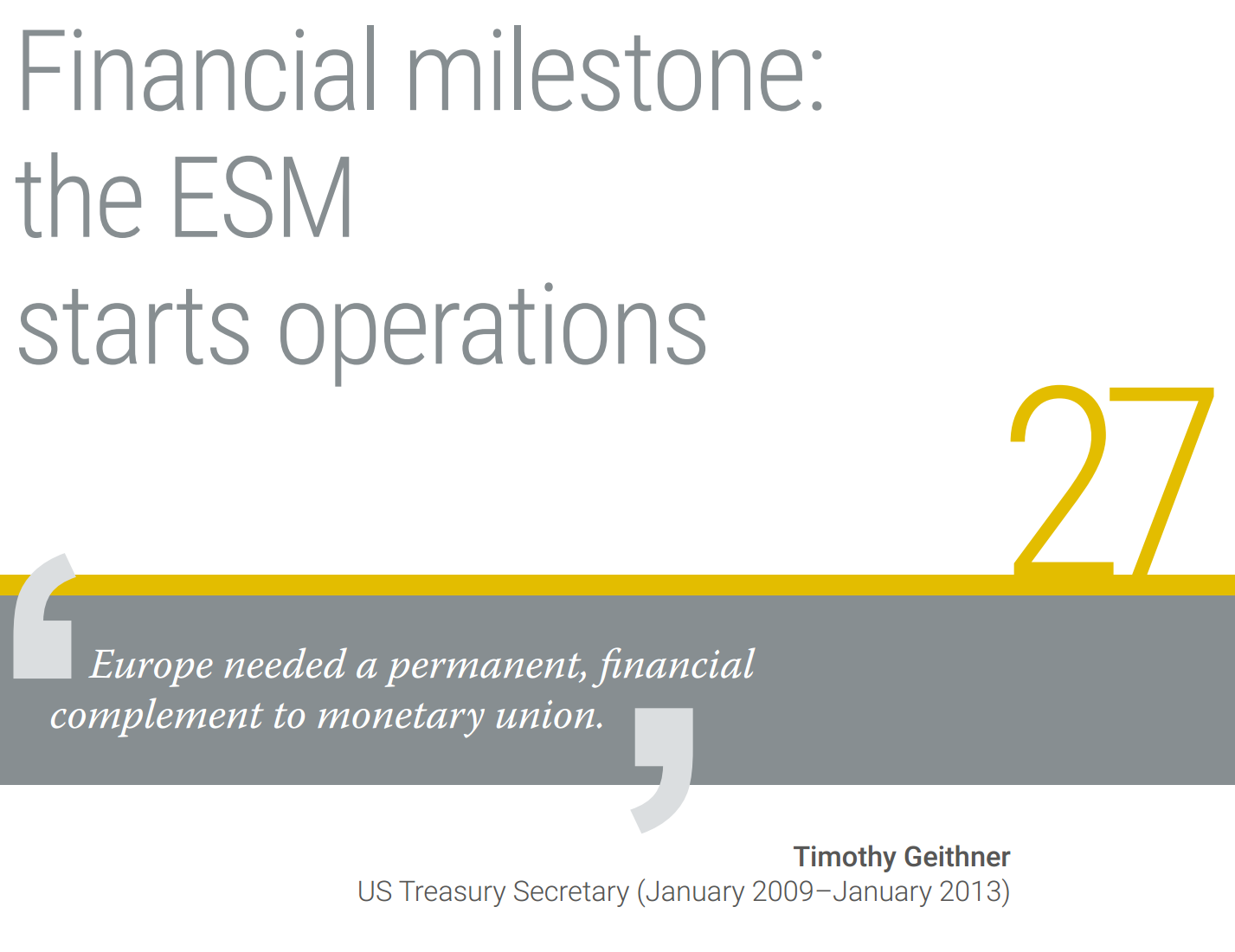 Germany’s ratification of the treaty cleared the way for the launch of the ESM at the next scheduled meeting of Eurogroup finance ministers, on 8 October 2012 in Luxembourg.
It was an opportune moment. Europe had put in place a robust crisis response plan. EFSF programmes for Ireland and Portugal were underway and Spain had secured rescue approval, Greece’s acute troubles were in abeyance, and the hard bargaining over Cyprus’s aid package was several months off.
Nonetheless, the fear that financial instability would continue to spill across national borders was still rampant. Investors were ducking for cover in perceived safe assets, inflating yields on what they viewed as riskier ones. While financial markets were leaping from one target to the next, the political response to contagion had, inevitably, taken shape more slowly. But it had been achieved.
In remarks at the Global Investment Conference in London on 26 July, ECB President Draghi had given policymakers the room they needed to manoeuvre, seizing the market’s attention and refocusing it on the work done. He said the central bank would unleash overwhelming resources to defeat speculation about the possible breakup of the euro region.
‘Within our mandate, the ECB is ready to do whatever it takes to preserve the euro,’ Draghi said. ‘And believe me, it will be enough’[1].
While Draghi’s declaration had an immediate stabilising effect on markets, it occurred in the broader context of more than two years of crisis fighting. A grand bargain of sorts had emerged between the euro area governments and the ECB, giving Draghi the confidence that the common currency was en route to becoming a more sustainable union.
‘There is more progress than has been acknowledged,’ Draghi said at the same London event, citing economic reform and deficit reduction at the national level, along with improved budgetary policing and plans for toughened bank supervision at the European level. And looking ahead to the foundation of the ESM, he added: ‘[…] also the various firewalls have been given attention and now they are ready to work much better than in the past’[2].
A week after the London speech, the ECB cemented its resolve by announcing conditional plans to buy the bonds of programme countries on the open market[3]. When it published the technical features of these outright monetary transactions on 6 September, the ECB made clear that it would act on behalf only of countries in an adjustment programme administered by the rescue funds. ‘Strict and effective conditionality’ as part of an EFSF or ESM package would be a ‘necessary condition’ for the targeted ECB bond buying, the central bank said[4].
The ECB pledge provided critical relief for the EFSF’s aid recipients, the drive for banking union, and the transition to the permanent rescue fund. The various crisis-fighting strands were tied closely together, as Germany’s Die Welt newspaper noted in a commentary on how the ESM’s debut would ‘fundamentally change the monetary union’[5].
While the markets were impressed by the central bank’s undertaking, ‘the ESM will play an important role, because Draghi has linked his intervention to the rescue fund,’ Die Welt wrote. It would take political backing for a distressed country – as demonstrated by being in an ESM programme – to trigger ECB action.

The Eurogroup agenda[6] on the ESM’s official start-up date included progress reports on the programmes for Greece, Spain, and Portugal, a look at the talks with Cyprus, discussions of longer-term euro area reforms, and preparations for the meeting of the Group of Seven finance ministers and central bankers a few days later in Tokyo.
This Eurogroup was held in Luxembourg, the venue for EU ministerial meetings every April, June, and October. Finance ministers gathered in a building used for meetings by the Council of the European Union, an edifice that had reopened in April 2012[7] after nearly a decade of renovation and reconstruction.
The day’s ‘milestone’ – to quote Rehn, then the European commissioner for economic and monetary affairs and the euro – was the first order of business, with the ministers convening as the ESM’s Board of Governors for the first time and declaring the permanent fund operational. They met in the same room as they would later for the Eurogroup. It was the only feasible setting: the rescue fund moved into a more permanent home only two months later in December. In October, it didn’t have the space to host a top-level meeting.
The ESM’s inauguration prompted reflection inside and outside the meeting chamber. ‘Two and a half years ago when Greece first found itself cut off from the markets, we had absolutely no instruments at our disposal to intervene and provide conditional financial assistance,’

Rehn told a press conference. ‘Today, in fact nine months earlier than initially foreseen, we are marking the entry into force of the European Stability Mechanism, which is an important achievement’[8]. 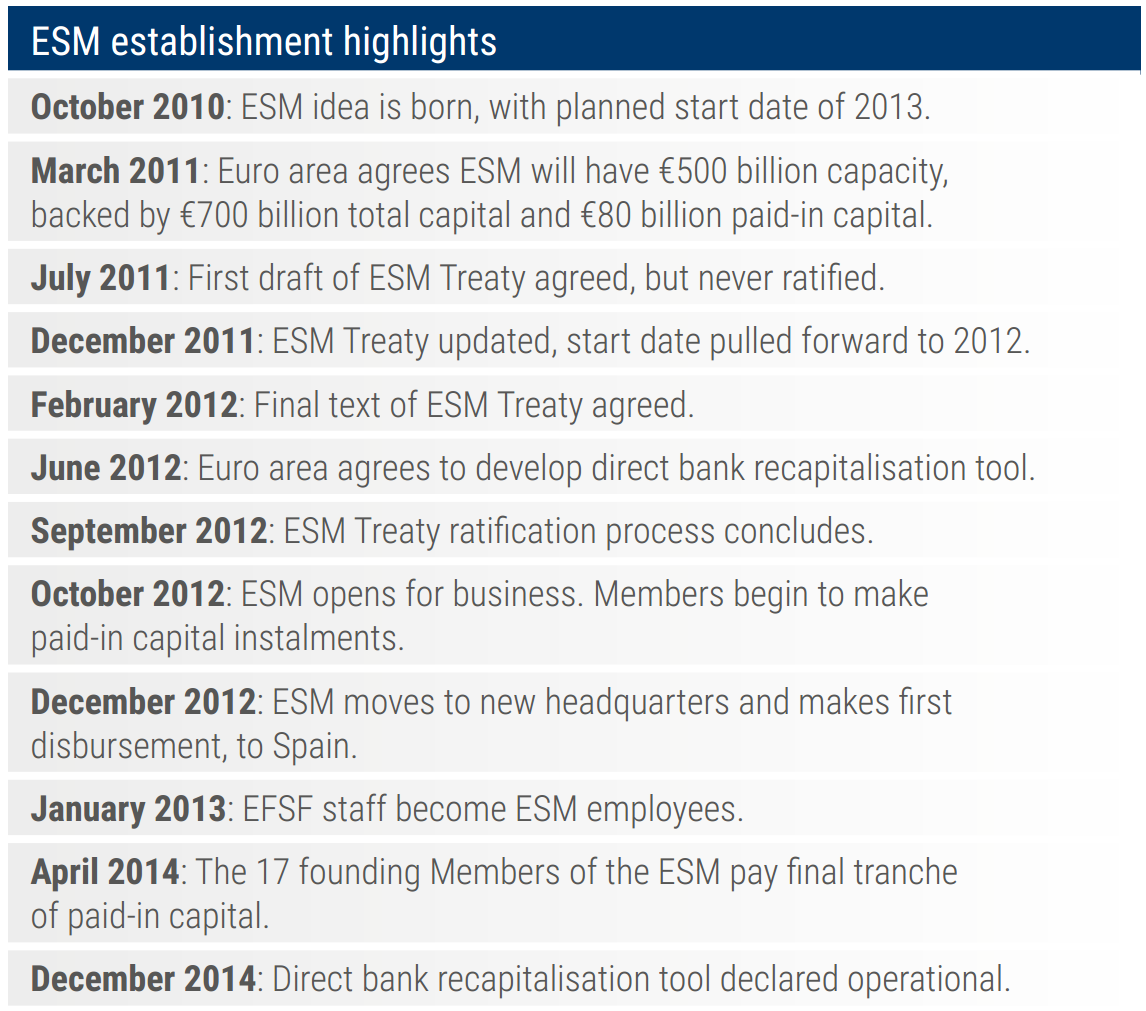 European media marked the occasion with maps and flowcharts highlighting the structural differences between the ESM and its predecessor. Ouest-France, a French newspaper, urged its readers not to be cynical about the founding of another institution for the region. ‘It doesn’t have a simple name and is unlikely to make Europe more appealing to those who only see it as a hotchpotch of opaque institutions,’ the newspaper said. ‘And yet! The inauguration yesterday of the European Stability Mechanism is an important step on the winding road of the economic and monetary union’[9].
In Germany, the Handelsblatt business newspaper noted that the transition from a temporary to a permanent mechanism was far more than a ‘formality’. In addition to possessing its own resources, Handelsblatt said that the ESM would provide ‘democratic legitimacy’ for any ECB bond purchasing, under the conditions set by the central bank[10].
Bond markets saw October 2012 as a watershed and a culmination of the mid-2012 actions to stabilise the currency union. As a result, bond yields across the euro area fell back from their crisis peaks and for most countries entered a new and more sustainable range. In 2015, when the euro was again put to the test, financial market contagion erupted on a smaller scale than when there had been no permanent firewall.
For ESM staff who were present at the 2012 creation, more than a year of organisational planning, drafting, and fine-tuning – often in 80- to 100-hour working weeks – was condensed into a 12-point agenda that the finance ministers got through in barely an hour.
‘It was like training for the World Cup, then making it to the finals – super exciting,’ Secretary General Anev Janse said. But after the Board of Governors meeting, there was still another half to play the next day. It wasn’t until after the Board of Directors approved further internal procedures that rescue fund staff could return to the office to celebrate. 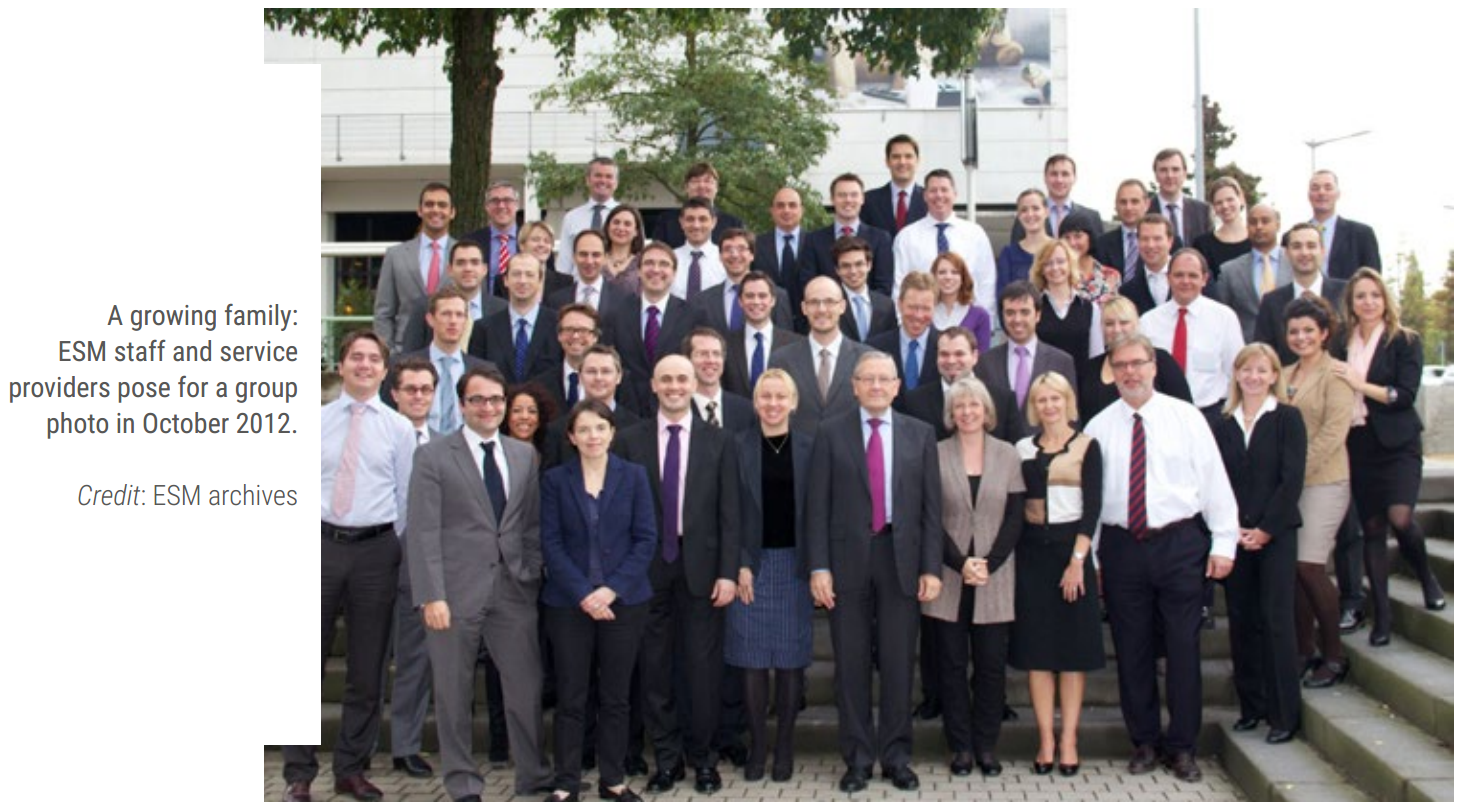 On the personnel front, the ESM’s inaugural meeting named Juncker, then head of the Eurogroup, as the permanent fund’s first chairman of the Board of Governors, and Regling as both managing director and sole political appointee. The ESM would be formally without any staff until 1 January 2013, when most of the EFSF staff’s contracts would be officially converted into ESM contracts. In the meantime, the EFSF staff would handle the ESM’s tasks.
‘For the future, whenever you have questions related to the ESM, please put them to Klaus,’ Juncker said at a joint press conference with Regling[11]. A day later, Regling was off to Tokyo for the annual meeting of the IMF, to start marketing the ESM to global investors[12].