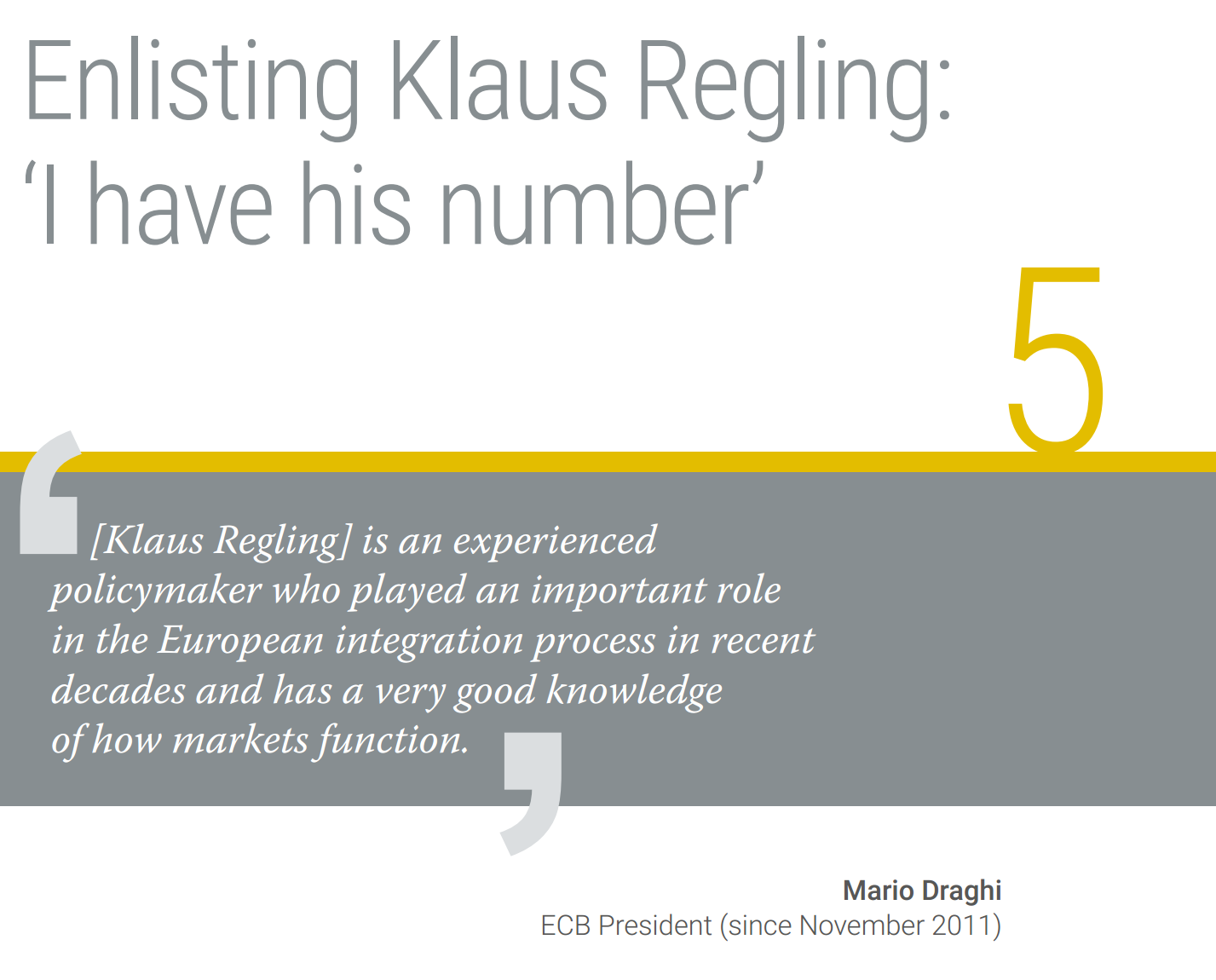 When the euro area agreed to start a rescue fund, it needed someone to run it. In June 2010, during meetings in Luxembourg, finance ministers began kicking around the names of potential candidates. Several rose to the top, but Juncker, then chief of the Eurogroup, had a clear idea about whom to recruit.
‘Klaus Regling is a leading expert in international and European finance. With him as CEO, the company’s quality and credibility were secured from the start,’ said Juncker, now European Commission president. ‘It was only natural for me to insist on his nomination.’
Behind the scenes, the recruitment process was a little bumpier. Wieser, Eurogroup Working Group chairman during the crisis, was dispatched to run the search, alongside the finance ministers of Belgium and Malta. According to Wieser, when the time came for the three initial candidates to be interviewed, Juncker was furious that Regling wasn’t on the list. 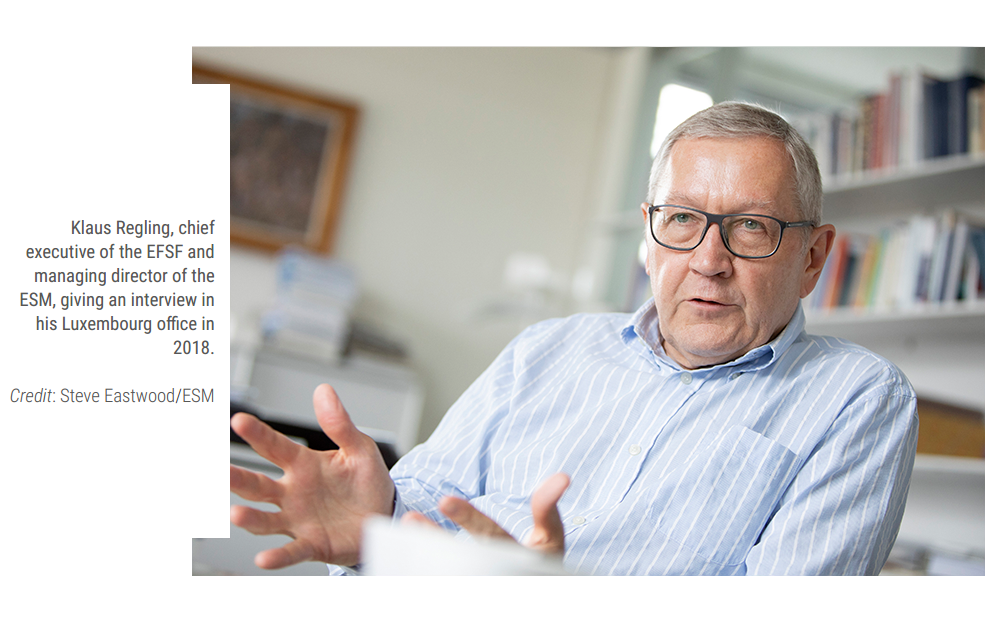 ‘He said, “Why haven’t you chosen one already?”’Wieser recalled. ‘I said, “Well, first comes the closing of the call for candidates, then we arrange for interviews,” and he replied, “I’m not interested in that, I want everything to be done by tomorrow. And incidentally, I hope that Klaus Regling has been nominated by the German government.” I said, “No, Klaus is working together with Max Watson on some analysis for the Irish government, and he has not put forward an application”. Juncker was hopping mad, I’ve never seen him that way – “This is intolerable” – and then he turned to the Germans and asked, “Why the heck didn’t you propose Klaus?”’
It emerged that, on the day Wieser’s group of finance ministry deputies announced the search for chief executive candidates, the German representative hadn’t passed on the information to his home base. This oversight set off a scramble to track Regling down. ‘People were taking out their mobile phones and saying “I have his number somewhere,”’ recalled Heinrich, then a senior finance ministry official for Luxembourg.
Regling had just returned to Brussels after taking a fellowship at the Lee Kuan Yew School of Public Policy in Singapore to research financial and monetary integration in Asia. From his academic perch in the tropics – and the window of his high-rise apartment – Regling had tangible evidence of how the market turmoil was affecting the world economy. ‘Every day, I saw the number of idle ships in the port increasing. World trade was coming to a standstill towards the final months of 2008. It was fascinating to see – and scary.’
As director-general for economic and financial affairs of the Commission from 2001 to 2008, Regling had become well known in every European finance ministry. In that position, he had attended all the monthly Eurogroup meetings of finance ministers, where he got to know Juncker, who started chairing the meetings in January 2005. There was an initial positive reaction from several ministers who knew Regling from this time and could vouch for his willingness to take a tough line with countries that were reluctant to follow through on their economic recommendations.
Regling had the level head and ‘sound technical understanding of what was happening’ to do the job, plus he was sufficiently accomplished in the policy arena with his Eurogroup experience, yet he wasn’t seen as a politician, Heinrich said. But he wasn’t sure Regling would want the job.
‘I had met him a few months earlier and he was all excited about his consultancy work,’ Heinrich recalled. Contacted at the last minute, Regling fortuitously happened to be in Belgium. Heinrich said that, when the EFSF call came, ‘to my surprise,’ Regling responded positively.
As a believer in the euro, Regling hoped that the proposed firewall fund would not be needed in the end, even if that meant any potential new job would be slow-paced. But he agreed to interview the next morning, and like the other candidates made his case in person. The choice was clear. ‘I reported back to a special and short Eurogroup meeting after that on the findings of the panel, which had decided on Klaus. It was incredible,’ Wieser said.
‘I never got a job so quickly,’ Regling said.
Lagarde, now IMF managing director who was French finance minister when Regling was chosen, credited ‘a fascinating combination of professional experience’ with making him perfect for the role. ‘He combines the layers of an internationally minded person, as a former IMF staff member, and a true and very deeply convinced European.’
Regling’s good relations with all of his former employers, including the IMF, the German finance ministry, and the European Commission were an essential part of how the EFSF and ESM joined an already crowded group of negotiators.
The Commission’s Angel said: ‘For some of my colleagues it was not always easy to get used to the fact that there was another player in town whose needs and views we needed to take into account. That is over now. The fact that it was Klaus helped considerably because Klaus knew everyone. He managed to have the EFSF invited into the Eurogroup Working Group of deputy finance ministers and to the Eurogroup of finance ministers immediately. I’m not sure anyone else would have secured that so easily and so quickly.’
The goodwill lasted throughout Regling’s first five-year term at the ESM, which followed his initial EFSF appointment, and has reached into a second, announced in February 2017. ‘His appointment for a second term in office was very welcome,’ said the ECB’s President Draghi. ‘His broad knowledge and experience have been very beneficial for the functioning of the ESM and cooperation with the ECB.’

A life in public service