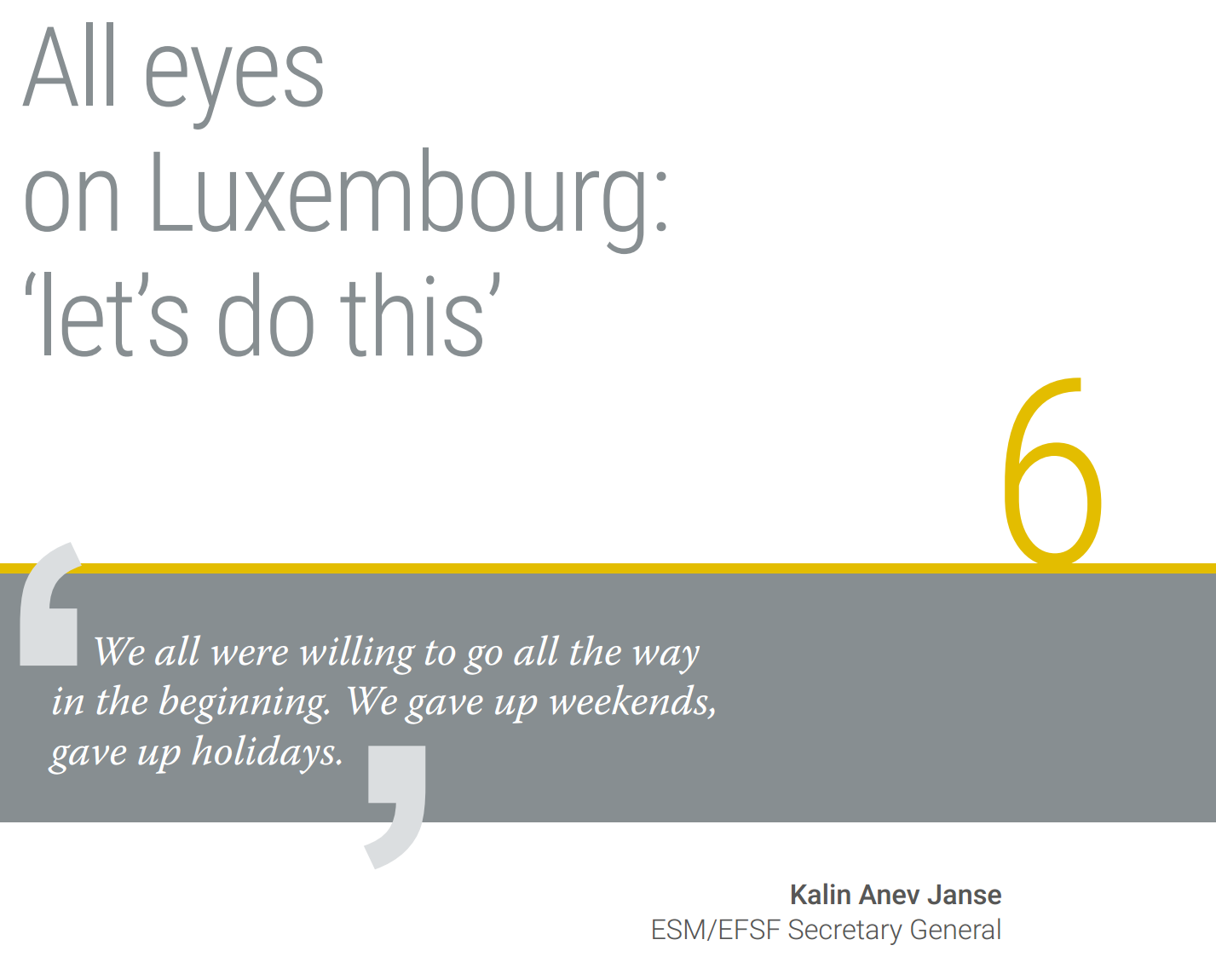 A role for the European Investment Bank?

Early in the euro area’s crisis-fighting brainstorming, the EIB popped up as a potential vehicle for providing third-party, market-oriented aid. However, taking on an ambitious new mission would have required new capital for the EIB to ensure its hold on its essential AAA credit rating. A further complication was that the EIB is an EU institution that represents all EU Member States and operates around the world, whereas the EFSF would be designed to target the single currency area alone. The EIB’s Members were not looking for the investment bank to take on greater exposure to the euro area.
In the end, Member States decided that crisis-fighting powers weren’t a good fit with the EIB’s traditional role of financing development projects in Europe and around the world. But the EIB could offer advice, staff, and office space.
‘We had a lot of long crisis meetings with EIB risk, legal, finance, and corporate governance to decide how best to handle it. The uncertainty of the EFSF rating was a big issue for the EIB. There was a fear that the EIB’s rating could deteriorate. At the same time, the EIB wanted to help, in the end deciding to do so at arm’s length,’ recalls Secretary General Kalin Anev Janse, who worked at the EIB at the time and was coordinating the EIB’s support for setting up the EFSF.
As his second-in-command and chief finance officer (CFO), Regling hired Christophe Frankel, a Frenchman who had served in senior positions at the French government debt agency and in private sector finance. Strauch, who had been at the ECB, also joined immediately as chief economist.
Starting with a blank slate was intimidating but also offered opportunities. ‘It was a challenge but at the same time very positive,’ Frankel said. ‘We could build something that was really adapted to our needs.’
Regling outsourced whatever he could. For example, market borrowing operations would be carried out by the German Finance Agency and the EIB would handle accounting and information technology. He also turned to Anev Janse.
Only a few years out of university, where he had been active in Dutch politics, Anev Janse was working at McKinsey & Company and then moved to the EIB for a one-year secondment during the crisis. He was then assigned to the EFSF project, where he would begin building the EFSF’s internal structure while Regling, Frankel, and Strauch focused on winning over the policymakers and markets. As it happened, Anev Janse was wheeling his suitcase out the door for a trip to Amsterdam, but his supervisor stopped him: plans had changed. The call had come in to work on the EFSF, and that would be Anev Janse’s job. The temporary assignment became permanent when Anev Janse was appointed the firewall’s secretary general starting in 2011. He was impressed by Regling from the start.
‘As a boss he is great,’ Anev Janse said. ‘He trusts his staff. He can be tough and very challenging at the same time; he’s very clear about what he wants delivered.’
The EFSF was originally conceived of as a 12-person shop, as shown by the institution’s founding organisational chart. This staffing framework was one of the first data points Regling could show to a curious yet cautious global investor base as part of the long process of building confidence. In July 2010 – before the firewall was fully up and running – Regling took the chart to an Asian investors’ conference in Beijing hosted by Singapore’s sovereign wealth fund. 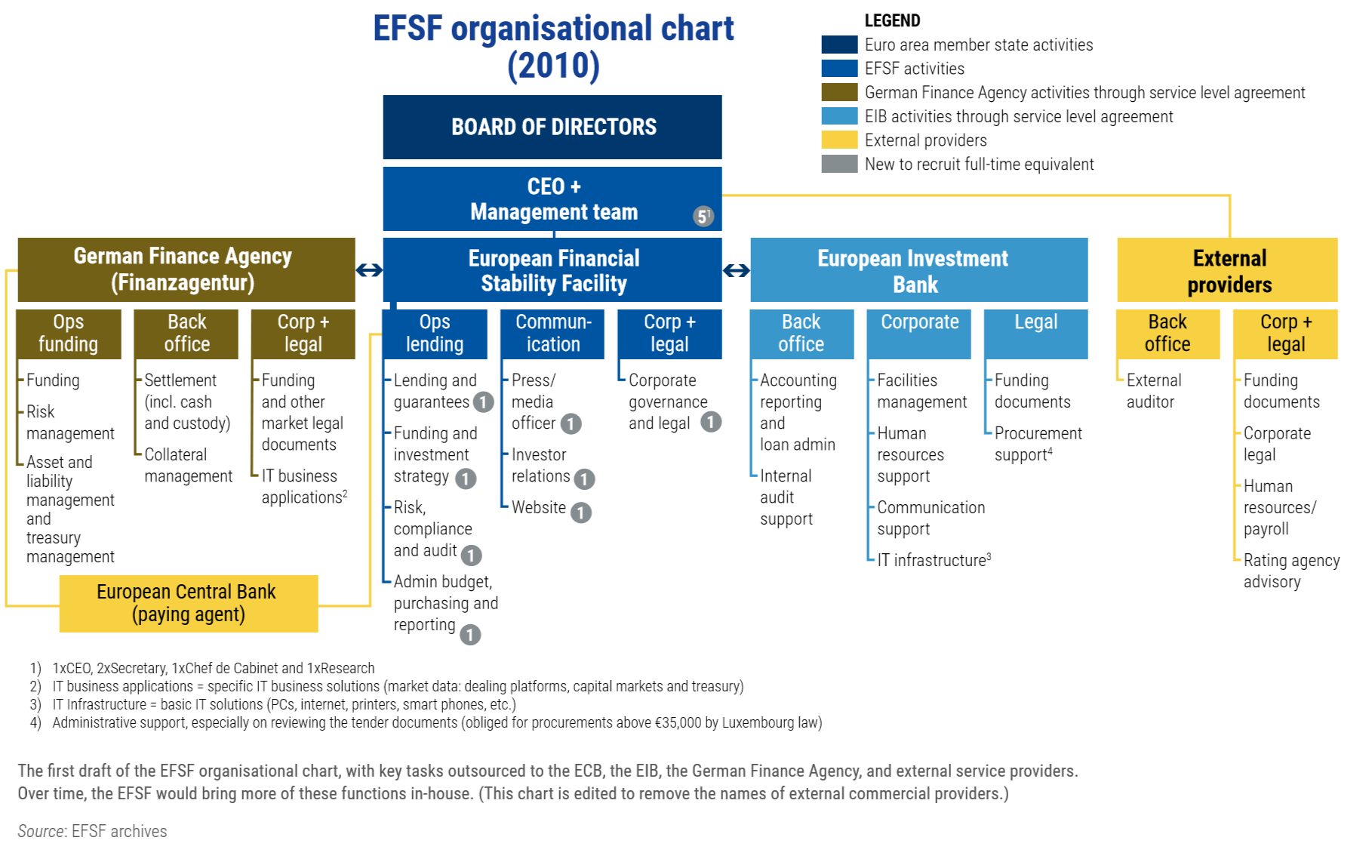 The organisational chart was never an exact model. From the very beginning, new hires took on multiple roles and dedicated their waking hours to getting the firewall off to a good start, and functions were expanded or absorbed as the organisation grew. Conceptually, however, the organisational chart was instrumental. The first step for the new firewall was literally centring itself in order to get organised.
‘When Kalin did the first organigram with me, he wanted to put the EIB in the centre and the EFSF was on one side. I said “No, no. We should change this around. The EFSF is at the centre and the EIB is on the side, alongside the German Finance Agency,”’ Regling said.
A dozen people was a lean concept for an organisation as ambitious as the EFSF, and even that number did not assemble overnight. ‘The concept of having 12 was not stupid; it was possible to do this,’ Regling said. One can do a lot with just a few people, who work very hard. And we had the support of the German Finance Agency and the EIB.’ 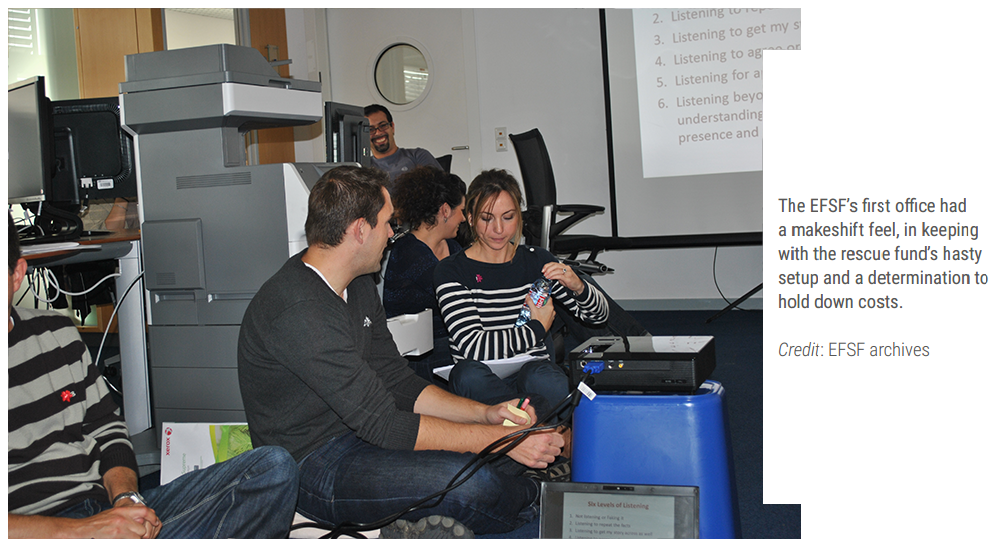 The early team was extraordinarily dedicated – as they needed to be. The crisis was turning so many lives upside down, and everyone who signed up was motivated to do as much as they could. It certainly couldn’t be only for the money. ‘We never spent in an exaggerated fashion,’ said Ralf Jansen, the firewall’s first general counsel. ‘There was always this sense of soberness. Being down to earth. Not overdoing it. How would you talk to a Greek pensioner absorbing a cut if Klaus lived a life of luxury?’
Jansen welcomed the prospect of joining a team with a purpose larger than itself. It was a unique opportunity to do something that people might one day consider historic. There was no roadmap, no time to worry about what would happen if something went wrong. ‘We joined for the project. It’s amazing looking back – the amount of money and risk we dealt with. Coordination basically took place while we were doing it.’
As the EFSF started operations and the euro area began expanding the facility’s duties while planning for a permanent fund, it became clear that the firewall would have to be beefed up. Shareholders would expect the rescue fund to have ironclad risk management and auditing abilities, given the amount of money at stake.
Recruiting letters went out to other international financial and private sector institutions. ‘It was a call for help – we are trying to manage this crisis, we need help and we need your people,’ Anev Janse said. ‘The way we came together was a bit of coincidence, but that made us extremely strong.’