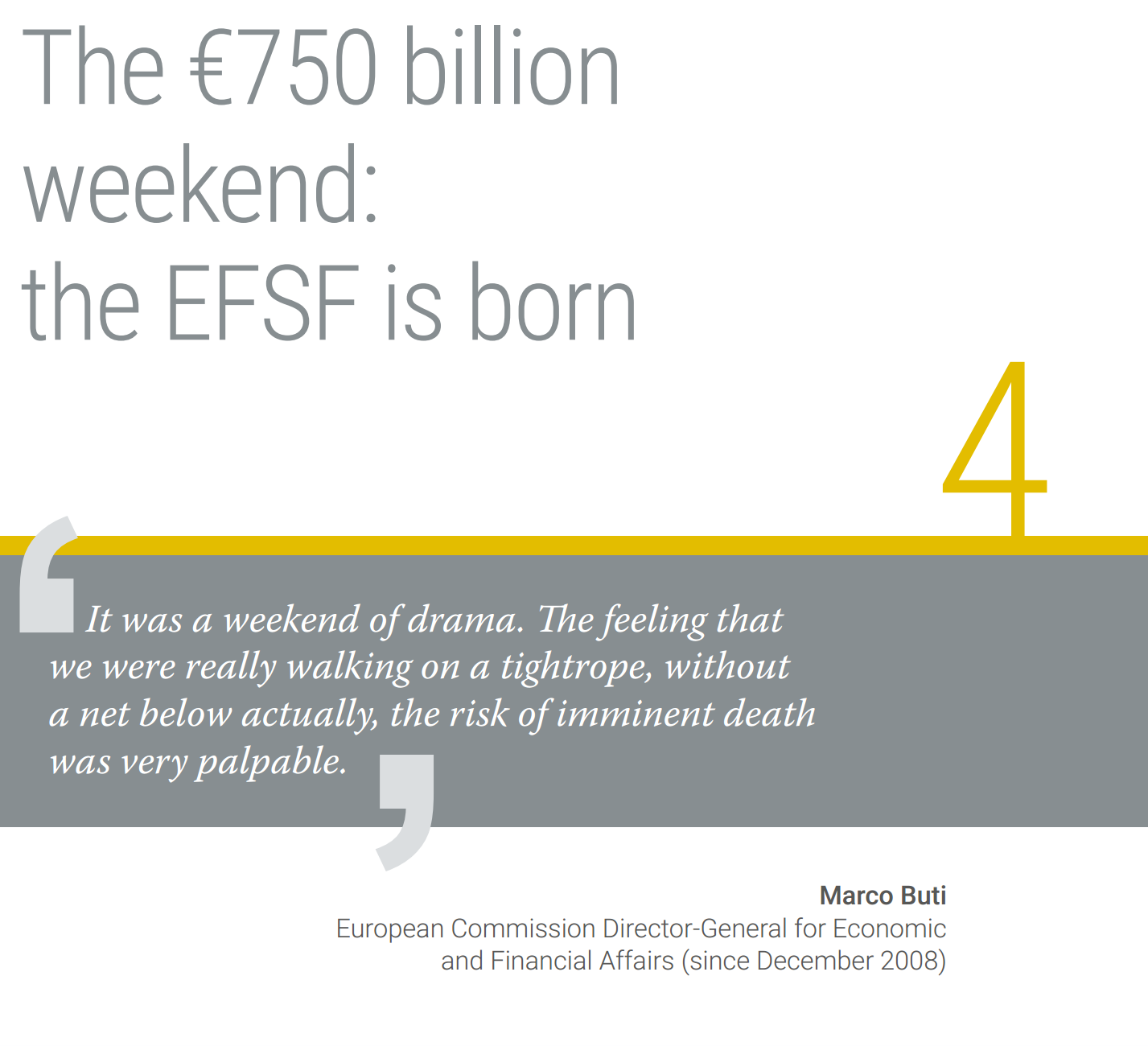 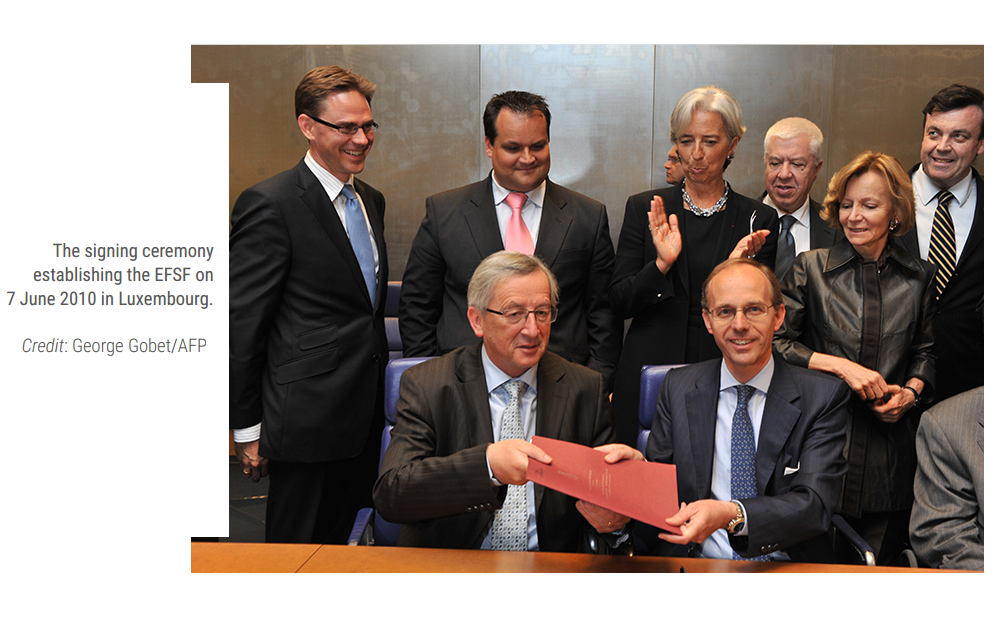 Looking back, Commission President Juncker called the decision ‘historic’, adding: ‘Thanks to the political courage and ingenuity of a few of the people present, we took bold steps to defend the stability of the euro.’
It was a momentous achievement for the euro area, and for its leaders. Lagarde, recalling the early morning press conference that followed, said: ‘We were all completely shattered, and probably looked terrible, but we were so proud to announce that we had finally put this thing to bed.’
For Schäuble, the creation of the EFSF, as a forerunner of the ESM, was proof that despite differences of opinion the euro area could act when it needed to and display solidarity, if there was the necessary conditionality. ‘That is very encouraging. All those involved were willing to work on reaching compromises that were necessary and in everyone’s interest.’
At this point, the official plan was still that the firewall would never be used. It would just be put in place, and put in place quickly, to calm the markets. 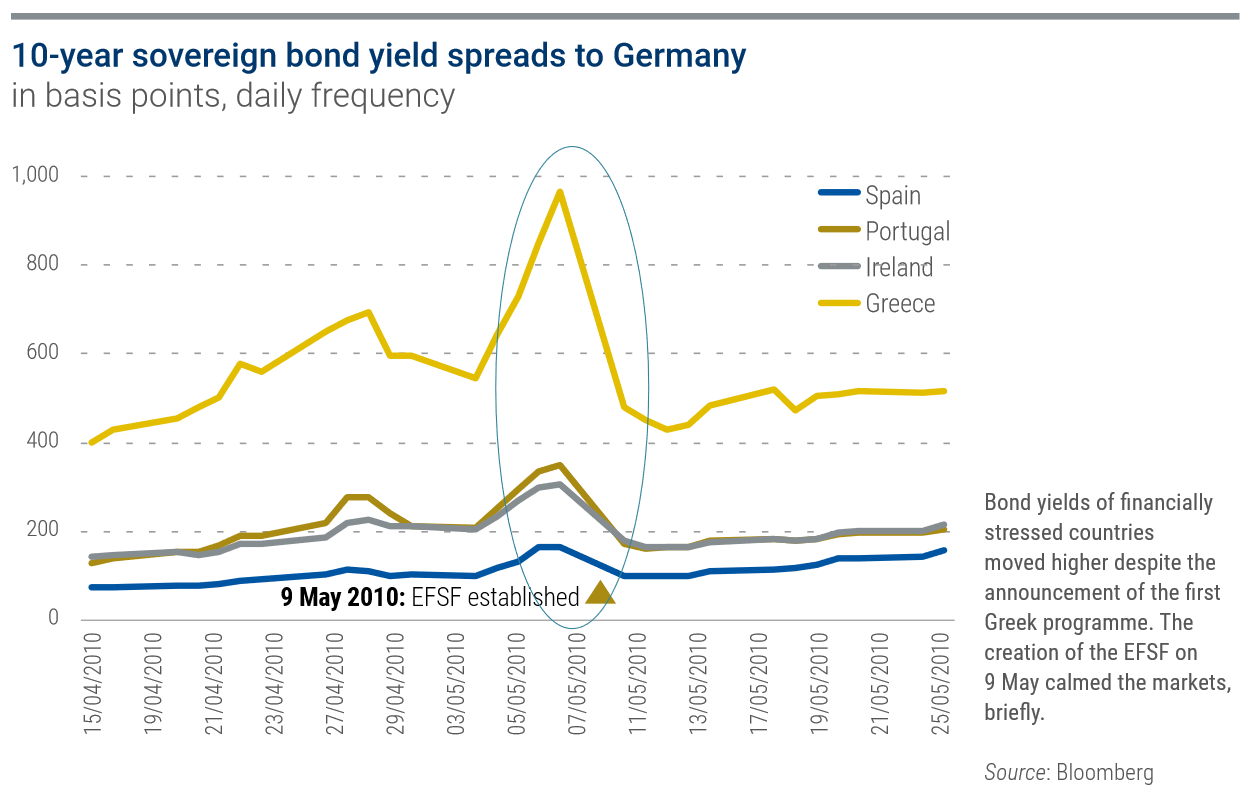 The next question for the new fund was: how big? Wieser felt the number had to be hefty enough to impress the markets or they would never calm down. ‘I figured that €200 billion would be enough, but I also figured that certain member states would bargain me down by 50%, so I put in €400 billion. To my surprise, nobody bargained it down,’ Wieser said. ‘Then in order to make it a round figure, with the EFSM at €60 billion, we just tacked on another €40 billion to the EFSF, and that’s how the €440 billion of the EFSF came into existence. It was not by design, it was a mixture of arithmetic and accident.’
At the end of that overnight marathon, the EU ministers announced that they had approved a total €500 billion euro area rescue fund. This would include a rapid-reaction EFSM of €60 billion and a special purpose vehicle that the euro area member states would guarantee. The vehicle would have a volume of up to €440 billion and would expire after three years, according to the finance ministers’ statement of 9 and 10 May 2010[6].
With some diplomatic finesse, the euro area managed to convince the financial markets that it had an even bigger bazooka because the IMF would kick in another €250 billion. The IMF never put such a specific figure on it publicly, but its then-Managing Director Strauss-Kahn indicated as much after the meeting.
‘The IMF will play its part, in the interests of the international community, in addressing the current challenges. In particular, we stand ready to support our European members’ individual adjustment and recovery programmes through the design and monitoring of economic measures as well as through financial assistance, when requested,’ Strauss-Kahn said. ‘Our contribution will be on a country-by-country basis, through the whole range of instruments we already have at our disposal. We expect our financial assistance to be broadly in proportion to our recent European arrangements’[7]. In that ballpark, the EU figured it could count on the IMF to pick up roughly a third of any new programme, with the other two thirds coming from the new firewall.
In this way, the €750 billion first bulwark came into existence. The headline figure helped calm markets. To quell uneasiness at the EU level, the Commission still had a €50 billion balance-of-payments mechanism, available to help distressed non-euro countries, such as Latvia, Hungary, and Romania, with funds raised using the EU budget as collateral. Combined with the EFSM’s €60 billion, a total of €110 billion in rescue financing was possible through Commission-administered funds – a point emphasised in communications with the European Parliament, which kept a close eye on euro area doings while representing the entire EU. The EU’s entire budget for 2010 was an only slightly larger €122.9 billion, but the rescue mechanisms wouldn’t touch that[8].
Central bankers and finance ministers around the world had been watching the EU’s sleepless Sunday night. As the talks dragged on, there was a simultaneous conference call of finance ministers and central bankers from the Group of Seven major countries. And in Washington the IMF was on full alert.
‘We were on the phone in Washington with the staff. This all was happening in the context of an endless conference call that went on for hours, and hours, and hours, between Brussels, the central bankers in Basel, plus participants in Washington, and who knows where else,’ said the IMF’s Lipsky, at the time Strauss-Kahn’s number two. ‘At least something concrete finally was agreed. The EFSF was announced only after markets had already opened in Asia. And, the ECB was ready to act in markets immediately, if needed.’
The euro area’s cash could now be counted on. And although the permanent ESM didn’t yet exist, its foundation had been laid. ‘When the EFSF was founded on 9 May 2010, it was already clear to everyone that a European crisis mechanism could not, in the long term, be based on a guarantee-backed special purpose vehicle headquartered in Luxembourg,’ Schäuble said. ‘Nobody denied the need for a European crisis mechanism based on international law.’

The European Central Bank steps up

To give the new euro firewall time to get started, the ECB provided some much-needed breathing room. With the Securities Markets Programme, in operation through September 2012, the ECB aimed to preserve liquidity in euro area public and private sector markets through bond purchases[9]. Under the programme, the ECB bought government bonds of Ireland, Greece, Spain, Italy, and Portugal. The scheme would improve the performance of malfunctioning segments of the euro area debt securities markets.
Shortly before the press conference announcing the new EFSF firewall, Rehn let the cat out of the bag that the ECB was moving simultaneously to reassure markets. Rehn had been told that the ECB would go public at midnight. So, thinking the ECB had already announced the move, he confirmed the action to the Financial Times Deutschland. ‘I thought that, because it was 1.30 or 2.00 and I didn’t want to look stupid, I said: “Yes, I’m aware the ECB has been acting.” Because I was told they would go public at midnight,’ Rehn said. ‘So I revealed their Securities Markets Programme scheme, because I mistakenly thought they had already gone out, and also because I instinctively wanted to give the correct impression that the euro area now had a big bazooka to contain contagion in the financial markets. But they only did so later.’
The ECB’s goal was to preserve financial stability by heading off breakdowns in trading and to strengthen the monetary policy transmission mechanism[10]. Some countries, however, were concerned that such operations could spark inflation by loosening the central bank’s monetary policy stance. To prevent this, the impact of all operations was sterilised with technical measures that re-absorbed liquidity.
‘I had enormous resistance from the governments on direct intervention in the secondary market, which was the only way to deter speculation,’ said Trichet. ‘We had the capacity to intervene immediately and the governments had to set up their own capacity.’