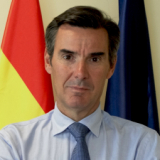 Member of Budget Review and Compensation Committee since 13 July 2018, appointed until 8 October 2020.

Carlos San Basilio is the Secretary General of the Treasury and International Financing at Spain’s Ministry of Economic Affairs and Digital Transformation. His responsibilities include international financial affairs, domestic financial policy, European economic and financial affairs, the issuance and management of Spain’s Central Government Debt, its risk and liability management, the treasury and cash operations, the coordination of Spain’s regional government public issuers and a multiplicity of other public sector related financing programs.

Prior to his current position, he has held several positions including Director General of the Treasury, Head of Resolution at the Spanish Resolution Authority (FROB), and senior counsellor at the Spanish permanent representation to the European Union. In addition to this, he has had a wide professional experience in the public and private sector.
Carlos San Basilio holds a Masters in General Management by IESE, a Masters in Public Administration by Harvard University and a Degree in Economics by the Universidad Autónoma de Madrid. He is a member of the High Corps of Spanish State Economists and Trade Experts since 1989.