Strengthening the international role of the euro 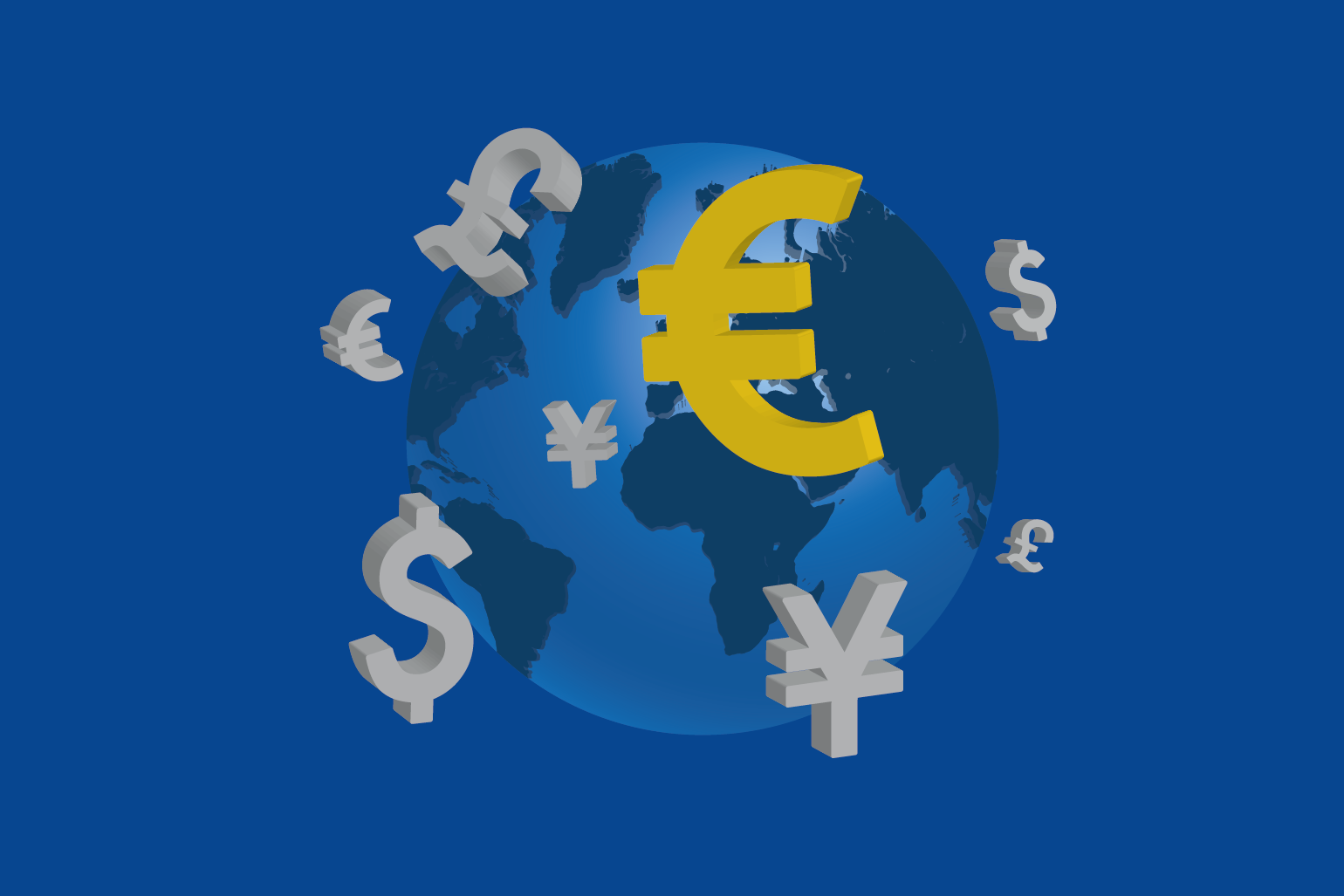 At the ESM, we have long been in favour of strengthening the international role of the euro. A more prominent international role for the common currency would benefit the euro area and its citizens by ensuring more stable financing conditions and attracting more investors. It would help to finance the recovery after the current pandemic and make our economy fitter for the future. A greater global role of the euro would also lend greater stability to the international financial system as a whole.

European Union (EU) policymakers have recognised the strategic importance of the topic, placing it high on the agenda of the upcoming March Euro summit. In addition, the European Commission has highlighted the need for more geo-political financial sovereignty. We contributed to the debate with a recently published discussion paper that takes a closer look at global financial developments.

The international monetary and financial system is slowly moving towards a ‘multipolar’ structure. This is a welcome development that reduces risks associated with an excessive reliance on the United States (US) dollar.  A more diversified mix of currencies can reduce this dependence.

The European Central Bank’s latest report showed that the euro is a strong second to the dollar, but we must ensure it continues to play an important role in a changing environment. In the face of the dollar’s dominance, China is determined to elevate the renminbi globally and other emerging markets are also on the rise. At the same time, new digital means of payment could also have substantial implications for both monetary and financial stability.

The euro can play a greater role

The euro is well placed to play a stronger international role, as it is backed by a large economic area, well-advanced financial markets, relatively low currency volatility, and an independent central bank with a clear price stability mandate and a prohibition of monetising government deficits.

Countries that export goods in euros have economic incentives to manage their financial assets and liabilities in euros. Furthermore, the euro area is both an investment destination and a home to global institutional investors, who can foster the global use of the euro. Despite these advantageous features, diversification away from the US dollar has only helped the euro to a limited extent so far. The dollar’s predominance remains well established in foreign exchange transactions and debt issuance, as well as central bank reserve holdings.

Strengthening the euro area economy, ensuring the stability of the financial system, as well as improving the liquidity of euro-denominated financial markets can help to elevate the euro’s international status. In addition, the international euro has to be underpinned by credible euro area institutions that ensure stability.

Figure: The euro is the world’s second most important currency

(Global share of the US dollar and the euro in %) 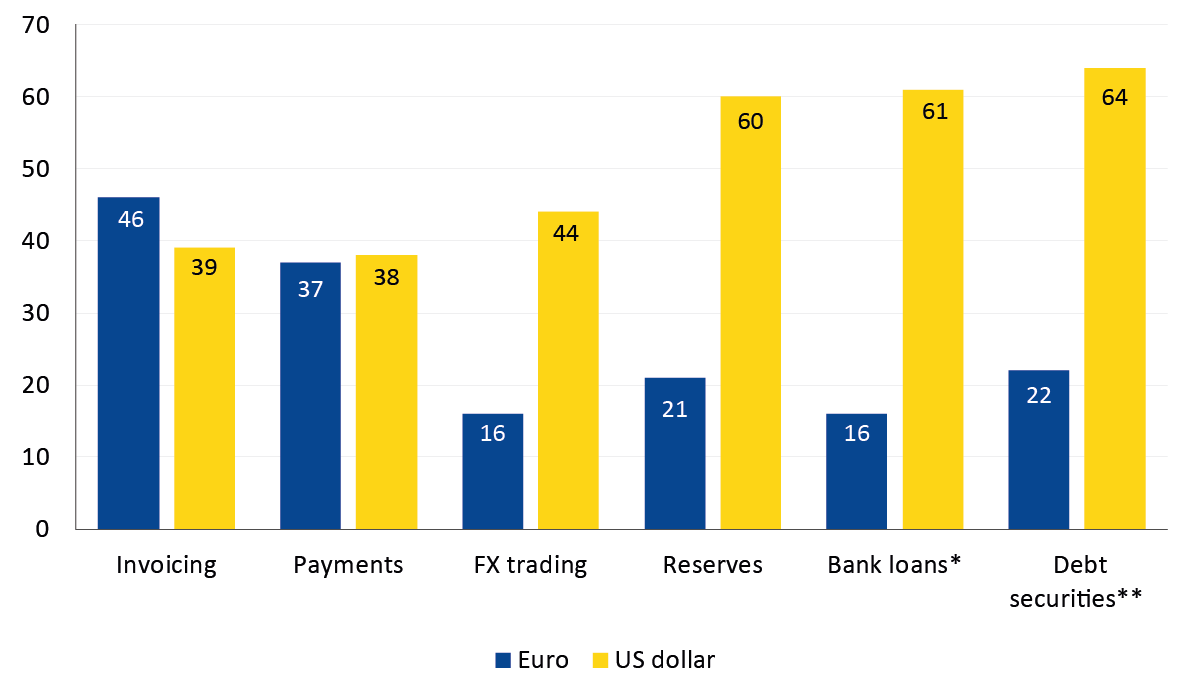 Notes: *Bank loans include cross-border loans denominated in a foreign currency (i.e. currencies foreign to bank location country); **Debt securities include securities that are issued in a currency other than that of the borrower’s residency.
Sources: Invoicing based on Boz et al. (2020); Payments based on Swift via Bloomberg Finance L.P.; FX trading, bank loans, and international debt securities based on Bank for International Settlements (BIS); Reserves based on the International Monetary Fund’s (IMF) Cofer, latest available data

Steps taken by the EU to address the Covid-19 crisis support the euro’s position in the world. The swift and comprehensive EU response to the crisis, including the adaptation of the first support package and Next Generation EU, has demonstrated the EU’s solidarity and cooperation and helped to convince international investors of the EU’s structural strength. The recovery plans must now be delivered to uphold this trust.

The Recovery and Resilience Facility will expand the pool of euro-denominated safe assets that can become an anchor to euro-denominated debt markets for an extended time period. The combined stock of bonds issued prior to the pandemic by the EFSF/ESM, the European Investment Bank, and the EU amounted to €800 billion worth of European safe assets. This could increase to €2 trillion in the next few years.

The euro’s position will also draw strength from enhanced crisis management, thanks to the ESM’s new role as a backstop for the Single Resolution Fund, and from the focus of the recovery package on digital transformation and green finance. This digital and green transformation of our economies will require heavy investments but will provide ample opportunities for future growth. These domestic European efforts to strengthen the economy will push forward the internationalisation of the euro.

Nevertheless, much work remains. We need to address the fragmentation of Europe’s financial and capital markets to improve their depth, liquidity and stability.

To increase investors’ confidence in the euro, it is essential to enhance euro area financial stability by further deepening Economic and Monetary Union and completing banking union with a common deposit insurance scheme. In the long run, a central fiscal capacity for macroeconomic stabilisation would also instil confidence in the euro.

In addition, we need substantive progress towards capital market union. An increasingly important goal since the United Kingdom (UK), until now the gateway to Europe for capital, left the EU. In the wake of Brexit, European capital markets need to increase their openness to, and attractiveness for, international capital. As explained in a previous blog post, a significant strengthening of European capital market supervision would be a game changer in this respect.

Similarly, we will need bold steps to facilitate securitisation, support equity finance and improve market access for small firms. These steps are crucial for expanding the size of euro-denominated financial markets and for enhancing integration.

Lastly, we need to enhance the safety of the market infrastructure and improve regulatory transparency to foster euro-denominated capital markets. For instance, a more efficient debt distribution infrastructure would help euro-denominated debt issuance. A safe digital infrastructure, which could eventually also include a digital euro, would further strengthen the international role of the euro through increased efficiency of payments.

Global benefits of a stronger euro

We are likely to see the emergence of a more diverse mix of global currencies, with a wider use of the euro, which would allow investors to diversify their portfolios and render the overall system more resilient and less risky.

Safeguarding financial stability is at the heart of the ESM’s mandate and we believe that a stronger euro, underpinned by a solid banking and capital markets union, would not only be advantageous for the euro area but also for the world at large.