By leaving the European single market on New Year's Day, the United Kingdom concluded a chapter first opened four and a half years earlier. At the time, the outcome of the Brexit referendum caught capital market participants by surprise, leaving them wondering whether the European Union (EU) would further dissolve or if European solidarity and integration would continue. Yet market sentiment quickly swung positive: by staying united in the first few weeks after the Brexit referendum, the EU calmed markets.

In this blog post, we track market responses in the weeks before and after the Brexit vote as well as in the first week of January 2021 when the EU-UK agreement entered into force. It reveals that market tension has never again reached the peaks attained back in 2016, not even during the current pandemic or when the UK left the single market earlier this year. Instead, tensions eased soon after it became clear that the EU would remain intact despite losing one member – testimony to the strength of a united Europe.

These correlations are visible in heatmaps. Each heatmap cell displays a pairwise correlation, from 1 (dark blue, prices tend to move in the same direction) to -1 (dark red, prices tend to move in opposite directions) over a period of one week. In other words, the bluer the heatmap, the calmer the market sentiment, as bond prices are moving in the same direction. Conversely, if the heatmaps show a lot of red, prices are moving in different directions. This means that there is a flight-to-safety away from one group of bonds to another, a sign of negative market sentiment.

Heatmap 1 shows the bond market correlations in the six weeks around the Brexit referendum in 2016. It includes the generic 10-year bonds of euro area countries with liquid bond markets plus three issuers with a particularly strong connection to the euro area: the ESM, the United Kingdom (UK), and Switzerland.

The following week, the situation changes, as some polls indicate a possible victory for the Leave campaign.The periphery countries’ correlations with Germany, the Netherlands, and Finland turn slightly negative (Heatmap 1B). 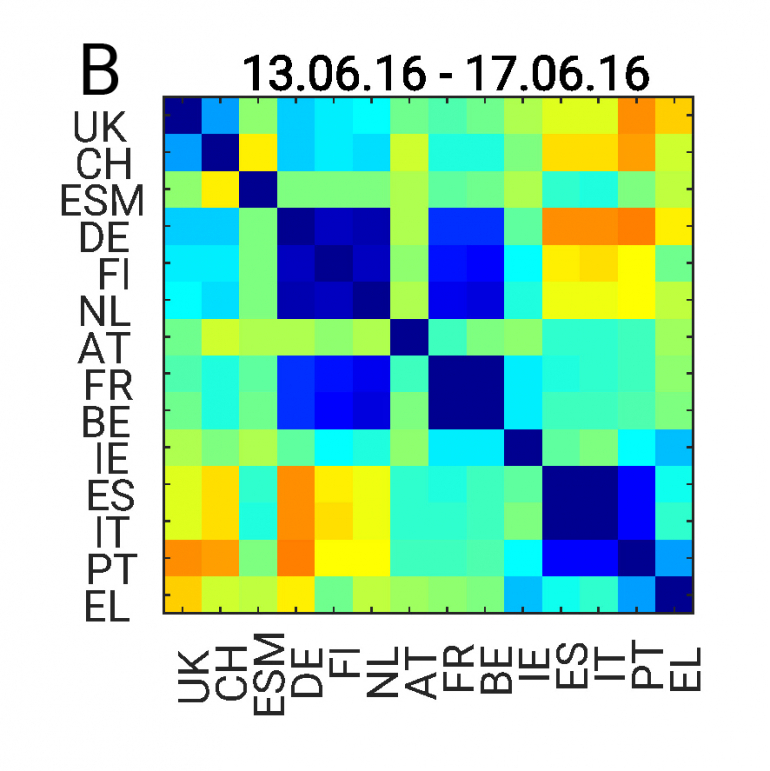 In the week of the referendum itself, these patterns, triggered by sceptical investors, become strong and dominant. The correlations inside the groups are almost 1, while those between the groups are below -0.8 (Heatmap 1C). Such ‘flight-to-safety’ patterns occur when investors consider selling bonds they regard as risky, such as those from the periphery, and instead invest the money in bonds from the core group that are seen as safer. Surprisingly, the UK, as well as Switzerland, joined the core group indicating that market participants do not see any substantial negative credit effect of the referendum on the UK. Similarly, they do not show signs of nervousness when the UK is subsequently downgraded by the main rating agencies. 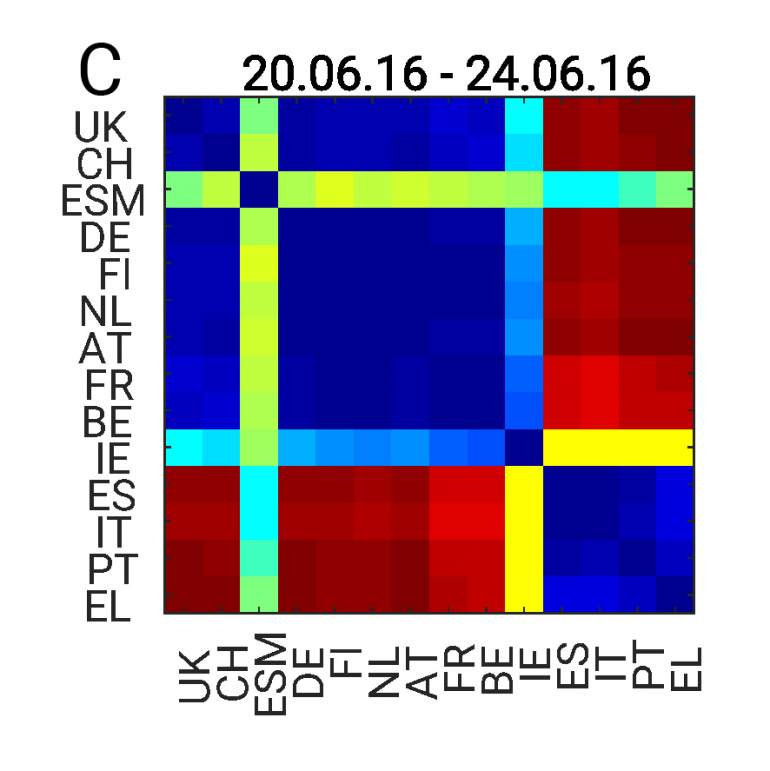 Fortunately, market sentiment regarding the euro area’s financial stability quickly turns more positive. In the first week after the referendum, the EU signals strength and unity: at the monetary level, the ECB indicates that it is considering loosening the rules for its bond purchase programme, which will particularly support the bond markets of the euro area periphery (Heatmap 1D). 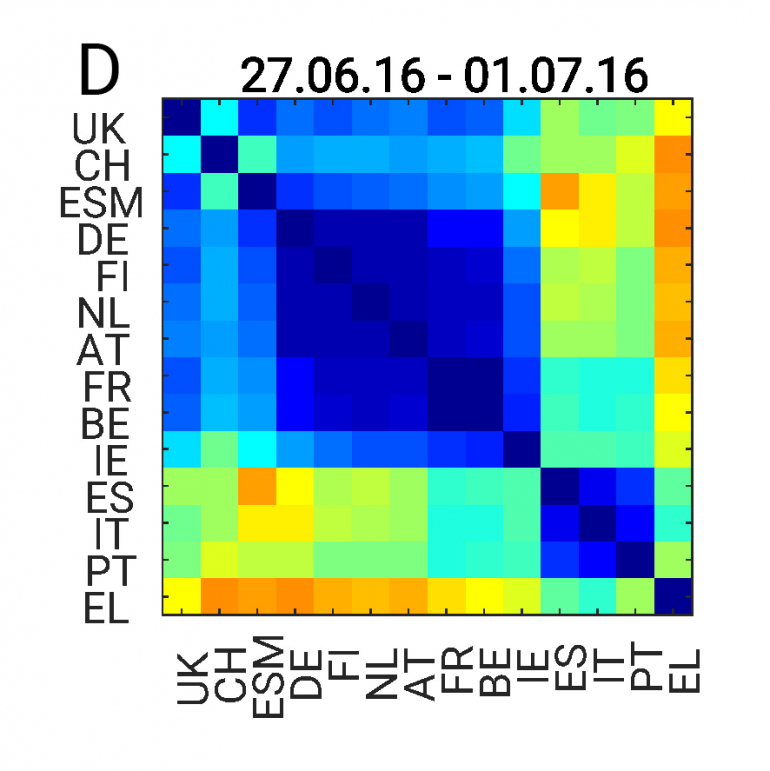 The following week, at the political level, European Council President Donald Tusk says that no other countries will consider leaving the EU: the Brexit referendum is just an idiosyncratic event (Heatmap 1E). 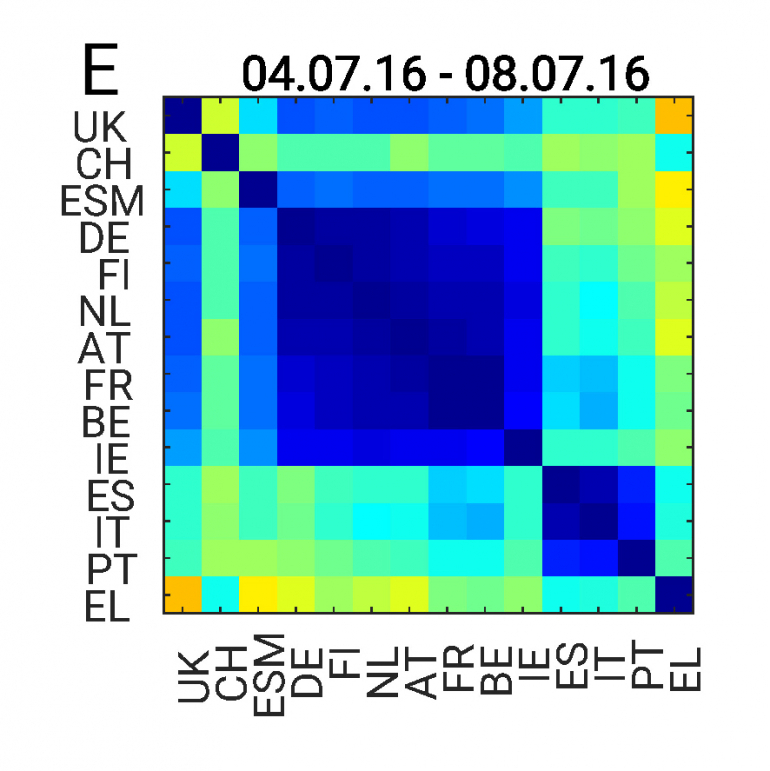 And in the third week, at the economic level, Moody’s says that they are only seeing a minor economic impact of a Brexit on EU economies (Heatmap 1F). 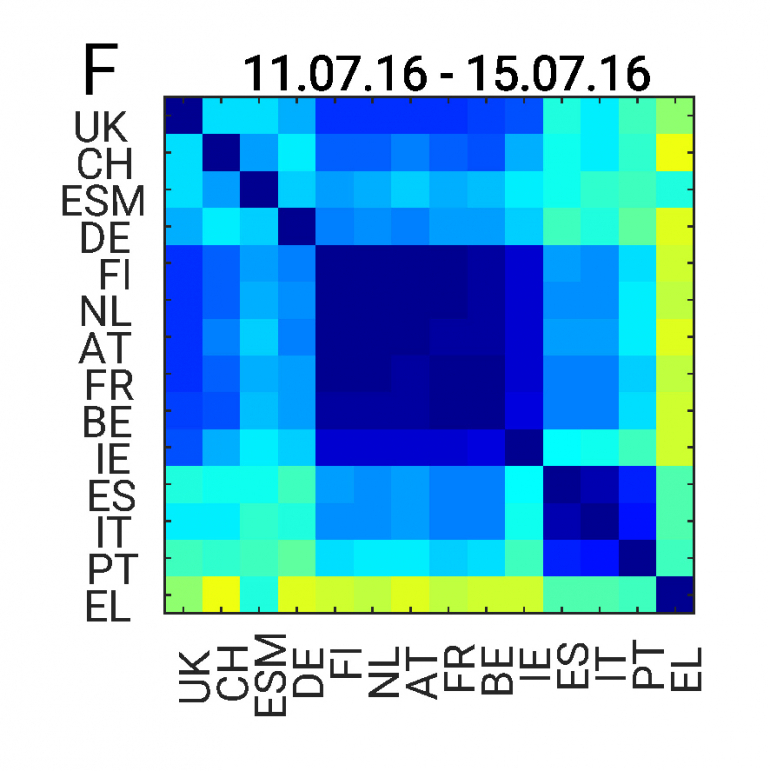 If we look at the picture in June 2020, four years after the Brexit referendum, we can see that all euro area bonds positively correlate (Heatmap 2). Markets seem to believe the euro area has become more robust, thanks to the measures countries and institutions have taken to stabilise economies. This is particularly due to the swift European pandemic responses which included an extension of the debt purchasing programme (PEPP) by the European Central Bank and support measures by the European Commission, the European Investment Bank and the ESM. 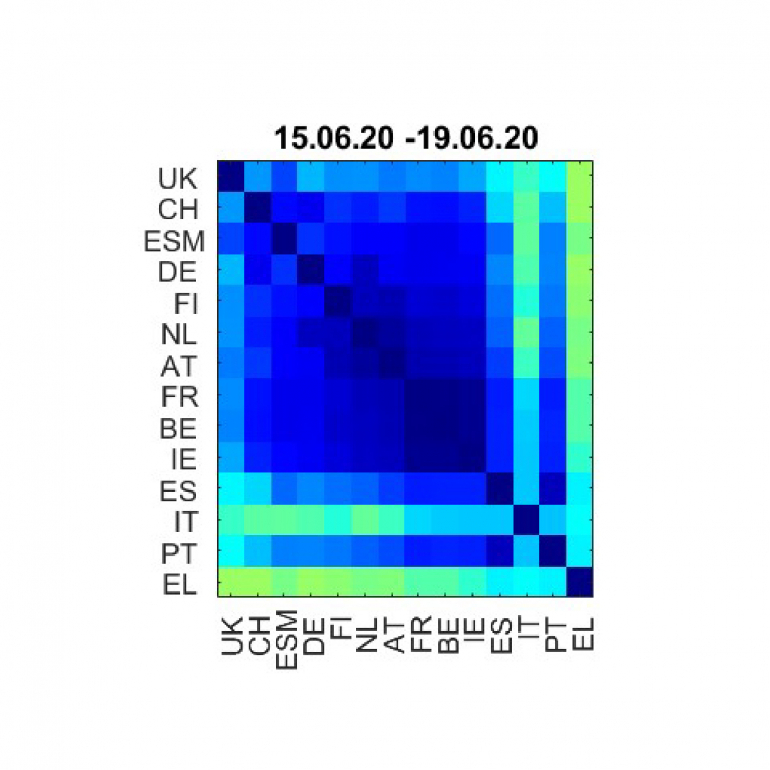 More recently, the departure of the UK from the European single market on 31 December 2020 did not affect market sentiment either (Heatmap 3). This further demonstrates that the markets are more positive about the euro area today than they were in 2016 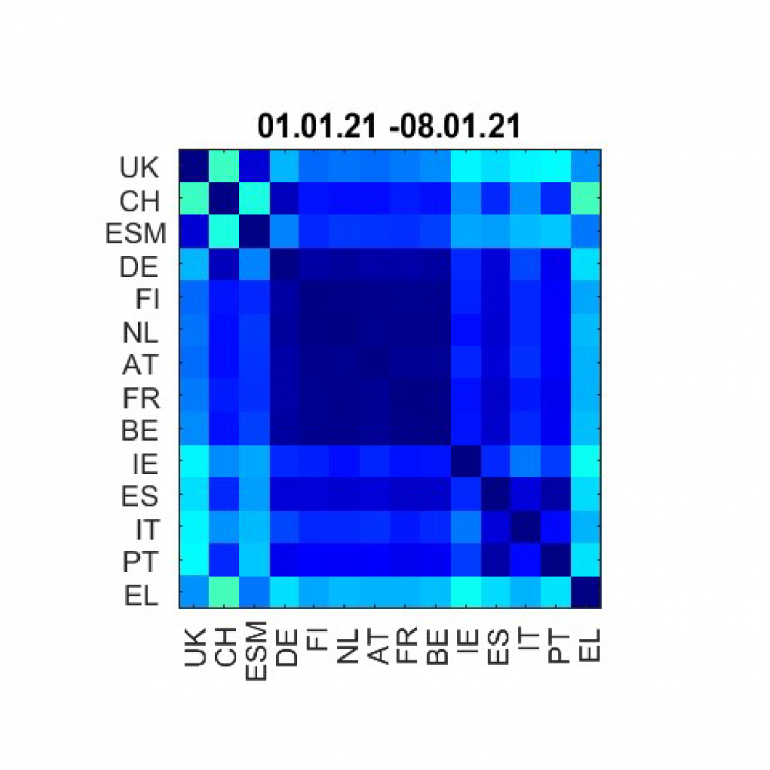 This correlation approach is a good way of measuring shifts in market sentiment due to specific events. This is because bond price changes are mainly triggered by automated quotes which bond market makers use to ensure they do not lose out to external traders with access to all public market information. Market maker quotes, therefore, need to include current market information, even information inferred from other markets. These ‘cross-sectional’ quotation models therefore highlight correlation patterns as shown in the heatmaps.

The main advantage of this approach is that it can detect changes in market sentiment before larger, more obvious market movements such as spread widenings, making these heatmaps useful early-warning indicators of market sentiment changes. While we have chosen the 2016 Brexit referendum as an example here, the model can of course be applied to many types of market-moving events.