A backstop to the Single Resolution Fund now! 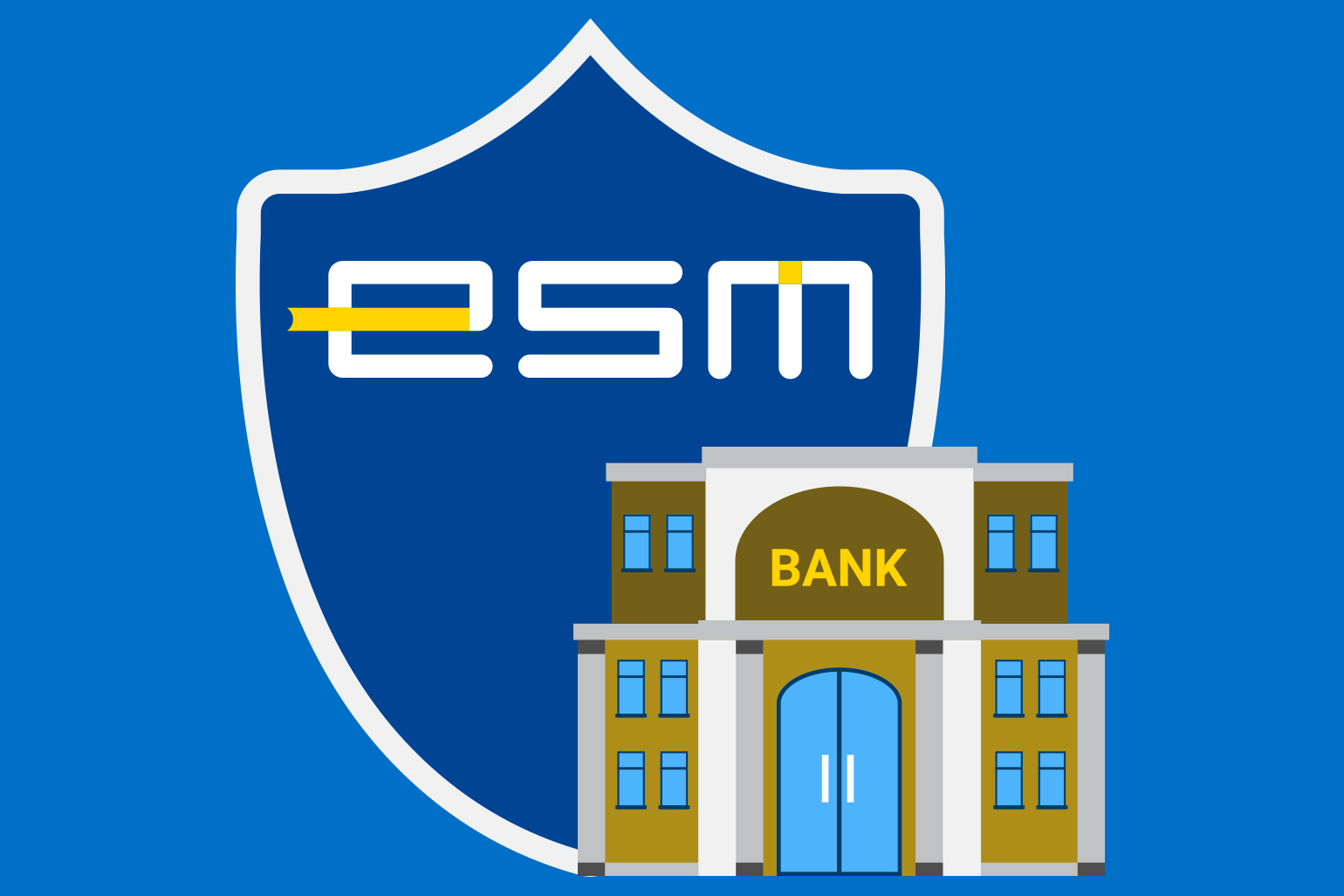 On Monday, euro area ministers of finance agreed to proceed with the reform of the ESM, to sign the revised Treaty in January 2021 and to launch the ratification process. They also agreed to advance the introduction of the ESM’s common backstop to the Single Resolution Fund (SRF) by the beginning of 2022. This is especially important at a time when the pandemic has stalled improvements to banks’ health that followed the euro crisis. In this post, we argue that although banks emerged better equipped from the last crisis, their residual vulnerabilities, combined with the effect of the pandemic, confirm the benefits of a swift implementation of the backstop.

Banks are in a better position than during the euro crisis…

Banks were better prepared for a downturn. Policymakers and banking supervisors learned from the past crisis, tightened up the regulatory toolkit and set the right system of rules and incentives to make banks develop their risk management capabilities and decrease their risks. Banks have been increasing their capital cushions; levels are, on average, higher than ever (Figure 1). The average Common Equity Tier 1 (CET1)[1] ratio observed in the second quarter of 2020 is around 14.6%, significantly higher than the 10.6% average requirement set by the supervisor at the end of 2019. 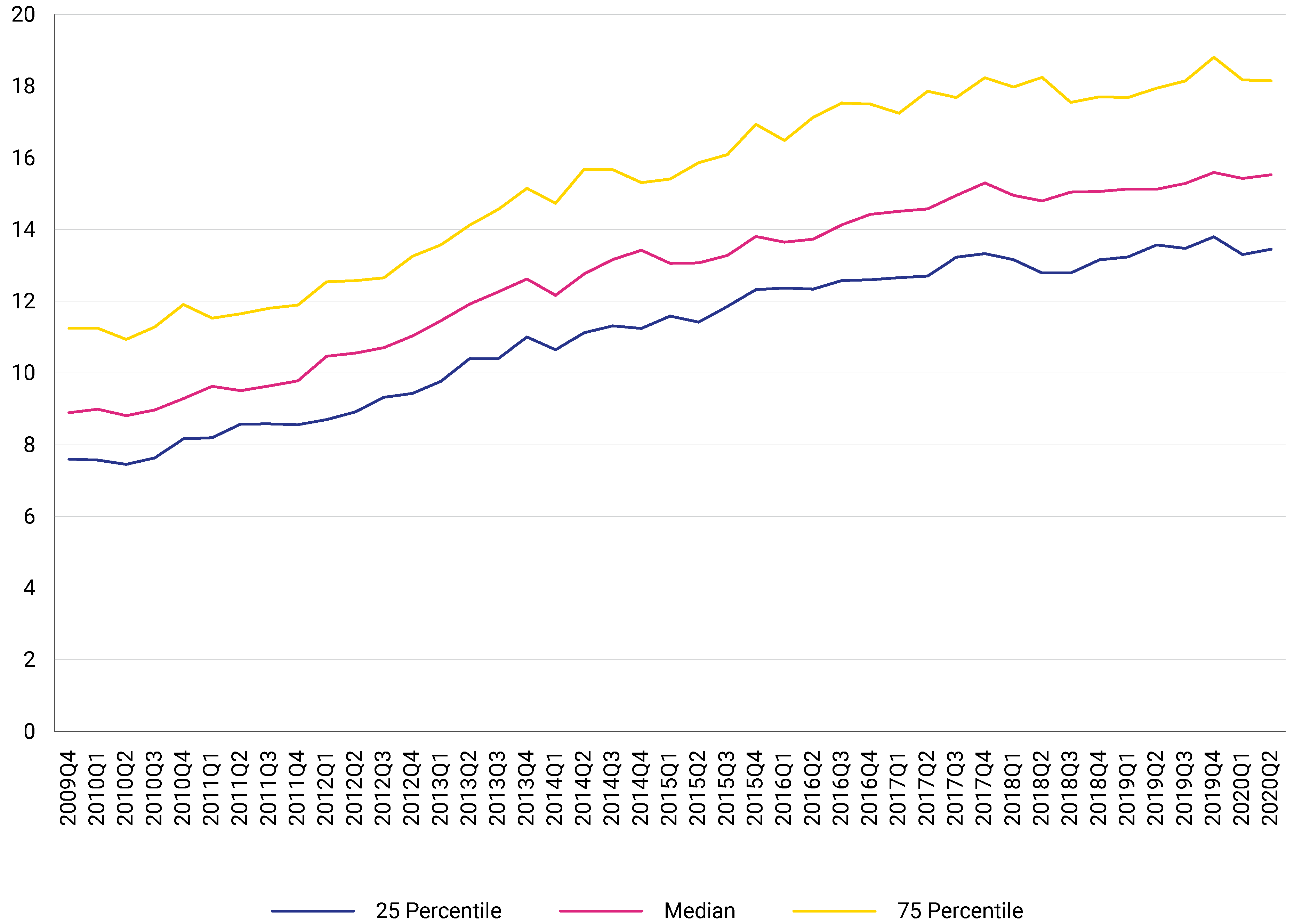 Banks in the banking union have also improved the quality of their assets since the last crisis (Figure 2). Non-performing loans (NPLs), a burden on bank health and growth capacity, have significantly decreased since their peak. The biggest improvement came from those banks with the highest NPL ratios. The median level of NPLs for the largest banks in the euro area was around 3% in the second quarter of 2020 and all banks have come closer to this value. 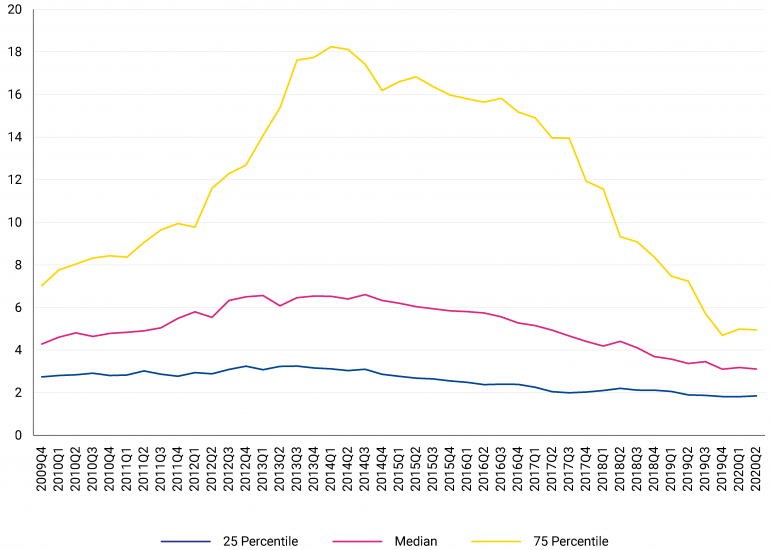 Moving supervision and resolution to the European level helped ensure a level playing field and address the potential cross-border effects of bank failures. Additionally, the new regulatory framework requires investors to contribute to bank resolutions and restructuring, sharing more of the costs of a bank failure than in the past and providing comfort to all citizens that their money will no longer be used to rescue banks that embarked on risky affairs.

…governments and authorities reacted to the pandemic swiftly and effectively …

Governments and regulators enacted regulatory flexibility and state support to soften the impact and delay the recognition of losses. These measures have allowed banks to support the economy during the pandemic and beyond. The measures have helped non-financial corporations (NFCs) and especially small- and medium-sized enterprises (SMEs) (Figure 3).

Figure 3: Moratoria and public guarantees provided breathing space to banks and borrowers but upon expiry, proportional increases in default events are expected (Percentage of loans under support) 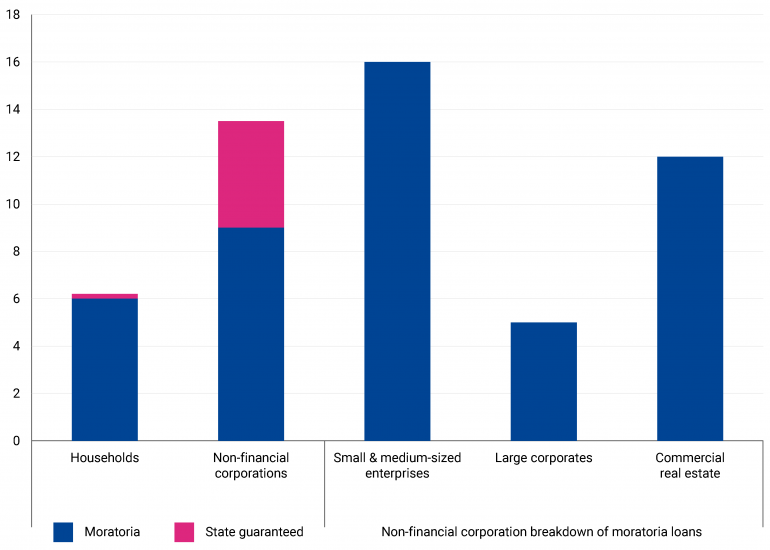 … but banks will face difficulties in the aftermath of this pandemic

Not all banks will exit the current crisis in good shape. In the first half of 2020, banks’ multi-year declining trend in NPLs stopped and the cost of risk began rising (Figure 4) as more loans showed significant signs of quality deterioration. Despite a massive range of support measures, the increased cost of risk[2] in the banks’ books clearly indicates that banks will see NPLs increase once moratoria and state guarantees expire.

Figure 4: Several indicators are already pointing towards a deterioration in asset quality: the cost of risk has sharply increased and shows wide dispersion across banks (Cost of risk, euro area banks) 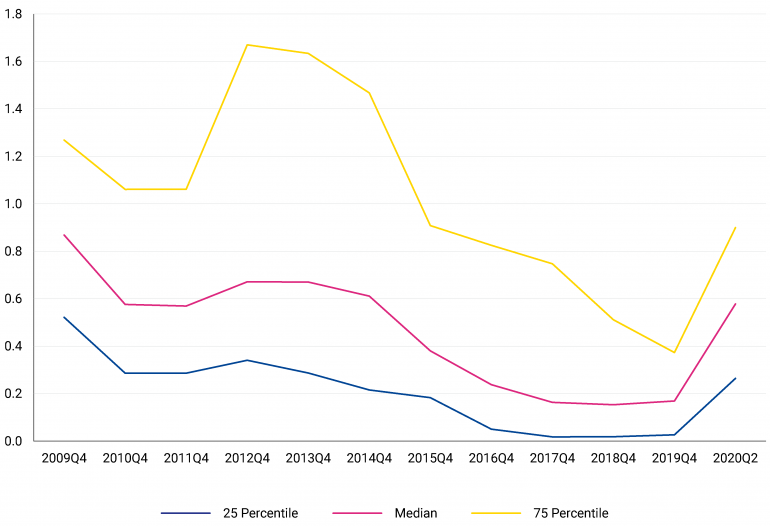 Market prices reflect uncertainty over banks’ outlook. Prices plummeted following the outbreak of the pandemic and have only partially recovered as news about vaccine trials emerged in November. The market value[3] for publicly traded banks is, on average, 32% below the prices at the beginning of 2020. This implies that investors expect banks to earn no profits and some banks to raise capital in the near future.

When comparing the market value of a bank’s shares to its book value[4] (Figure 5), it becomes evident that market participants expect euro area banks to have to write down some of their assets and yield very little profitability. For some banks now trading at very low multiples of their earnings, it seems that the market expects recapitalisations or resolutions. According to the vulnerability analyses conducted by the European Central Bank and based on scenario simulations by several institutions, banking sectors overall look healthy but a number of banks might experience capital shortfalls if an adverse economic scenario materialises. This scenario is now becoming less likely as vaccines may be deployed next year, but cannot be excluded.

Figure 5: Euro area banks will continue to yield little value according to market expectations, some may be in need of support (Price-to-book ratio SX7E) 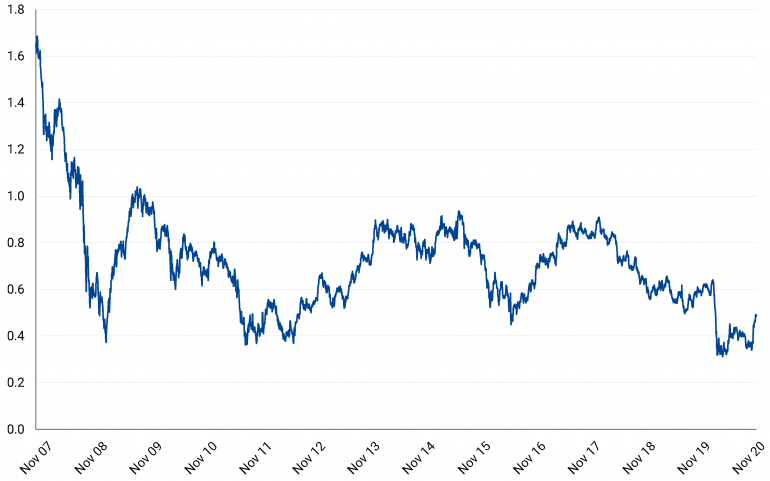 This stress on banks comes as banking union remains incomplete and banks have yet to finish implementing the agreed rules, such as the Minimum Requirement for own funds and Eligible Liabilities (MREL)[5], to strengthen their loss absorption capacity and be better prepared for a resolution without needing to draw on the SRF (Figure 6).

Figure 6: Banks’ progress in planning for failure: still some way to go (Number of banks by year when their MREL transition ends for non-global systemically important institutions) 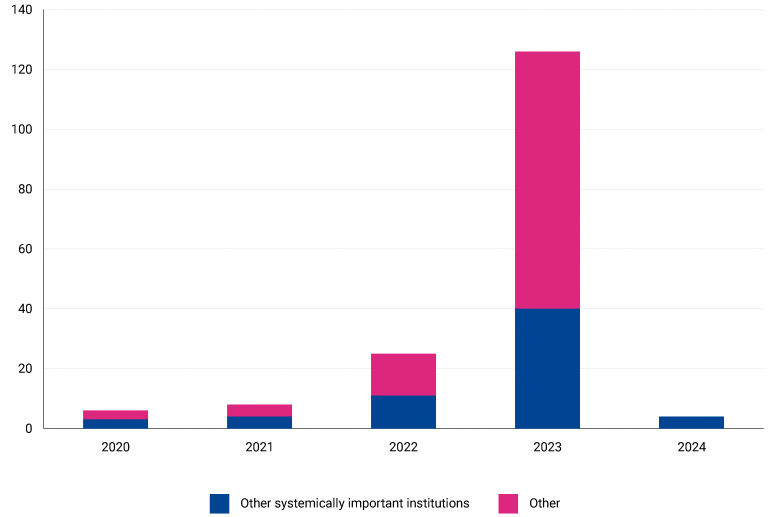 In the meantime, policymakers have agreed on the earlier introduction of the common backstop and are putting further effort into advancing banking union for a safer and more growth-oriented banking system. Further important reforms are needed to complete the crisis management framework, allow for a more efficient allocation of resources, and strengthen protection for all depositors.

The benefits of implementing the backstop now

The ESM is well equipped to act as the SRF’s safeguard, given its strong market presence and experience issuing bonds in a crisis. The new tool will start operating at the beginning of 2022 after a successful ratification process in all euro area member states.

The ESM’s new lending facility under the common backstop framework introduces a novel arrangement in the ESM armoury, which allows the ESM to finance an EU institution. It replaces the old ESM tool for dealing with bank failures – the Direct Recapitalisation Instrument – that was devised at the height of the euro area crisis when banking union was still in its infancy and bank resolution bodies were not yet in place.

The ESM backstop will double the resources for bank resolution (1% of covered deposits with a cap of €68 billion) and ensure their immediate availability. Whether called upon or not, this safeguard can reassure markets. Its mere existence will block contagion, which is particularly important when many banks suffer in tandem.

The backstop will better shield governments from being forced to rescue failing banks, causing major disruption to their economies. Although it is tricky to draw parallels between crises, the last one saw governments inject around €360 billion into banks’ capital over the ten years following the crisis, thus excluding asset relief interventions and guarantees (amounting to an additional €3.5 trillion in state aid).

The backstop is operationally simpler than the bridge financing from domestic sources it replaces, which is prone to amplifying national divergences. It also has the benefit of being fiscally neutral to all member states and its taxpayers since funds will be fully recouped from the banking sector itself.

The new tool better suits current regulation and the overall banking union architecture, while also avoiding the use of taxpayers’ money and more efficiently decoupling the damaging sovereign-bank link.

Towards a stronger banking union

We now are experiencing one of the most severe economic crises in modern history. The Eurogroup has decided to take another step to safeguard stability and address the scars of the crisis. Once member states complete the ratification process, the common backstop will be immediately available as all the operational and legal arrangements have been predefined among the institutions.

The backstop is a fundamental milestone in the euro area banking union. Banking union has so far been successful in securing a safer and more stable banking sector. Its completion will yield a stronger safety net, a well-funded and encompassing regime for orderly resolutions, and deeper integration. This means banks will become more efficient and even safer, a crucial element in coping with repercussions from the pandemic and the ensuing recovery phase.

Common Equity Tier 1 capital (CET1) is the highest quality of regulatory capital, as it absorbs losses immediately when they occur; it is primarily composed of common shares, stock surplus and retained earnings.

The cost of risk is a cost component of banks’ profit and loss accounts and measures the increase in the expected loan losses on the loan portfolio in the reporting period.

The market value of a company is its share price multiplied by the number of outstanding shares. We refer to the index EURO STOXX Banks (SX7E index).

Known as the price-to-book ratio. The book value is the value of a business according to its books (accounts/financial statements). It is calculated from the assets of a firm once deducted its liabilities and intangibles as reflected in its financial statements.

MREL criteria require banks to have enough resources, equity, and non-preferred debt to absorb losses and minimise the risk of government bail-out.