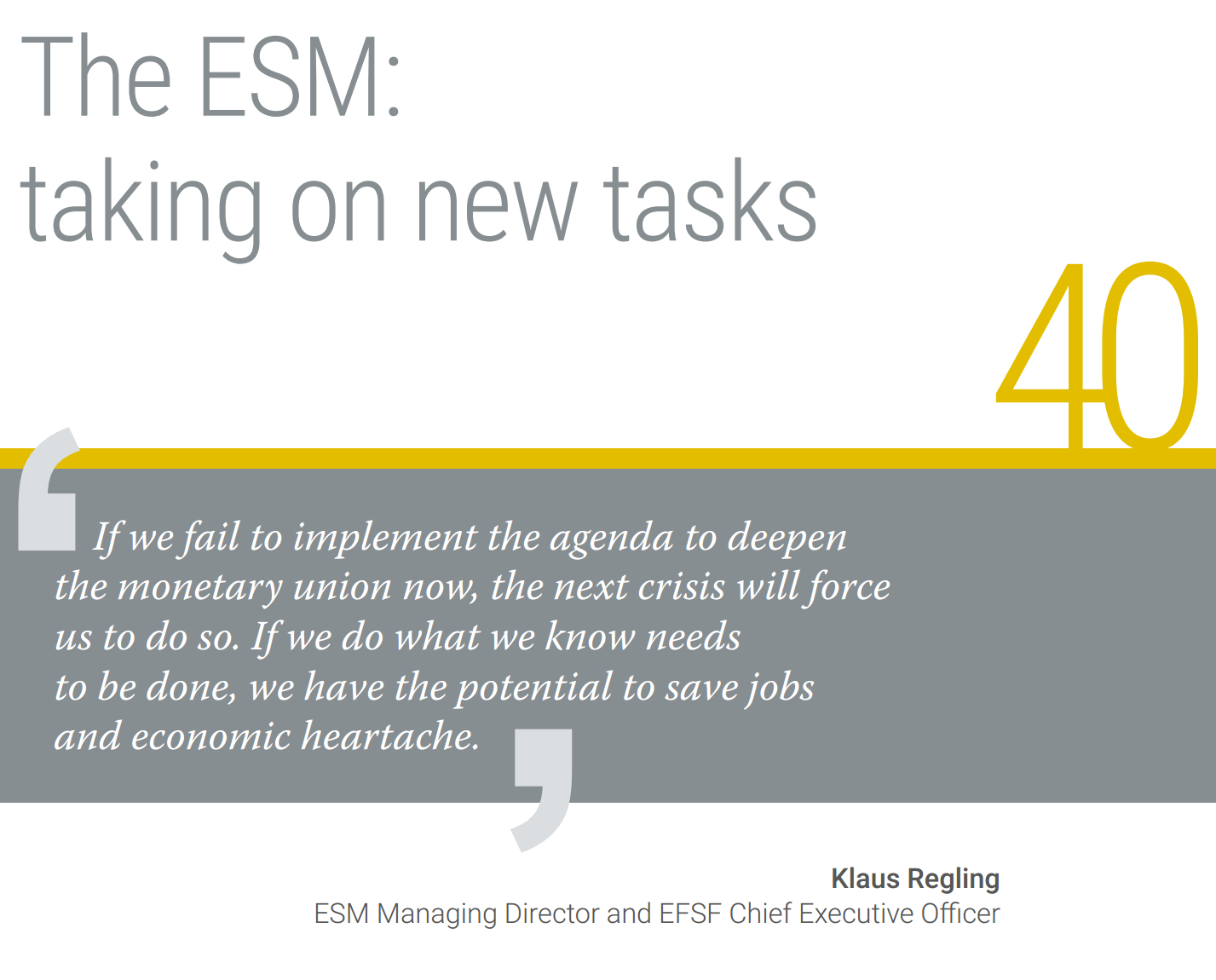 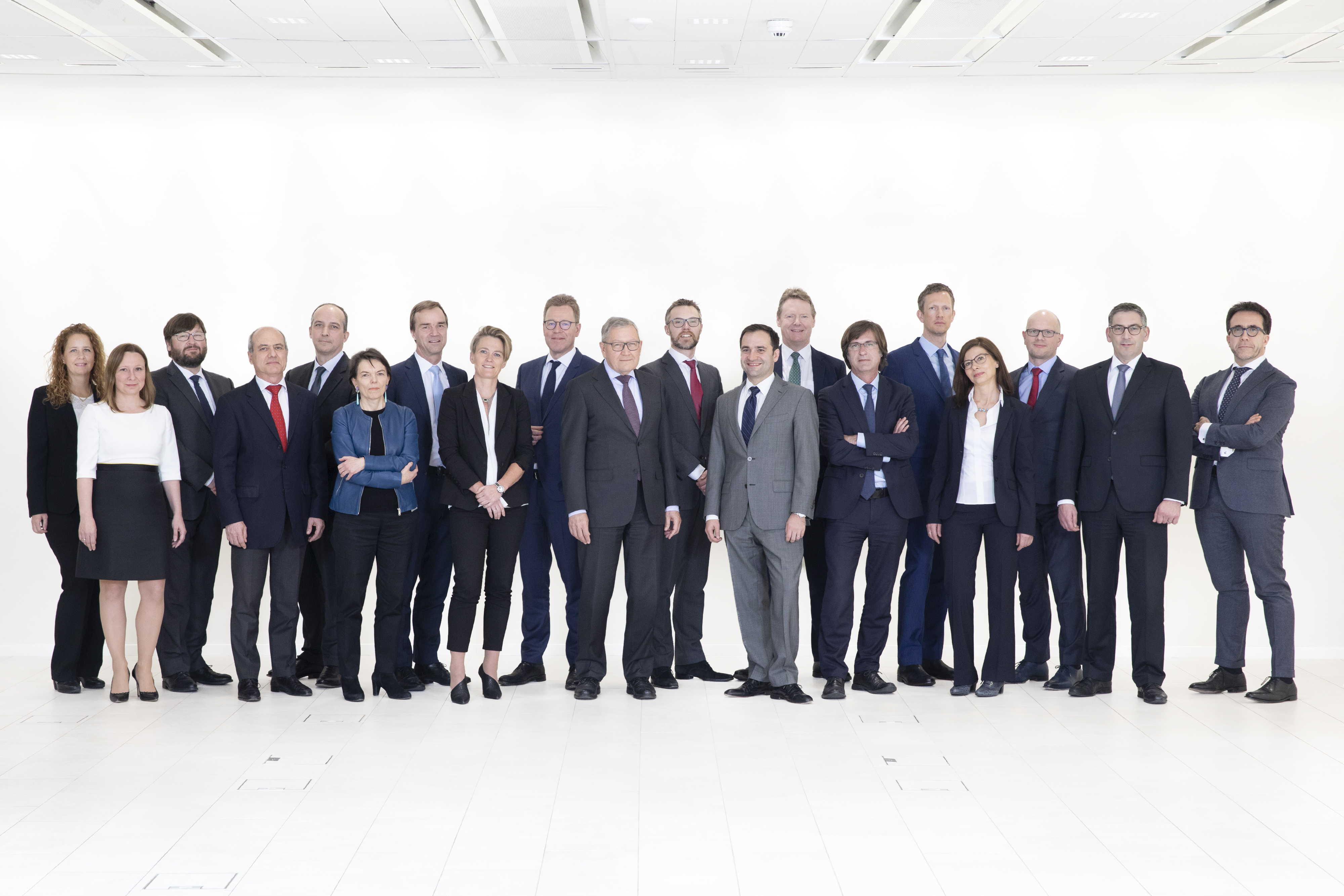 ESM management board and heads of division
Credit: Steve Eastwood/ESM
Taken together, all these developments will strengthen the euro area and its firewall, and set the stage for future considerations.‘This is part of a wider debate about fiscal risk sharing,’ Regling said during a July 2018 workshop at the ECB[9]. While controversial, there is also talk about common area fiscal tools such as a rainy-day fund or a joint fund for investments. These are all linked to discussions about a possible future sovereign debt restructuring framework, which would make settlements with private creditors more transparent and more predictable. The ESM could play a constructive role by providing debt sustainability analyses and by facilitating talks between creditors and debtors. ‘In my view, we don’t need to have a more rigid approach but a more transparent one,’ he said.‘ And the ESM can play a role in such a framework.’
The December 2018 decisions will allow the euro area to make the most of the strength it built during the crisis years. Even so, there remains room for the ESM, and the euro area’s overall architecture, to develop further. To prepare, the euro area has embarked on an ambitious period of reflection and change. The monetary union’s recent achievements are significant, but the euro area’s defence system is still not as solid as it could be. Those who lived through the crisis negotiations know the euro area would be better served if the remaining deficiencies were fixed now, rather than when the next crisis hits. This includes building public support for euro area reforms, as well as designing better rules and sturdier safeguards.
‘Our Economic and Monetary Union remains incomplete. There is a need to consolidate and complement the unprecedented measures we took during the crisis and make them more socially and democratically legitimate,’ said European Commission President Juncker.
The ESM has plenty to do in the meantime. The firewall must continue to manage the financing and repayment of the rescue programmes that took place, and it must consider how best to rebalance its workforce as it takes stock of its expanded mandate. The ESM also will continue to develop its investment and funding side, and to adjust its workforce to best handle the fund’s ongoing duties.
‘We have to prepare for a steady-state period where there is less excitement, more routine work,’ Regling said.
From the outset, the ESM has been mindful of attracting a diverse range of investors and it is constantly looking for ways to tap new funding sources. It has added private placements and non-euro issuance to the regular presence with liquid euro benchmarks. These are needed not only to keep up with their current liquidity needs, but also so that the ESM can offer a new programme at a moment’s notice. ‘We are a crisis mechanism,’ said Ruhl, ESM head of funding and investor relations. ‘We have to be ready and able to act in difficult market situations to raise additional money.’
The investment team aims to expand its capacity by making use of additional financial instruments, such as non-euro assets and short money market futures. The team also continuously aims to refine its asset allocation and benchmarking to improve the quality of its asset management. In parallel, it participates in discussions with shareholders to explore potential framework revisions, to increase the ESM’s long-term investment performance. Finally, the team is adjusting to ongoing changes: the reduced liquidity of the European bond market requires improved monitoring of market conditions; the development of responsible investment may lead to the introduction of new investment principles, and; regulatory changes, such as the revision of Libor rates, lead to the adaptation of existing instruments and contracts.
‘Our responsibility to our shareholders is to make the most of the funds we manage, within a tight framework,’ said Frankel, ESM deputy managing director and CFO. ‘We don’t want to shut ourselves off from opportunities by not having the right product mix.’
Given its crisis experience, the ESM is now better placed than ever to monitor all of the countries that received financing support during the crisis, to make sure they can repay their loans as agreed, and to assist in the euro area’s efforts to protect the monetary union from future shocks. This reflects the institution’s growth since its inception on the way to its current maturity.

Managing Director Klaus Regling and the ESM staff at the fund's fifth anniversary. The team is ready to take on new mandates following the December 2018 euro summit
Credit: Steve Eastwood/ESM
‘It has earned its credibility,’ said Malta’s Camilleri. ‘The ESM is an institution which is alive and kicking, quite dynamic, and it is growing over time. Initially its participation in certain negotiations was substantially less than it is now. Its presence is much more visible now.’
The rescue fund fits in a broader framework of strengthening growth, increasing resiliency and protecting against future shocks, said Dijsselbloem, former chairman of the ESM Board of Governors and former Dutch finance minister. ‘All that would make it less likely that ESM programmes are needed again anytime soon,’ he said. ‘However, as crises do happen in our economic system, it is good to know that the ESM is the euro area’s stability anchor – an anchor the euro area will always be able to rely on.’
One day, the ESM may be fully integrated in the EU framework, through an amendment of the EU treaties. Like the EIB, the ESM could have its own protocol within the EU Treaty, while also keeping its capital and key features of its governance structure. In the meantime, the firewall will continue to strengthen and improve, in order to fulfil all of the missions its Members have envisaged.
‘The ESM’s place is in the EU treaties and I’m sure that one day it will be,’ said Regling. ‘Although we are intergovernmental for the time being, at our core, we are an EU institution. Created by a great showing of European solidarity, we are one of the Union’s key defences and will remain so for the future.’ 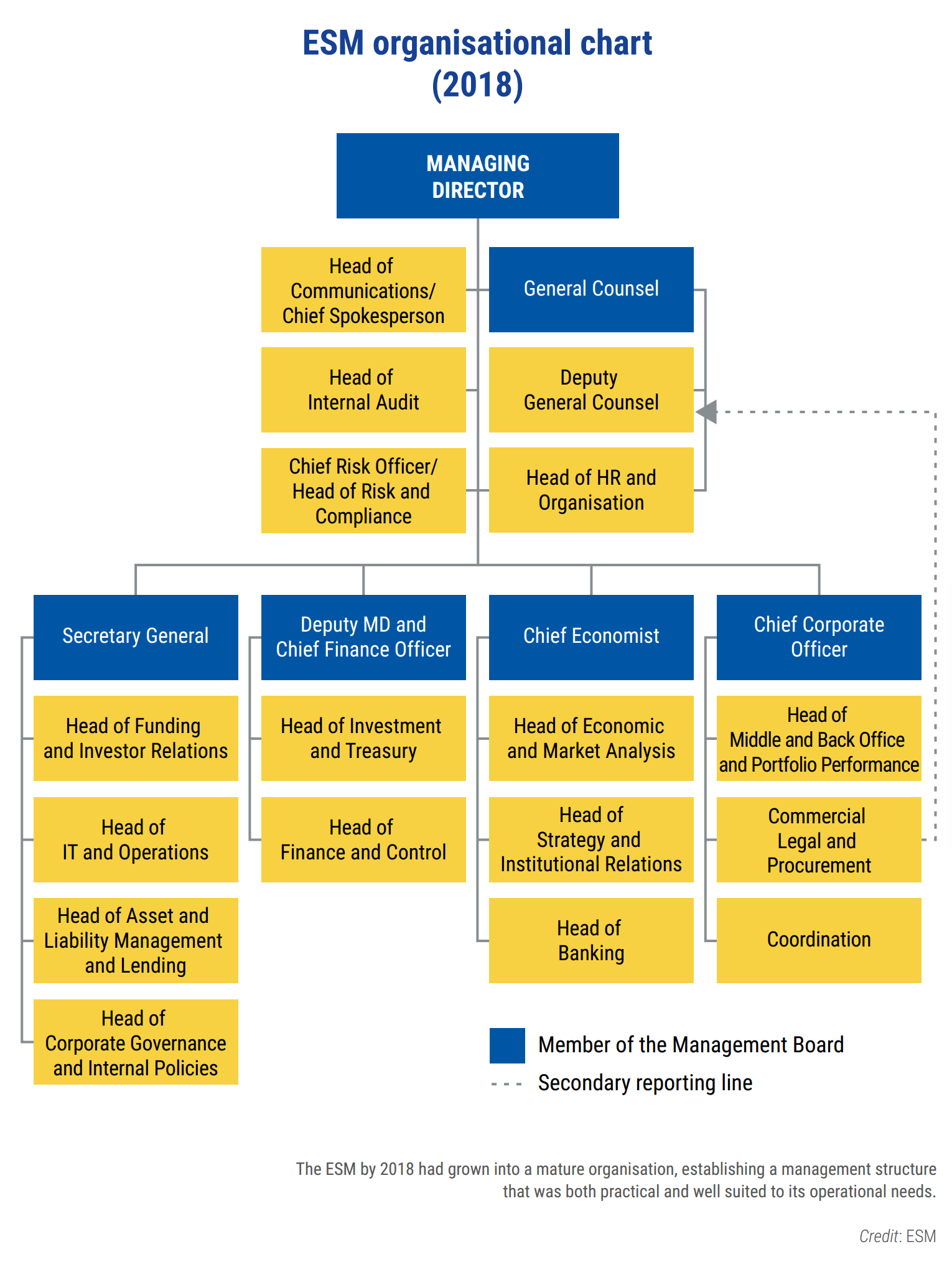