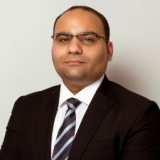 The Minister of Finance and Employment, Clyde Caruana, was appointed Minister in November 2020. An economist by training, Minister Caruana has held the position of executive chairman at the State employment agency, Jobsplus, from 2014 to 2018. More recently, he was the Prime Minister’s Chief of Staff (January 2020 - October 2020).

During his tenure at Jobsplus as Chairperson (January 2019 - October 2020), he authored several position documents and policy papers, which have been central to the government’s labour force policy. Additionally, Minister Caruana was the main driver to implement these policies and reforms most notably, related to free childcare, In-work benefits and others.

Prior to these roles, Minister Caruana worked at the National Statistics Office (August 2007 - September 2012). He also lectures in Economics, at the Faculty of Economics, Management and Accountancy at the University of Malta.

Minister Caruana has written papers and articles on the the welfare state and the labour market, as well as related research and consultancy work.

Ministry for Finance of Malta