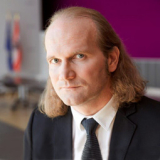 Chairperson of the EFSF Board of Directors since 8 February 2018; member of the Board Risk Committee from 9 October 2012, reappointed until 8 October 2019.

Following Harald Waiglein's graduation from university he acted as professional interpreter in the fields of Law and Economics for International Organisations and enterprises. Thereafter, for many years, he worked as an editor at the Austrian Broadcasting Corporation, where he specialised in taxation, public budget, financial markets and energy.

After holding the position of Deputy Chief Editor and Head of the Economic Department at the Austrian newspaper Wiener Zeitung for two years, in 2007 Waiglein relocated to the Ministry of Finance. There he was promoted to Director General of the DG Economic Policy and Financial Markets in July 2012. In this position he represents Austria as a Director of the ESM and EFSF, and as a member of the Economic and Financial Committee of the EU.

Ministry of Finance of Austria