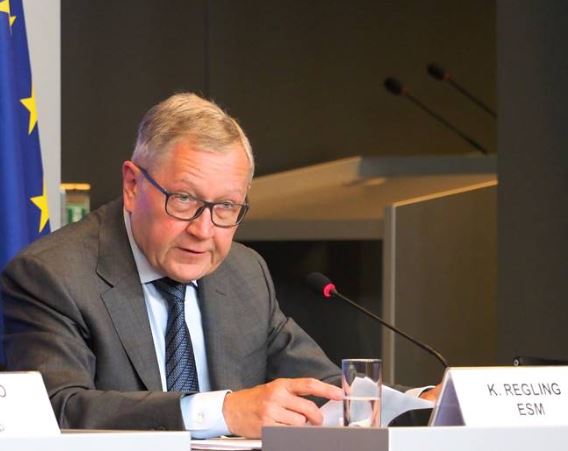 Let me start with a few words on Cyprus. You heard about Cyprus already; the ESM participates in the post-programme monitoring with our own Early Warning System, as we do it with all the five countries that received money from the EFSF and ESM. We also share the view that financial conditions in Cyprus have become quite favourable as a result of structural reforms, fiscal consolidation and the strengthening of the financial sector. Markets also look at it that way - when you look at what has been happening to the yields and the secondary bond market, spreads have come down significantly.

Also rating agencies, three out of the four rating agencies have now assigned an investment grade to Cyprus. So all that is really rather positive. It does not mean that there are not some problems. Non-performing loans (NPLs) are the second highest in the EU. And debt is also high. So sound fiscal policies need to continue. But at the moment I think everybody was quite happy. The second half of the meeting yesterday was in the enlarged Eurogroup format. Of course, I am also happy that progress was achieved on the package of deepening monetary union.

I will focus on the ESM Treaty, which obviously is of particular importance for the ESM. But I am also happy that there was an agreement on the main elements the budgetary instrument. Some could have wished for more. But if we are able to do more to achieve convergence and competitiveness in the different euro area countries, obviously that is very good for the resilience of the euro area. On the European Deposit Insurance Scheme (EDIS), like Commissioner Moscovici said, that I am also a bit disappointed that there was not more progress. But the route, the journey will continue.

I think it will be important one day to complete banking union, also with a deposit insurance scheme. On the ESM Treaty, for my institution, obviously the main event of last night - a lot of work has been going into this project. The difficult political decisions were reached last December at the Euro Summit. But to put these political agreements into legal language into a treaty text is not easy. That's why it took a while but now we have reached a result. As Luis [Rego, spokesperson for Eurogroup President Centeno] said, you will get the treaty later in the day when we have done a last legal check and it can go to the Euro Summit next week as was requested.

We have solved all the issues that were decided by the summit last year. The ESM will provide the backstop to the Single Resolution Fund (SRF). Again this was not easy because detailed questions had to be agreed - how to share information between the different institutions, so that the ESM can calculate the repayment capacity of the SRF; the decision-making process had to be defined because there's very little time when the backstop needs to be activated. So these are the reasons why it took a while. You will also find in the treaty the enhanced role of the ESM in crisis management, and if necessary, preparing new financial adjustment programmes together with the Commission, of course.

And as you heard me say many times, also our role outside programmes. There was also agreement how to make the precautionary credit lines more accessible so that it can be really an additional tool available in the euro area - that is useful when we look at the experience of the International Monetary Fund. They have comparable instruments, and the countries that have used these instruments, like Mexico, Poland, Colombia - they have confirmed to us that the use of this instrument without drawing money actually has been very helpful to overcome investors' doubts about the economic policies in these countries.

You will also find in the ESM treaty language on debt-related issues, how to deal with debt sustainability and the role of the ESM. So I think overall, this is real progress and for me, the glass is more than half full. Thank you.

As I said, the [budgetary] instrument is useful, because it deals with convergence and competitiveness – that is good, of course. The more we can do there, the better. But as everyone has said here this morning, it does not deal with the other issue, which from an economic perspective is also important for macroeconomic stabilisation. And I’ve said many times that this is another element that is missing in the architecture of our monetary union. For an economist, it’s very easy to see that this would be useful because countries that are members of a monetary union give up important policy instruments like monetary policy and exchange rate policy.

So fiscal is the other macroeconomic instrument that then might be useful from time to time, not necessarily every year. And also we don't have in the monetary union what keeps big economies like the US together. They have a common social security system, tax system, where you find automatic flows that go from weaker regions to stronger regions of that same country. And that leads to automatic stabilisation and make sure that different cycles, which also exists in the US, don't diverge too much. We don't have that. And I think that's another reason why it would be good to think about instruments to do that.

Many proposals are on the table. They can all be designed in a way that we don't have additional permanent transfers. I think economists understand that very well. But at the moment we have a situation where several member states don't agree that this is necessary and therefore we only got this far. But as was mentioned earlier, integration in Europe will continue. And I think in this sense it's very easy to identify what are the next steps. The common deposit insurance is one - we will move there. I'm convinced one day we will have it. I cannot tell you which year. And I'm also sure we will make progress one day on an instrument for macroeconomic stabilisation. That will happen, but the timing is unclear.