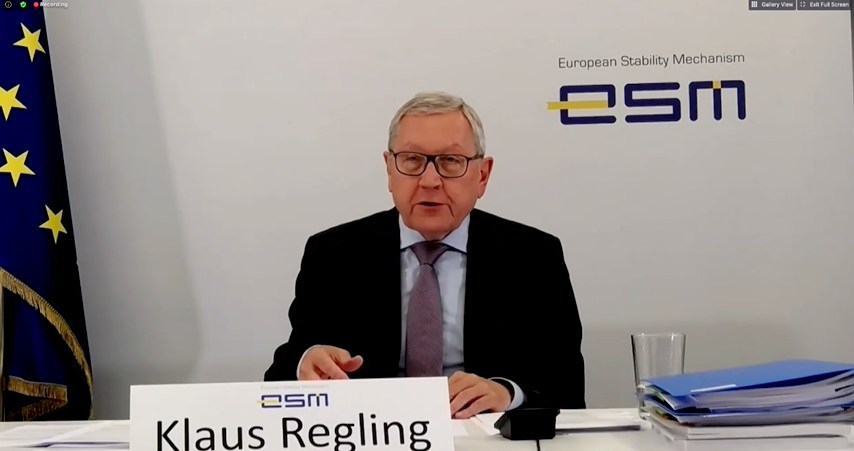 Good evening, we had a full agenda today, and it happens that three of the five countries that borrowed from the EFSF and ESM were on the agenda this afternoon. Starting with Greece, there you have now the statement that was adopted by the Eurogroup. The basis for the discussion was the sixth Enhanced Surveillance Report, where we came to an overall positive conclusion, despite the fact that there are some shortcomings that were identified. But it is a basis to release the next tranche of debt relief, €748 million, with two elements. First, the SNP and ANFA equivalent income - the next tranche. That is €644 million. You may remember that this in principle is available every six months in the same amount till the end of 2022. And importantly, this is a grant. It's not a loan. It's a grant that we collect from member states in a separate account and then transfer. So it's particularly valuable money for Greece.

The second element is the abolition of step-up interest margin of a part of the EFSF loan. And this amounts to €104 million for the first half of this year. All this is part of the medium-term debt relief measures that were agreed in principle by the Eurogroup in 2018. So this was the next tranche. The final agreement, the formal agreement will be done by the ESM Board of Directors, after national procedures have taken place.

The other two countries, Cyprus and Spain, it was the post-programme monitoring that we do, the ESM. We have to do our Early Warning System on a regular basis. Of course, both countries are affected by the pandemic crisis, the lockdown, and the necessary fiscal measures that need to be taken in response to that are putting public finances under pressure. But luckily, both countries, both Cyprus and Spain, had made very good progress in recent years after the earlier crisis early last decade. So they entered this new crisis from a position of strength. And that helps, of course, and we don't see any immediate risk for Cyprus or Spain being able to service their ESM loan.

A final word on the recovery fund that was discussed, as you heard. I was able to inform ministers that markets look at this very positively. I can see when I talk to markets that there is quite a significant shift in market attitude towards Europe in general. When the crisis began in February, March, there was a lot of concern and speculation. Some again, start talking about the end of the euro. Some even said this is the end of the European Union. We know that markets like to exaggerate. Now it's actually the opposite. Europe has come back in the view of markets. We see that. We see it whenever one of our member states goes to the market and issues bonds. Of course, this is also helped by the ECB policy.

But markets in general look at it very positively at what the ECB has done, and the first package put together by the Eurogroup in April amounting to €540 billion. Now, the proposal from the Commission on the recovery fund, all this together is seen as positive and also because it complements what is being done at the national level and it complements in an efficient way by giving more support to countries that cannot do so much themselves at the national level. All this is important to protect the single market and also helps the functioning of the euro area. But now, of course, it is important in the view of markets that this momentum is maintained and that the political level comes to agreements soon, also on the recovery fund. Let me end here.