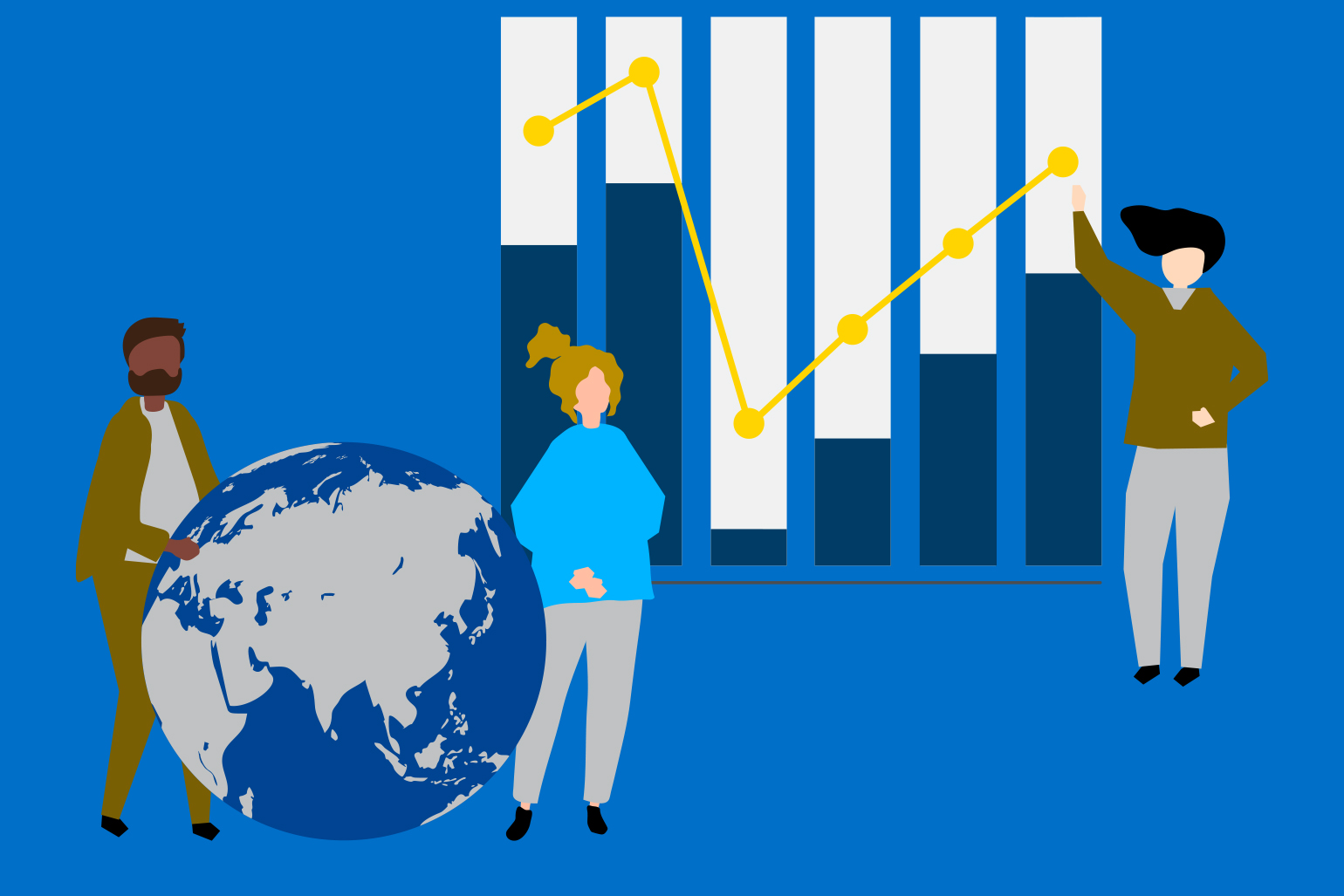 Covid-19 painfully hit Europe and Asia. Policymakers in both regions reacted swiftly to the unprecedented downturn with large rescue packages but with different policy actions. Chief Economists Hoe Ee Khor from AMRO and Rolf Strauch from ESM explain why.

The Covid-19 pandemic has resulted in more than 20 million confirmed infections worldwide and more than 730,000 deaths up to now. Countries in Europe and Asia have been severely affected by the pandemic and the subsequent economic crisis. The euro area was painfully hit by the epidemic in March and April, with almost 1.3 million confirmed cases so far (Figure 1). Since then it has managed to flatten the epidemic curve, though several countries are reporting a second wave of infections. Across the ASEAN+3 region, almost 500,000 cases have been confirmed.[1] Most countries have flattened the curves except for Indonesia and the Philippines and a second wave in Japan. 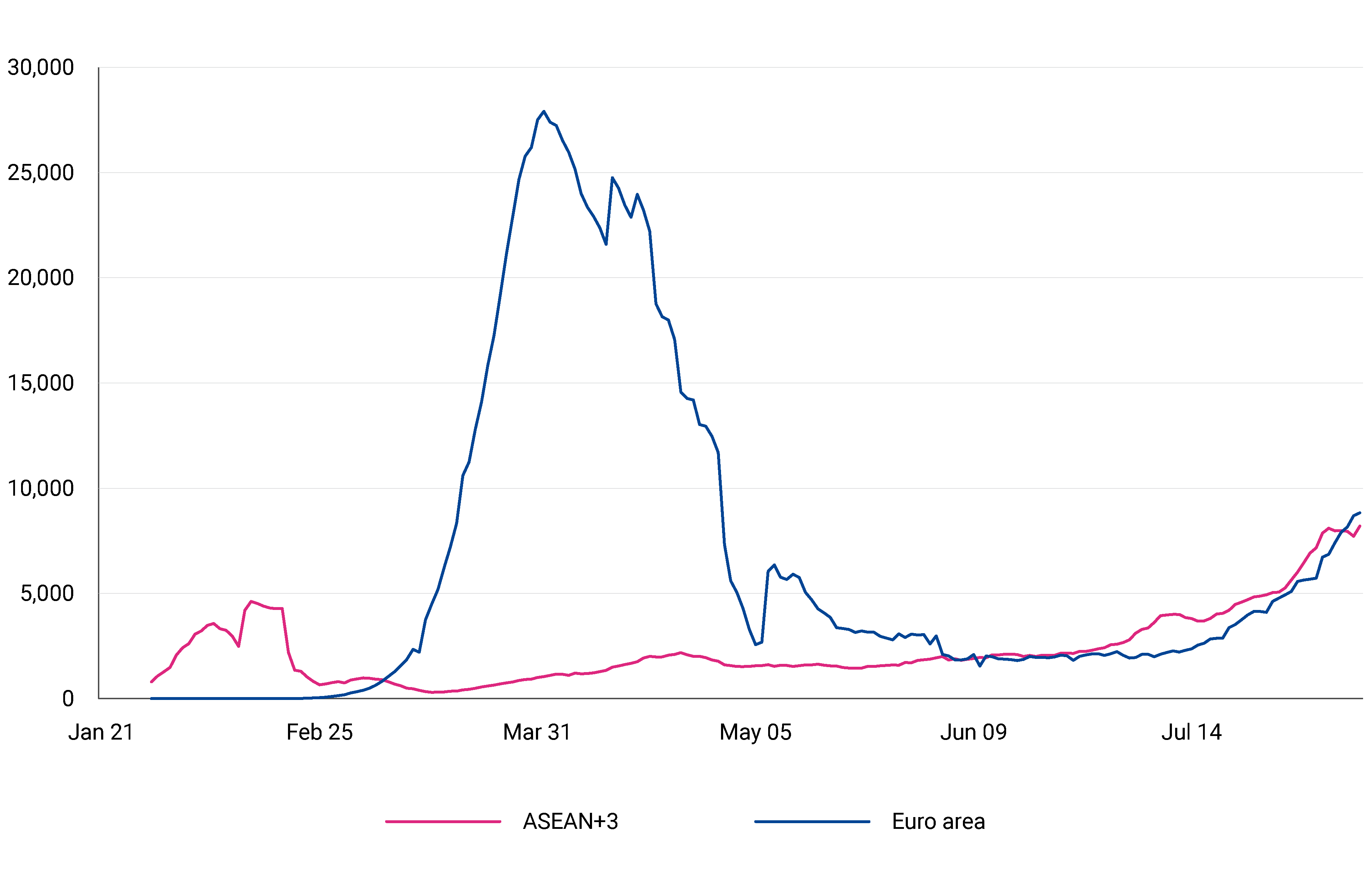 Source: John Hopkins University, own calculations. Note: The difference in the number of cases in the euro area and the ASEAN+3 region show up similarly when scaled by population or by health care capacity as measured by the number of hospital beds.

Economic activity in the euro area is expected to contract by 8.7% this year from 1.3% growth in 2019.[2] In the ASEAN+3 region, GDP growth in 2020 is expected to drop to 0.2% from 4.8% last year.[3] As Chief Economists at institutions overseeing financial stability in our region, we provide assessments of the impact of the pandemic on our shareholders and members, as well as policy advice.

In this blog, we note that while policymakers in Europe and Asia reacted swiftly to the unprecedented downturn with large rescue packages, their policy actions differ. Another difference is the important role of supranational agencies in Europe.

As an immediate euro area-wide response, the EU temporarily suspended its fiscal rules and applied more flexibility to its state aid rules and the rules governing the EU cohesion funds.

Work is now centred on the implementation of the new €750 billion Recovery Fund. The fund is attached to the new long-term EU budget, and is composed of €390 billion grants, and €360 billion loans. [5]

The temporary suspension of the EU fiscal rules was part of the EU’s concerted response to Covid-19 and allowed euro area countries to use expansionary fiscal policy to revive their economies. Similarly, policymakers across the ASEAN+3 region have deployed unprecedented economic stimulus measures to support their economies.

The overall fiscal and indirect financial measures (i.e. debt moratorium), are close to 29% of euro area GDP and 13% of GDP in the ASEAN+3 region.[6] In both regions, the size of the stimulus differs substantially across countries due to differences in their fiscal and financial space. Among the euro area, the size of the stimulus measures ranges from about 50% of GDP to a few percentage points. Similarly, in the ASEAN+3 region, the size ranges from 40% of GDP for Japan, to about 10% for the other economies.

Differences in the overall size of the regional crisis response are first explained by the use of guarantees to support firms (Figure 2).

For the euro area, the discretionary budgetary measures amount to 5.3% of GDP, while tax and social security deferrals sum up to 2.1% of GDP.[7] These measures are backed by an unprecedented amount of guarantees and liquidity facilities of almost 22% of GDP, mostly to support corporates and SMEs.

Across the ASEAN+3 economies, the policy mix differs considerably. At the regional level, discretionary fiscal measures average 5.1% of GDP, which are backed by liquidity support schemes averaging 5% of GDP and include temporary debt relief and moratoriums. Tax and social contribution deferrals add another 2.5% of GDP. The stronger reliance on guarantees in the euro area channel liquidity through the banking system into the economy.

Second, differences exist in the way household income is supported. In both regions, discretionary measures targeted the immediate needs of the health care system and epidemic control early on. In helping households and workers, the use of direct income support schemes have been effective in many ASEAN+3 economies. Wage co-payments to support employment were less widespread. By comparison, job retention schemes, operating through short-time work compensation, are among the most prominent crisis responses among euro area countries.

The contrast in discretionary fiscal measures across the two regions reflects the difference in economic structures, such as larger social security systems in euro area countries, and a larger informal economy (i.e. not regulated or protected by the state) as well as more flexible labour markets in many ASEAN+3 countries.

Thirdly, these structural differences can be observed in the size and operation of automatic stabilisers, e.g., through taxation and the extended coverage of unemployment and social benefits. In the euro area, their role and significance is prominent and they are estimated at around 5% of GDP. By comparison, the role of automatic stabilisers is more limited in most ASEAN+3 economies, estimated at 1.1% of GDP (Figure 2).

Figure 2. Estimates of economic stimulus and automatic stabilisers in the euro area and ASEAN+3 (% GDP) 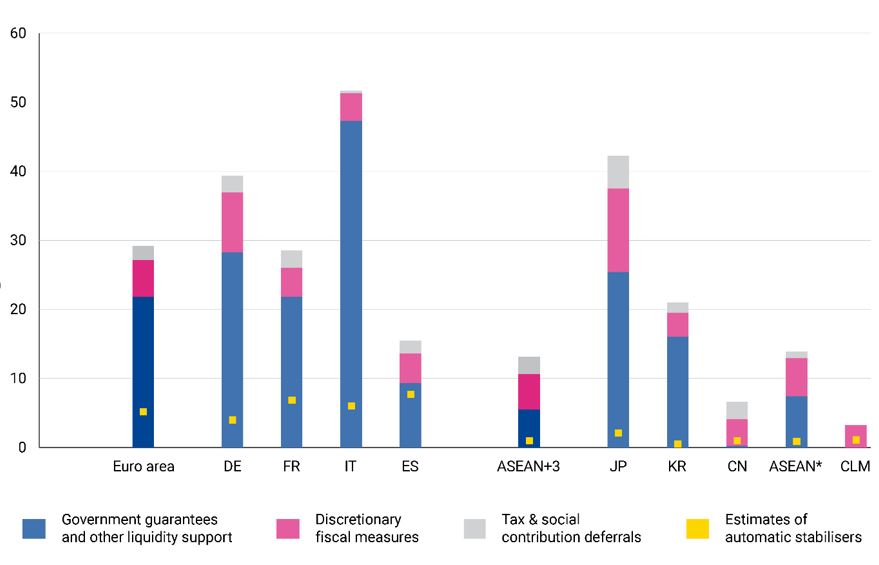 Source: National authorities, ESM and AMRO staff calculations. Note: *selected ASEAN economies: Indonesia, Malaysia, Singapore, Thailand. The ASEAN+3 average excludes Brunei Darussalam, Cambodia, Lao PDR and the Philippines for which no breakdown of measures is available. For the CLM economies (Cambodia, Lao PDR, Myanmar), the column shows the overall economic stimulus. The figure shows estimates expressed as percent of 2019 GDP with a cut-off date of 15 July 2020. The size of the discretionary measures, deferrals and government guarantees and liquidity support schemes refer to the announced measures and do not capture the effect of these measures on the fiscal balance for fiscal reporting purposes. At this early stage, it is also assumed that none of the discretionary measures announced falls under the automatic stabilisers.

The European Central Bank (ECB) reacted swiftly to the economic fallout by adopting an extensive set of measures based on a substantial €120 billion expansion of its asset purchase programme. In addition, the ECB boosted the volume of purchases and widened eligibility with the new temporary €750 billion Pandemic Emergency Purchase Programme, which was further enhanced by €600 billion, reaching a total envelope of €1.35 trillion. The horizon of this programme was extended to at least June 2021. Further, the ECB took actions to ease the burden on the banking sector and to keep credit flowing included long-term financing for banks. It eased collateral requirements and increased the flexibility in the use of banks’ capital and liquidity buffers.

The Covid-19 pandemic is a health crisis posing multiple threats and calling for an immediate need for massive policy response in the euro area and the ASEAN+3 region to preserve lives, jobs and businesses. The extent to which governments and financial systems built up buffers differed across and within Europe and the ASEAN+3 region when the pandemic hit. Some policymakers had less room than others to mitigate the impact of the pandemic. Moreover, the institutional framework and the economic structure of economies in the two regions led to differences in policy responses.

ASEAN+3 countries, despite their economic heterogeneity, mostly resorted to discretionary measures to support workers and the most vulnerable sectors of the economy. The central banks in emerging markets and developing economies cut policy rates and injected liquidity.

Central banks in advanced economies on the other hand, including the ECB, constrained by their interest rate setting, responded with quantitative measures to support their economies and ensure the orderly functioning of the financial markets. In addition, some euro area-wide initiatives aimed to alleviate the risk of economic divergence within the euro area because of the crisis.

It remains uncertain when the pandemic will be contained and what further stimulus may be needed. Future downside risks include a prolonged pandemic and a second wave, which could lead to renewed lockdowns, another economic downturn, and increased fiscal pressures. Ultimately, there is a need to transit from current emergency measures into more sustainable policies to safeguard long-run economic prospects in both regions.

This blog post was published as an  op-ed in Project Syndicate  and also appeared on AMRO’s blog.

We thank Anne Oeking (AMRO) and Georgios Palaiodimos (ESM) for their valuable contribution and input to this blog.

[1] The ASEAN+3 region comprises the ten ASEAN economies (Brunei Darussalam, Cambodia, Indonesia, Lao PDR, Malaysia, Myanmar, the Philippines, Singapore, Thailand, and Vietnam) as well as the Plus-3 economies (China, Japan, Korea and Hong Kong, China).
[2] European Commission (2020), Economic Forecast Summer (Interim).
[3] AMRO (2020), Update of the ASEAN+3 Regional Economic Outlook (AREO) – August 2020.
[4] Discretionary measures refer to changes in budgets resulting from policy decisions and changes in laws, statutes and administrative practices. These can have short-term and very lasting impacts, for example, when they affect pension systems. Instead, automatic stabilisers are changes in tax revenues and spending, which emerge quasi automatically from changes in economic activity. Among others, corporate taxes decline if firms earn less and payments for unemployment benefits go up when unemployment increases.
[5] Special meeting of the European Council (2020), Conclusions
[6] This figure does not incorporate automatic stabilisers.
[7] In this category, measures do not include deferrals in the form of debt repayment moratorium.